I barely expected Stadia to work. Stadia is Google's attempt to make cloud gaming happen, and the company has promised a lot: the ability to play basically any game at up to 4K on your TV, phone, tablet or laptop, with no lag and on existing internet infrastructure. And, based on these broad qualifiers, Stadia delivers.

The other night, my partner was playing Overwatch on our PS4, so I picked up my phone and jumped into a public event in Destiny 2. I've loaded up Mortal Kombat 11 and Gylt in seconds on my laptop, and I've played Just Dance 2020 on a Chromecast Ultra. Stadia makes all of this possible without a gaming console -- but that doesn't mean hardware isn't important here.

To access Stadia at launch, you need either the $130 Founder's or Premiere edition, which each comes with a specially updated Chromecast Ultra and an official controller. The Stadia gamepad is simplistic, with rounded edges and fat, springy triggers. It's entirely functional, often fading into the background as I play, which is precisely what a good controller should do. Bluetooth gamepads like the DualShock 4 and Xbox One Elite also work with Stadia on laptops and phones, but not the TV. 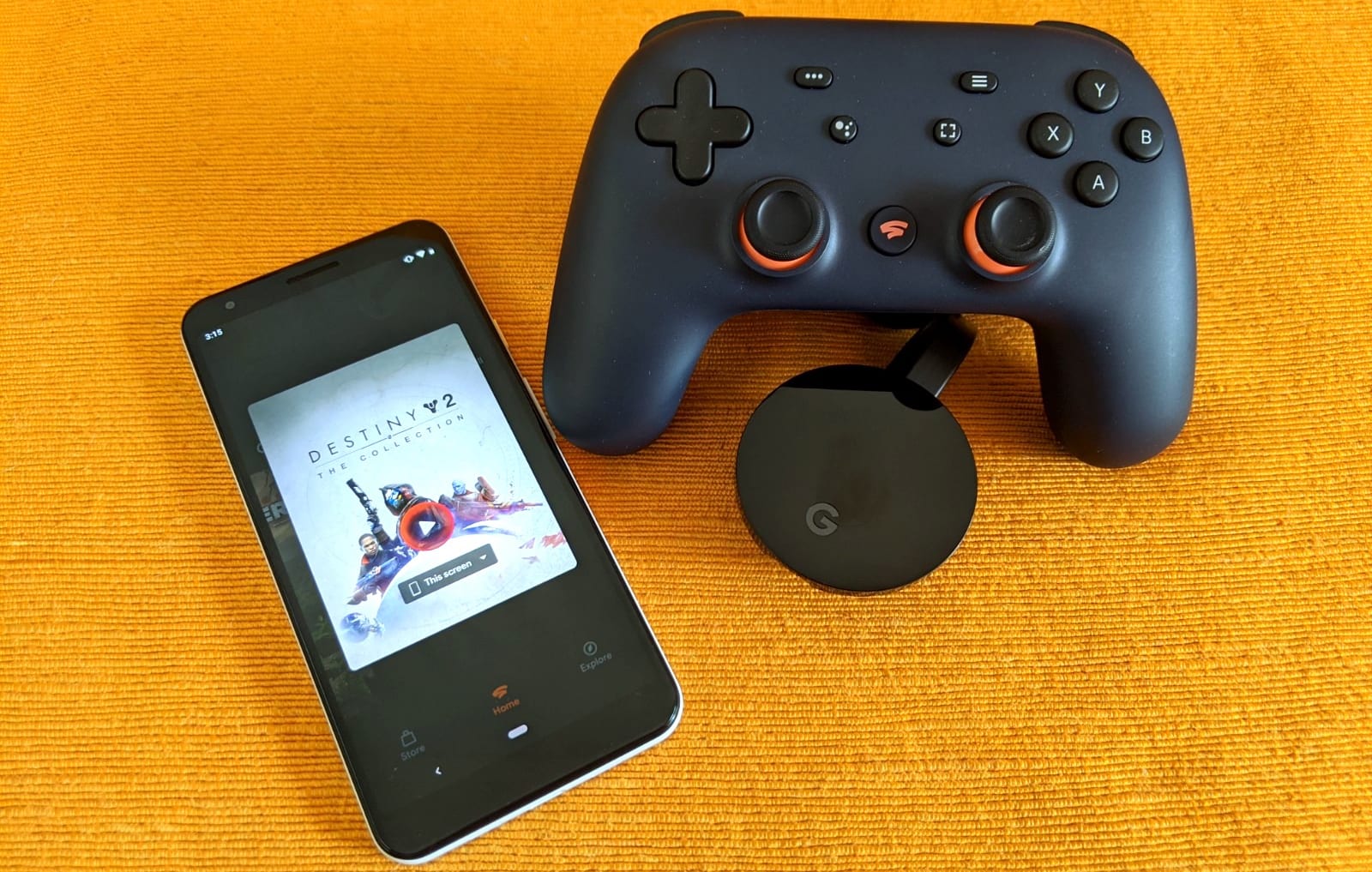 The Stadia controller connects to the Chromecast Ultra via WiFi, enabling untethered gameplay in the living room. To play on a phone, tablet, laptop or PC, the official gamepad has to be physically plugged in (for now).

The first Stadia game I booted up was Destiny 2 on the Chromecast Ultra. The title screen loaded quickly and I created a new character; the process felt so smooth and familiar that I forgot I was playing a AAA, online game on a streaming puck the size of a Thin Mint.

But then, I started shooting. The lag was immediate.

It took a few shots for the game to catch up with the action, but it eventually smoothed out and I carried on killing aliens. Destiny 2 continued to stutter and suffer from input lag every now and then -- especially when people in my neighborhood began coming home -- but it wasn't pervasive enough to destroy the fun of Destiny 2. The same goes for Mortal Kombat 11 on the phone and Gylt on the laptop. In my time with each title, resolution dipped every now and then, and some button presses would trail behind the on-screen action, but overall, they performed like console-quality video games.

I wouldn't play any of these titles competitively on Stadia, but the service is fine enough for a relaxing evening. 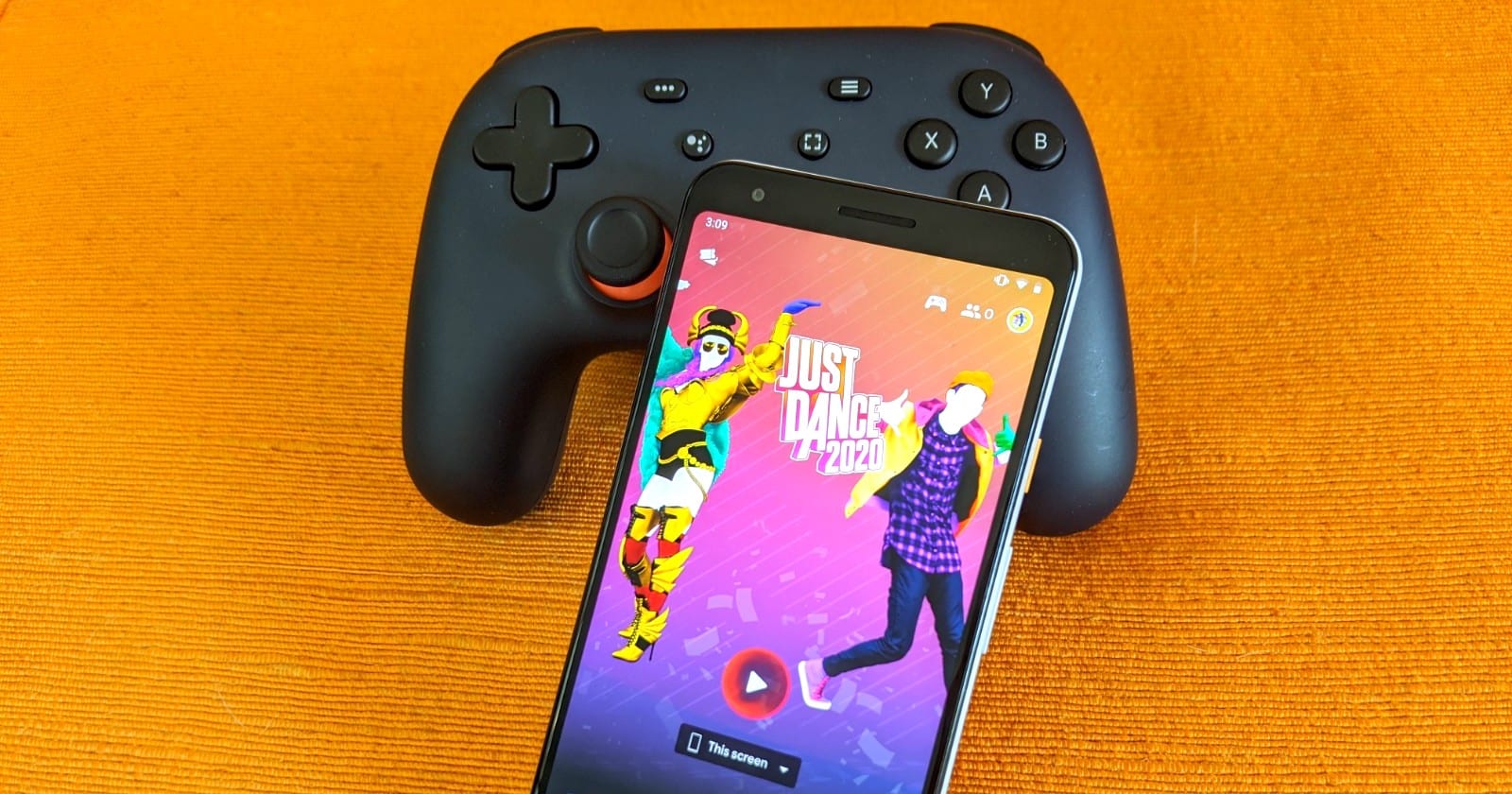 At least, that's how it works in my home. Since Stadia operates via WiFi (not mobile data -- we'll get to that in just a minute), the experience is going to differ drastically for each user, depending on their connectivity situation. At home, I generally clock download speeds of 30 to 40 Mbps, when Google recommends 35 Mbps for 4K play and 10 Mbps for 720p. I can test Stadia at my house until I'm blue in the face, but this doesn't say much about how the service will actually work for all of you. All it says is that Stadia can work, when provided the proper circumstances.

When Google revealed Stadia, it promised a world of internet-powered, 4K game-streaming magic. It even talked about 8K streams. However, its actions since Stadia's debut have undercut many of these promises.

Let's run through a few: Existing Chromecast Ultras won't support Stadia right away. Those $130 pre-order shipments will be staggered, further limiting the number of people who will actually be able to play on launch day, November 19th. In terms of the Stadia gamepad, wireless play only works on the TV. Stadia is available only on Pixel phones -- and even then, it can't function over mobile data (told ya). Other promises that Google made about Stadia, including the ability to share games and invite friends to join the service at a reduced cost, have also been delayed.

It's not enough to make these titles streamable under ideal conditions.

Essentially: Stadia works. With a stable internet connection, proper equipment and very few other players online, Stadia streamed Destiny 2 to my phone. It made Shadow of the Tomb Raider run on my MacBook Pro, and it let me play Mortal Kombat 11 on my TV without a dedicated game console. They all loaded quickly, and they were free from game-breaking issues. For me, Stadia was a pleasant surprise.

However, it's not enough to make these titles streamable under ideal conditions. For Stadia to stick, the cloud-gaming experience has to function without frustration for the majority of people who log on. Meanwhile, the United States government and private companies are still attempting to establish broadband for tens of millions of people across the nation without reliable internet access. The most powerful internet pipeline, fiber-optic, isn't even available in 70 percent of the country.

Stadia's success rate will vary depending on every player's hyperlocal internet conditions. That's not undue fearmongering; it's just how the service operates.

Google has limited the size of the access pool with every move since revealing Stadia.

This is why Google has limited the size of the access pool with every move since revealing Stadia. The system is fragile and new and likely can't handle a rush of players all at once. So, instead of going live with an online subscription service that works with existing devices and mobile data, Google has jacked up the price of admission, delayed the ability to invite friends, and made hardware a key, restrictive component of a service that's supposed to be all about the cloud.

Game streaming is finally viable, and Stadia is leading the charge -- but with this launch, it's turning out to be more of a stroll. Hey, at least we're getting there.

All products recommended by Engadget are selected by our editorial team, independent of our parent company. Some of our stories include affiliate links. If you buy something through one of these links, we may earn an affiliate commission. All prices are correct at the time of publishing.
View All Comments
Google Stadia hands-on: Shockingly playable