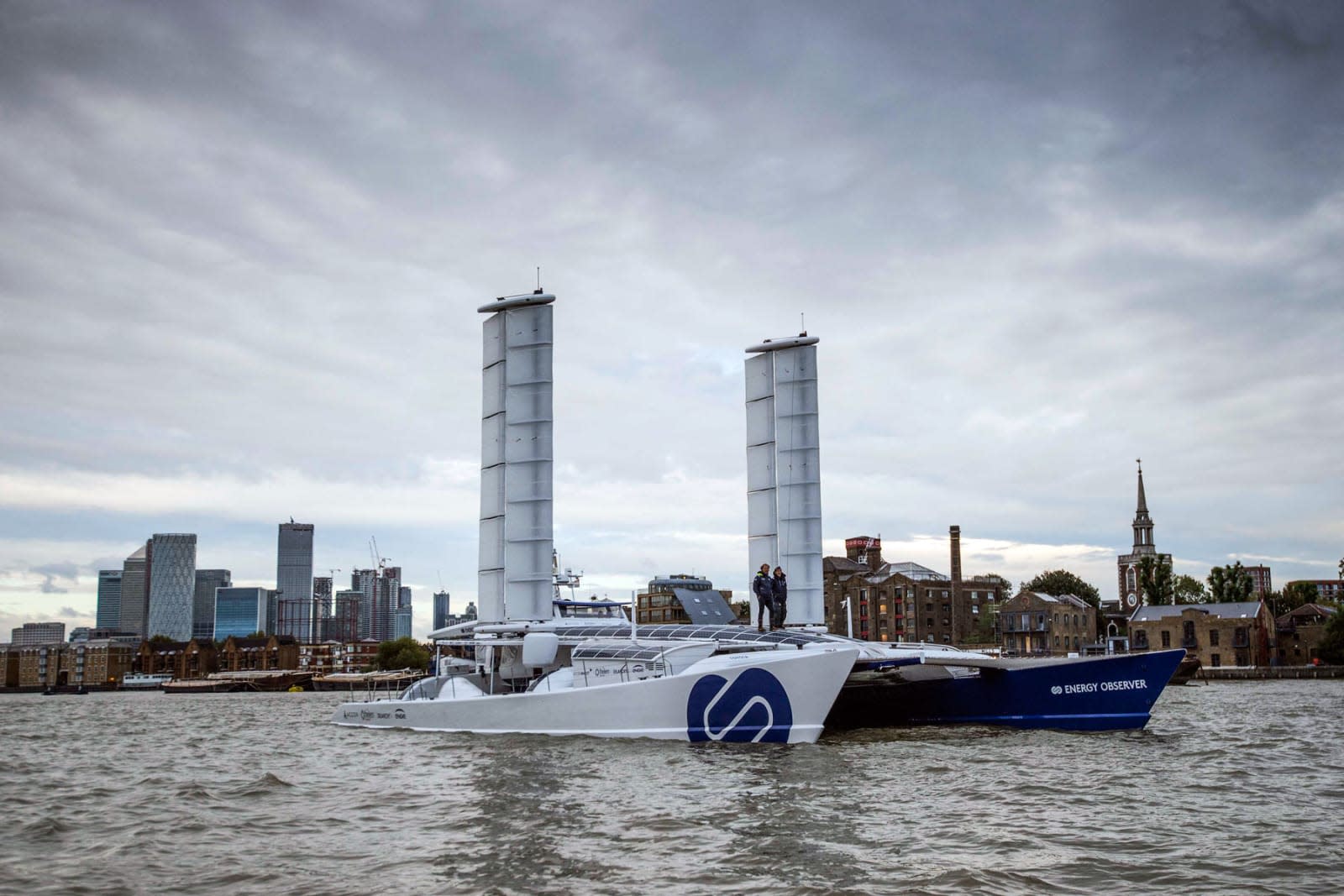 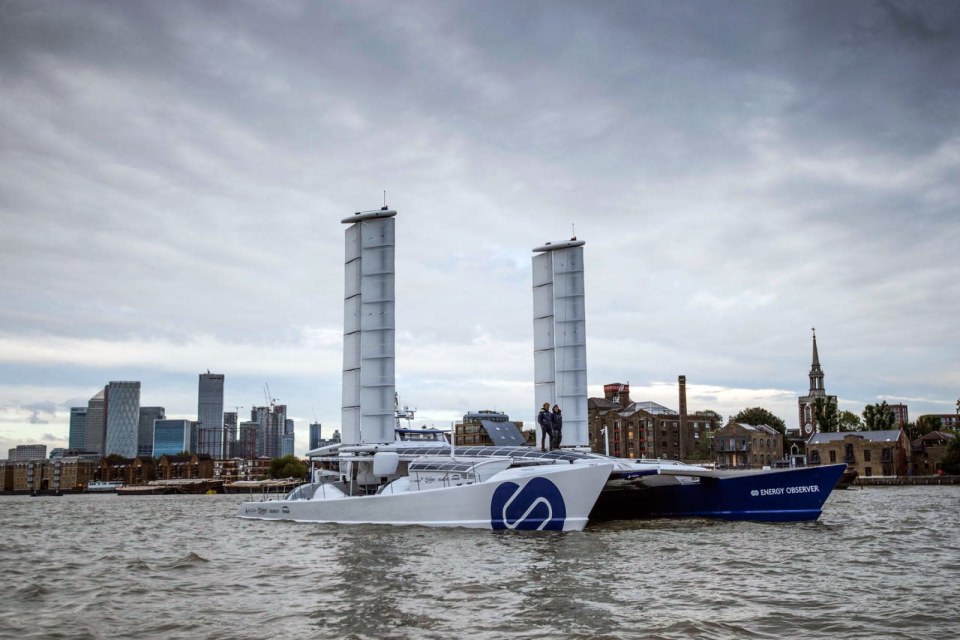 Energy Observer is a vessel powered only by energy that it generates itself, be it the onboard solar panels, wind turbines or a hydrogen fuel cell. It's a floating laboratory, PR stunt and clean-energy evangelist all at once, showing how the future of transportation could be. Halfway through its six-year journey around the world, the vessel stopped in London so we could learn what's happened since its voyage started.

"We test and mix a number of different [energy-generation] technologies, but the secret is in the mix," explained project manager Louis Noël Vivies. The vessel is covered in 168 square meters of solar panels, both laminated onto the shell and in rigid racks over the hull. The latter are double-sided, too, to pick up light reflected from the surface of the water. At peak output, the panels catch 28kW of power, enough to keep the on-board batteries charged.

There is 126kWh of batteries on board: 100kWh for the motors, and a further 26kWh for crew comfort. That includes light, heating and the ship's labor-saving devices, including a coffee machine, dishwasher and washing machine. The 100kWh battery supplies two 45kW propellers that can push the boat around at a top speed of 11 knots per hour.

When the batteries drop below 60 percent, the hydrogen fuel cell kicks in, replenishing the lost power to ensure continuous running. It's here, as a way of bridging the gaps inherent in using renewables, that hydrogen makes plenty of sense as a power source. And using hydrogen to power a boat is pretty logical, since there's an (apparently) inexhaustible supply of it in the water.

To do this locally, the EO is equipped with a desalinator, electrolyzer and a compressor. The water needs to be purified before having its hydrogen and oxygen separated, with the former being stored in a 62kg tank under 300 bar pressure. According to Vivies, 62kg worth of hydrogen is capable of running the ship for "three days, including creature comforts."

Except, for the first three years of the Energy Observer's journey, this extraordinary ability to synthesize its own fuel has had a fatal flaw. It doesn't work while the vessel is at sea, only when it's docked, when it could theoretically secure new fuel anyway. That's because the electrolyzer uses 25kW of energy, almost all of the boat's total output of 28kW. Do this at sea and there wouldn't be any power left over to propel the boat and keep the crew alive and warm.

This is going to hopefully change for the EO's 2020 tour (it docks every winter) when it sails across the Atlantic. The boat is expected to get new solar cells, increasing its peak output from 28kW to 32kW -- hopefully enough to run the electrolyzer while in motion. This upgrade has the potential to change how the boat operates, allowing it to stay at sea for much longer at a time.

If the EO can successfully transition toward using hydrogen as a power source, it'll get a lot faster, too. The ship's captain and project founder, Victorien Erussard, went to great pains to point out that the 100kWh batteries weigh 1,760kg. By comparison, the hydrogen systems are 1,700kg, and yet the energy potential for the latter is closer to 1,000kWh.

One of the ship's major backers is Toyota, which sees it as a key plank of its strategy to sell the world on hydrogen-powered vehicles. It believes that, eventually, the world will come around to its thinking on the benefits of hydrogen over electricity. Which is part of the reason Toyota hasn't really gone hard on building a dedicated EV over hybrids.

At the EO's London event, Toyota took the opportunity to remind the world that it has sold close to 10,000 of its hydrogen-powered Mirai cars. The bulk of those sales are in California and Japan, where the incentives and infrastructure to support hydrogen pumping are most prevalent.

Progress is slower in other countries as it waits for areas to build more gas stations to spur adoption. As we reported last year, however, the role of hydrogen in cars is going to be far smaller than it is for heavier vehicles. The lighter weight of hydrogen gear, coupled with its energy density, makes it a smart solution for trucks, trains and ships, more than small cars.

When the EO first launched, it also toted a pair of wind turbines designed to generate additional power at sea. In 2019, those were ditched in favor of a pair of sails -- although the team prefers you call them OceanWings. A strong, waterproof cloth drapes over two carbon fiber pylons which robotically unfurl to create extra lift in favorable conditions.

Rather than increasing top speed, the OceanWings' design should make the EO more power efficient. Vivies says that it's possible to limit the power consumption of the boat to 11kW to help new crew members understand its mission. If someone wants to use the coffee machine, the boat will divert power from the motors, to show them that "everything has a cost."

The OceanWings, as well as the ship itself, are fully autonomous, making it very easy to sail. Vivies explained that merchant sea crews are not interested in the finer points of race sailing and lack the experience to operate sails properly. By automating the process, it reduces the length of training time required before they can implement these systems.

The EO's team shared data about how much energy the boat consumed and generated as part of its trip from St. Petersburg in Russia on June 17th to Spitsbergen in Norway on August 10th. During the 24-day jaunt, the boat produced 9,160.8kWh of energy, 52 percent of which came from the sun. The OceanWings "contributed" 42 percent, around 3,717.82kWh, in terms of the aerodynamic aid it offered the boat. And the remaining six percent was from hydrogen. Of the total power, 59 percent propelled the boat, with the remaining 41 percent going to life support.

Next year, beyond the new solar cells, the team is exploring other ways for the ship to become more self sufficient in future. With a supply of pure water and oxygen from the electrolyzer, it may be possible to run a hydroponic garden on board. Admittedly, at sea, the options may be limited to some green vegetables, but should the world flood, Waterworld-style, it could be better than nothing.

Unfortunately, in an era when we need systemic change to avoid a climate catastrophe, the Energy Observer won't be enough to blaze a trail towards greening up aquatic transport. While the IPCC says that we have just over a decade to dramatically slash our carbon emissions, the design and implementation of the systems here are far too customized to retrofit onto dirty hulking container ships crossing the world.

Vivies himself said that the EO team's next goal is to sell hydrogen generators to one-percenters looking to green up their pleasure yachts and while it's proof that sustainable water transport is possible, at this level, nibbling around the edges of green energy isn't going to cut it.

In this article: Climate Change, Energy Observer, gear, green, Hydrogen, Renewables, Research, Shipping, Solar, tomorrow
All products recommended by Engadget are selected by our editorial team, independent of our parent company. Some of our stories include affiliate links. If you buy something through one of these links, we may earn an affiliate commission.