i Interaction EASE tells you what you’re looking at.

BMW thinks that we'd like to interact with our cars in a more humane way than we do today, engaging them in conversation. But that's never just using words, but with gestures, body language, and our gaze, which we use to convey meaning to one another. That's why the company is showing off the BMW i Interaction EASE, a concept windshield for self-driving cars that actually analyzes our nonverbal signals to help us get more out of traveling.

Similar to its offering last year, BMW's concept suggests a windshield that's overlaid with a transparent display, which allows data to be overlaid onto the road. This augmented reality would then offer up descriptions and contextual information of nearby objects, buildings and signs. Eye-tracking sensors inside the car will follow your gaze and display more data about the thing that's captured your attention. If you want to interact further, however, you just need to gesture toward the item, which will offer up more options on screen.

There are three modes that i Interaction EASE can be put into: Explore, Entertain, and Ease. In the former, data about the local area is overlaid in their line of sight, telling you about a nearby cinema or restaurant. Raising your hand, then, would offer up local screening times, the menu, or reservation options.

Entertain Mode, meanwhile, would use the overlay to play movies on the windshield, with the rest of the cabin dimmed for ease of viewing. Then there's Ease Mode, which puts the car's seats into "zero gravity" mode, reclining them by around 60 degrees. The windshield would be darkened, and the surfaces of the car would become opaque, so that the occupant feels "as if they are almost floating."

All of the data to power this requires 5G, and BMW says that the 2021 iNext will be the first of its vehicles to support the connectivity standard. In addition, that car will also have some form, albeit not as sophisticated, of the augmented reality overlay demonstrated in the i Interaction EASE concept.

The other interesting component coming out of i Interaction EASE is the sound, created in partnership between BMW's Renzo Vitale and composer Hans Zimmer. The Inception, Sherlock Holmes and Going for Gold scorer helped create a suite of sounds that, in Vitale's words, "supports the unique BMW experience."

At CES 2020, BMW is also showing off how Zero Gravity mode would work in the real-world, and has fitted out a trio of X7 SUVs with its own ZeroG Loungers. The loungers can be tilted by 40 or 60 degrees, and is designed to offer more relaxation and comfort without compromising on safety. Consequently the safety belt has been redesigned to fit more comfortably, and even comes with a smartphone charging cradle.

Finally, the company is exploring ways to make its future generations of electric vehicles nicer places to be. That's why it almost completely gutted 20 i3s to create the BMW i3 Urban Suite, which is designed as a hotel suite inside an electric vehicle. Only the steering wheel and driver's seat has been left untouched in this radical redesign of the i3's cabin. 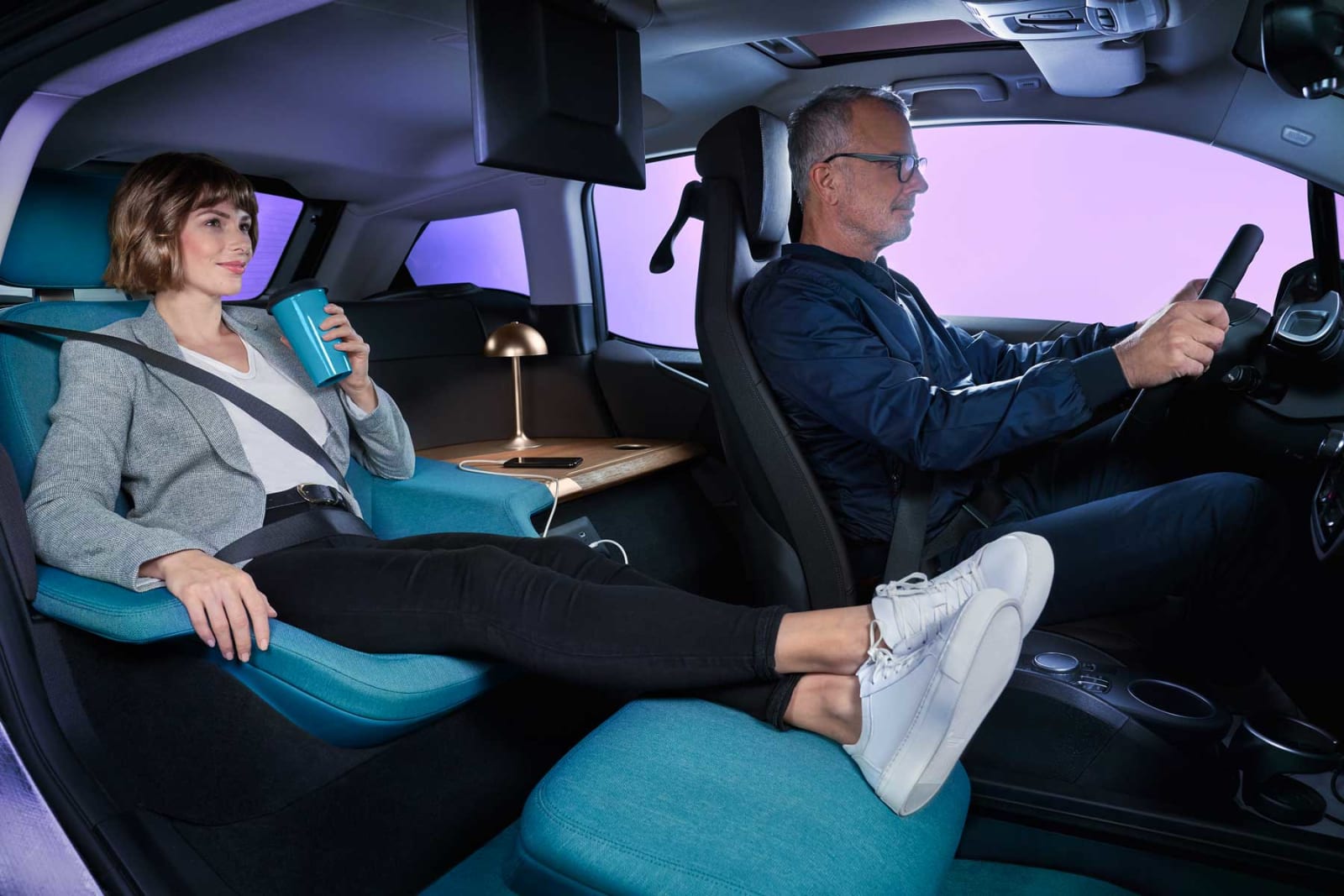 The passenger seat has been pulled out, as has the rear bench seat, making space for a side table (behind the driver) and a large recliner seat that stretches the length of the car. BMW says that it wanted to create an "inviting space" where you could spend time with "the relaxed feel of a boutique hotel." As well as the comfy chair and footrest, there's a personal sound zone and a flip-down screen to watch TV on the go.

BMW made a big deal about the use of sustainable materials to create the Urban Suites, which are being driven around Las Vegas this week. The seats are made from recycled materials, there is certified wood, olive-tanned leather and recycled floor mats, among other things. Since there's only one seat for a passenger, the focus is entirely on their comfort, including a thermoelectric cup holder to keep their drink warm.

Naturally, the point of this demonstration is to show the potential of how we could relax in our cars when Level 4 and 5 autonomy are commonplace. It certainly may not be the most practical car layout in the modern world unless you have a very understanding chauffeur. And if you and your significant other are just taking turns in the big recliner, then that may cause the odd argument.