This is how Microsoft is courting developers.

Microsoft surprised everyone with the Surface Duo and Neo last fall, dual-screen devices that gave us a glimpse at the next generation of phones and PCs. At the same time, the company introduced Windows 10X, a new OS variant made for dual and foldable screens. But after that initial rush of news, Microsoft went quiet, presumably to actually start building these new experiences. Now, after releasing an SDK for the Android-based Surface Duo, the company is finally letting anyone jump into the world of dual-screen Windows 10X apps with a new emulator and tools. 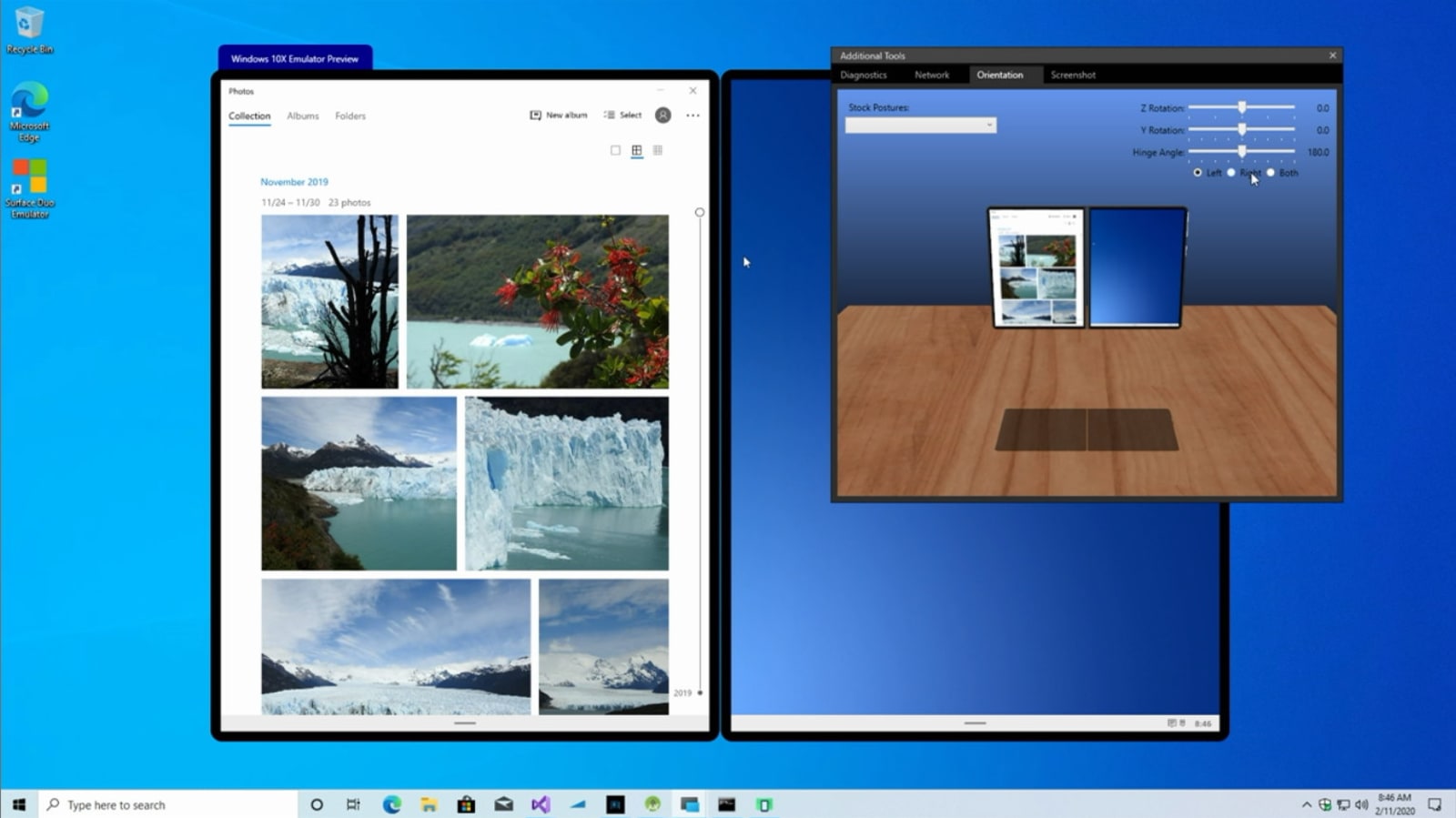 Microsoft is kicking off its Developer Day today with a session dedicated to dual-screen experiences, which will dive into all of the potential benefits of having a second screen. As we saw during the Surface Duo and Neo event, the company says you can use a pair of displays to create an expansive workspace that spans across both screens. But apps can also use them in more interesting ways. The Mail app in Windows 10X, for example, puts its tools and message list on one display, while the actual emails show up on the other. And of course, there's room for true multitasking by opening up two apps side-by-side, something that's incredibly difficult with a single mobile screen.

Microsoft describes Windows 10X as an "expression" of Windows 10, which is very careful language that's meant to keep it apart from the full capabilities of its desktop OS. One change you may notice is new app restrictions: Every Windows 10X app runs in a container to keep it separated from the core OS. Microsoft says it's doing this to help with security and performance -- it can also keep naughty apps from messing with your registry. But this restrictive mode might lead to issues with older Windows apps. It's up to developers to make sure their programs actually work with 10X. 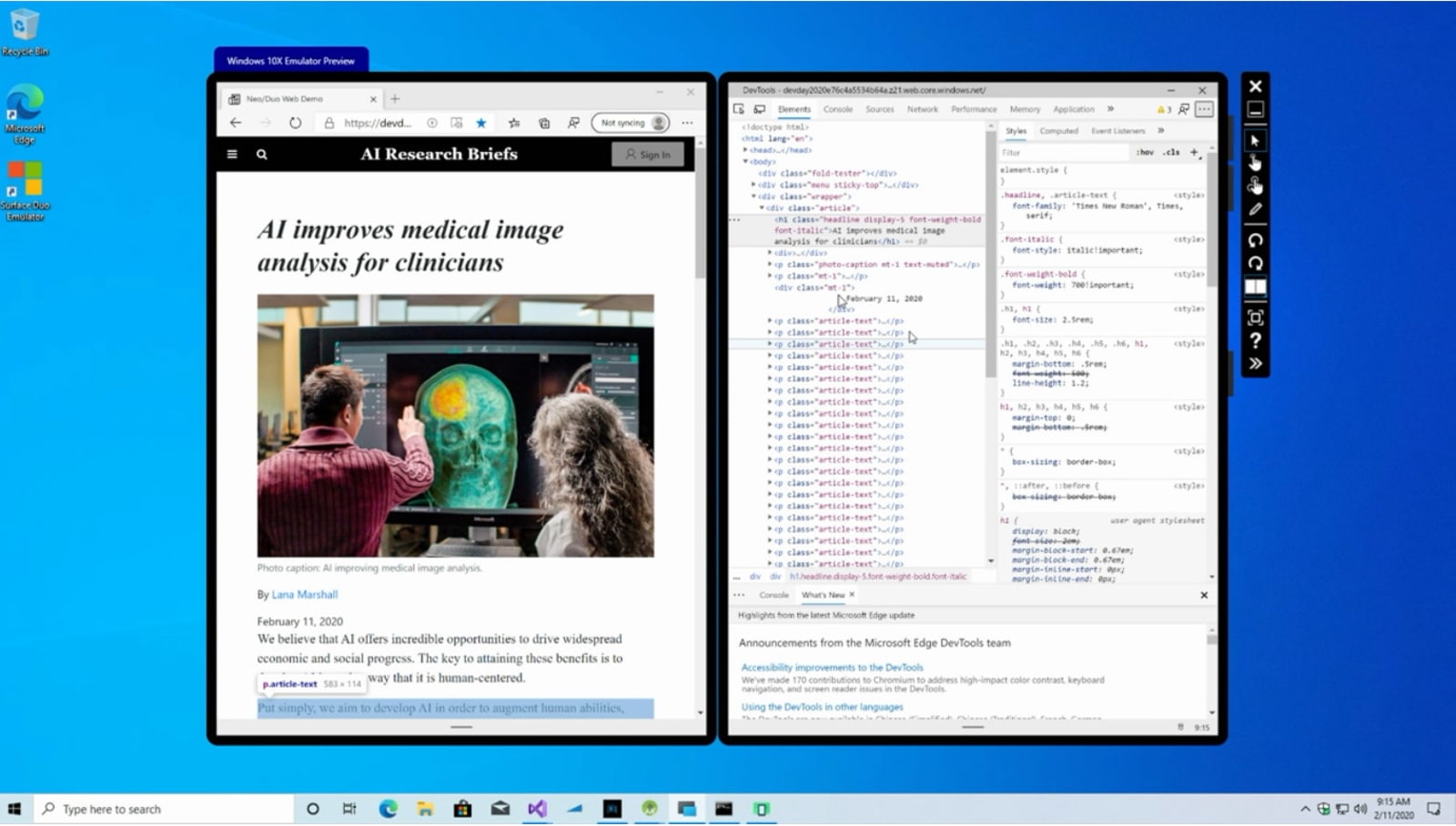 The company is also proposing new Javascript and CSS functions to let web apps work across two screens, and it also plans to add its own development work to the open source Chromium project (which it's also using for the new Edge browser). Microsoft isn't leaving other development environments out in the cold either, it also showed off a dual-screen SDK for Xamarin.Forms and new preview modules for React Native.

Why does all of this matter? If Microsoft doesn't actually get developers on board with its dual screen ambitions, Windows 10X and those new Surface devices will basically be dead on arrival. And the timing is pretty tight, as the company still expects the first 10X devices to land by the holiday season. In addition to the Surface Neo, we expect to see Lenovo's ThinkPad X1 Fold, as well as devices from Dell, HP and ASUS.

Remember that that iPhone only truly took off once Apple opened the App Store, which created a new ecosystem for mobile software. The lack of developer support is one reason why Android tablets have floundered for so long. These new tools show Microsoft is actually trying to meet developer's needs. And, surprisingly enough, the company also isn't forcing them to rely on its app store for distribution. If a developer chooses, they can offer their dual-screen Windows 10X apps over the web, just like a standard Windows app.