Realme may be the lesser-known spin-off from Oppo, but thanks to its aggressive pricing and the occasional collaborations with design icon Naoto Fukasawa, it's been doing quite well in Asia. And just last month, the company brought us the Realme X50 which happens to be the most affordable phone with a 120Hz display; not to mention that it's also a mid-range 5G device. So what's next? The Realme X50 Pro, of course.

Unsurprisingly, the "Pro" here is mainly referring to the Qualcomm Snapdragon 865 chipset, which is the staple for practically all 5G flagships so far this year. This means the phone will connect to more 5G bands (including Europe and India, where it will also launch) to take full advantage of its 360-degree surround antenna. Likewise, you'll get to enjoy WiFi 6 connectivity here. Another bonus with this chipset is the speedy LPDDR5 RAM stacked on top of it, which ensures the phone will respond quicker in general.

Other "Pro" bits include better cameras, Dolby Atmos stereo speakers, a beefed-up in-display fingerprint reader, an improved vapor-cooling system and 35-minute, 65W "SuperDart" flash charge (it's basically a rebranded version of Oppo's "SuperVOOC 2.0"). These are all packaged into a low-profile "Moss Green" or "Rust Red" body, featuring a smooth frosted glass back which shows a subtle metallic shine at certain angles.

Oddly enough, Realme kind of went the opposite direction with the X50 Pro's 1080p display. Rather than keeping the X50's 6.57-inch 120Hz LCD (from JDI and BOE), the Pro model has to make do with a smaller, slower 6.44-inch 90Hz Samsung AMOLED panel. While some may be disappointed by the lack of a 120Hz AMOLED panel, this was most likely a price-conscious decision made by the brand. Not that this is a bad thing, mind; 90Hz AMOLED is already a noticeable upgrade for most people, and we liked it on both the OnePlus 7 Pro and the Oppo Reno Ace.

The X50 Pro maxes out at 12GB of LPDDR5 RAM with 256GB of UFS 3.0 storage. It comes with a 4,200mAh battery along with the usual NFC (Google Pay friendly), dual-SIM tray and dual-mic noise cancellation. But nope, no headphone jack here. 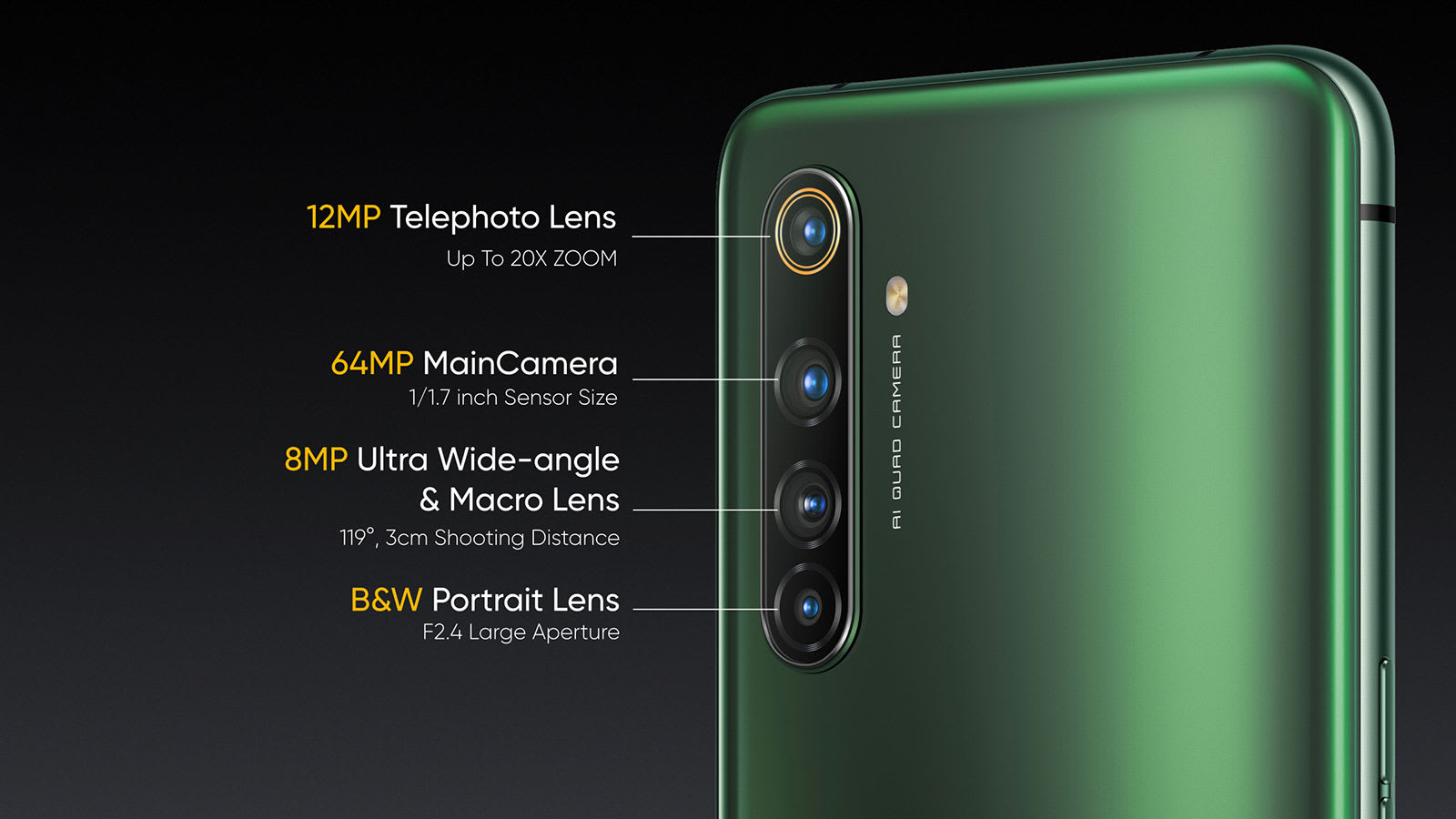 Much like the X50, the X50 Pro has a set of quad cameras on the back and dual cameras for selfies, but with a slightly different set of sensors and optics. The rear group is led by a 64-megapixel Samsung GW1 chip with a f/1.8 aperture for super high-resolution shots, or for 4-in-1 pixel-binning to boost sensitivity in low-light scenarios. Below that is an 8-megapixel ultra-wide camera, which also handles macro shots at down to 3cm. The top camera is a 12-megapixel telephoto shooter, which offers up to 5x optical hybrid zoom (or a gimmicky 20x hybrid zoom, if you're really desperate). Last but not least, there is a 2-megapixel f/2.4 monochromatic camera at the bottom which assists the main camera's portrait mode.

One of the main photography features that Realme is pitching for the X50 series is "Nightscape 3.0," which comes with a "Tripod Mode" that does super long exposure of up to 50 seconds for some interesting night shots, so long as you can mount your phone onto a tripod. "Nightscape 3.0" also has an "Ultra Nightscape Mode," which essentially boosts the camera's sensitivity to take bright images even when illuminance is down to just 1 Lux. As for video, it's just the usual 4K@30fps recording with two levels of video stabilization, and there's also real-time bokeh effect video if you want to try something different. 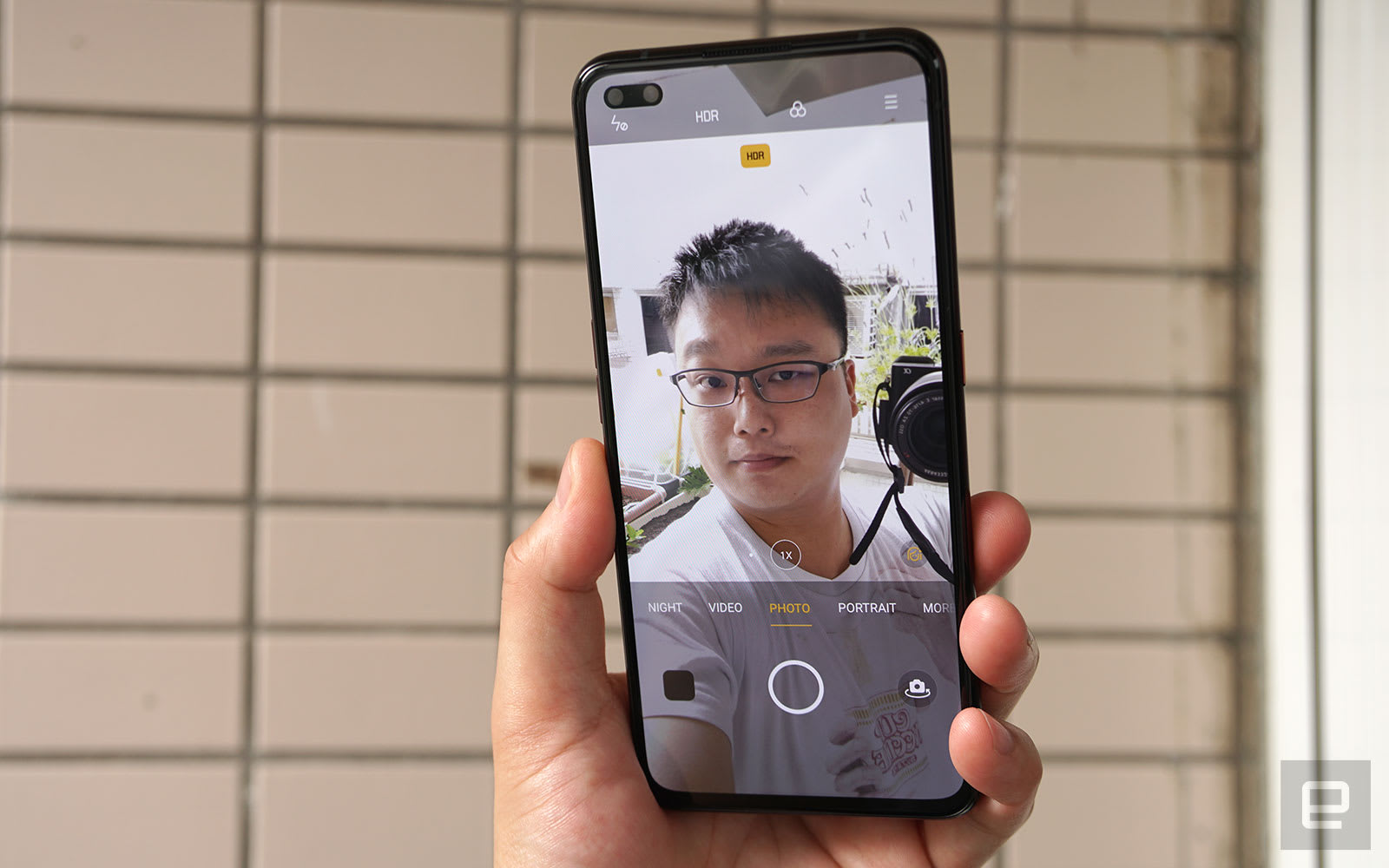 On the other side of the phone, you get a 32-megapixel f/2.5 main selfie camera along with an 8-megapixel f/2.2 ultra-wide shooter, both powered by Sony sensors and are stuffed into the screen's top-left punch-hole. Again, there's real-time bokeh effect video recording here, but users will likely be more interested in taking slow-motion selfies at 1080p@120fps (just don't call them "slofies").

The Realme X50 Pro runs on Android 10 with Realme UI -- essentially a near-stock Android experience with some goodies ported over from Oppo's ColorOS, such as gesture navigation and smart assistant features. And of course, the software runs even smoother on the 90Hz display. One cool feature here is Dual Mode Music Share, which lets you play music through wired (USB) earphones and Bluetooth earphones simultaneously, and you can even pick up calls with the earphones you're wearing while letting your friend continue listening to music with the other pair.

There's no word on US availability just yet, as Realme is targeting Europe for now, with Spain being the launch market in April. The Realme X50 Pro will start from 599 euros (about $650) for the 8GB RAM + 128GB storage version, and topping at 749 euros (about $810) with 12GB of RAM + 256GB storage. These are cheaper than even some of the recent 4G flagships, but apparently the China prices will be even lower when the phone launches there locally.