Over the last year, Fujifilm has toppled its APS-C rival Sony with some of the best mirrorless cameras out there, including the X-T3 and X-Pro3. Now, it's focusing on its ultra-popular compact street photography series with the launch of the X100V.

Fuijfilm is throwing all its latest tech at this model, adding a new higher-resolution 26.1-megapixel sensor and faster X-Processor 4 borrowed from the X-Pro3. It also comes with a new sharper lens, an updated hybrid OLED EVF and a higher-resolution tilting rear display. It even has solid video specs, borrowing many 4K features from the compact mirrorless X-T30.

In short, it's a complete technological overhaul. Combined with Fujifilm's street photography savoir faire and a very high price tag, I'm expecting a lot from the X100V. Now, does it deliver? 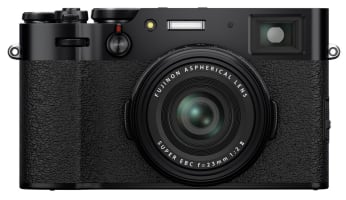 Available in black or silver/black, the X100V is a handsome camera with a strong professional vibe. It's lightweight and easy to carry yet has a full complement of manual controls that make street photography easier.

While it looks identical at a glance to the last model, the X100F, Fujifilm has changed a few important things. Most noticeably, it has removed the rear D-pad style four-way controller, as you can do most focus and menu adjustments with the joystick. This has the effect of cleaning up the design, and I didn't really miss the controller at all.

Fujifilm has also introduced touch control to the rear display. That further reduces the need for a D-pad controller, as you can use the touchscreen to set focus points or change the full or quick-menu settings. It also supports the swiping gesture functions Fujifilm first introduced on the X-E3.

I usually prefer buttons to screens, but overall, I like what Fujifilm has done. The touch display is nicely responsive and made it easy to change the focus point with my eye to the viewfinder. Depending on what I'm doing, I sometimes prefer the joystick for that, but it's good to have the touchscreen option as well. 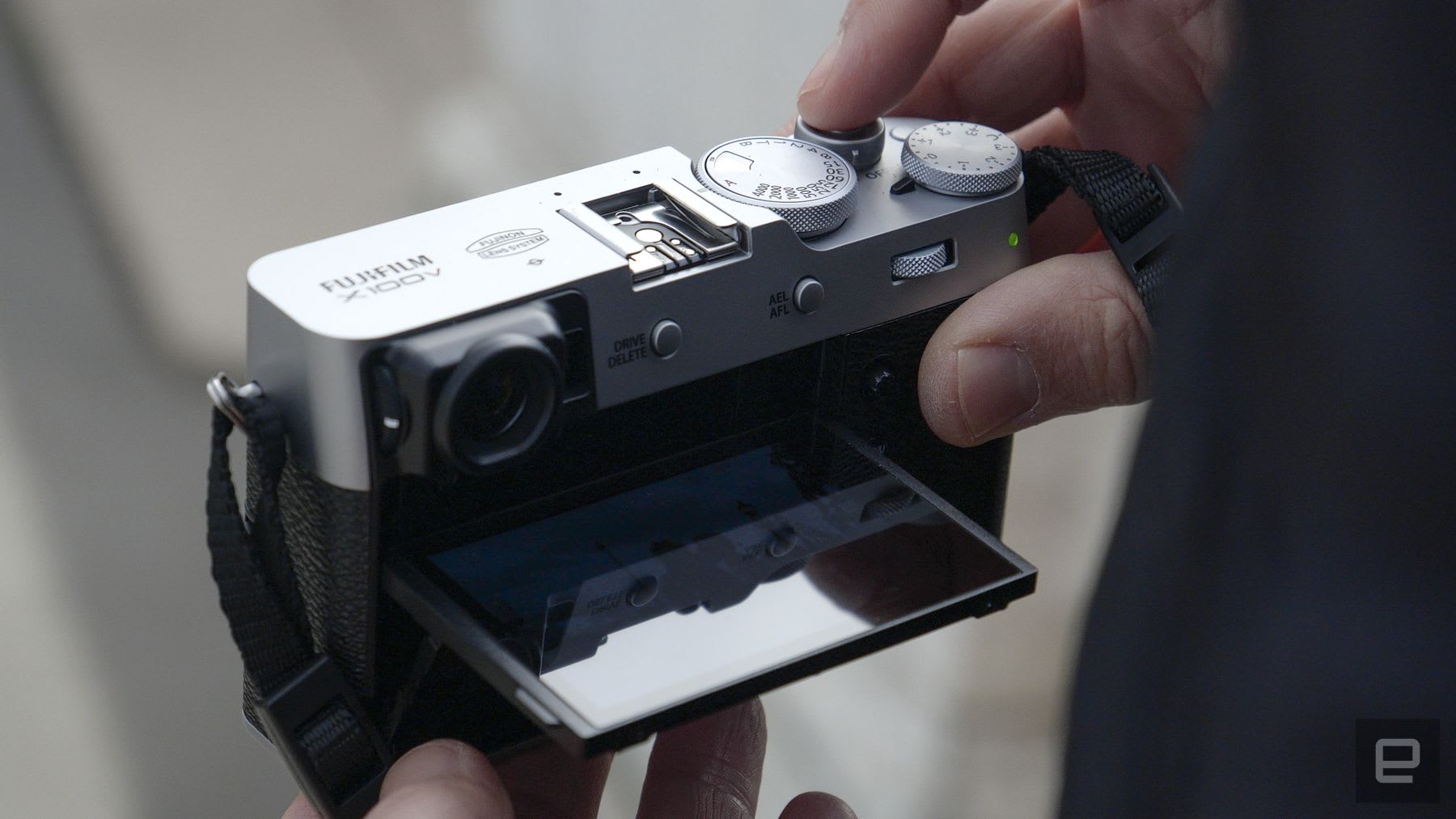 The display also tilts up or down now, which is the most important change in the X100V from a street photography perspective. It's much easier to shoot from the hip or from very low or very high angles. I don't like fixed-display cameras, so this feature alone would tempt me into buying the X100V.

The hybrid viewfinder is essentially the same as the one on the X-Pro3. It's larger than before and has a 3.69-million dot OLED instead of an LED display. That means it offers more contrast and brightness in electronic-only mode, and you get a brighter overlay when using the optical mode, too. I didn't use the optical viewfinder much on the X-Pro3 because I found it impractical when I changed lenses. However, it works perfectly with the fixed lens on the X100V.

The top and bottom plates of the camera are now made of more durable aluminum rather than magnesium, and it's the first in the series with weather sealing. That's key for a camera designed for travel and on the streets. Oddly, however, the front of the lens isn't sealed, so you'll need to purchase an adapter and filter to make it truly weather tight.

In other regards, the X100V looks and handles the same as previous X100 models. The battery is identical, but endurance has improved about 20 percent to 420 shots with the optical viewfinder. It supports just a single memory card, but at least it uses a fast UHS-II slot, unlike Sony's A6600. Other features include a 2.5mm mic jack that requires an adapter for any professional mic. You also get mini-HDMI and a high-speed USB-C port that doubles as a headphone jack.

The X100V now uses the 26.1-megapixel sensor and X-processor 4 found on the X-T3 and X-Pro3, rather than the old 24-megapixel chip. It also has a nearly silent mechanical leaf shutter that can sync with the flash at speeds of up to 1/4000th of a second. That gives the flash a lot more range than other cameras that are limited to flash sync speeds of 1/500th of a second or less. It also means you can shoot in the street without needing to use the electronic shutter, which minimizes rolling shutter distortion in action photos. 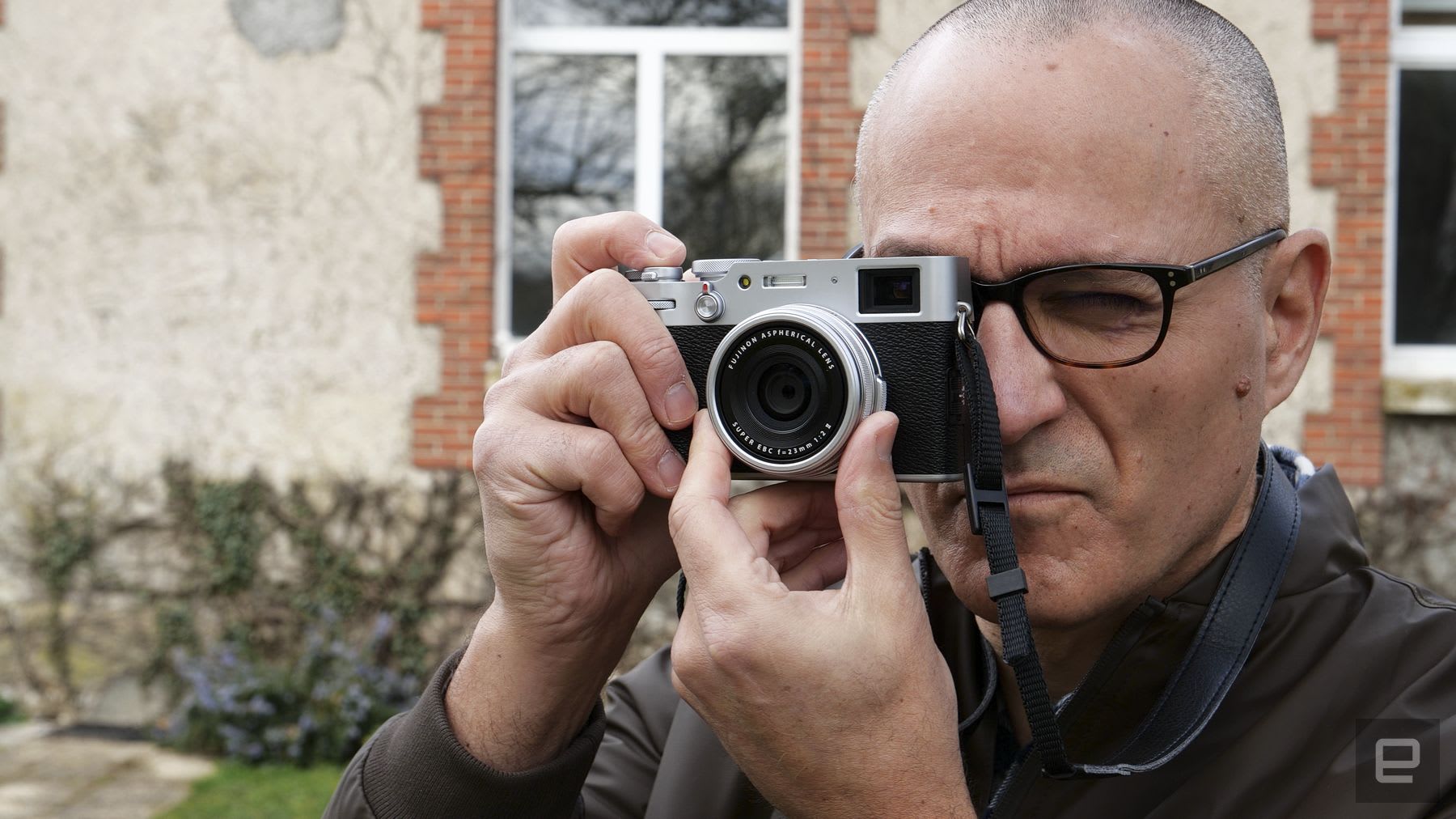 It also shares the stellar burst performance characteristics of its mirrorless siblings. You can shoot at up to 11 fps with the mechanical shutter or 20 fps in silent electronic mode. Those speeds are in sports or action camera territory, which isn't bad for a compact fixed lens camera. It also gives street photographers an option to shoot quick bursts to capture just the right moment or expression.

The phase-detect autofocus system can usually keep up with those speeds in continuous AF mode. For example, with a subject moving toward me at a brisk pace, most of my shots were in focus, even very close up. I also found it could reliably nail single-shot autofocus for candid street shots -- I ended up with very few that were blurry.

Fujifilm has also improved the face- and eye-tracking. It's not only faster and more accurate, but you can either select the face you want to track or let the camera do it automatically.

All that said, I still had trouble if the subject wasn't very close to the camera or wore glasses. Speed-wise, it's not as fast or accurate as Sony's mirrorless or compact cameras, especially the RX100 VII, either for regular AF point tracking or face and eye detection.

The X100V lacks any image stabilization, so you'll need reasonably fast shutter speeds when shooting handheld. That said, street photo subjects often move, and image stabilization doesn't help you there. To that end, I didn't miss it much except for video, but more on that in a minute.

With an all new 23mm f/2.0 lens and higher-resolution sensor, the X100V's images that are noticeably sharper than before. It's not just sharper at the f/8 sweet-spot either -- it delivers crisp images wide open and at close focal distances, too.

As I've seen with Fujifilm's other cameras using this same sensor, other qualities are excellent. Fujifilm has the best color science for skin tones, bar none, so any shots with human subjects looked vibrant and natural. Because the camera is so people-centric, however, colors for other subjects like food or markets -- while accurate -- can look muted. To that end, you may need to boost them in your photo-editing tool of choice.

Bokeh, or the quality of out-of-focus parts of the images, is nice and soft but lacks the dreamy quality of full-frame compacts like the Sony RX1 RII.

RAW photos retain plenty of highlight and shadow detail that can be recovered in extreme lighting situations. That gives you plenty of options in post to make your photos look the way you want. If you nail the exposure, you can easily use JPEGs straight out of the camera without any post-processing needed whatsoever.

The X100V is obviously not as good as full-frame cameras in low light, so photos taken at high ISOs will have more noise and can look desaturated. In the expanded ISO range at 25,600 and 51,200, noise levels are high and there's a pronounced red color shift. 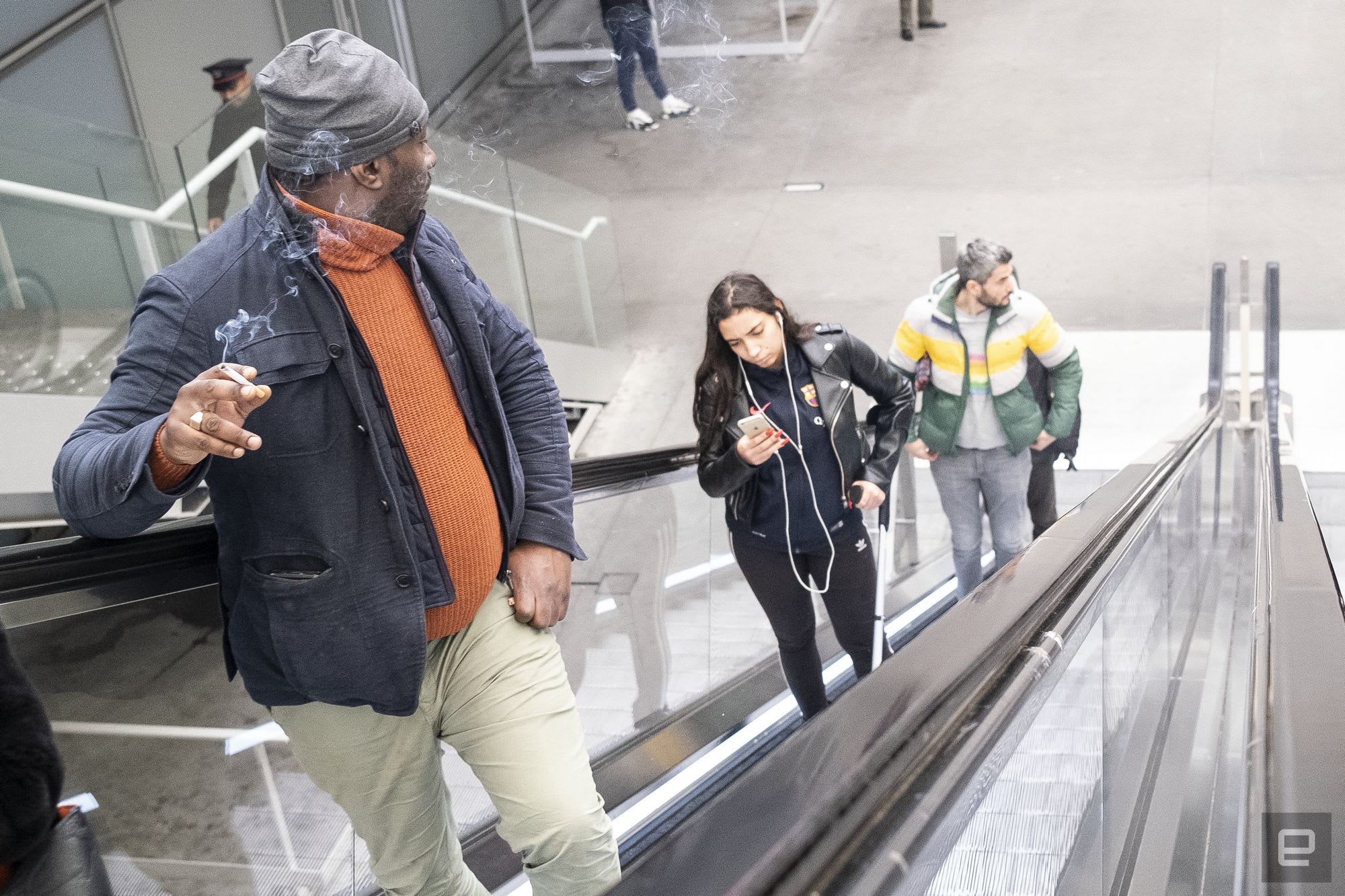 In that regard, if you're looking at APS-C cameras in general, it can't quite stand up to Sony's A6600 or the Nikon Z50. While the lens is fast enough and the noise levels good enough for most shooting situations, really dim rooms might give you trouble -- especially considering the lack of built-in stabilization.

That said, though, it's certainly the best compact APS-C camera in low light. Considering that it has a bit more resolution than those mirrorless models (and thus smaller pixels), quality is very acceptable at up to ISO 6400. Beyond that, you'll need to get the exposure right or you won't be able to boost shadows much without producing a lot of noise.

As I've said before, Fujifilm's film simulations are not a toy-like afterthought as with other brands. The X100V has the same ones as the X-Pro3, including the new Monochromatic Color and Classic Color simulations. With the quality of those and Fujifilm's JPEGs, purists can get the look they want right out of camera and keep post-processing to a bare minimum.

Up until recently, no one would have taken the idea of shooting video with an X100-style camera seriously. That all goes out the window with the X100V, though, which is now the best compact on the market for video.

You can shoot 4K at up to 30 fps and 1080p video at 120 fps for ultra slow-mo. The camera supports decent maximum bit rates as well, at up to 200 Mbps, so you won't get gnarly compression artifacts. 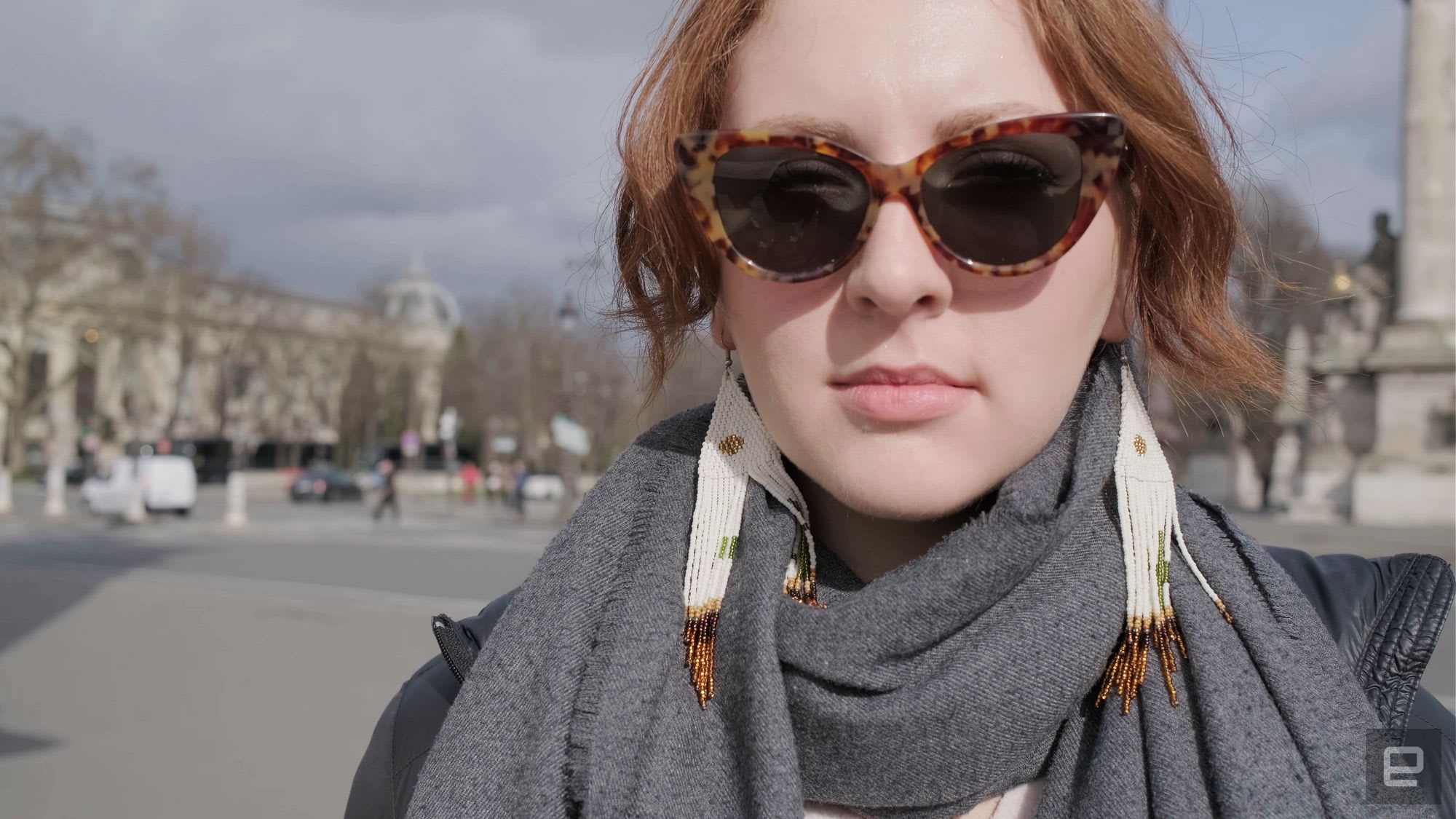 Video autofocus is also much improved, tracking faces and subjects with decent accuracy. However, it doesn't hold up well compared to Sony's compact models, especially the RX100 VII. Also, you'll want to tweak the AF speed setting before you start shooting, as it's a bit slow by default.

The X100V supports 10-bit output to the external HDMI port, though you'll have to be careful with the fragile mini-HDMI jack. You can also shoot using Fujifilm's F-Log profile to max out the dynamic range. As mentioned, it has a mic input and headphone output via the USB-C port, but you'll need adapters for both.

I attached a Blackmagic Video Assist 12G HDR to the X100V and captured some 10-bit ProRes video. It certainly gave me more video-editing flexibility, as you'd expect. However, I doubt many folks will attach bulky external recorders to a camera this small, so while it's nice to have, I'd question the benefit.

Rather, I see it as a better choice for discreet street videography, as nobody would likely even think that you're shooting video. It has some nice potential for little slice-of-life street films, using the black and white mode or other film simulations.

The lack of in-body stabilization means that shooting video handheld is a challenge, though. Unless you have very steady hands, you'll need either a tripod or stabilizer, both of which rule out shooting discreetly. Also, I wish that Fujifilm had used a regular 3.5mm microphone input that doesn't require an adapter, as the built-in stereo microphone is terrible.

I didn't experience any overheating problems shooting video with the X100V myself, but other reviewers and commenters on Engadget's X100V YouTube video have. It's not unusual for small-body cameras to overheat while shooting 4K video, particularly in warm weather, but the problem appears to be widespread with this particular model. I've reached out to Fujifilm for more information and will update the review if I hear back. 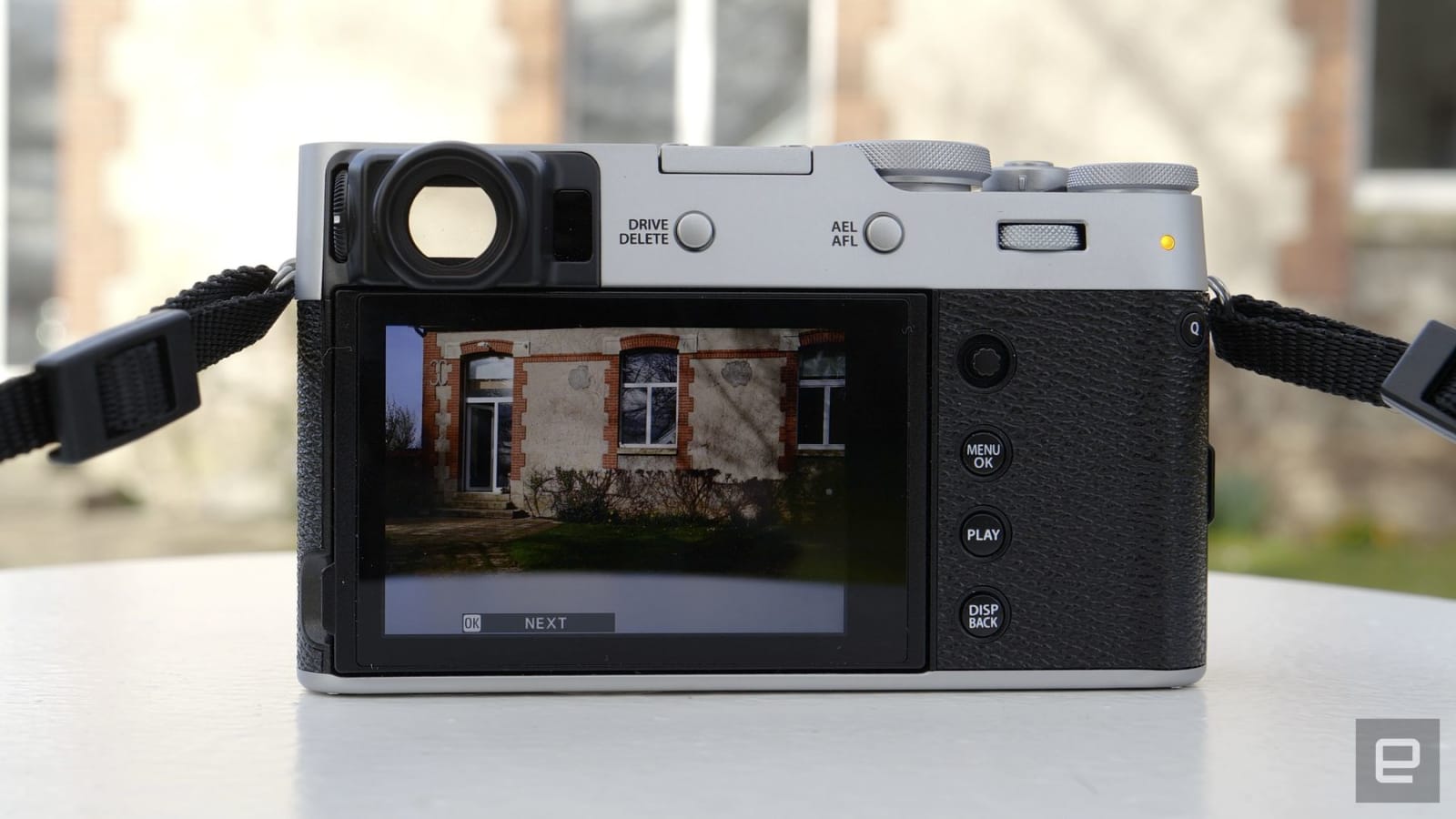 Fujifilm has spent years perfecting the X100 series and, as a result, the X100V is a beautiful camera that's a joy to use. At the same time, it represents the biggest upgrade yet from a technical standpoint, helping Fujifilm really lap the competition in this market.

Fujifilm cameras are fantastic for people photos, making it ideal for street photography. And the camera is sharper, by far, than it's ever been because of the higher-resolution sensor and much-improved 23mm f/2.0 lens. The tilting screen makes street photography much easier, it's now weather sealed and is a much better video camera. That's on top of numerous other small improvements.

In fact, your best bet as an option to the X100V is Fujifilm's X100F, which you can now find for $1,100. Considering the extra features on the X100V, though, I'd recommend digging up the extra $300 to get this model. It has the technical prowess to go with the excellent handling and good looks, so if you're into street photography, it really can't be beat.