These projectors are especially useful for watching sports and playing video games.

This post was done in partnership with Wirecutter. When readers choose to buy Wirecutter's independently chosen editorial picks, Wirecutter and Engadget may earn affiliate commission. Read the full blog Is an ultra-short-throw projector a good substitute for a big-screen TV?.

The giant video image from a home projector is the envy of every TV watcher, but traditional home theater projectors need dark rooms and lots of space to project a large image. Ultra-short-throw projectors have emerged to overcome these limitations. Epson, Hisense, LG, Optoma, and Sony all have introduced models in this category, often touting them as a great substitute for a large-screen TV in your living room. Although these projectors can deliver a 100-inch (or larger) image for a much more reasonable price than a TV of a similar size, you need to be prepared to sacrifice both performance and features in the process.

What is an ultra-short-throw projector?

Through the use of special lenses and mirrors, an ultra-short-throw projector can create a very large image on a screen or wall from a very short distance. Unlike most projectors, which need to be about an inch away from the wall for every inch of diagonal screen size they project, a UST projector can sit up against (or within 3 to 4 inches of) the wall and still project a large image. This lets you enjoy a bigger image in a smaller space, and because a UST projector works well on a tabletop or shelf, you don't have to mount it on the ceiling to keep people from walking in between the projector and the screen. The downside is that UST projectors cost more than projectors with a conventional lens and can also sacrifice some image quality.

More affordable UST projectors, such as the Optoma GT5600, use DLP projection technology and a traditional bulb, whereas more expensive models, like the upcoming Epson LS500 or the Sony VPL-VZ1000ES, use LCD or LCoS technology as well as lasers or LED bulbs as the light source. Traditional bulbs are generally brighter than a laser or LED light source, but they age over time (you have to replace them after around 3,000 to 6,000 hours) and also take about a minute to reach full brightness. Lasers and LEDs have a lifespan of around 20,000 hours but can't be replaced, so once they die, the projector dies too. But because they turn on almost instantly and typically produce less heat than a traditional bulb, they don't require a noisy fan—they function more like a standard TV.

Companies such as Epson and Hisense also offer complete packages that pair their UST projectors with a matching ambient-light-rejecting screen, usually in a 100- or 120-inch size. These systems include everything you need to get up and running, and they take the guesswork out of pairing a projector and screen.

Some models from LG, such as the HU85LA, feature an integrated TV tuner and streaming platform, just like a smart TV, so you don't need to connect a separate source (but you still need speakers or a soundbar to get decent sound).

Where does an ultra-short-throw 4K projector excel? 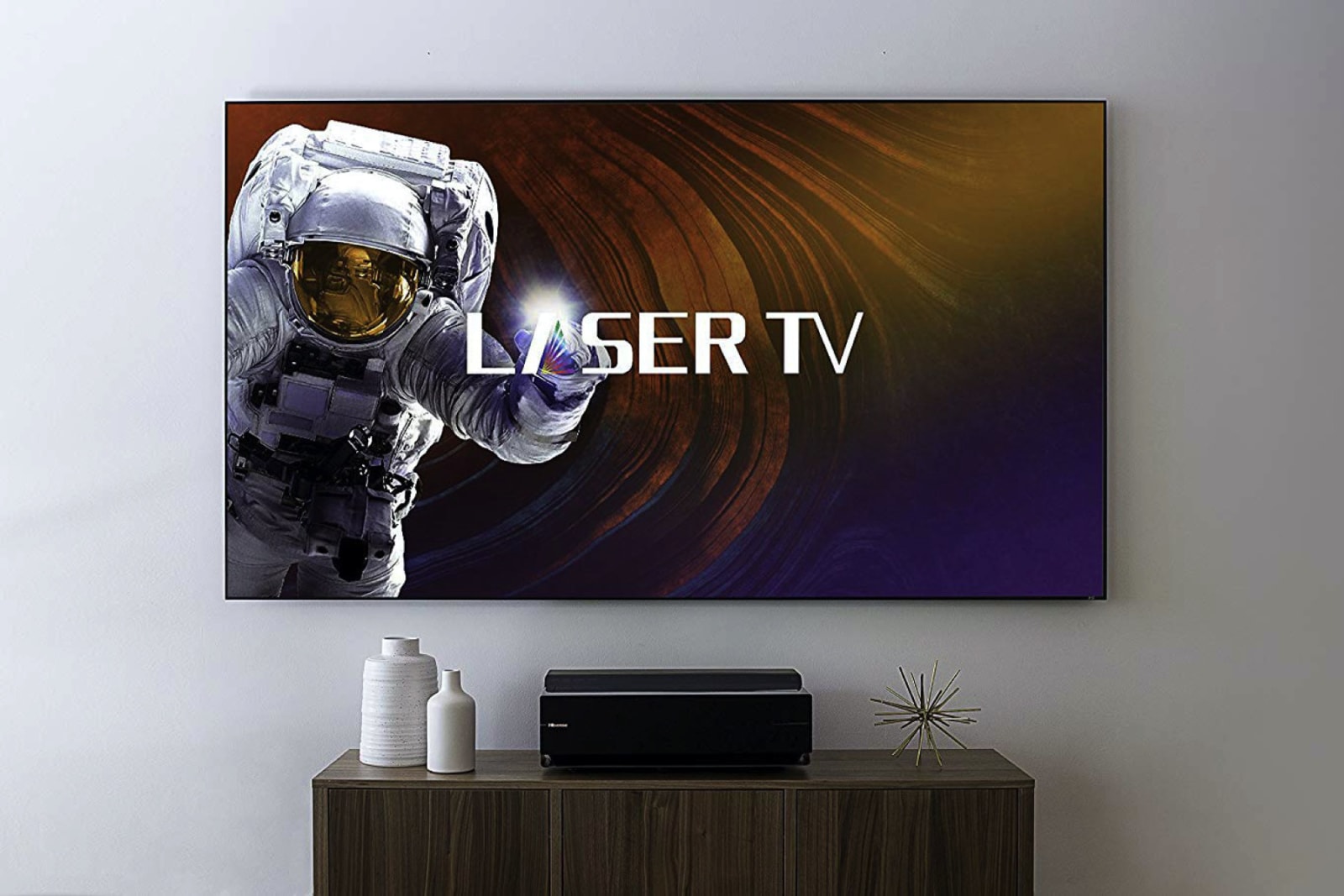 There are two types of video that every manufacturer uses when showing off its ultra-short-throw projectors: sports and video games. These projectors usually put out a lot of light, so they can produce a big, bright, colorful image even in a room with some ambient light—as a result, brighter content, as in sports and video games, really pops.

Watching a sporting event on a 100- or 120-inch screen makes for a highly immersive experience, and these projectors can deliver that. Even better, with hardware like a Dish Hopper DVR, or even with ESPN's streaming app, you can watch four games at once. With four 50- or 60-inch screens, each delivering HD resolution, you get that sports-bar feeling at home, and it makes for a fun Saturday or Sunday football-viewing experience in the fall.

Where does an ultra-short-throw 4K projector fall short?

The main performance areas where these projectors fall short is in their contrast ratios and dark-scene performance. While sports may look great, a dark film such as the final Harry Potter movie can turn into a murky, dark mess where you can't make out the fine black details at all. The complex lens systems that allow for close wall placement can hurt the contrast ratio, so a UST projector can't produce an image with the same pop in a dim or dark room that a traditional projector can create. UST projectors work well with bright, colorful content but not with lots of movies.

Some manufacturers of UST projectors try to make these models more appealing by suggesting that if you get one you won't have to worry about whether your wall can support a large TV. In reality, however, you'll still need to use a projection screen to get the best image. If you project the image directly onto a wall, it will look flat and completely washed out if you have any light in the room. For the best picture quality, you need a light-rejecting, short-throw screen. This screen material is optimized to provide extra brightness to the image and to prevent ambient light from washing out the picture by reflecting it away from the viewers, but such screens are generally more expensive than other screens, and you'll still have a 100-inch or larger object taking up space on the wall. Drop-down screens are available, but a 100-inch model in an appropriate material typically starts at $2,000 or more.

The special lens-and-mirror systems used in UST projectors are also more likely to produce image artifacts such as color fringing and haloing if not carefully aligned. And it can be more challenging to position the image precisely on the screen because you don't have as much lens adjustment and placement flexibility to work with.

You also don't get great sound quality from these projectors. They have built-in speakers that work, but to get decent audio you need to pair them with some sort of external sound system. Although flat-screen TVs can have anemic sound compared with the giant TVs of the past, they still offer better sound than projectors do.

What do we suggest instead of a UST projection system? The truth is, big-screen TVs are a much better value than they used to be, and they produce better images. For example, the new Epson LS500 UST projector costs $5,000 with a 100-inch screen and $6,000 with a 120-inch screen. Compare that with our favorite LCD/LED TV right now, the Sony X950G, which typically costs $4,500 for an 85-inch screen. The Sony TV is not as large as the image the Epson projector can show, but it offers a brighter image that looks great no matter what the room's lighting conditions are. Plus, it has better sound quality and easily outperforms any UST projector on darker content and HDR. The 85-inch X950G even has a wider viewing angle than most LCD TVs, so it would work great for big-group situations where you'd usually prefer a projector. And unlike some short-throw projectors, this Sony TV offers true 4K resolution and doesn't have to resort to lens shifting or other tricks.

You could also pair a traditional projector with a drop-down projection screen to create a giant image in your living room. You can find a similarly bright standard-throw projector—something like Epson's Home Cinema 4010—for around $1,500 to $2,500. Paired with a light-rejecting, drop-down screen, it would still come in below the price of many UST systems while likely offering a better image. You'd have issues with people walking between the projector and screen sometimes, but you could easily get around that by mounting the projector on the ceiling.

As the UST projector category evolves over the next year or two, the above issues might become a thing of the past, but for now we think you have better options for most situations. If you primarily watch sports and play video games, a UST projector might be worth the investment, but most people should look elsewhere for their big-screen home-entertainment setup.