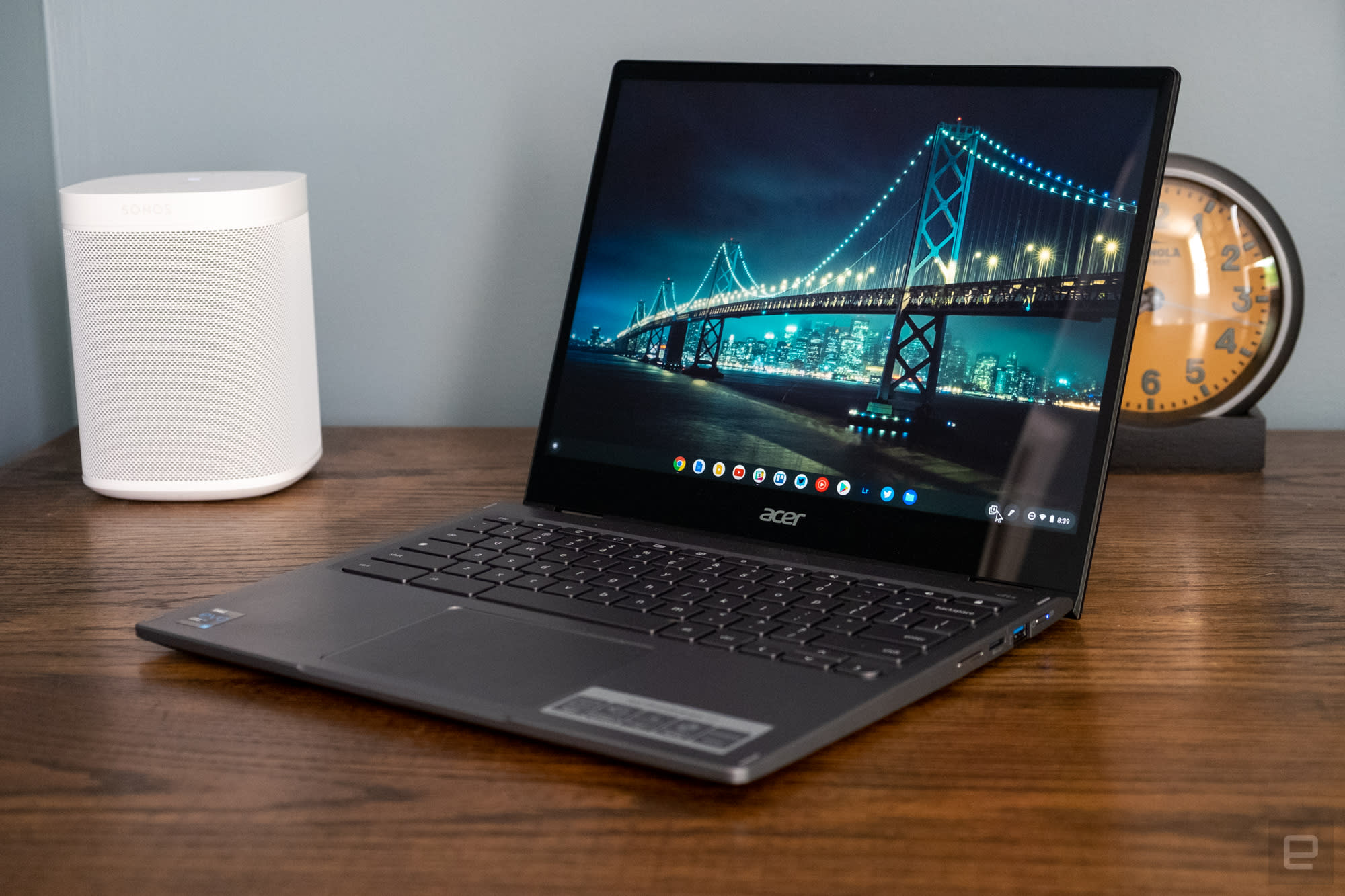 Acer Chromebook Spin 713 review: It's all about the display

Acer's latest Chromebook is a great all-around machine with a standout screen.

One of the best things about Google’s Chromebook Pixel, first introduced way back in 2013, was its screen. At a time when the vast majority of laptops used a 16:9 screen aspect ratio, the Pixel bucked the trend with a tall, 3:2 display. I fell in love with that extra vertical screen real estate. And while a handful of Chromebooks over the years have also featured 3:2 screens, most have stuck with wider ratios that are great for watching movies but not so much for scrolling through long documents.

Because of my weird screen fixation, Acer’s Chromebook Spin 713 has been on my radar since it was released in 2020 — it’s one of the few Chromebooks currently available with a 3:2 display. While I didn’t get a chance to review the first model, I’ve been using the updated Spin 713 that Acer announced a couple weeks ago. At $699, it’s not cheap, but in a lot of ways it’s the ideal Chromebook for anyone who wants an upgrade over more basic options. 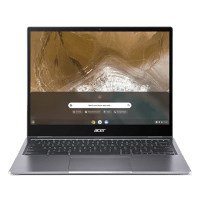 My first impression of the Spin 713 is that it’s exceedingly utilitarian. It’s a big grey slab of a laptop, with few flourishes to set it apart and numerous fan slots all over the back and side. (I do like the reflective trim around the lid and trackpad, though). The design may be purely functional, but the Spin 713 is definitely a solid, well-constructed laptop, with no flex or creaking; the 360-degree hinge is also sturdy and works smoothly. Of course, given that this computer isn’t a cheap, low-end Chromebook, this level of build quality is to be expected.

In keeping with its utilitarian design, the Spin 713 isn’t the thinnest or lightest laptop out there — it weighs a hair over 3 pounds and is two-thirds of an inch thick. That’s bigger and heavier than Google’s Pixelbook Go and Samsung’s Galaxy Chromebook 2, to name a few more svelte options. At least Acer didn’t skimp on the ports here: you’ll find two USB-C Thunderbolt 4 ports on the left side, along with HDMI and headphone jacks. The right side has a traditional USB-A port and a microSD card slot alongside a volume rocker and power button.

So far, this is all standard laptop territory, but the Spin 713’s display sets it apart. It’s a 13.5-inch touchscreen with a somewhat strange 2,256 x 1,504 resolution. That’s thanks to the 3:2 aspect ratio, which Acer says offers 18 percent more vertical screen real estate than a more common 1080p display. It’s also relatively pixel-dense at 200 pixels per inch, a good bump over the 166 PPI count on a standard 13.3-inch, 1080p display.

Putting aside the jargon, the Spin 713’s screen is my favorite thing about it. It’s bright and sharp, and the increased vertical real estate makes many of my daily tasks easier. It’s just better to see more of a draft I’m writing in Google Docs or more of a long article in Chrome. Given how much of the internet is designed for vertical scrolling, I’m always surprised that the widescreen display is the standard — sure, it’s great for movies, but almost everything else people do benefits from more vertical space.

The keyboard and trackpad are quite similar to ones found on other recent Acer Chromebooks — they’re good, but not the best I’ve ever used. The backlit keys have plenty of travel, but they feel a little more wobbly than those on the Galaxy Chromebook 2 or Pixelbook Go. It just doesn’t feel quite as premium or solid as those other computers. I was still able to type quickly and accurately, though. Thanks to the Spin 713’s taller display, there’s room on the keyboard deck for a larger trackpad, which was smooth and responsive. Given that trackpads on Chromebooks can often feel rather cramped, this was a pleasant and unexpected benefit of the Spin 713’s extra height.

As the name suggests, the Spin 713 has a 360-degree hinge that lets you flip the screen around into tablet mode. I’ve written numerous times about how this trick has very little value to me, and that hasn’t changed this time. The design actually introduces a compromise as well — in this case, it’s the speakers. The Spin 713’s speakers are on the bottom of the laptop, so you can still hear audio when you’re in tablet mode. These two small speakers are not impressive — volume is decent, but there’s not even a hint of bass. I’d much rather have better speakers on the keyboard deck and a standard laptop hinge.

Acer will offer the Spin 713 in a variety of hardware configurations; the $700 model I tested featured Intel’s 11th-generation Core i5 processor (clocked at 2.4GHz with Turbo Boost up to 4.2GHz), 8GB of RAM and 256GB of storage. Those are some pretty solid specs for a Chromebook. My usual apps include multiple Chrome windows with 10-15 tabs in each, plus web apps for Hangouts, Slack, Trello, Tweetdeck, Keep and YouTube Music. I also run a handful of Android apps, including Telegram, Todoist, Facebook Messenger, Spotify and Adobe Lightroom, though most of those aren’t running at all times.

The main things I look to avoid in the Chrome OS experience include tabs that need to be reloaded frequently, sluggish Android app experiences and skipping music playback. Not surprisingly, I didn’t encounter those issues with the Spin 713; it has more than enough RAM and processor horsepower to handle my fairly modest needs. This also bodes well for the Spin 713’s longevity, as these specs should be sufficient to power Chrome OS for years without any issue.

Unfortunately, as with many recent Chromebooks I’ve tried, the Spin 713’s battery life is merely okay. When looping a video with display brightness set to 66 percent, the Spin 713 lasted just over eight hours, almost two hours short of the 10 hours Acer claims. Under normal use the laptop lasted between six and seven hours. It’s not a shock given the Core i5 processor and relatively high-resolution screen, but I still wish I got another hour or two.

There are a ton of other Chromebooks on the market, but the Spin 713 is fairly unique thanks to its taller screen. But there are a few Chromebooks that have similar specs and price worth considering. Chief among those is Samsung’s Galaxy Chromebook 2, which launched earlier this year. It’s thinner and lighter than the Spin 713 and definitely has a more premium feel. The trade-off is that it uses a Core i3 processor (rather than an i5) and has a 1080p screen. But it uses Samsung’s QLED technology and is one of the nicest displays I’ve seen on a laptop in a while, aside from the cramped aspect ratio.

If you’d like to save some cash, Lenovo’s Flex 5 Chromebook is a great option. Yes, it’s from 2020 and has slightly lower specs than the Spin 713 and Galaxy Chromebook 2. We’re talking about last year’s Core i3 processor, 4GB of RAM and 64GB of storage. But, it sells for just over $400 on Amazon right now and was an excellent all-around performer when I reviewed it. Acer also has a relatively new, more affordable option, the Spin 514. It costs $600 and includes a quad-core AMD Ryzen 5 3500C processor paired with 8GB of RAM and 128 GB of storage. Again, you’ll miss the taller screen found on the Spin 713, but otherwise it’s a good laptop.

Even if Acer’s Chromebook Spin 713 didn’t have its standout screen, it would be an easy device to recommend. The build quality is good, it performs very well and it should be fast enough to serve you for years to come. Adding in that 3:2 display makes it one of the best Chromebooks on the market. I wish that battery life was longer and that it had a slightly more premium feel, but it gets just about everything else right. If the price doesn’t scare you off and you don’t need best-in-class battery life, the Spin 713 is a Chromebook that should satisfy just about everyone.