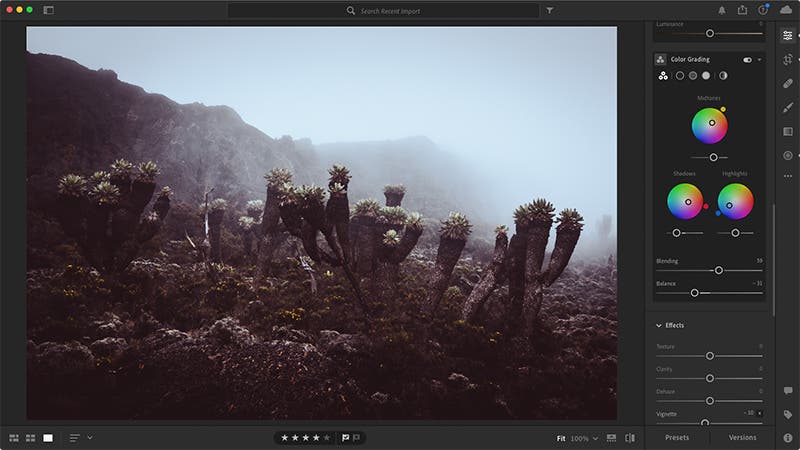 One of the most effective ways to change the mood of a photo is to add and subtract color to it. That’s something Adobe’s Lightroom software has given you the option to do for a while, but in one of the biggest changes the company has made to the Develop Module in a while, it’s adding a new Color Grading module to give users even more control over the colors in their photos.

The new tool builds on Lightroom’s existing split toning feature by adding control of midtones to the mix. If you’re not familiar with split toning, it’s a tool you can use to tint the highlights and shadows of an image to give it a specific mood. If you’ve ever seen a “orange and teal” image on Instagram, chances are it was made with the split toning tool. The added ability to tint the midtones gives you more creative freedom. But just as important is the fact that Adobe has created a new interface for this feature, one that should be familiar to anyone who has used similar tools in video editing programs like DaVinci Resolve. What’s more, you can use the feature on both PC and mobile.

When most people think of Lightroom, they tend to think of its capabilities as a photo editor first, but it’s the organizational features Adobe built into the Library module that separate the software from competitors like Capture One. Now that module is about to get more powerful and accessible with the help of AI.

In Lightroom Creative Cloud, Adobe is adding a feature called Best Shots. It uses an AI algorithm to first group together your images, selecting the most compelling one in any series of photos where you have several that look similar. In choosing one capture over others, the algorithm is looking at factors like whether you properly exposed the image and nailed focus. It also takes into account the subject matter of the photo, as well as more the more creative choices you made, such as how you framed your composition. A slider gives you the option to decide how selective the algorithm goes about its job. Once the tool has done its thing, you’re free to add additional photos as you wish, and you can use Lightroom’s other organizational tools, such as the pick and star features, to further organize an album.

Creating a workflow within Lightroom for narrowing down an entire album’s worth of images into just a handful of your best shots is almost an entire topic onto itself. Like composition, it’s also a skill that can take years to develop. Those two things together can make using the Library module of Lightroom seem daunting to beginners, which is where a feature like Best Photos can help make the app more approachable.

One other new tool Adobe is adding to Lightroom is perfect for those who frequently switch devices as they work on a single a photo. With Auto Versions, Lightroom will automatically create copies of your edits, allowing you to go back go back to a previous set of adjustments at any time, whether you made those tweaks on that device or not. Think of this as an extension of Lightroom’s existing Virtual Copies and Snapshot features, but with the added advantage that you don’t need to go out of your way to create them.

Those are just some of the more significant Lightroom enhancements that Adobe announced today at its Adobe Max conference. It also shared updates for Photoshop and Fresco, which we’ve detailed in separate articles.

In this article: adobe, photography, lightroom, artificial intelligence, adobemax2020, personal computing, news, gear
All products recommended by Engadget are selected by our editorial team, independent of our parent company. Some of our stories include affiliate links. If you buy something through one of these links, we may earn an affiliate commission.