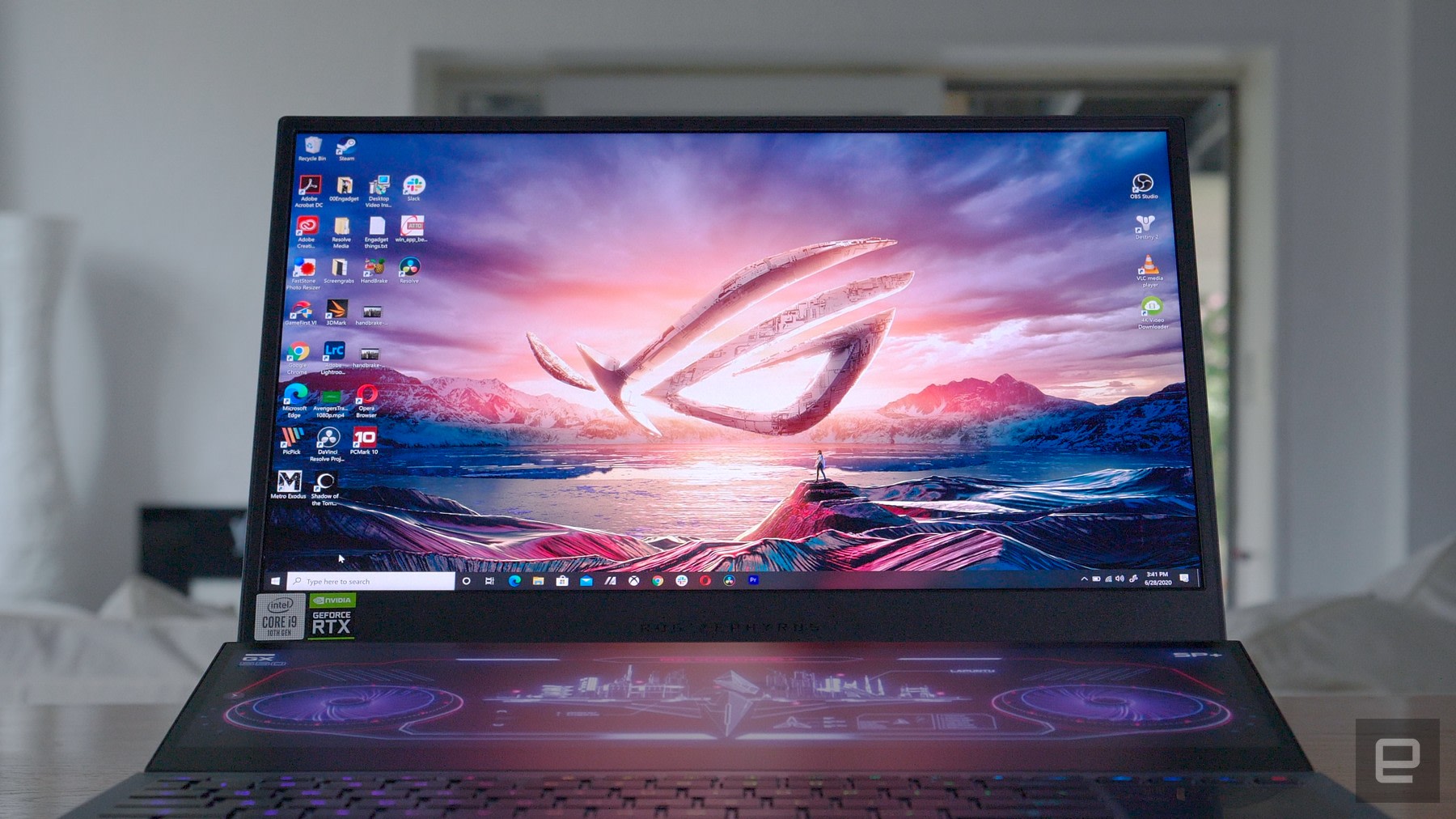 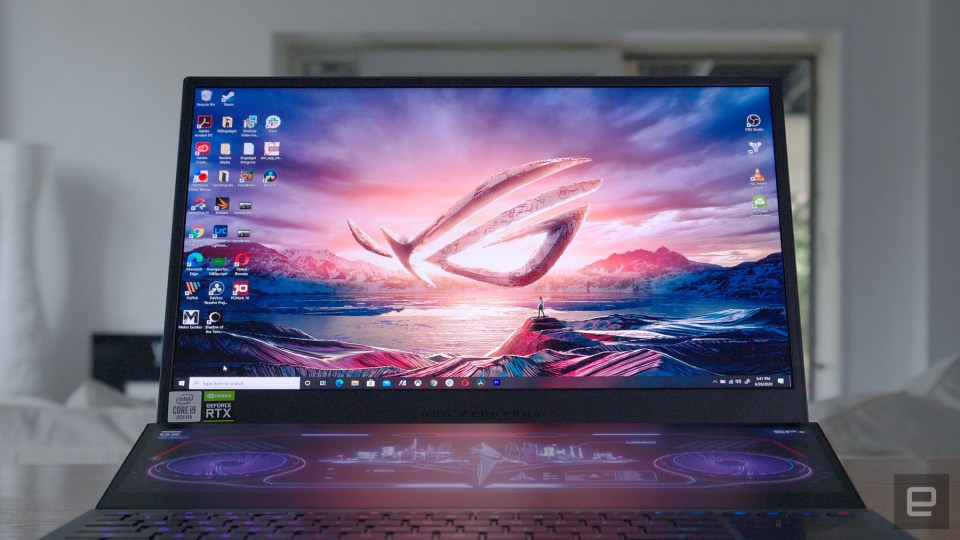 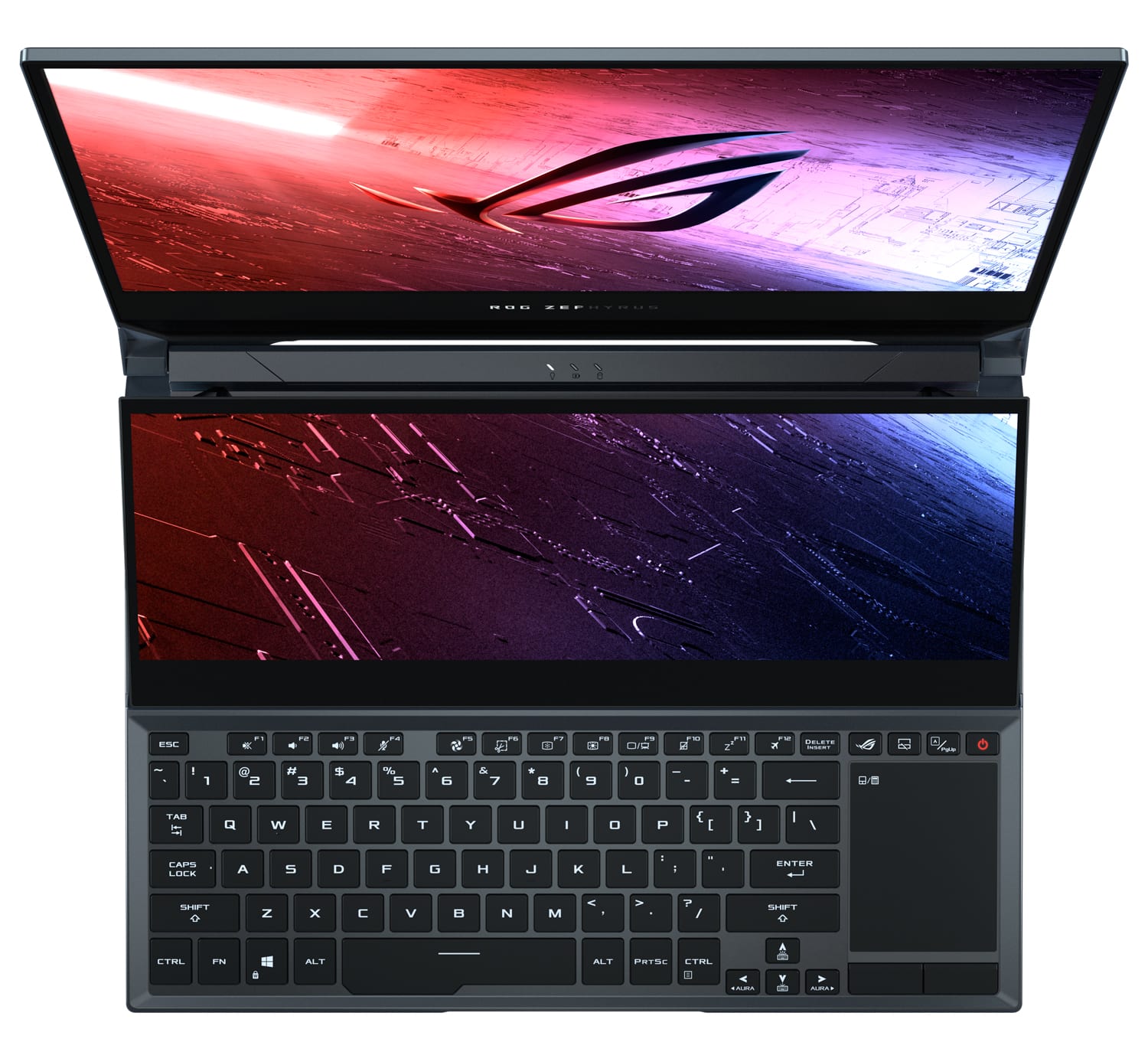 Second-screen laptops are the cool tech gadgets du jour, but so far, we haven’t seen a good reason to pay extra for one, given all the compromises. However, ASUS made a good case when it unveiled the futuristic ROG Zephyrus Duo 15. As well as a sleek design, it has top-flight specs and a high-resolution second display that tilts up for better cooling and visibility.

The Duo 15 looks stunning. It’s more refined and powerful than previous ASUS dual-display laptops and that might tempt early adopters who want to both impress their friends and still beat them at Far Cry 5. On the downside, it’s also heavier and more expensive than a normal 15-inch laptop. Now, let’s find out if it can go beyond that initial “wow” factor and justify its $3,000 starting price.

The ASUS ROG Zephyrus Duo 15 is the first laptop to really make good use of a second display. That gives it not only a strong wow factor but makes it easier to justify the extra expense. ASUS backs it up with top flight components that help it fly for gaming and content creation tasks. The downsides are mediocre battery life, a lack of key ports and a high price tag. If you can afford it, though, you’ll be the envy of all your friends, whether in a creative or gaming environment.

Be the first to review the ROG Zephyrus Duo 15?
Your ratings help us make the buyer’s guide better for everyone.
Write a review

Design-wise, the ROG Zephyrus Duo 15 is one of the few laptops that really gave me buyer’s lust. The second screen, which ASUS calls the ROG ScreenPad Plus, pops up via a hinge mechanism to a 13-degree or so angle when you flip the lid open. The tilt makes it easier to see and use, while also exposing fan intakes. ASUS said that increases airflow by 30 percent, improving performance and reducing noise. On a hot day, however, the fans still cranked to borderline annoying levels while I was playing Shadow of the Tomb Raider. 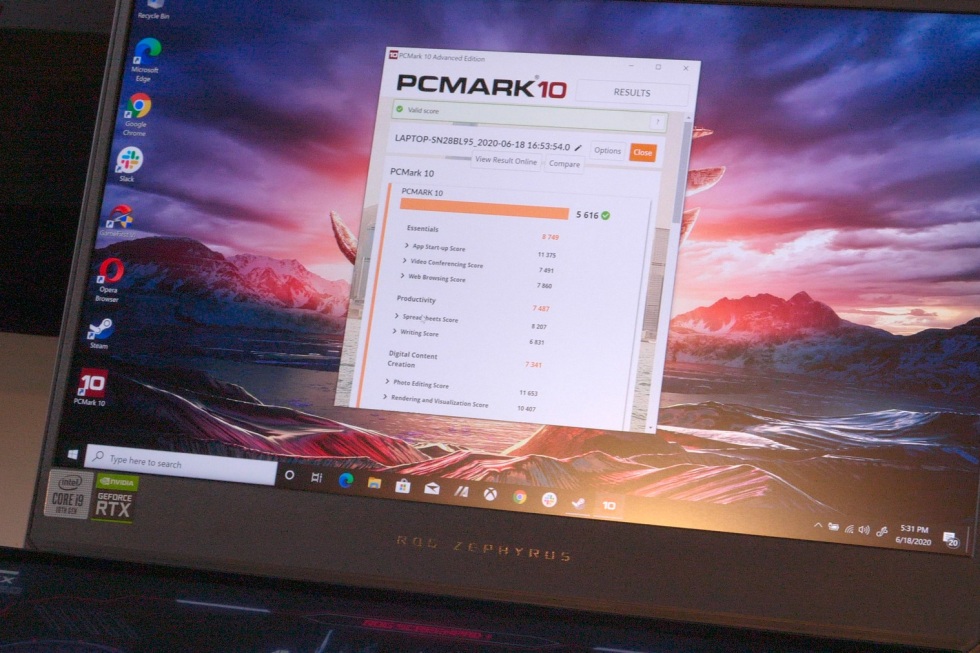 It has an impressive but definitely not standard 3,840 x 1,100 resolution display that flashes futuristic graphics when you turn it on. The matte coating works even in relatively bright environments, and with all that resolution, graphics are surgically sharp.

What, exactly, can you do with it? For starters, you can tap the translucent arrow button to launch commonly used apps and screen-specific functions like handwriting and quick keys. You can also swap apps between the top and bottom displays, group programs and more. A floating window also lets you instantly put apps on the ScreenPad, spread them across both screens or pin them to the ScreenPad launcher.

ASUS thinks its ideal use is game streaming with Twitch and other apps. The idea is that you can game on the main screen and put your broadcast controls, video feed, stats and more on the second screen. That could save you the hassle and cost of buying and packing around an external display (and look — subjectively — cooler while you’re at it).

I’m not a gamer or streamer, but I did try this with Twitch’s Studio beta, and it definitely looks (and feels) very slick. You can also fit the OBS Studio streaming app entirely on the second screen and use all the controls, though everything is a bit squished. With the touchscreen for control, it’s actually a pretty handy tool.

As for the other, more normal parts of the Zephyrus Duo 15, the magnesium aluminide chassis gives an aura of quality and keeps the weight down to 5.3 pounds. That’s manageable, but at least a half-pound more than a regular gaming laptop, likely due to the extra screen. (Keep in mind that it’s a scratch-prone material, too.) It’s surprisingly slim and has a pleasing design that I’d take to either a business meeting or gaming party.

The keyboard has an excellent feel for touch-typing and gaming functions, while the trackpad with physical buttons is a little cramped. While it doesn’t have a numeric keypad because of the screen, you can activate an electronic version with the touch of a key.

It comes with an ethernet port, 10 Gbps USB 3.2 Gen 2 port (Type C) and HDMI port around back, along with headphone/microphone jacks and a pair of USB 3.1 Type A ports on the sides. The built-in speakers are not bad at all, with more bass and a far less tinny sound than most laptops, gaming or otherwise. Finally, ASUS being ASUS, the keyboard lights up in a fancy rainbow pattern as the default color scheme.

However, it only has a single Thunderbolt port and there’s no card reader in sight. I used this machine to edit a 4K HDR video, and it easily was up to that challenging task, speed-wise. However, I could really have used an extra high-speed port and needed an external SD card reader to import my footage.

It also lacks a webcam, which is a bizarre design choice in the COVID-19 era. I presume ASUS did this to keep weight down, preserve battery life and keep the bezels small, but it doesn’t seem worth the tradeoff for such a key component.

My review model had the 4K 60Hz display, but you can also get one with a 1,920 x 1,080, 300Hz gaming-oriented screen. The 4K model covers 100 percent of the Adobe RGB spectrum and both versions have factory-calibrated Pantone certification for accurate colors.

There’s a lot of power under the hood, starting with a top-spec Intel 10th-generation 8-core i9-10980HK processor that can hit 5.3GHz clock speeds for maximum gaming power. It also packs NVIDIA’s laptop flagship GeForce RTX 2080 Super Max-Q GPU with 8GB of GDDR6 memory. Rounding things off is an incredibly fast 2TB NVMe SSD RAID, 32GB of 3,200 MHz DDR4 RAM and a huge 90Wh battery. There are no compromises here.

Those high-end parts boost gaming both subjectively and objectively. Using Shadow of the Tomb Raider’s benchmark, I was able to hit 70 fps at 1080p and 34 fps at 4K (at “highest” settings), Hitman at 99 fps in 1080p ultra mode and Far Cry New Dawn (1080p, ultra) at an impeccable 90 fps. Metro Exodus, meanwhile, could run at 45 fps or so in 4K with DLSS and other RTX settings enabled.

These real-world speeds (and synthetic benchmark scores) are right up there with other RTX 2080 Super laptops like HP’s refreshed Omen X 2S and the MSI GS66, so the ROG Zephyrus Duo 15 is in elite company. The only differences are a few frames-per-second here or there, and that’s often down to the different ways companies handle cooling, GPU/CPU clocking and other factors.

Despite the huge battery, the Zephyrus Duo 15 had a middling rundown result for 4K gaming laptops, looping a sample 1080p video for exactly 5 hours. Considering what’s working against it, though, like the 4K screen and high-performance components, it fared quite well. The second screen was disabled for this test, so turning it on is bound to suck the battery even more rapidly. And as with most laptops in this class, you’re not going to be able to game for long on battery power alone.

Games also looked sharp and immersive thanks to the enhanced Adobe color gamut and calibrated colors. ASUS doesn’t offer an OLED or HDR panel for this laptop, but the 4K and 300 Hz 1080p display (both IPS) are the next best thing. Meanwhile, the ScreenPad is a bit dim at max brightness compared to the main display, but it’s sharp and clear enough to let you monitor game broadcasts and do other chores.

On top of gaming, ASUS has touted the 4K version of the Duo 15 for content creation, pitching the idea of using the second screen as a place to put tools, timelines and other elements. With Premiere Pro, for instance, you can detach modules like the timeline and move them to the second screen. It was even easier with Davinci Resolve 16, which automatically switched the timeline down to the ScreenPad when I selected the “dual display” option.

It’s ideal for entertainment, too, letting you see shows from Netflix, Amazon Prime and other services the way their creators intended. It lacks HDR like the Gigabyte Aero 17 HDR, but the 400-nit display is brighter you can find on almost any other laptop on market.

Aside from the aforementioned lack of ports, it’s a stellar multimedia performer. The Handbrake 4K encoding test was the best we’ve ever seen on any PC, laptop or desktop. And I smoothly completed an entire 10-minute 4K HDR video edit on Davinci Resolve 16 with nary a glitch.

Can I say that the ASUS ROG Zephyrus Duo 15 is the first truly functional and attractive dual-screen laptop? I think so. It still has flaws, particularly the extra weight, reduced battery life and cramped keyboard. It’s also expensive, starting at $2,999 and running $3,699 as configured for this review. Meanwhile, MSI’s 15.6-inch GS66 costs $2,999 in a similar high-end configuration, a whopping $700 less.

If you’ve got the cash, however, the display gives it a very strong “want” factor, and it’s surprisingly useful for both game streaming and content creation. ASUS backs up the looks with very strong performance that’s among the best in its class.

Update 7/2/2020 3:35 PM ET: The post has been updated to indicate that Shadow of the Tomb Raider ran at 34 fps in 4K, not 29 fps and that the second screen tilts at a 13-degree, not a 15-degree angle. In addition, benchmark scores and battery life have been added.

In this article: asus, NVIDIA RTX 2080 super, Intel i9-10980HK, rog zephyrus duo 15, laptop, dual display, review, gear, gaming
All products recommended by Engadget are selected by our editorial team, independent of our parent company. Some of our stories include affiliate links. If you buy something through one of these links, we may earn an affiliate commission.