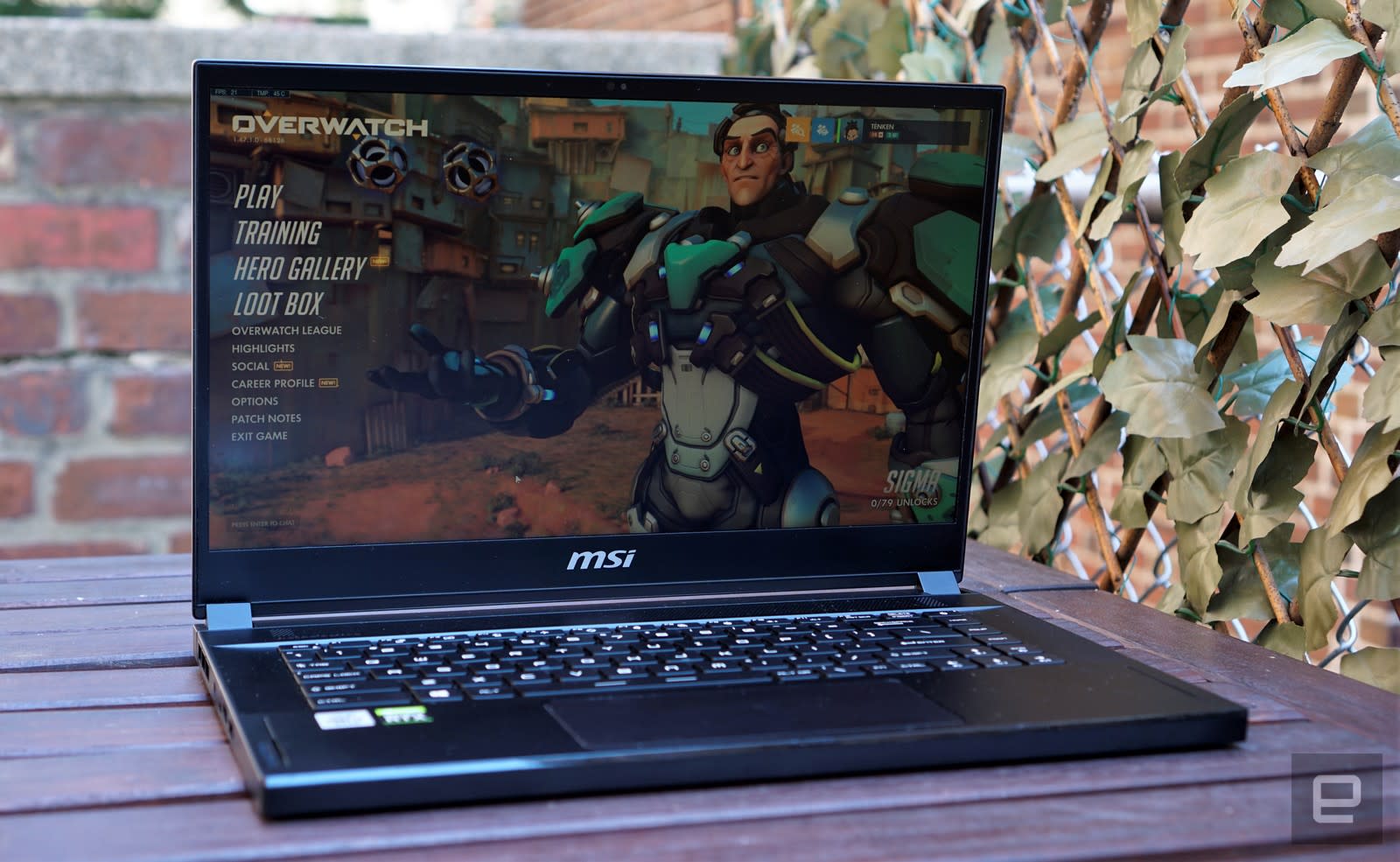 It’s a solid follow-up to the GS65, but it no longer stands out.

MSI wowed us with the GS65 Stealth Thin two years ago -- it was the lightest gaming laptop we'd ever seen, with a sleek design and some powerful hardware. So you'd think its sequel, the GS66 Stealth, would easily be a slam dunk. But the gaming laptop market is a bit different now in 2020. We've seen genuine ultraportable options like Razer's Blade Stealth, and ASUS's Zephyrus G14 also delivers a solid combination of power and portability. The GS66 is still a solid effort from MSI, especially since it features a fast 300Hz screen in a light package, but it doesn't stand out nearly as much as its predecessor.

Let's start with the obvious changes: MSI kept the same thin and sturdy aluminum case as before, but now it's clad entirely in black. There aren't any gold accents, and aside from the keyboard there aren't any LED lights either. There's just inky darkness everywhere you look. The GS66 really lives up to its stealth name -- nobody is going to be able to tell this is a gaming machine just by looking at it. That's useful if you ever want to bring it to school or use it in a coffee shop without immediately broadcasting to everyone that you spend most evenings playing League of Legends. (Not that there’s anything wrong with that.)

The real star of the show is the new 300Hz 1080p 15.6-inch screen, a healthy bump up from the 144Hz display we saw in the last model. As we learned at CES, that's going to be the new killer spec for gaming screens throughout 2020. The real question though, is if you'll actually notice the additional speed. And after spending several hours in Overwatch, it's honestly hard to tell. Sure, everything still looks smooth as my FPS counter creeps past 200FPS, but I'm hard pressed to see a functional difference. And compared to the Zephryus G14's 120Hz screen, I mainly noticed that the GS66's larger screen felt more immersive. 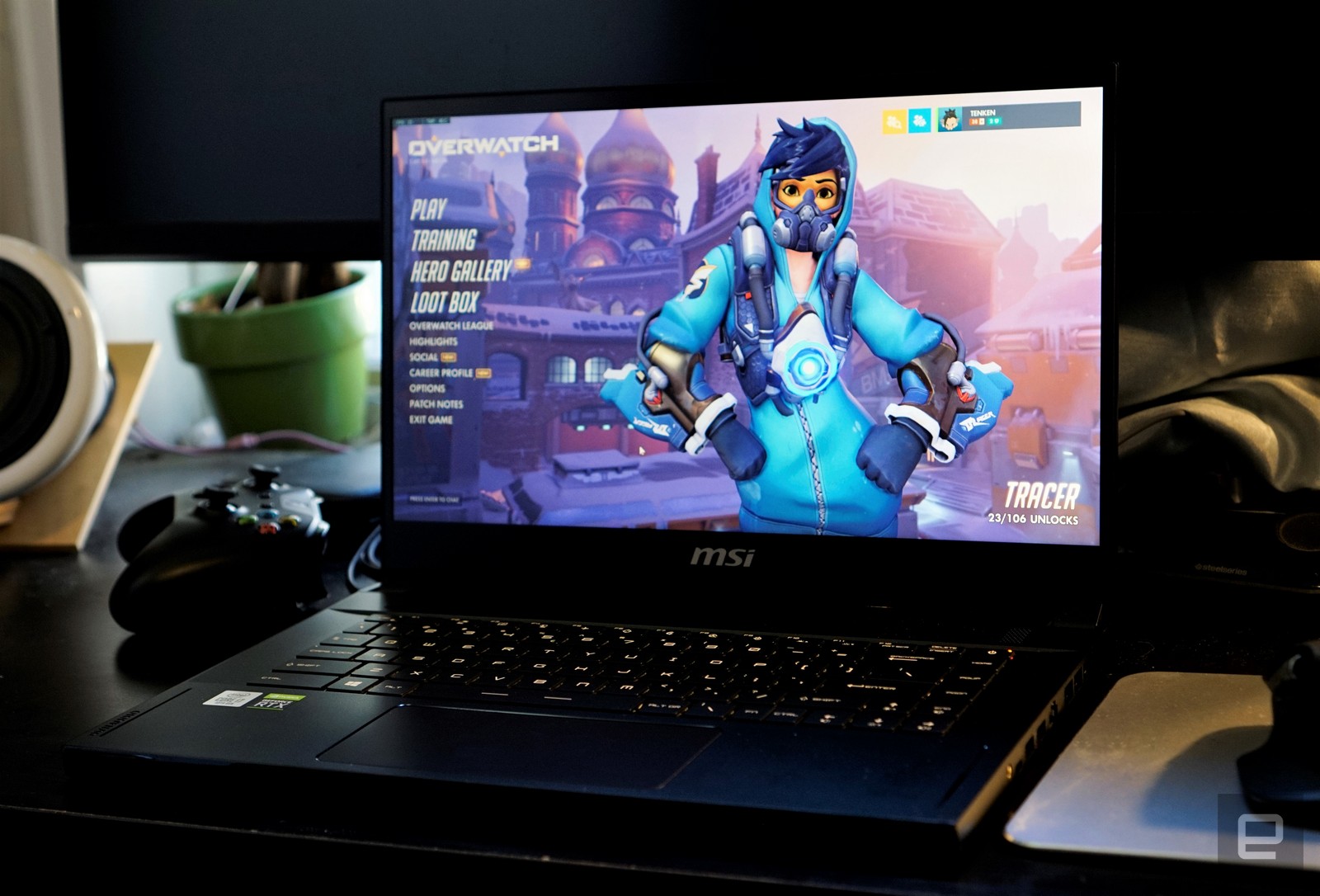 Then again, I'm not a budding esports player, which is the key demographic MSI and other laptop makers are aiming for. The idea is that having smoother gameplay and more responsive screens could give you an advantage during heated multiplayer matches. And while that's true to a point, there's also clearly a diminishing rate of returns. 120Hz and 144Hz screens looked dramatically better than the 60Hz displays we've been staring at for years. But the leap to 300Hz (and arguably even 240Hz) is something that'll only benefit the most obsessive gamers and actual esports pros.

Aside from the refresh rate, the GS66's display is crisp and colorful. While you're not buying a machine like this just to watch Netflix, streaming video still looks great. (It's a shame there's no HDR support though.) As with every high refresh rate screen, doing just about anything on the GS66 feels incredibly smooth. It doesn't matter if you're scrolling through webpages or plain text documents. It's like using a hot rod to get the groceries -- it's definitely overkill, but it sure feels cool.

The GS66 feels a bit like a hot rod when it's under pressure too -- the keyboard area gets noticeably warm while gaming, and the undercarriage sometimes becomes too hot to touch. It’s something you’ll definitely want to keep far away from your lap after any Overwatch session. It's pretty clear that's a result of cramming powerful gear into a very thin case. At least it stays pretty cool internally though: the CPU and GPU rarely went beyond 80 celsius at full load.

Under the hood, you'll find the latest and greatest hardware, including Intel's new 10th generation chips and NVIDIA's RTX graphics. Our review unit featured a Core i7-10750H, an RTX 2070 Super Max-Q and a healthy 32GB of RAM. Yes, it screams. I saw between 200 and 275FPS in Overwatch with high graphics settings, and around 100-130FPS with "epic" quality. Esports players typically favor higher framerates over graphical fidelity, so that performance disparity shouldn’t be a huge deal. In Destiny 2, I clocked between 100 and 140FPS with both high and medium graphics settings. That puts it above the Zephyrus G14, but that's no surprise since that machine had a slower RTX 2060 GPU. 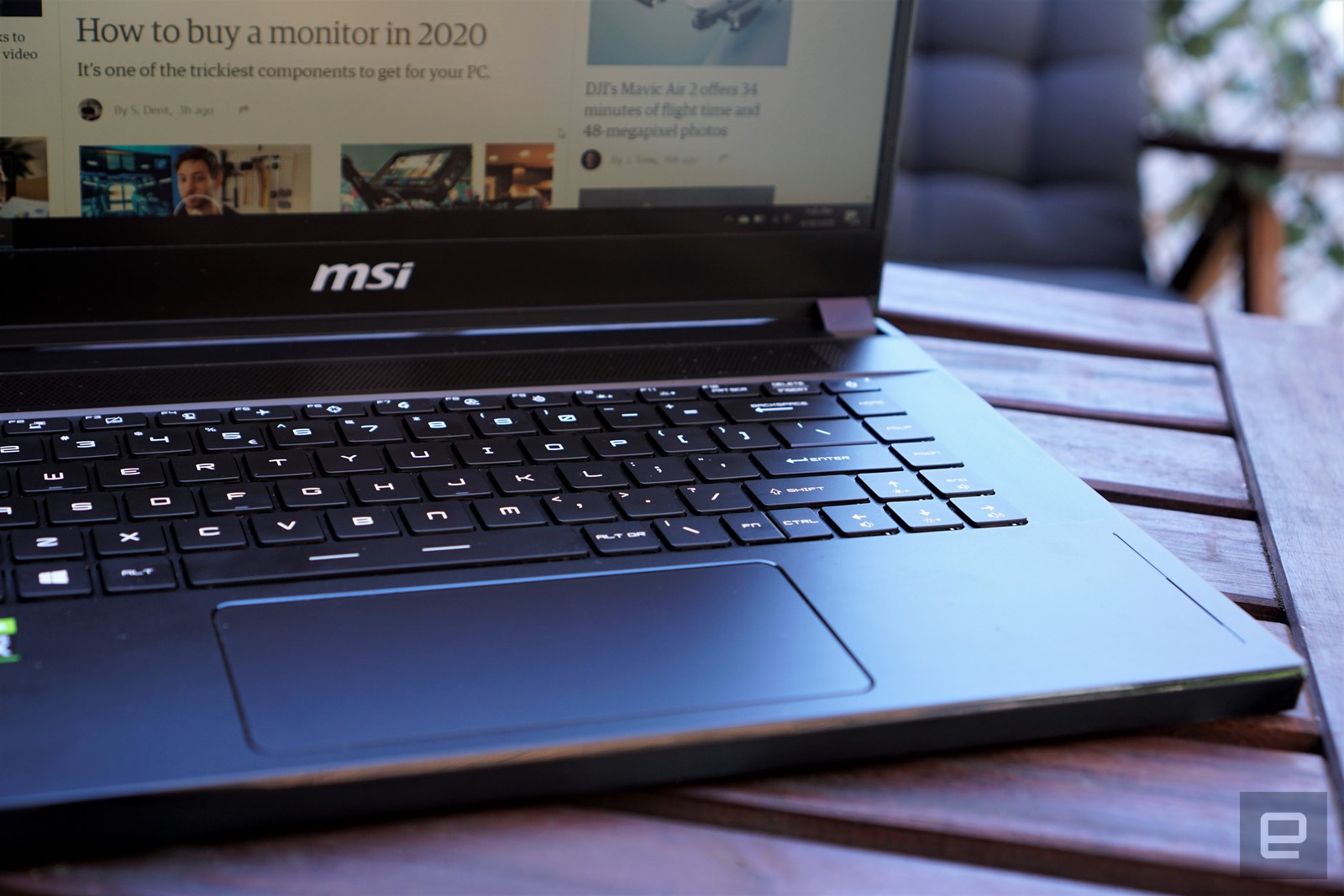 At least you won't have to be an esports fanatic to appreciate the GS66's keyboard. Developed together with SteelSeries, it features 1.5 millimeters of travel, around 30 percent more than before, and per-key RGB lighting. The wide layout works well for shooters and general typing alike. I also appreciated the large key caps, which were easier to hit than the Zephyrus G14's cramped layout. MSI made some curious key placement choices, though, which might irk some users. The right shift key is annoyingly narrow, and I always had to double check to make sure I was hitting the half-width function and control keys below it correctly. And unfortunately, there aren't any media controls.

Thankfully, MSI overhauled my biggest gripe with the GS65: a narrow and stiff trackpad. The new machine's pad is wider and noticeably more responsive. While you wouldn't really use it for gaming, it makes the GS66 a far more capable productivity machine. Mostly, I just appreciate it can actually distinguish between left and right clicks now. The speakers also sound significantly louder than the last model, and there’s a decent amount of detail for music and basic gaming. (But of course you’re always better off with headphones and separate speakers.) 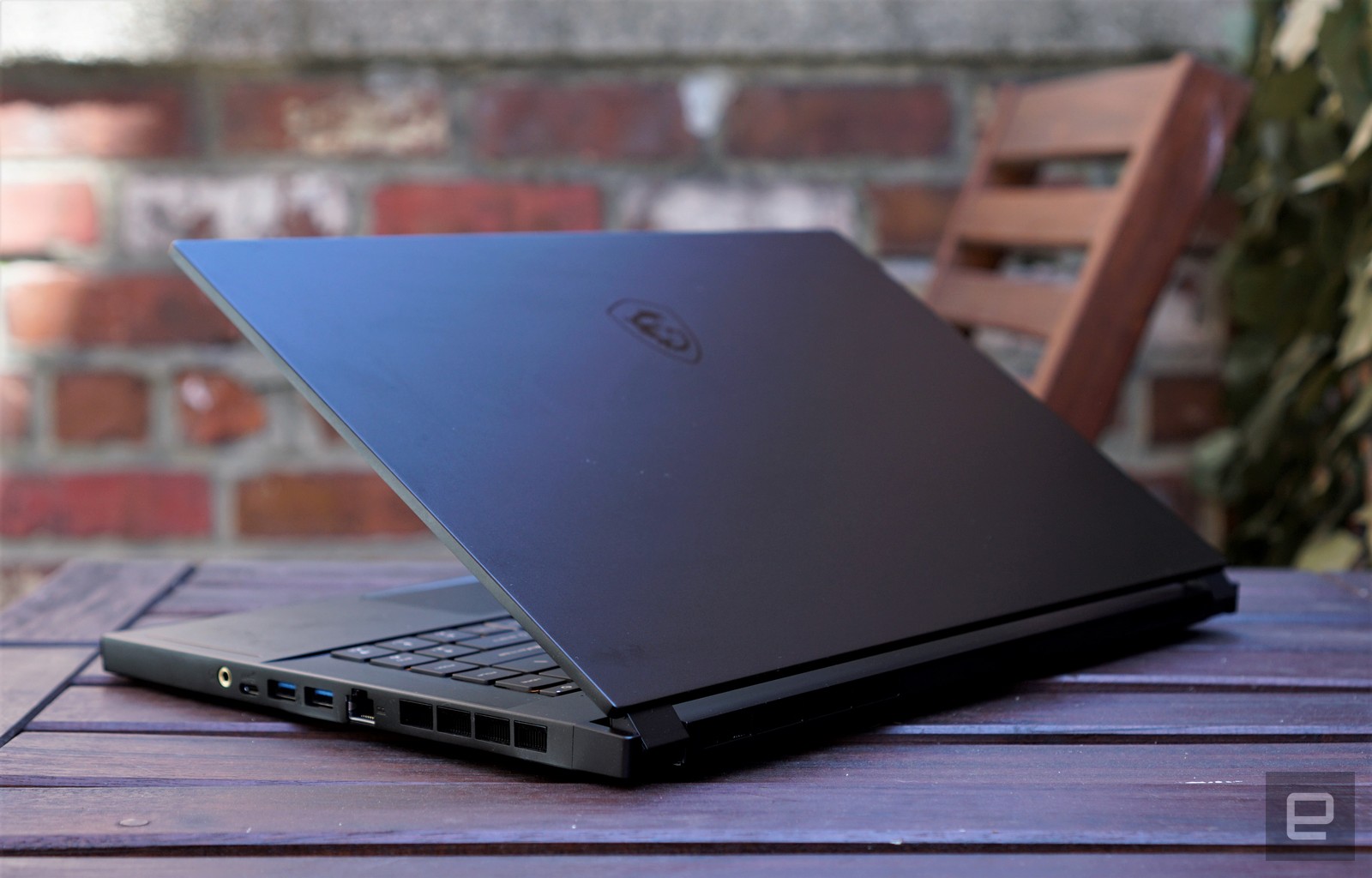 Unfortunately, all of the GS66's upgrades added a bit more heft to the machine. It's now 4.6 pounds, instead of the previous model's 4.1 pounds. That does take away from Stealth brand's luster a bit, especially when you consider a machine like the Zephyrus G14 weighs just 3.5 pounds. Still, MSI is competitive -- Razer's Blade 15 clocks in at the same weight as the GS66. And given its size, it also offers most of the ports that you'd want, including two USB-C ports, one of which supports Thunderbolt 3; three USB 3.0 Type-A; full-sized HDMI; and a 2.5 gigabit Ethernet connection. You can also upgrade the RAM and two NVMe SSD slots by removing the bottom of the case. It takes a bit of fiddling to pry the bottom off, given the tight fit, but at least you can add more hardware down the line.

MSI also crammed in a 99.9 WHr battery, the largest size possible that still fits under the FAA's regulation for in-flight usage. During our battery test, which involves looping an HD video, it lasted a respectable seven hours and 29 minutes. While that's more than the seven hours we saw on the GS65, it's less impressive considering we just clocked 12 hours and 45 minutes on the Zephyrus G14. I wouldn't expect any high performance laptop to last that long while gaming, but it's still nice to get more uptime for productivity work.

While it's a shame MSI couldn't hit the same high note it did a few years ago, the GS66 isn't a bad machine by any means. It's more like the industry has finally caught up to its high benchmark.