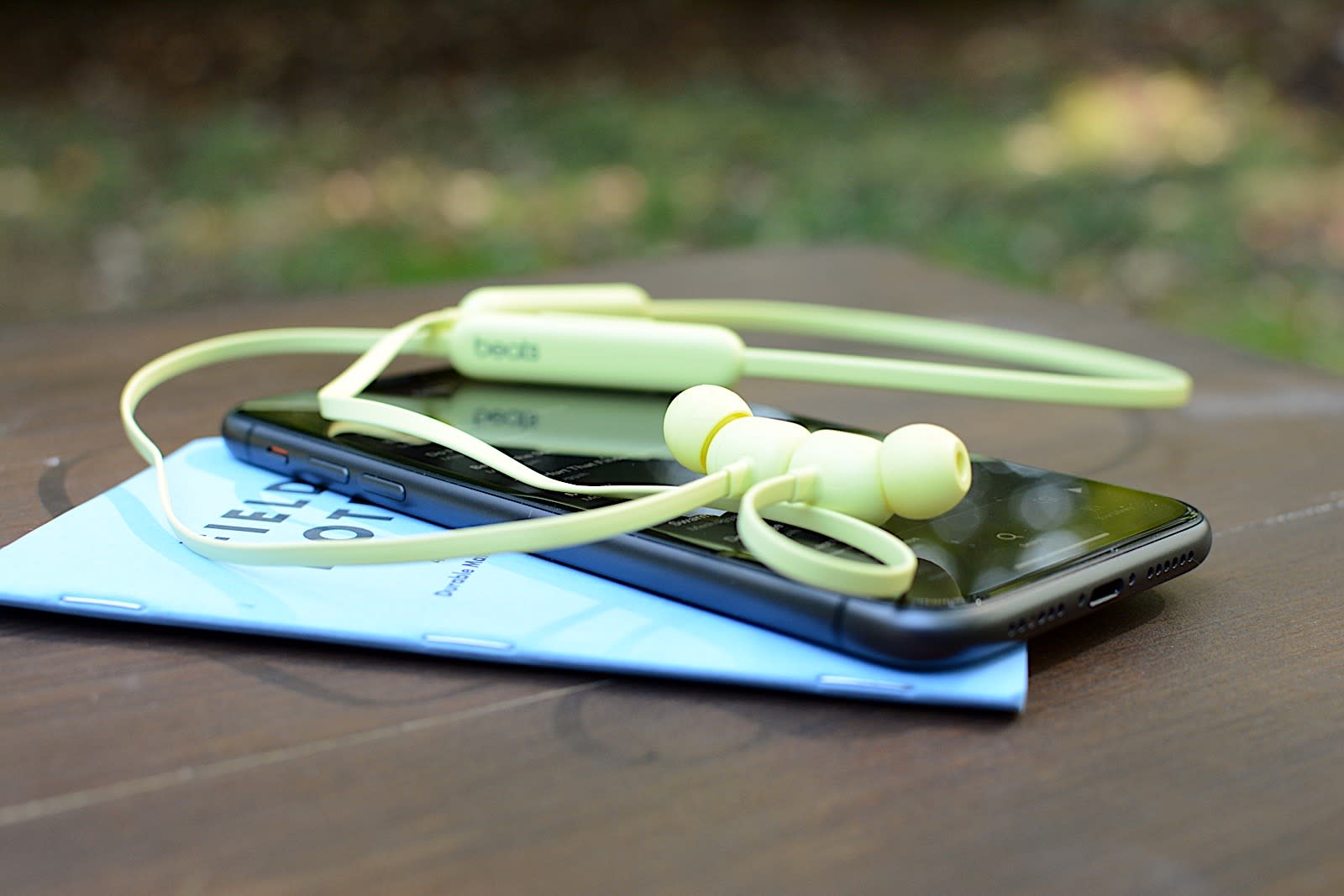 When the rumors began to swirl that Apple was going to stop including a set of wired earbuds in the box with the iPhone 12, we should’ve seen this coming. The day of Apple’s event, the company’s audio subsidiary Beats announced a set of cheap wireless earbuds that give users a low-cost option. At $50, the Beats Flex covers the basics with a smattering of on-board controls, a different take on automatic pausing and AirPods-quality quick pairing. Unfortunately, features aren’t everything, and there’s one key element the Flex doesn’t do well.

The Beats Flex looks a lot like its pricier predecessor, the $150 BeatsX. They’re still behind-the neck wireless earbuds -- or as I like to call them, neckbuds. Visually, the main difference is the company moved the on-board controls from the cable that attaches to the left bud down to the thin pod on the end of the neckband. That band that rests on your collar is where the Flex gets its name. Beats says this “Flex-Form” cable is made of nitinol, or nickel titanium. It’s more rigid than a regular earbud wire, but it’s super lightweight, and thanks to that design choice you don’t have a piece of plastic sitting behind your neck. It’s also coated in the same matte, soft-touch material as the rest of the Flex so it has a nice overall feel to it.

Turn on browser notifications to receive breaking news alerts from Engadget
You can disable notifications at any time in your settings menu.
Not now
Beats

Beats says this cable makes the Flex easy to coil up for storage. All the cables on these earbuds are flat, even the two more pliable ones that attach to the earbuds themselves. However, they don’t stay coiled once you wrap them up. The neckband portion kind of stays put, but those long, rounded rectangles make curling or winding awkward. I wasn’t ever able to figure out a method that remedied my frustration here. What’s more, the wires that connect the buds seem too long to me. The extra length either flares out from your face or hugs your jawline depending on which way you spin the earbud to put it in your ear. I understand Beats is aiming for universal fit for millions of potential users here, but for me, this created a pretty weird look I never got used to.

In terms of on-board controls, what you’ll use the most is located on the left side. A volume rocker is on the top edge of an oversized Tic Tac that houses some of the Flex’s components. Inside near the front edge is a single circular multi-function button. That control handles play/pause (single press), skipping tracks forward (double press), returning to the previous song (triple press) and summoning your virtual assistant (long press). Because these are all physical buttons, they’re reliable and easy to use. Even when you have to double- or triple-press, the Flex receives each command without issue. Also on the left side is the microphone for calls, just above the multi-function button. And on the bottom ridge is the USB-C port for charging.

In the interest of symmetry, and I would assume to help with battery life, there’s a second rectangular casing on the right side. It holds the power button on the bottom ridge -- exactly opposite the USB jack. The button also has a multi-color LED that lets you know when the Flex is charging, connected or in pairing mode. And its location, resting against your collarbone, means you won’t mistake the power control for the volume buttons on the top of the other side.

Perhaps the most notable design element is the magnetic earbuds. The back of the buds will snap together when they dangle down from your neck. While the Flex doesn’t have wear detection that automatically pauses when you remove them from your ears, they will pause when the two earbuds are stuck together. And the audio will resume on its own when you pull them apart. Most of the time when you take them out and drop them down to your chest, they tend to find each other on their own -- at least that was the case for me.

In the early days, Beats headphones were notorious for massive, booming -- but almost painfully overbearing -- bass tuning. The company has opted for a more even-handed approach as of late, and the Flex continues that trend. There’s a decent amount of bass here, but these earbuds lack the pleasant thump that can keep you energized at the gym. Ditto for appropriately recreating the kick drum or drum machine from your favorite artists. I’d even say this is the least amount of low-end tone I recall in a Beats product. Sure, these are meant to have general appeal, and the tuning is certainly more middle of the road.

The Flex’s sound profile also favors vocals and spoken content. This is great if you’re watching a movie or TV, or listening to a podcast. It’s not the best when you want to blast the bombastic hip-hop of Run The Jewels. The lack of appropriately boomy bass at times also impacts kick drums from metal bands like Gojira, sucking a ton of energy out of the songs. They just feel flat, and that’s consistent across genres. Sometimes you can hear ample boom, others it can get lost from one song to the next. More atmospheric indie rock bands that create songs that have a lot of dimensionality don’t have that airy quality on the Flex. Artists like The Appleseed Cast that usually layer textures of drums, guitars, synths and more lack that carefully constructed spatial component on the Flex.

Compared to the $19 EarPods, Beats Flex is better when it comes to sound. Apple’s wired buds are a bit one-note with a primary emphasis on mids. The Flex has better clarity and more range to its tuning. Not to mention Beats’s new earbuds are more comfy due to the replaceable ear tips. All told, the Flex’s suite of features is impressive for a set of $50 earbuds, but unfortunately the overall audio quality is more what you’d expect for that price.

As is typical with Beats headphones, there’s no companion app on iOS with the Flex. Instead, the company includes everything right inside the Settings menu on iPhone and iPad. That means all you’ll have to do is turn on the Flex near your iOS (or iPadOS) device and a pairing pop-up will automatically be displayed. That message will also tell you the current battery level for the earbuds and allows you to connect to that phone or tablet quickly when you need to do so in the future. Right now, that pop-up card only says Beats Flex, but doesn’t have an image of the device. The company says the generic icon will be replaced in a pending iOS update.

The fast-pairing process is all handled by Apple’s W1 chip, the same component that brought it to the BeatsX and other Beats headphones. The W1 also syncs the Flex with iCloud, so the earbuds are ready to be used on any other Apple products you have linked to your account. More interestingly, the chip offers Audio Sharing: the ability to wirelessly stream whatever you’re listening to -- or the sound from whatever you’re watching -- to another set of Beats headphones or Apple AirPods. And, importantly, fast pairing works with the feature as well. All you have to do is bring a second audio accessory near the source device and they will connect in a flash. This works on iPhone, iPad and Apple TV. What’s more, each user can independently control their own volume.

On Android, you’ll need to download the Beats app from the Google Play Store. Once installed, you’ll have access to quick pairing, battery levels and any firmware updates that may come along in the future. What you can’t do on either iOS or Android is adjust the EQ or customize the on-board controls. The latter are pretty well sorted already, but the Flex could use a little help in the audio department. Of course, these are $50 earbuds, so it’s no surprise there’s not an adjustable equalizer. Beats hasn’t done that in the past, and the Flex would be a weird place to start.

Beats promises up to 12 hours on a charge with the Flex. That’s four more hours than the BeatsX, and about double what a lot of true wireless options will give you. Thankfully, I didn’t have any trouble getting to the full promised listening time. Like its other headphones and earbuds, Beats included its Fast Fuel quick charging feature. Here, you’ll get an hour and a half of use if you charge for just 10 minutes. Handy if you’re heading out for a run and you forgot to charge beforehand.

At $50, the Beats Flex is an attractive proposition price-wise, but there are some solid alternatives in that price range. If you like wireless earbuds that are attached with a cable, I like Jaybird’s Tarah. They debuted at $100 in 2018, but now they’re regularly available for $50 or less. Plus, they’re designed for workouts, so you don’t have to worry about mucking these up. One downside is they only last for six hours on a charge.

The new Powerbeats are also worth a look. They’re three times more expensive than the Flex at $150, but the audio is so much better. They also pack in the latest Apple Bluetooth chip, the H1, so you get access to things like hands-free Siri on top of the quick-pairing. They still have the wired-wireless style similar to the Flex and 15 hours of play time. However, you do have to decide if the over-the-ear hook design is something you can live with on your earbuds. It will be just fine for many, but it causes problems for those who wear glasses and hats.

With the Flex, Beats accomplished what it set out to do. The company is offering a low-cost option for anyone who’s looking for wireless earbuds and doesn’t want to spend a lot of money. Especially those people who are looking for something to replace the Earpods that Apple no longer gives them for free with a new iPhone. Plus, Beats managed to pack features like quick pairing that go beyond the basic on-board controls. And it included great battery life to just round out a solid features list. But even at $50, you have to be willing to make some sacrifices -- mostly in the audio department. At the end of the day, the Beats Flex works well, and sounds okay enough to be just fine for a lot of people. Others will be left wanting more.