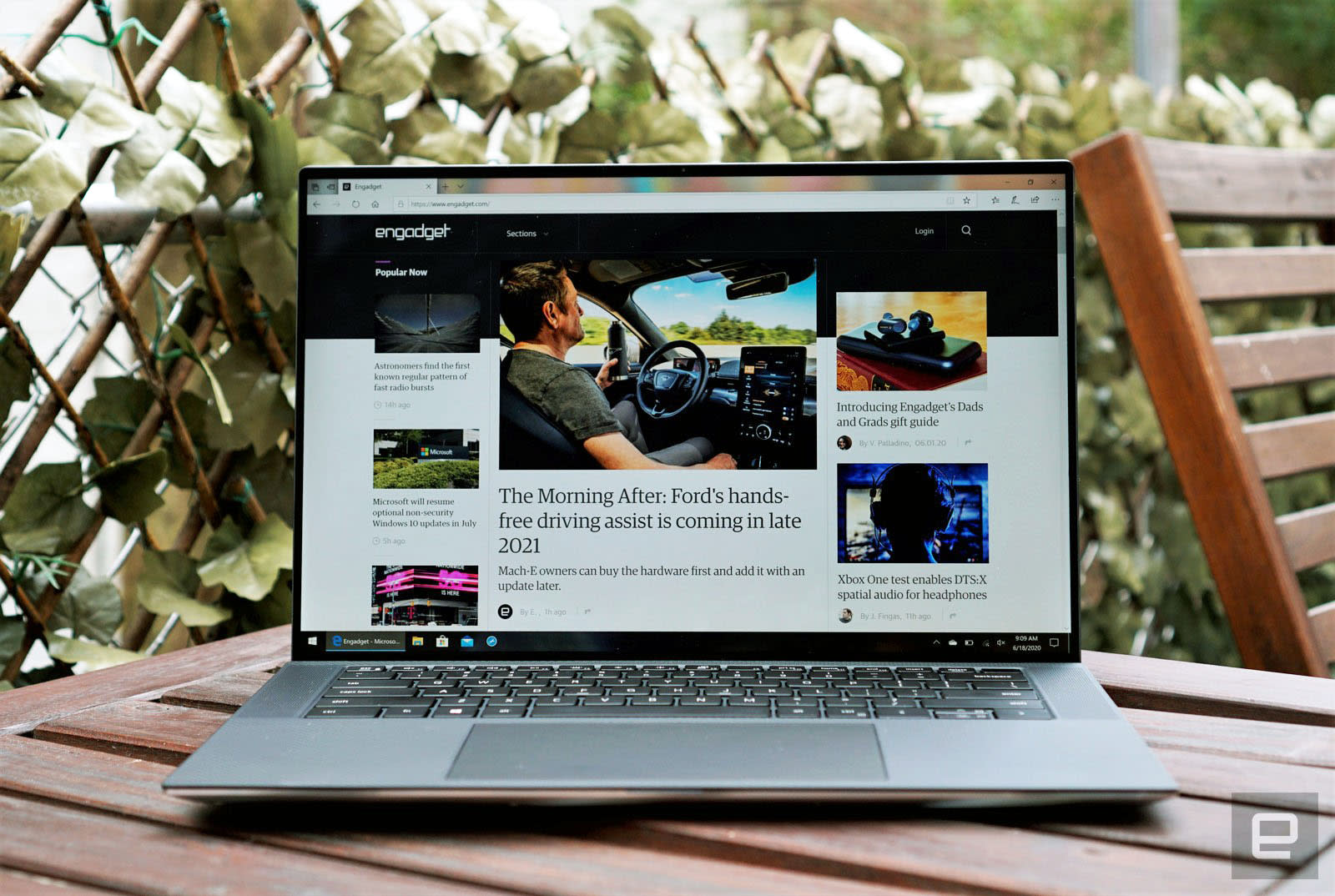 It finally gets the redesign we've been waiting for.

For the past few years, it's seemed like Dell just forgot about the XPS 15. While the XPS 13 and XPS 13 2-in-1 have evolved into some of the most polished ultrabooks we've ever seen, their larger sibling was cursed with a boring and chunky look. That all changes this year. The latest XPS 15 features all of the modern design tweaks we've loved in the 13-inch models: a larger screen with incredibly thin bezels and Dolby Vision support; a slimmer and lighter case; and an improved keyboard and trackpad. All of those upgrades add up to one of the best 15-inch laptops we've ever seen.

And no, I'm not being hyperbolic — I gasped the first time I opened up the XPS 15. Its huge display feels like you're staring at the towering monolith from 2001: A Space Odyssey. (And yes, I know the XPS 17 is also getting the same design, and I'm sure it'll floor me all over again.) Just like the XPS 13, the display reaches all the way down to the keyboard. There's no more bottom border getting in the way. The XPS 15 features a screen-to-body ratio of 93.9 percent, which means that its bezels are so thin they're practically invisible. In fact, that's even a higher ratio than the XPS 13. I'm still dreaming of the day when bezels disappear completely, but the XPS 15 feels close enough for now.

The laptop's 15.6-inch screen is 5 percent larger than before and has a taller 16x10 aspect ratio. That gives the XPS 15 a bit more breathing room for juggling multiple windows and scrolling through large documents. Larger aspect ratios, like the 3x2 screens that Microsoft's Surface notebooks feature, are simply better for getting work done. These days, I have a hard time using 16x9 laptop screens for anything more than Netflix binges — they're just too cramped to be genuinely productive. 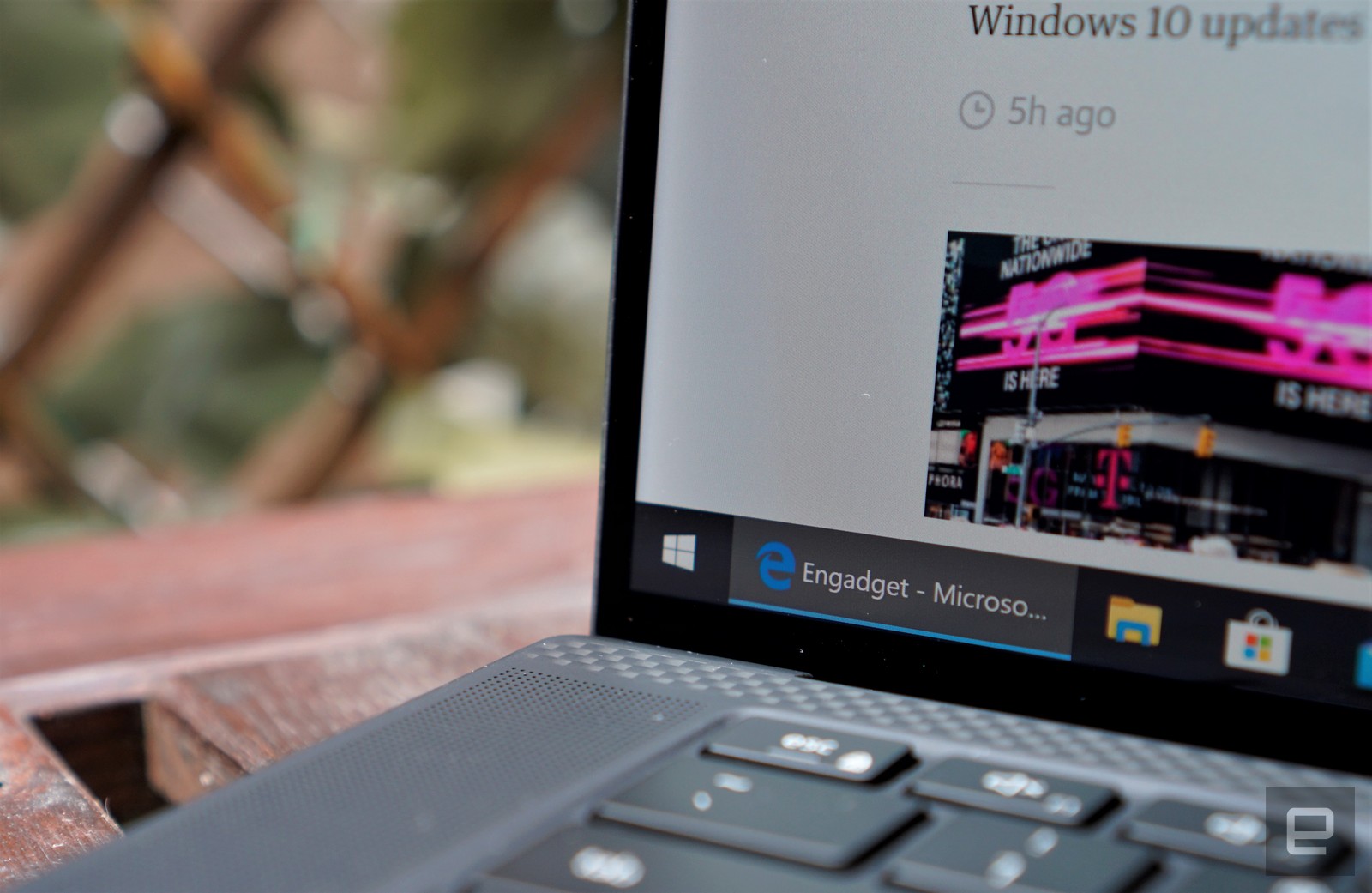 The XPS 15's screen comes in 1080p+ and 4K+ variants (the "plus" just means they've got a few more pixels to deal with that larger aspect ratio). Both displays support HDR and Dolby Vision, but the 4K+ model gets you better color accuracy with support for 100 percent of the Adobe RGB gamut and 94 percent of the DCI-P3 standard. That's also what our review unit came with, and it looks spectacular. Dell has been delivering some tremendous displays for years, but the inclusion of HDR and Dolby Vision support gives its screens a leg up over most laptops. Colors leap off the screen, bright elements shine even more, and darker scenes get added depth. The 4K+ display is perfect for streaming movies, but it's also well equipped for video editors who may need to craft content for 4K HDR TVs.

And even if you're just writing most of the time, you'll appreciate the XPS 15's improved keyboard. The key caps are nearly 10 percent larger than before, and they spread out more widely, which makes it feel like you're typing on a full-sized desktop keyboard. The trackpad is also 62 percent bigger, and it worked just as well handling precise photo edits as it did with multi-touch gestures. It's easy to feel spoiled with the plethora of great PC touchpads these days, but using this one is a reminder of how far we've come. 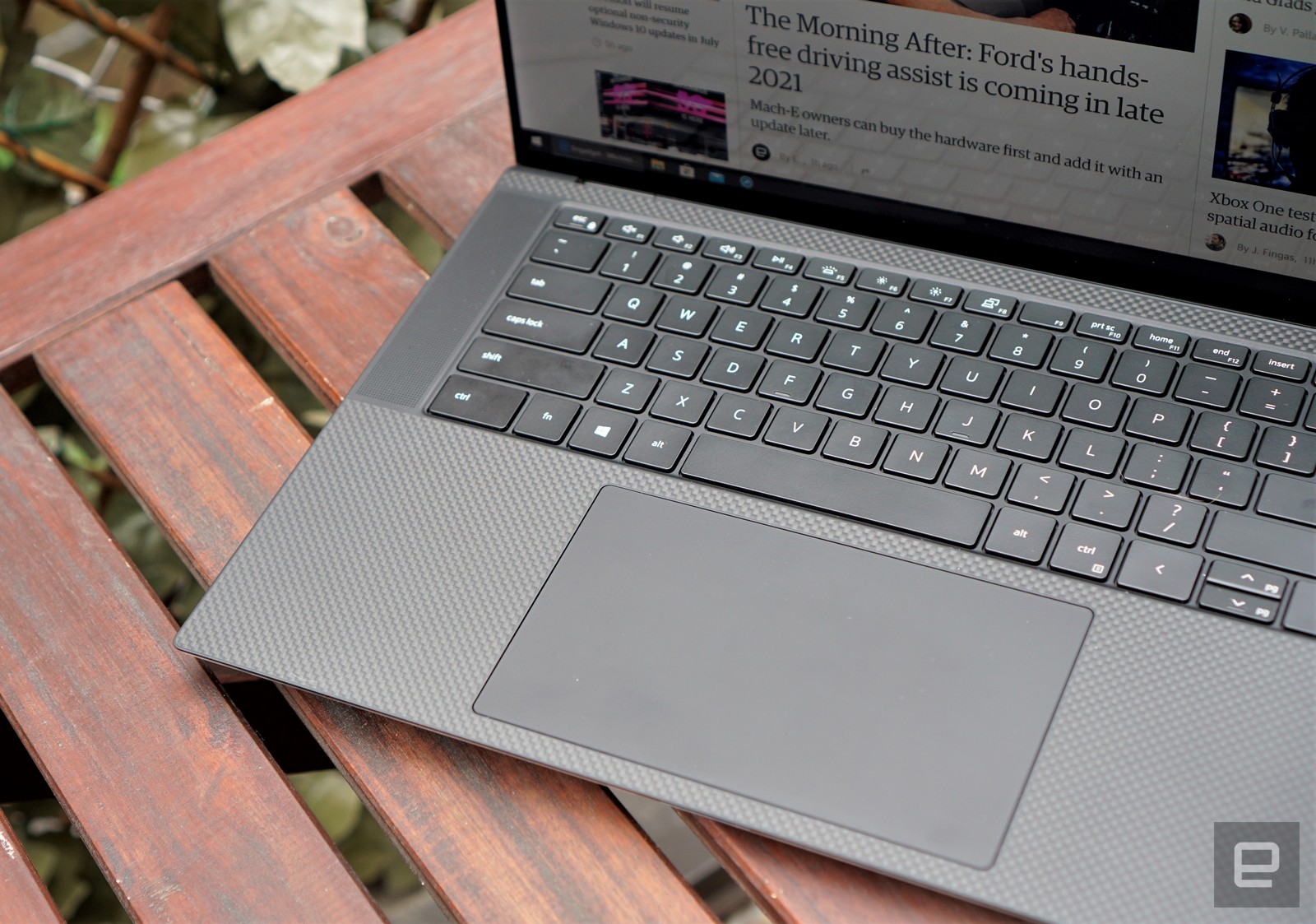 That sense of progress echoes throughout the XPS. It has the same sleek aluminum case as the XPS 13, as well as sturdy carbon fiber along the wrist rest and keyboard area. It's a far better machine for working on the go too, with an 18 millimeter thin case and a starting weight of four pounds. That's what you'll get with the non-touch screen and 56 WHr battery -- it bumps up to 4.5 pounds with a touchscreen and the larger battery. Sure that's a bit unfortunate, but it's necessary to have a decent running time with dedicated graphics. Our review unit had the larger battery, and we clocked 10 hours and 10 minutes of battery life during our benchmark.

Unfortunately, you'll lose out on port flexibility due to the XPS 15's thinner case. Now you'll get three USB-C ports, two of which support Thunderbolt 3, while the last is just a slower USB 3.1 connection. There's no more HDMI, Ethernet, or USB Type A (though Dell includes a USB C to A cable in the box). You'll have to go the USB-C hub route like the MacBook Pro and many other premium notebooks. While it would have been nice to get at least one more USB-C slot, or a flexible USB A port like we've seen on the HP Spectre x360, at least Dell kept the full-sized SD card reader. 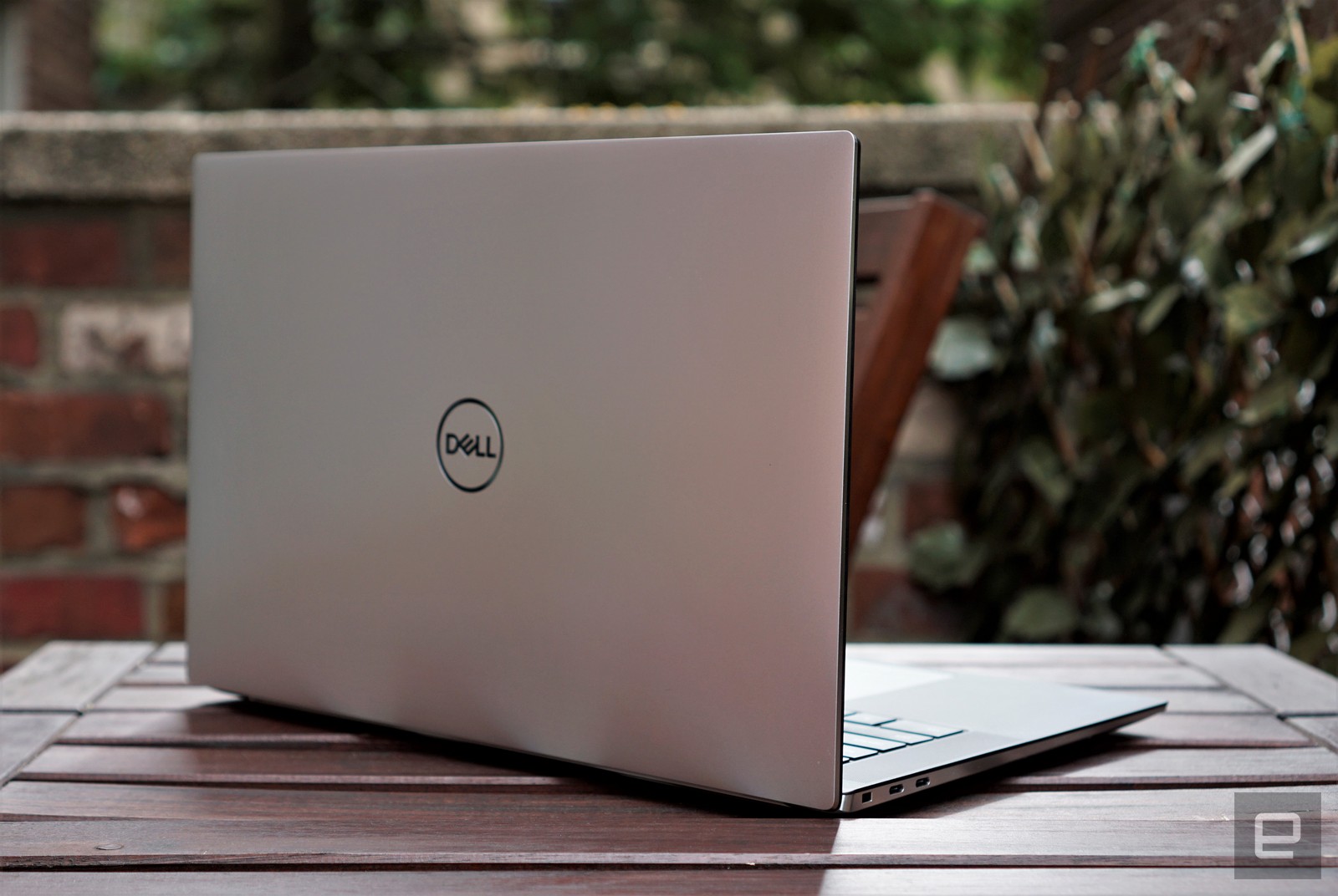 I'd wager you won't feel so bad about losing ports when you see just how fast the XPS 15 is. Our review unit featured Intel's eight-core i7-10875H CPU, NVIDIA's GTX 1650 Ti, 16GB of RAM and a 1TB SSD. You can configure it all the way up to the super-speedy Core i9 with 64GB of RAM. It easily trounced the Surface Book 3 in the PCMark 10 benchmark, especially when it came to multi-core testing (though the Surface’s faster GPU gave it a leg up in 3DMark). And it kept up with the ASUS Zephyrus G14 and the Intel NUC 9 Extreme, some of the fastest PCs we've seen this year.

The true test for a machine like this is real-world work, and it didn't have any trouble there either. The XPS 15 converted a one-minute 4K video clip into 1080p in 43 seconds with its CPU and 33 seconds with the NVIDIA GPU, which is on par with the powerful NUC 9 Extreme. Needless to say, it didn't have any trouble with my usual workflow, which involves juggling dozens of browser tabs, Slack, Evernote, Spotify and Audacity recordings. And while this isn't a machine you'd really get to play games, the GTX 1650 Ti is more than enough to play most modern titles like Overwatch in 1080p.

To get that performance, though, You'd have to go beyond the $1,300 base model, which only comes with 8GB of RAM and integrated graphics. We’d recommend jumping up to the $1,850 configuration for twice as much RAM, a six-core i7 processor and that NVIDIA GPU. That's a huge price jump, I know, but it'll make the XPS 15 last you a lot longer. Even then, it's still less than the MacBook Pro 16-inch, which starts at $2,400 but is admittedly more powerful. That XPS 15 configuration is also much cheaper than an upgraded Surface Book 3, which also has a lesser quad-core CPU. 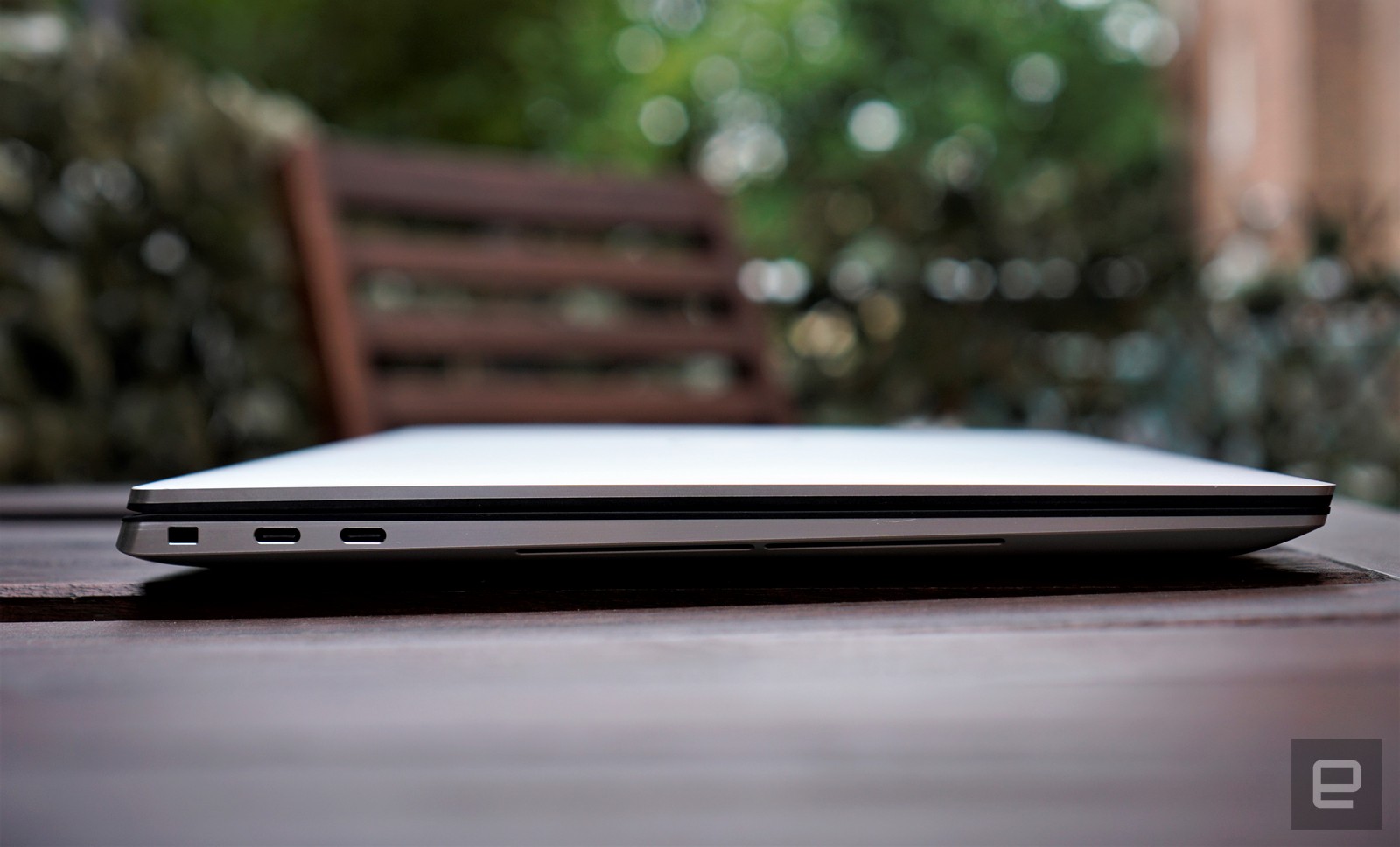 At the risk of sounding like a broken record, the XPS 15 is in many ways the ideal workhorse PC -- assuming you can live without legacy ports, and you don’t need the graphics rendering power from more advanced GPUs. It's tough to find an ultraportable 15-inch that's this polished from top to bottom. If you’re a photo or video editor or just someone who demands a bit more power than what you’d get from smaller ultraportables, you’ll find a lot to love with the XPS 15’s glorious big screen.