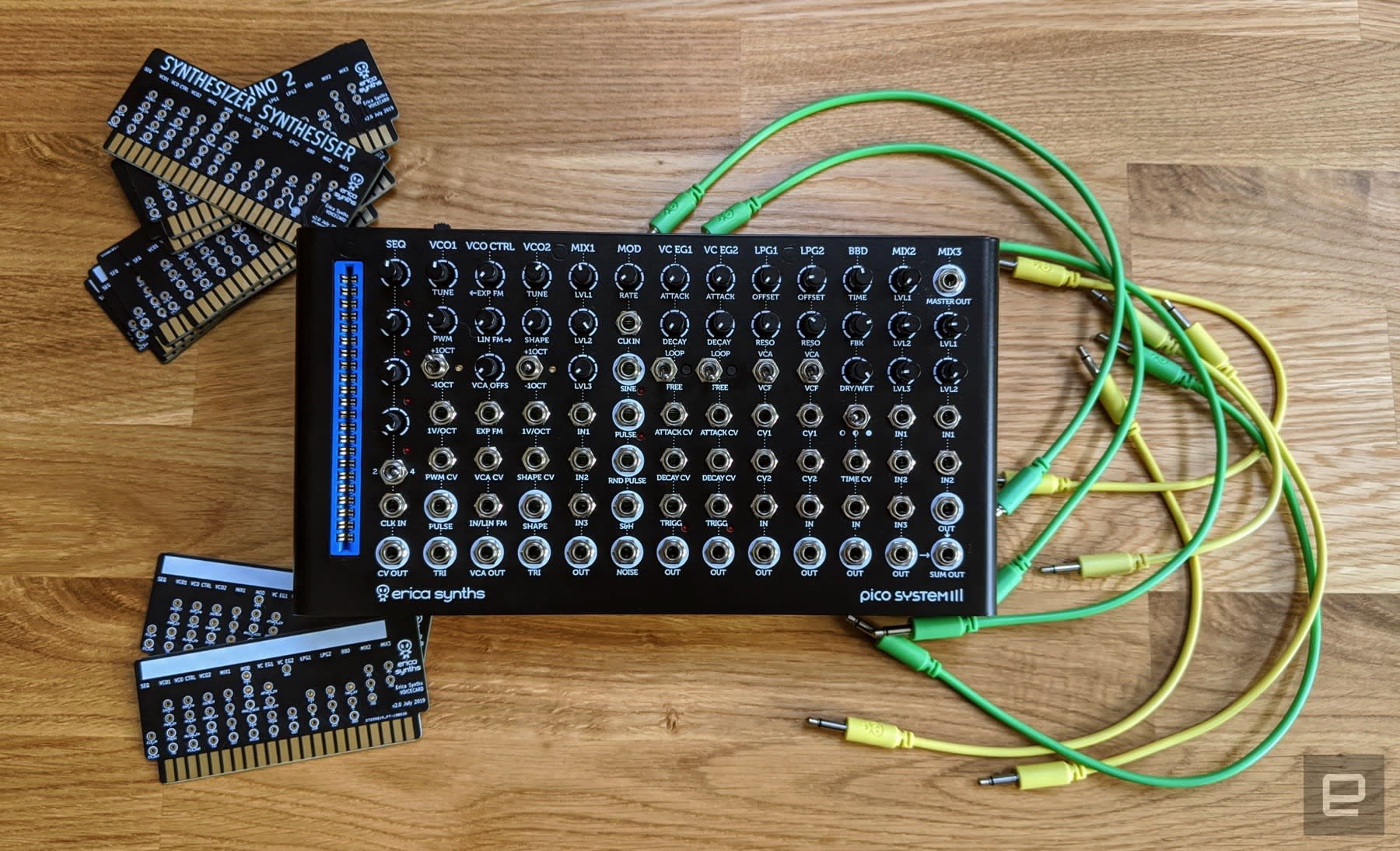 As a tool for sonic exploration and experimentation the Pico System III is a success.

Modular synths are definitely enjoying something of a revival. The reasons why aren’t important right now. Just know that it’s true. Problem is, modular synths are traditionally complicated and expensive. They're so expensive that you might wonder how anyone builds a massive eurorack system without the backing of a major music studio (or a large inheritance). So, for the last few years, a number of companies have been racing to lower that barrier to entry. After all, there won’t be anyone to buy niche $300 filter modules if consumers can’t get over that initial hump.

Most of those efforts have focused on semi-modular systems like Behringer’s Crave, the Volca Modular and Moog’s Mother family. These are self-contained instruments whose sound can be reshaped through patch cables. We’ve also seen companies like Cre8audio and Dreadbox offer true Eurorack components at beginner-friendly prices. Though, you still have to piece together a system from individual parts. 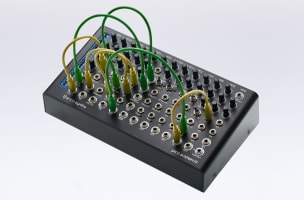 Erica Synths’ Pico System III takes a hybrid approach. It’s a true modular, in that it won't make any sound unless you patch together the proper pieces. But, it’s also a self-contained system that comes with everything you need to get started, rather than separate modules. It also marks the first time a Pico System has been priced for beginners. The Pico II is a proper, powerful Eurorack bundle in a stunningly small case. But its $1,200 price tag is big deterrent to those getting started.

At $529 (for the desktop model) the System III isn’t an impulse purchase, but it’s reasonably affordable for what it is. And, like the Volca Modular or 0-Coast, it has the added bonus of allowing you to explore West Coast synthesis, which also tends to have a high price of entry.

It’s worth noting that Erica Synths stripped a lot of features from the System II to reach this price. Most notably the digital sequencer, sample-based drum module and effects unit were replaced with simpler analog parts. Where the previous Pico was capable of creating full compositions, the System III is better for drones, simple arpeggios and sound effects.

That’s not to say that you can’t make more traditional music on the System III, it just requires a little patience. (An external keyboard or sequencer doesn’t hurt.) It took me a couple of weeks to start feeling comfortable with the Pico System, but once I accepted its limitations, learned a few tricks and brought other gear to the party, I really started having fun. The sound is unabashedly harsh. You can smooth out some of those rough edges, especially with effects pedals, but by design it’s a bit abrasive.

The System III has two oscillators, each with two different waveforms. Both have triangle waves and a second, slightly more complex option. For example, one has a pulse wave with pulse-width modulation for getting everything from classic bass sounds to video game chirps. The other has a variable shape wave, that careens from smooth triangle to atonal weirdness. And there are frequency modulation inputs for both oscillators, allowing you to get metallic clanks, divebombs and UFO effects. There’s also a noise source in the modulation section that allows you to add some grit if you want, but it’s pretty unnecessary most of the time. Instead, I found the noise much more useful when creating drums and rhythmic patterns.

The random pulse output in the mod section is also worth paying attention to. It’s great for adding dashes of randomness, especially to rhythmic patches, while saying in time. I particularly liked it for putting evolving bass drum sounds underneath a steady snare-ish noise hit.

The primary way you’ll control those oscillators (without external gear) is via the on-board sequencer. But be warned: it’s pretty limited. It has a switch for choosing two, three or four steps… and that’s it. It’s a far cry from the 16-steps often considered the bare minimum. If you think a little creatively though, the sequencer can prove quite useful. It’s not going to be great for building rich melodies or even exciting arpeggios. But it turns out you can clock the sequencer fast enough so it essentially becomes another oscillator. And, since this is modular, you can use the sequencer to control the filter, the time on the analog delay or use it as the FM modulator.

I’m not going to pretend that all of these things will immediately produce mind-blowing results. But it’s necessary to approach the Pico System, and any modular synth for that matter, with a spirit of experimentation. While the 31 knobs and 52 patch points on the front might seem intimidating at first, it’s important to realize it’s almost impossible to break it by connecting the cables incorrectly. The only thing in any real danger is your ears (and maybe your speakers) if you’re not careful with the volume.

The biggest hindrance to getting pleasing sounds out of the Pico is the lack of quantization on the sequencer and the tuning. That means you have to dial in notes by ear or with a tuner, which can be incredibly difficult with these tiny knobs. They have a massive range -- five octaves on the sequencer and two on the tuners. And that’s made even larger by the switches that transpose the oscillators between three different octave ranges. Dialing in a simple C Major triad arp, with both oscillators in unison, took 15 frustrating minutes. It was made even more difficult because I couldn’t figure out how to freeze the sequence to dial-in one step at a time. Instead I was stuck trying to tune the notes as they were buzzing by.

Things get much better when you hook up a keyboard or a sequencer that puts out CV (control voltage), like a KeyStep Pro. Being able to play melodies manually, trigger complex arpeggios and change them on the fly opened a whole new world of possibilities. With the Pico System’s sequencer dedicated to shaping timbre instead of playing notes things immediately became more interesting and rich. Though, sometimes, it was nice to use the sequencer for playing arpeggios on one oscillator, while playing bass notes on the other using the KeyStep to create new harmonies.

For further shaping your sounds there’s an LFO module, two envelopes (which have a looping function so they can act kinda like LFOs) and two low pass gates (LPG). If you’re more familiar with Moog-style east coast synthesis, LPGs can be a little confusing at first. They almost act like a combination of a voltage controlled amplifier (VCA) and a filter (VCF). The ones here can actually have a VCA-only mode, so if you don’t want those resonant pings and plucks that are so emblematic of west coast synthesis flipping the switch can help.

The resonance on these LPGs is pretty strong, though. They start to self oscillate pretty quickly. Which, on the plus side, means there’s two more sources of sound here (even though you can’t track them to a keyboard to play chromatically). On the downside, it does feel like the usable range of the filter is fairly limited.

The last piece in the sound sculpting puzzle here is the all-analog BBD (bucket brigade device) delay. While BBD delays are often cherished for their warm, sometimes lo-fi tones, the one here is a bit extreme. The controls are exactly what you’d expect -- time, feedback and a wet/dry knob. But there’s also a three position switch for a filter that cleans up noise and removes the higher frequencies. The manual says “at the right most position you will get authentic, unfiltered, bit noisy BBD sound.” This is an understatement. This is perhaps the noisiest BBD delay I’ve ever used. I find it almost unusable in unfiltered mode. And if you turn the time past 3’oclock you get a high pitched whine, even if there’s no sound incoming.

The maximum delay time is just 300ms, so if you’re looking for long thick repeats, you’re not going to get it here. For soft, slapback style echo, this will definitely do the job with the right settings. But, if you’ve got a dedicated delay pedal, you’re better off pairing the Pico System with that.

So right in this 5x9 inch box, you have sound sources, modulators, mixers and effects -- everything you need to get started learning modular synthesis. Erica Synths is even nice enough to include 20 patch cables of varying length. And if 20 sounds like a lot, don’t worry -- you will use them. But, one of the unique features of the Pico System III is the use of Buchla-style voice cards. These are pre-wired cards that you stick in (almost like a video game cartridge) to recreate patches without having to run cables all over again. There are five “preset” cards in the box, plus five blank cards for you to set up yourself.

This isn’t quite like dialing up a preset on your trusty Minilogue, though. Even with a voice card inserted, you still need to set the switches and dials to their appropriate positions. Erica helpfully includes overlays in the manual for both the factory preset and your creations so you can take notes. The downside of voice cards is, they require you to know how to solder. But, they do open a lot of opportunities for those who want to hack the system to do things it wasn’t designed to do originally. Of course, as you start building out a modular setup these DIY workarounds become less necessary. Still, if you’re adventurous, the ability to not just connect parts, but stick potentiometers, capacitors or resistor in between them for further manipulation might be interesting.

Of course, as much as I love soldering and making strange videogame noises, the whole purpose of a musical instrument is to, well, make music. And this is where the Pico System runs into the same problem for me as the Vola Modular: It can be very difficult to tame. Generating a sound and sampling it as a one hit for use in my DAW is great, but the Pico never felt “playable” in the traditional sense.

The sounds it generates are richer and more compelling than what you can get out of the Volca, but Korg’s west coast modular has the vastly superior sequencer and a keyboard that can be quantized to any scale you choose. And at $200 it’s far more affordable for someone just looking to dabble.

The $499 0-Coast from Make Noise is another option for getting into modular. It’s a little less traditional than the Pico and has fewer patch points. But built-in MIDI control and an arpeggiator instead of an unquantized sequencer make it easier to start crafting melodies right out of the box.

As a tool for sonic exploration and experimentation the Pico System III is a huge success. It’s small, approachable, reasonably affordable and tons of fun. If you’re just looking to play thick synth basslines though, this is not for you. But if you’re considering the Pico System III at all, chances are it’s because you’re looking to push the limits of your musical comfort zone. And for that, it’s pretty good.