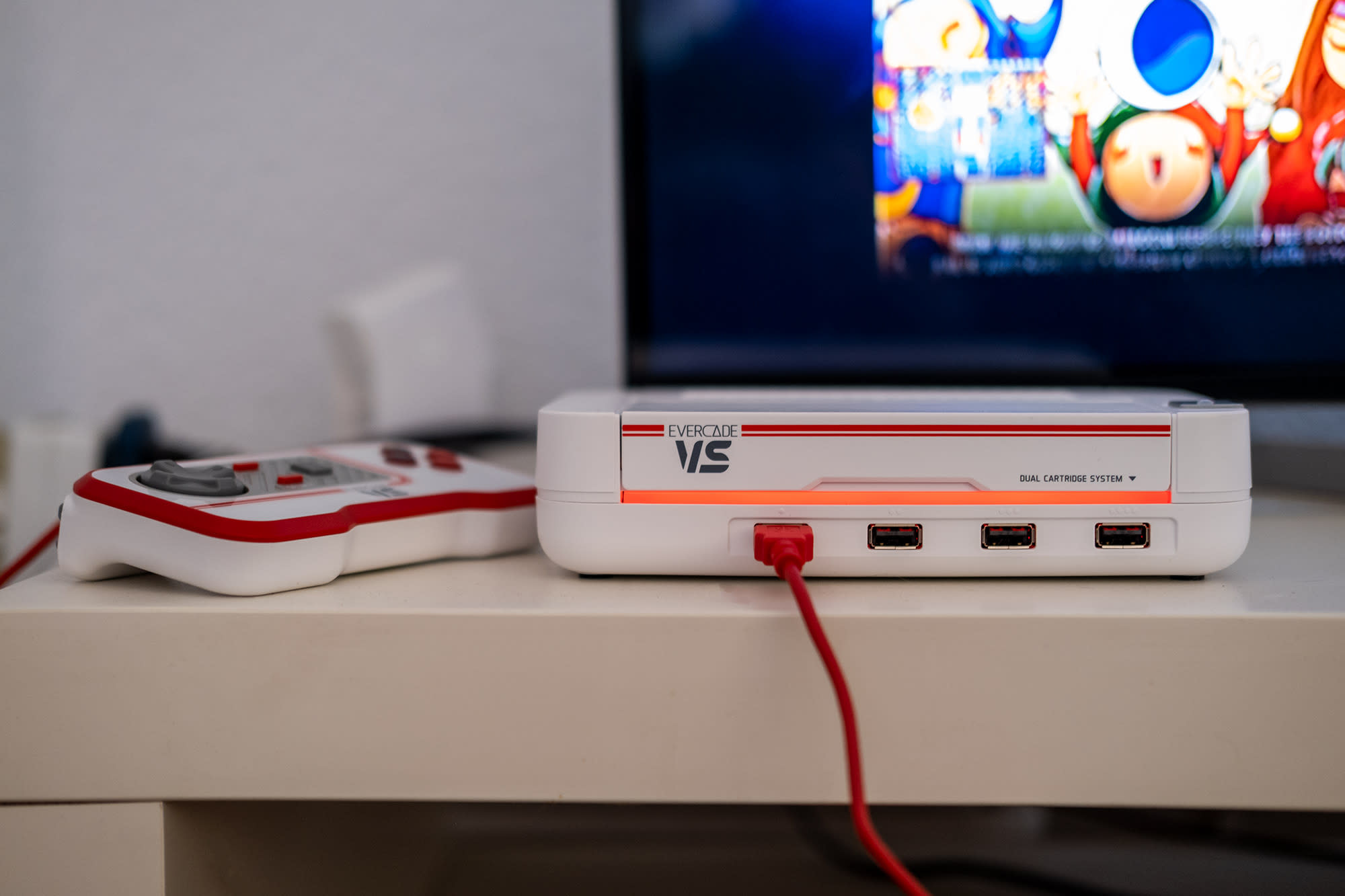 The Evercade VS captures the spirit of retro gaming

The cartridge-based retro console has many secrets to unlock.

Between 2016 and 2019, retro gaming had a moment. I mean another moment. A very specific one where gaming’s greatest all released “mini” versions of their most iconic consoles. NES? Yep. SNES? Sure. Genesis? You bet. And, of course, Sony, SNK, Konami and even Commodore (sorta) got in on the trend too.

Then there was Evercade in 2020 — a refreshingly different take on the new-but-old console idea. Instead of a “mini” version of vintage hardware, it was a new handheld that took cartridges. Each cartridge contained a collection of classic games from different developers. I enjoyed it when I reviewed it.

The idea of potentially unlimited games through actual cartridges was both clever and brave. (Retro gamers aren’t so known for paying for titles, especially the lesser-known “gems” that Evercade was able to license.) Either way, the idea must have caught on as the company soon revealed plans for a more traditional home console version. It’s finally here and it brings a few interesting perks over its handheld sibling.

The Evercade VS (as the $99 system is called) shares the same cartridge format as the handheld, so you won’t need to re-buy anything. In fact, you can play on one, save your game and pick it up on the other (just like you’d hope, to be fair). It’s worth mentioning that two titles (both Namco collections) are only compatible with the handheld due to licensing issues.

There are other perks to the home-based console, too. Most notably support for multiplayer (up to four players where games support it), WiFi for over-the-air updates and a jazzy new interface. Oh, and the VS can hold two cartridges at a time, meaning you can be working on one game and leave it there while you play another, or simply just have more games to choose from on your home screen at any one time — handy given that every single cartridge Evercade offers is a multicart. The carts are even hot-swappable so you don’t need to restart the system, just slot a new one right in and away you go.

As is tradition with this new wave of retro home consoles, the VS is small and light. So light, you’ll definitely want to make sure your HDMI cable has some slack in it, else it’ll lift the VS off the ground or pull it back behind your TV. The good news is that almost any USB port will power it. My not-very-good seven-year-old LG TV can easily power the VS through its USB ports, meaning I don’t have to occupy another outlet.

The VS looks like a direct relative of the original Evercade with the same vintage white and red decals and a dash of gray here and there for buttons. One nice little touch is the NES-style “flap” that covers the cartridge slots. This does mean you don’t get the old-school vibes of having a cartridge poking out the top, but at least your games are safely hidden from the elements. But homages to old consoles like that seem to matter to fans of the classics. It weirdly matters a lot. Even if that’s the laborious ritual of having to get off the couch to change the games or power it down. Nostalgia isn’t always about the good things.

Fire the VS up and you’ll be presented with a Netflix-like menu of all the titles on whatever cartridges are inserted. The handheld, with its limited screen size, had you flip through each title one by one. Here, they’re laid out in rows with full cover art. Click through and you’ll be presented a little more info about the game and its controls along with the option to play it (naturally) or pick up where you left off with your most recent save.

Evercade has tried to strike a balance between modern features and retro authenticity. Save states are one modern concession but most other things — such as cheat codes or in-game recording — are absent. The same goes for the visual look and feel. Under the settings menu, you have three display options: Original Ratio, Pixel Perfect and Full Screen. It’s always nice to have options as modern TVs are very different to what you might have plugged the original hardware into.

You can, of course, add scanlines (if you must). There are also some options for different themes and backgrounds, etcetera. But all told, the menu is simple and clear and all the better for it.

When the handheld launched, the library of cartridges and games was decent but modest. There were collections from mainstays like Atari, Namco and Interplay. These held some classics like Pac-Man, Earthworm Jim and Crystal Castles. Then there were bundles from newer developers that have scooped up various IPs over the years. These tend to hold more “hidden gems” like Piko’s Dragon View (a solid RPG first published by Kemco). In fact, the VS comes bundled with two of these collections to get you going (one from Data East and one from Technos).

Along with these well- and lesser-known golden oldies are some collections of new 8- and 16-bit games. The net result is that the Evercade had the foundations to become something of an all-inclusive retro experience with new and old titles side by side. Now, with the Evercade VS, the company has added a new line of arcade-first collections denoted by their purple (rather than red) packaging. Here you’ll find button-mashers like Double Dragon 2 and Bad Dudes vs DragonNinja to further round out the library.

One intriguing option in the menu is “Secret.” Here you’ll be asked to enter a code. What the code/s is/are, well, a secret, but one can presume it unlocks some extra games or content. Along the same theme, there are hidden games on the console itself a-la Snail Maze on the Sega Master System.

And… there are more things to unlock, too. Evercade has hinted that certain cartridge combinations, when inserted together, will unlock hidden titles. I was able to find two such secret games with the cartridges I have here, and there are definitely more. I won’t spoil things by saying exactly how you find them, but the UI will let you know. It’s subtle, though.

Each cartridge says how many games are in the collection on the front, so if both have 10, the UI might say 21. Then you might have to check the back of the box to find which game that’s now in your list isn’t officially mentioned on either cartridge’s box. Thanks to the VS’s WiFi connection, this is theoretically something that can be expanded over time, too. A nice, fun touch nonetheless — especially for collectors.

One minor nitpick might be the controller: Your mileage may vary due to different physiology, but it isn’t my favorite. The general design is fine and comfortable, but it doesn’t feel quite as ergonomic as the handheld or other controllers to me. Also the in-game menu button doubles as the pause button, which can be a little confusing if, like me, you find yourself reaching for Start.

On the plus side, there are now four shoulder buttons instead of the handheld’s two and the cables are plenty long enough to reach across most living rooms. You can, of course, use the handheld as an extra controller, but it needs a specific cable — I tried the USB cable that came in the box and, no dice. That cable is about $10, while an additional controller is about $20, so it’s worth weighing up the benefit before deciding which way to go. The VS also supports basically any standard USB controller, so if you have one lying around that you like, you can use that at the expense of retro authenticity.

All in all, the Evercade VS is a pleasant surprise. The cartridge-based model will always be appealing to some and a deterrent to others. But for those who love rarities and a good dollop of nostalgia, the Evercade ecosystem is shaping up to be more than just a gimmick. With the recent wave of new indie games also making it to the platform it could find itself being a vibrant platform for new games, too. One where indie developers can not only enjoy seeing their games have a physical release, but find new audiences, and that’s never a bad thing.

All products recommended by Engadget are selected by our editorial team, independent of our parent company. Some of our stories include affiliate links. If you buy something through one of these links, we may earn an affiliate commission. All prices are correct at the time of publishing.
View All Comments
The Evercade VS captures the spirit of retro gaming