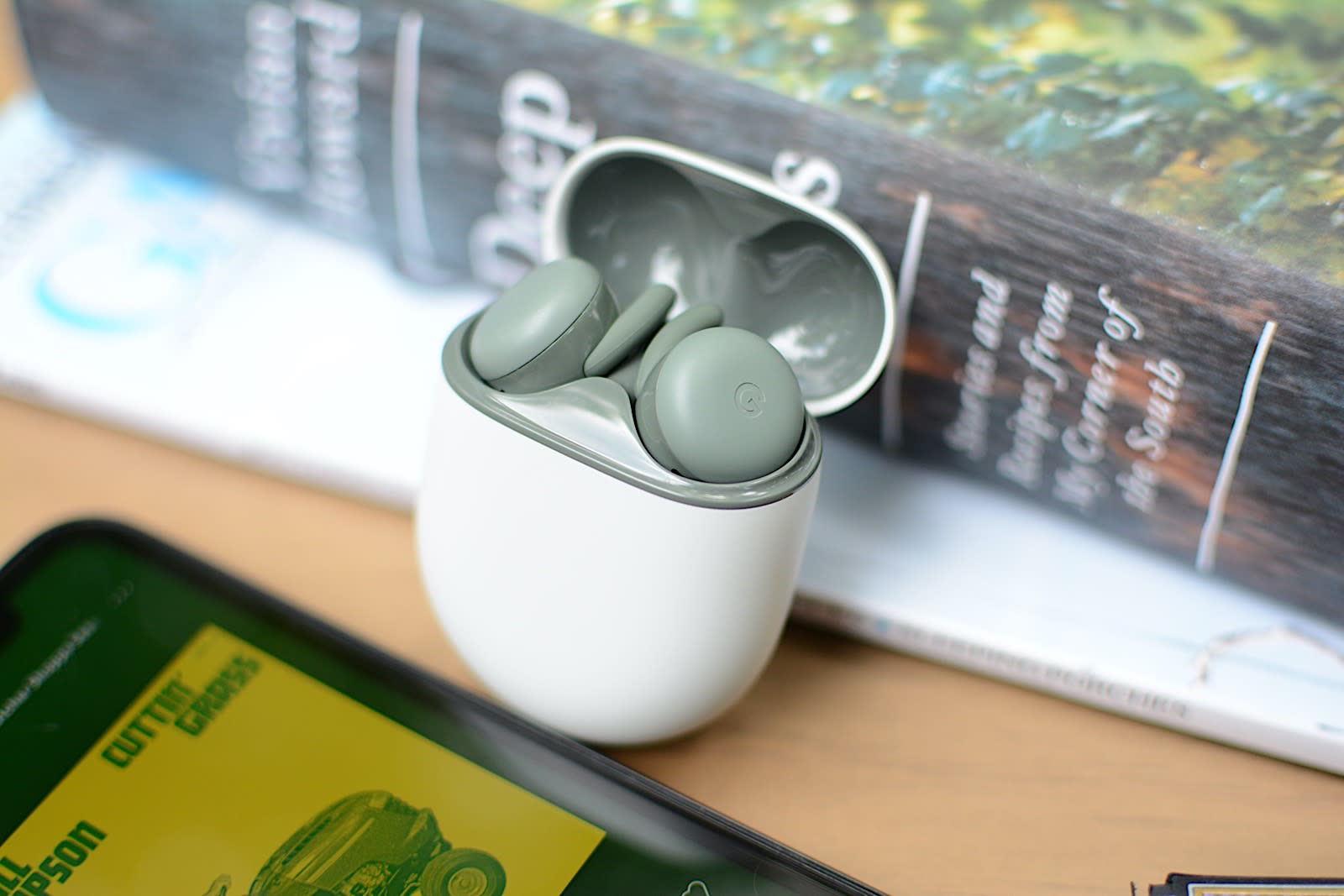 After months of rumors and brief appearances, Google has officially revealed the Pixel Buds A-Series. True to the early hints, they’re mostly the same in terms of both design and features as last year’s true wireless Pixel Buds. There are a few key differences, but the main one is that the A-Series is only $99. For that price, I’d argue there are some features you can probably live without.

The Pixel Buds A-Series have the same design as the Pixel Buds from 2020. Except for the new Dark Olive color option and the white version being two-tone with gray instead of black, you’d have a difficult time telling them apart. The subtle differences are the shape of the microphone openings and the A-Series has two charging contact points instead of three. The earbuds still have the “stabilizer arc” off the back that helps secure them in your ear. They’re still small and round so they tuck in nicely without extending from your head like a set of antennae. Spatial vents also return, which help keep things comfy by relieving the feeling of having your ears plugged. And lastly, the A-Series is IPX4 rated for worry-free workouts.

The outside of each earbud is still where you access the on-board controls. Each action is mirrored on both sides with play/pause and answer call (both a single press) alongside skipping tracks (double press and triple press) as the main actions. A long press will summon Google Assistant, but the swipe volume adjustment from the Pixel Buds is gone. In fact, there’s no on-board volume control on the A-Series. Google recommends you use Assistant instead, which can be done hands-free but is still slower than just running your finger up the side. The A-Series still features in-ear detection, which means the audio will automatically pause when you remove an earbud.

While the charging case is the exact same size and shape, there are some differences there too. First, the combined weight of the A-Series earbuds and case is nearly 14 grams lighter than the previous model. On last year’s Pixel Buds, there were two LED status indicators — one at the bottom of the front and one on the inside with the buds. The interior light was axed and the one on the outside has been moved up near the case opening. As before, a Bluetooth pairing button sits around back and the USB-C port is on the bottom edge. Thankfully, Google’s Fast Pair returns, connecting to your Android phone in a flash when you open the lid. It’s even remarkably quick when you have to employ the pairing button for a non-Pixel device for the first time. The days of swiping to the Bluetooth menu are behind you with these earbuds.

Much like the other two Pixel Buds devices, the main allure of the A-Series is the deep integration with Google Assistant. And despite the lower price, Google didn’t cut corners on the features here. You still get hands-free access to Assistant just by saying “Hey Google” or “OK Google” when you need it. The Pixel Buds app will allow you to disable this if you prefer the long button press, but not having to reach for your ear when your hands are full is always nice.

Google Translate is also available on the A-Series. Like before, the Conversation Mode feature does a decent job translating both sides, but slight delays can make chatting a bit awkward at times. And of course, you’re at the mercy of Translate’s abilities, which aren’t flawless. Still, the feature is just as handy on the A-Series as it was on last year’s Pixel Buds and could be a huge help when international travel resumes. It’s not “real-time” in most scenarios, but it’s close enough to be useful.

Google Assistant is also skilled at notifications on the Pixel Buds A-Series. As was the case last year, you can have the virtual helper provide info on texts, emails, calendar events, traffic and flight status. If you need to hear a full message, you can access it right on the earbuds by long pressing. Assistant can also be used for all the things you need on a regular basis, from controlling music to the weather forecast and directions to the nearest burger spot.

Two features that didn’t make it from the Pixel Buds to the A-Series are Attention Alerts and Share Mode. The first is an experimental feature that lowers the volume and plays a chime when the earbuds detect a supported sound — things like a baby crying, a dog barking and emergency vehicles. Google says this is because the A-Series doesn’t have the same on-device sensors as the 2020 model. Secondly, Share Mode allows you to... well, share an earbud with someone else, but gives you both individual volume controls. The company explains that this is missing due to the lack of an accelerometer or gyroscope.

Last year’s Pixel Buds sounded pretty good out of the box, but with some genres, there was a noticeable bass deficiency. With the A-Series, the sound profile is mostly the same: a well-balanced mix of high, mids and lows across styles with good clarity in the details and depth that keeps things from sounding compressed. To address the lack of bassy thump on the previous model, Google added a bass boost option in the Pixel Buds app to increase the low-end tone. It definitely helps, but it’s an all or nothing setting. There are still no options for sound presets or manual EQ tuning. Thankfully, bass boost gives hip-hop tracks like Bun B’s “This World” and metal selections like Gojira’s “Born for One Thing” the driving deep tone that was absent before.

Adaptive Sound returns on the A-Series which compensates for changes in environmental noise by automatically adjusting the volume. As was the case last year, the temporary changes are subtle and I’d prefer the volume fluctuations to be more noticeable in order to truly help combat louder noise around me. I can appreciate Google doesn’t want to damage my hearing by suddenly jacking up the volume, but a slightly more dramatic adjustment would help. And to be clear, it’s no replacement for true active noise cancellation (ANC).

With the Pixel Buds in 2020, a lot of users encountered issues with Bluetooth that led to frequent dropouts and poor audio quality. An FCC filing in March indicated that Google was making some tweaks to the wireless connectivity and the company confirmed to Engadget that it increased transmission power. Google says both of the A-Series earbuds connect to the source device instead of just one that then sends a signal to the other. The company explained it should reduce latency in addition to improving connectivity. In my experience so far, the changes seem to be doing their job as I didn’t experience any of the dropouts that plagued the previous release.

Like almost every set of true wireless earbuds these days, Google is promising good call quality thanks to the A-Series’ beamforming microphones. As many others do, the company says this will “focus on your voice and reduce outside noise” — and it delivers. Most earbuds make you sound like you’re on speaker phone and don’t actually do much to combat any sound around you. The A-Series won’t make you sound pristine, but they do reduce background noise so that your voice comes through more clearly.

Another thing Google didn’t change on the A-Series is battery life. Just like the Pixel Buds, the company says you can expect up to five hours of listening time and two and a half hours of talk before you’ll need to dock these in the case. When you factor in that accessory, the total listening time is 24 hours. Unlike the 2020 model, I managed to nearly meet the stated figure, only falling short by about 15 minutes. Interestingly, the Pixel Buds app showed 0 percent a few minutes before the earbuds actually died. The quick charge tool is different though, offering three hours of listening in 15 minutes instead of two hours in 10 minutes like before.

In regards to battery life, one big change from the Pixel Buds to the A-Series is the lack of wireless charging. This more affordable model no longer supports Qi-certified accessories. Instead, you’ll need to reach for a USB-C cable when the earbuds and case are completely drained. Depending on your priorities, this could be a deal breaker or a no-brainer for saving $80.

With two Pixel Buds models, Google is filling out its true wireless lineup to match those of Apple and Samsung. The A-Series for Google is what the “regular” AirPods are for Apple. And like Google, Apple offers options with and without a wireless charging case. Both AirPods options offer hands-free access to Siri and quick pairing via the H1 chip. They also both have the same battery life as the Pixel Buds and A-Series. Apple’s standard earbuds are more expensive though, at $159 and $199. Like the Pixel Buds and Google’s hardware, you get the most out of AirPods when they’re paired with an Apple device.

Samsung is a more apt comparison here. The company has a full line of true wireless earbuds, including the Galaxy Buds+, Galaxy Buds Pro and Galaxy Buds Live. At around $100 (originally $150), the Galaxy Buds+ are the most direct competition with the Pixel Buds A-Series. There’s no deep integration with Google Assistant, though there are some Bixby-friendly features. However, Samsung opted for smaller earbuds with solid sound quality, decent customization and double the battery life at 11 hours.

On the Pixel Buds A-Series, Google managed to offer a feature-packed set of earbuds for $80 less than its previous model. And the company did so without cutting too many corners or leaving off a lot of attractive items. At $99, the A-Series jumps near the top of the list of best options in this price range for the tight integration with Google Assistant, comfy fit and sound quality. You might miss wireless charging, but the other features the company left out from the 2020 version are easily forgotten when you’re saving this much.

As part of today’s announcement, the Pixel Buds A-Series are now available for pre-order in the US and Canada at Google's website and retailers like Best Buy, B&H Photo and others. Google says early adopters can expect them to arrive by June 17th.