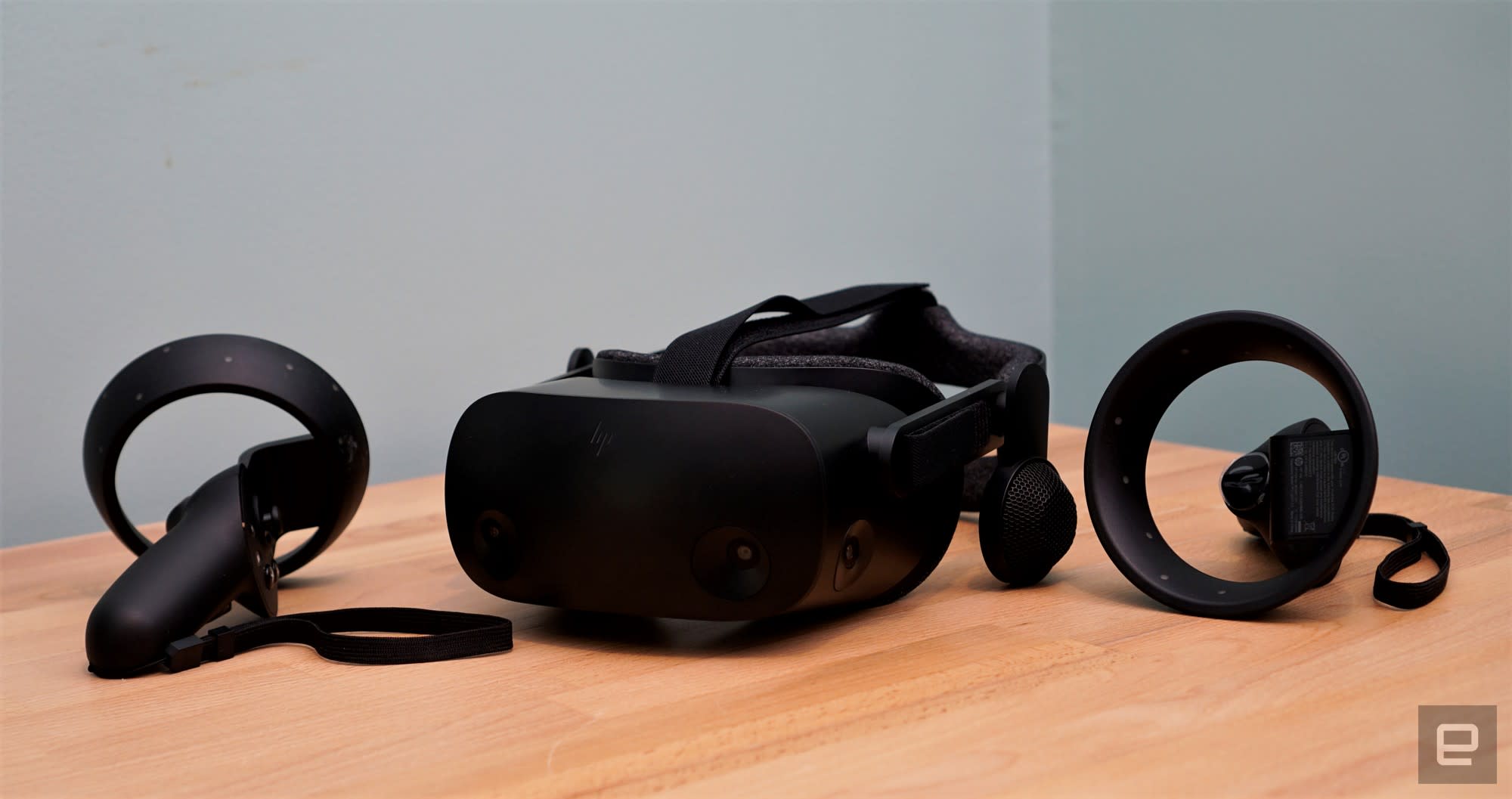 It’s the best Windows Mixed Reality headset yet, but it faces stiff competition.

Does the world need another PC VR headset? Oculus seems to be giving up on that market and focusing entirely on the Quest 2, a $299 standalone device that can still provide a decent high-end VR experience when connected to a computer. Valve's Index was the last truly exciting desktop VR entry when it launched last year, but it's too expensive for most at $999. So, as I began testing the Reverb G2 ($600), HP's latest Windows Mixed Reality (WMR) headset, I couldn't help but think to myself, "Who wants this?"

The answer, it turns out, is a bit complicated. The Reverb G2 offers higher-quality VR than the Quest 2 and $399 Rift S, but it's significantly more expensive than either headset. Still, it could be compelling for gear heads who can't quite justify the Index's high cost. In fact, Valve helped HP design the Reverb G2, which allowed HP to bring over some of the Index's most compelling features for almost half the price.

Front and center on the G2 are Valve's unique near-field speakers, which produce high-quality sound near your ears without the discomfort of wearing headphones. It also has lenses shaped similarly to the Index, with a sharp 2,160 by 2,160 resolution per eye, a 90Hz refresh rate (like the first Reverb), and a 114-degree field of view. Notably, HP's headset packs in even more pixels than the Index's dual 1,440 by 1,600 lenses. (That said, Valve's device also supports up to a 144Hz refresh rate and has a larger 130-degree field of view.)

Another major upgrade: The Reverb G2 is the first Windows Mixed Reality headset with four tracking sensors. Previous WMR devices only had two, which made it difficult for them to know where your controllers were at all times. That's the last thing you want, as tracking issues can easily break the illusion of VR, especially in fast-paced games or experiences where your hands are all over the place. By increasing its sensor count, HP can now keep up with the Quest 2 and Rift S, which have four and five sensors, respectively.

Convenience was always at the forefront of Microsoft's VR platform — its headsets only need one USB 3.0 cable and an HDMI connection to work. That's much easier than setting up SteamVR lighthouse sensors on your walls for the Vive and Index, or positioning table-top sensors for the original Rift. Having built-in sensors, a setup known as "inside out" tracking, also means you can easily travel with your headset. But as annoying as it is to set up external sensors, they're always more accurate. That's something I genuinely appreciated while playing Half-Life: Alyx on the Index, a game that involves lots of complex controller movement.

The Reverb G2 looks more polished than any other Windows Mixed Reality headset we've seen. Sure, it may seem like just another VR helmet, but dig a bit deeper and you'll see how HP has refined its design. Its smooth plastic case feels stronger than the odd cloth front panel from the last Reverb. The G2's headband is also sturdier and there's more cushioning around the lenses, making for a more secure and comfortable fit. And it's nice to see the Index's near-field speakers in a cheaper headset, even if the housing feels less premium. From the G2's striking profile alone, with its clean lines and a symmetrical arc around the headband, you can tell HP had some serious design help from Valve this time around.

As great as the headset's hardware is, though, HP didn't put as much design energy into the G2's controllers. Sure, they're better than the stock controllers that the original Reverb and most other WMR headsets include, but not by much. The handles are curved slightly to fit your hands more ergonomically, which is a far cry better than the awkward straight handles from Microsoft's original design. But the controllers still feel a bit hollow, the gamepad buttons aren't very responsive, and the analog stick seems cheap. They're a step down from Oculus's excellent motion tracking controllers in almost every way.

There are ways to get alternative gamepads working with the Reverb G2, including Valve’s excellent finger-tracking controllers. But that involves spending a lot more since you have to buy SteamVR lighthouse sensors and the Index controllers. Plus, you’ll have to configure them with complex software. The total cost for a G2 setup like that would easily run north of $1,100. At that point, you're better off just buying the Index outright, even if it doesn't quite match the G2's resolution.

I expected the Reverb G2 to deliver a great VR experience based on specs alone, and it didn't disappoint. But let's start from the beginning. Setting up the G2 is relatively simple, plug it into a USB 3.0 port and find a spare DisplayPort connection (there's also a DisplayPort to miniDP adapter in the box). Once it's connected, the Windows Mixed Reality utility steps you through the installation process, which involves downloading additional software and pairing the controllers.

The headset feels well-balanced ergonomically, and I didn't have any trouble fitting it over my large-framed glasses. My one issue is the cable, which sits underneath the top left corner of the headset. It's meant to weave through an opening in the face cushion and trail down your back, but that just felt awkward. I was always aware of the cable's slight tug on my head, and it's fairly easy to get tripped up since it's six meters long.

As usual, the first game I tested out was Superhot on Steam, which remains one of my favorite VR titles. It looked incredibly sharp and smooth on the G2, thanks to its high resolution display. Superhot isn't graphically intensive, but its simplistic and high-contrast art style makes it easy to see the benefits of a better display. There's none of the screen door effect you get from lower resolution headsets, which makes it appear as if you're viewing VR experiences through fine mesh.

I was instantly impressed by the Reverb G2's speakers too. They delivered crisp, robust audio that made it seem as if the Superhot baddies were right in the room with me. It may sound paradoxical, but having speakers near your ears does a better job of immersing you in VR than headphones. It's something I also noticed on the Index: The mere act of wearing headphones separates you a bit from the world, whereas sound coming from speakers near your ears can feel practically indistinguishable from reality.

I spent most of my time with the G2 testing out Microsoft Flight Simulator's new VR mode, which ended up being the perfect way to experience the headset's capabilities. We already knew it was a gorgeous game, but playing on the G2 in VR felt transformative. I could almost reach out and touch the lovingly recreated control panels, and flying around Flight Simulator's near-photorealistic rendition of Earth made me miss traveling that much more. The Reverb G2 made Flight Simulator feel so immersive that the game ended up invading my dreams, which may just be the highest praise I can give any VR experience.

Ironically enough, Flight Simulator’s lack of VR controller support was a blessing in this case, since I didn’t have to interact much with the G2’s gamepads. Instead, I played with my Xbox One X controller as always. The Reverb G2’s pads were fine for playing a slow game like Superhot, but they were uncomfortable to use for faster-paced titles like Space Pirate Trainer. And they couldn't hold a candle to Valve's finger tracking controllers while playing Half-Life: Alyx. Sure, the game looked great on the G2, but I missed the haptic sensation of grabbing and throwing objects that I got with the Index controllers. (Alyx also made me truly appreciate having controllers tightly bound to my hands, so I didn't have to worry about dropping them. That's not something you can get with the G2, or any other VR controller.)

After spending a few weeks with the Reverb G2, its place in the VR landscape starts to make more sense. I still think it's too expensive at $599, but at least it's cheaper than HTC's $699 Vive Cosmos, a decent headset that was a bit too late to the game. The G2 would be more competitive around $500, so it can easily go against the $399 Rift S and the Oculus Quest 2, which starts at $299 with 64GB of storage ($399 with 256GB). The vast majority of would-be VR consumers would be better served with the Quest 2, since they can enjoy stripped down experiences wirelessly and plug it into their computers when they want. Valve's Index, meanwhile, remains the best overall PC VR experience, especially for titles that can utilize its finger-tracking controllers.

My advice: If you want something a bit better than the Quest 2, wait until the G2 starts to fall in price. By then, the Vive Cosmos may be cheaper as well, which can better integrate with Valve's next-generation controllers. For all of its faults, the Reverb G2 is still the best Windows Mixed Reality headset yet. It proves that Microsoft's VR platform isn't dead, but the G2 is another reminder of just how far behind WMR is compared to Oculus and SteamVR headsets.

All products recommended by Engadget are selected by our editorial team, independent of our parent company. Some of our stories include affiliate links. If you buy something through one of these links, we may earn an affiliate commission. All prices are correct at the time of publishing.
View All Comments
HP Reverb G2 review: A great VR headset with middling controllers