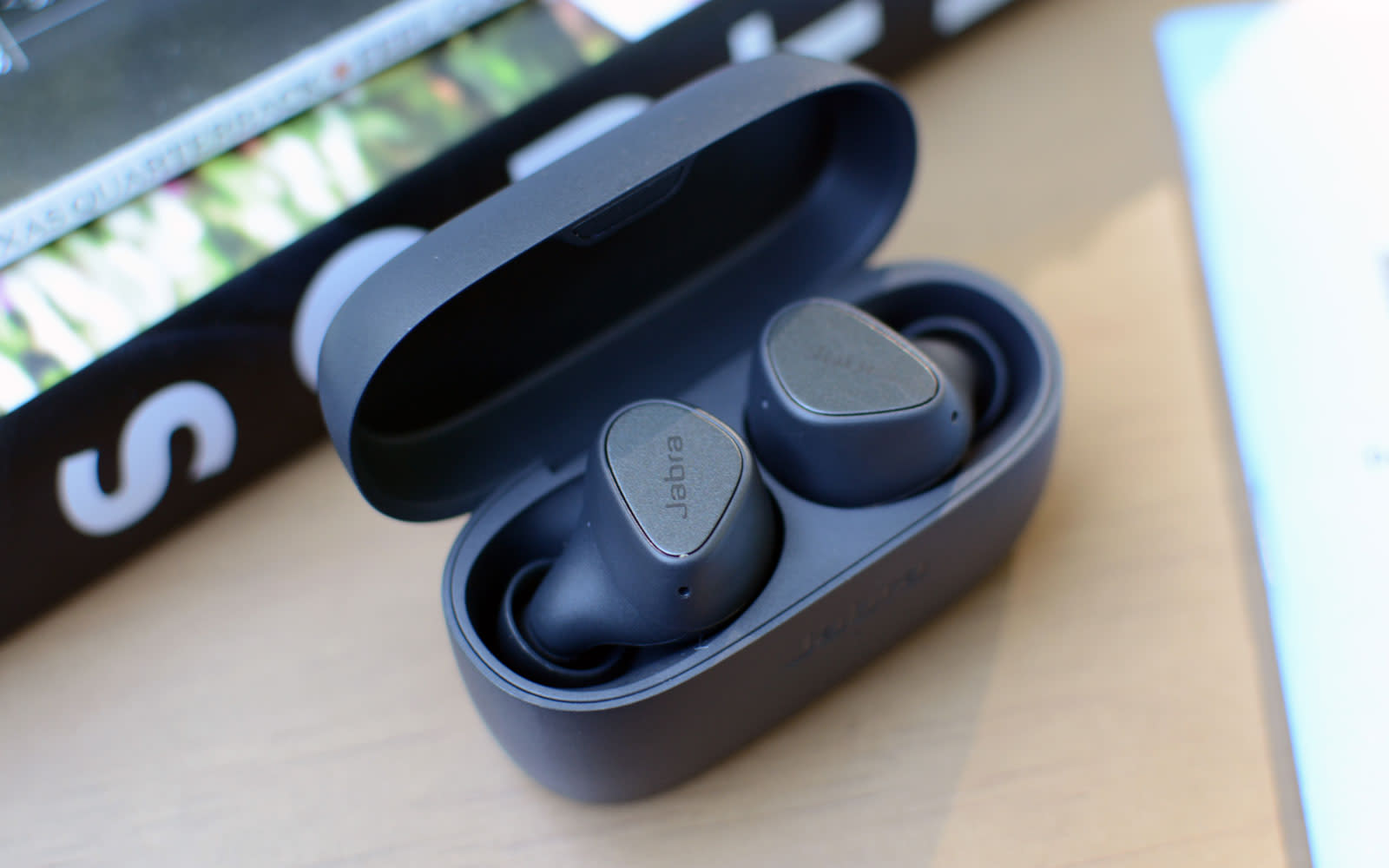 Good enough to rival competitors that cost twice as much.

Jabra has built quite a reputation for true wireless earbuds. Over the last few years, the company has continued to refine its mix of features and functionality, consistently creating some of the most reliable buds that do nearly everything well. The one item still left on the agenda was a low-cost model: a set of earbuds that gave users good sound, handy tools and solid battery life for under $100. With the Elite 3, the company does just that, and in the process it designed arguably its best true wireless product yet.

With its three new Elite models, Jabra introduced an all-new design and made all of them smaller than its previous offerings. Until now, the Elite 75t was the company’s smallest set of earbuds. But the even more compact Elite 3 makes them more comfortable than the Elite 75t and the new shape, which Jabra is also using on the Elite 7 Pro and Elite 7 Active, better mimics the curves of your ear. Jabra says it used over 62,000 ear scans to create the shape by mapping the details of the average human ear. Instead of being more circular, the Elite 3 and its pricier siblings have a rounded triangular shell.

Turn on browser notifications to receive breaking news alerts from Engadget
You can disable notifications at any time in your settings menu.
Not now
Jabra

Previous Jabra earbud models, up through the Elite 85t, all had a circle button for the on-board controls. A small triangular elbow that pointed down towards your face housed microphones. With the Elite 3, the button is a triangle now and covers the entire outer surface. All of the microphones are around the edge — one close to your face and the other up top. The inside of the earbuds are still the nozzle-like design Jabra has used in the past. So like a lot of the competition, there’s a good portion of each bud resting in your ear canal.

Like previous Jabra models, the on-board controls are physical buttons as opposed to touch panels. This means you actually have to press them, but it also means they’re more reliable. On the right side, you can play/pause (single press), skip tracks forward (double press), skip tracks backwards (triple press) and turn the volume up (press and hold). On the left, the same actions cover turning ambient sound on/off (single), activating your voice assistant (double) and volume down (press and hold). There’s nothing assigned to the triple press on the left earbud. Android users can also opt for quick access to Spotify, but you’ll have to replace the ability to summon your assistant.

Everything that’s available as an on-board control is right on the buds already, so you don’t need to pick up your phone for the basics. And that means that during workouts, for which the Elite 3’s dust and water resistance is well-suited (IP55), you can quickly press a button and get right back to your exercise. The one key thing that is missing here is automatic pausing. It’s annoying, but lots of earbuds in this price range omit that feature so I wouldn’t consider it a dealbreaker.

The included charging case is almost identical to the one that came with the Elite 75t. It too is quite compact, easily tucking into a small pocket for transport. The Elite 3 case is noticeably lighter though and the materials used to make it feel a bit cheap. The lid in particular is a bit flimsy. Of course, if the case protects your earbuds and consistently keeps them charged, I’m willing to bet there won’t be many complaints.

When it comes to audio quality with sub-$100 earbuds, you typically get muted, muffled sound that lacks any kind of depth or bassy thump. Anker’s Soundcore line is an exception to this, and now you can add Jabra to that list as well. I was immediately impressed with the Elite 3’s sound quality. The tuning is well-balanced, but the low-end tone booms when it's needed. The kick drum is deep and dynamic across rock tracks, and beats are energetic with hip-hop and electronic styles. Songs that were recorded to sound open and airy, like CHVRCHES’s “How Not To Drown” or John Mayer’s “Last Train Home,” are just that. Even the best-tuned cheap earbuds can have sound that feels compressed, and that’s far from the case on the Elite 3.

Jabra’s sound profile here is also adept at highlighting details. On the aforementioned CHVRCHES track, you can easily hear finer touches like the rattle of the snare drum. Little things like string noise and gritty guitar distortion throughout Chris Stapelton’s Starting Over add another dimension to the album. Even though Jabra only gives you a few presets to adjust the EQ with, it doesn’t matter: the Elite 3 outshines pricier competition with sound quality thanks to a mix of balanced tuning, punchy bass, great clarity and inviting depth.

The Elite 3 is equipped with ambient sound, or HearThrough as Jabra calls it, but the audio quality here isn’t as good as some more expensive sets. Don’t get me wrong, it does its job piping in the noises around you when you activate it. Things are muffled though, and the earbuds only pick up your voice when you’re on a call (sidetone). So for all the times you might want transparency, you still feel shouty when you’re having a quick chat IRL.

Like a lot of headphones companies, Jabra promises “crystal-clear calls” with the Elite 3. And like much of the competition, that claim doesn’t pan out. These earbuds are perfectly serviceable for phone and video calls, but they’re far from “crystal clear.” You end up sounding like you’re on speakerphone, and there’s a dull roar in the background at all times. Does it get the job done? Yes. Do you sound great? No. Jabra does make up for its shortcomings with a few handy features, though.

First, the Elite 3 automatically switches to HearThrough mode on calls and you can enable sidetone to pipe in even more of your voice so you don’t feel the need to yell. There’s also a handy mute control on the earbuds, disabling the mics with a single press on either side. Lastly, Jabra has enabled a mono mode on this set, so you can use a single earbud at all times, even while the other is charging.

The Elite 3 works with Jabra’s Sound+ app that supports a lot of its earbuds, headphones and headsets, but the options this time around are very limited. On the main screen, there’s the usual battery level percentage up top, a HearThrough (ambient sound) control and a collection of six audio presets. Unlike other Jabra models, there’s no manual EQ and obviously no noise cancellation control. HearThrough mode is also all or nothing, there’s no slider like there is for some of the company’s other earbuds.

If you dive further into the settings, the Elite 3 is compatible with Find My Jabra if you misplace an earbud and you can also activate sidetone during calls so you can monitor your own volume. When you’re on a call sidetone control will appear on the main screen for quick access. The on-board controls, however, are set and you can’t reconfigure them. Thankfully, Jabra covers the basics there, so you don’t really need to change anything. As I mentioned, you get a few additional options for the on-board controls with Android, but that’s the only difference from the iOS app. On Android devices, the Elite 3 also supports Google Fast Pair, which makes connecting to your phone a breeze.

Jabra promises up to seven hours of battery life on the earbuds themselves with an additional three charges in the case. This is slightly better than a lot of the competition these days, where many of those options hover around the five-hour mark. The case isn’t equipped with wireless charging, but there is a fast-charge feature that gives you an hour of use in 10 minutes. During my tests, one of the Elite 3 buds died 15 minutes short of seven hours, while the other lasted 20 minutes past the stated time limit. If you’re docking these in the case a couple times, you should have no trouble getting a full workday and then some.

At $80, Jabra has undercut much of the big-name true wireless competition. The cheapest AirPods are $159, Samsung’s Galaxy Buds 2 will cost you $150 and Sony’s WF-XB700 is $130. Unless, of course, you can find any of those on sale. At full price though, affordable options from what I’d consider “the big three” are all more expensive than Jabra.

A worthy alternative to the Elite 3 is Anker’s Soundcore Spirit Dot 2. They’re the same price as Jabra’s latest in a tiny, comfy form factor with punchy bass, on-board controls and an IPX7 rating. The Spirit Dot 2 offers five and half hours of battery life, though I only managed about four and a half during my review. There’s also no on-board volume controls, which could be a dealbreaker for some. The good news is Anker has a literal ton of other affordable true wireless options, including the newer noise-cancelling Liberty Air 2 Pro with a more AirPod-like design.

After covering the audio beat for years, it’s rare that I’m surprised by a set of earbuds. I typically have a good idea of what to expect before buds are in-hand and spec sheets rarely undersell products like these. With the Elite 3, I can honestly say Jabra exceeded my expectations. These are an incredible value for the price, mostly due to sound quality that is better than some of the competition that costs twice as much and an all-new design that’s both tiny and comfy.