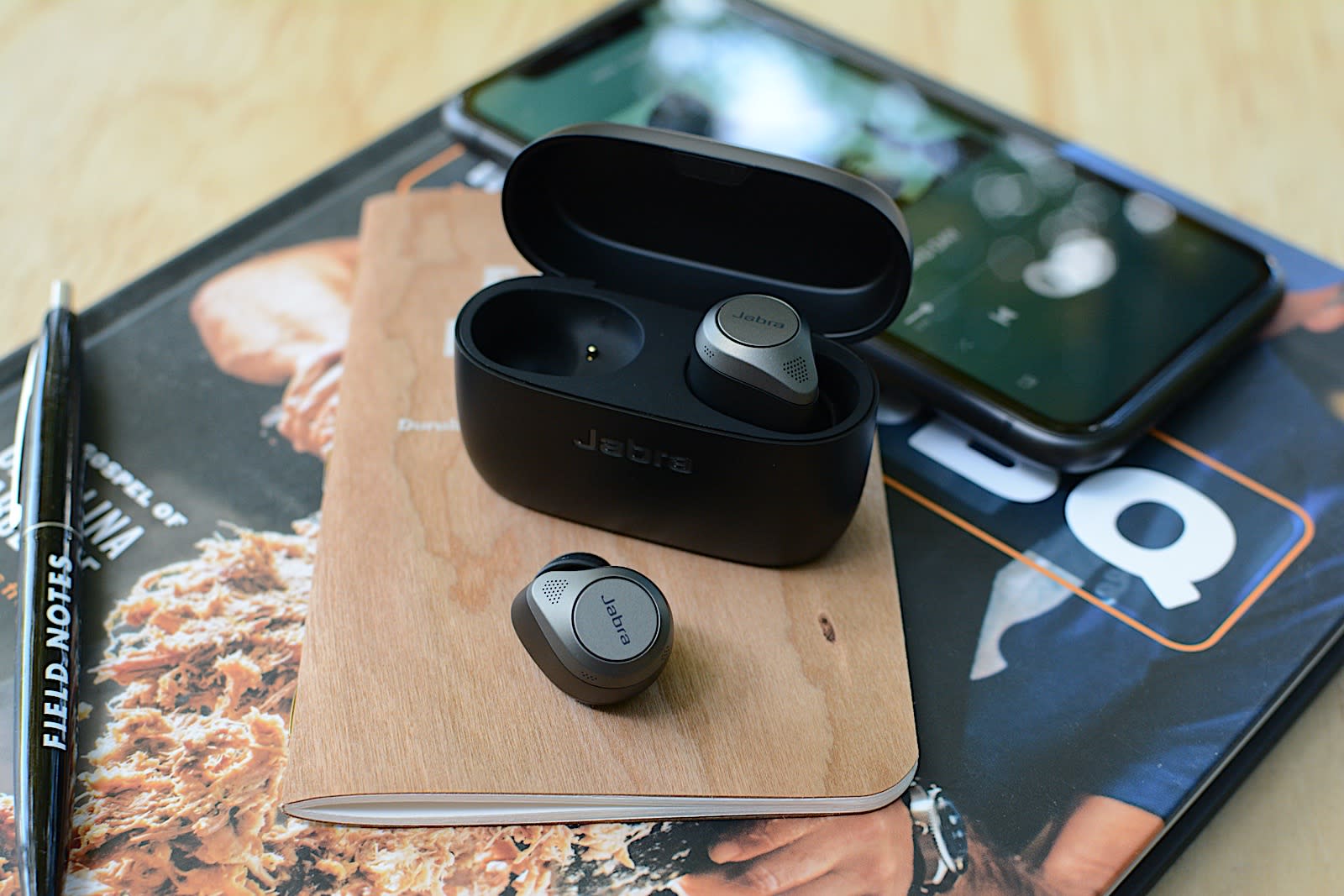 Jabra proved its true wireless mettle with the Elite 65t earbuds in 2018. The company, better known for headsets than headphones, had a worthy contender with its debut model. It returned in 2019 with the vastly improved Elite 75t, and once again earned high marks. But one key feature was missing: active noise cancellation (ANC). Jabra is filling the void now with the Elite 85t ($230), a set of wireless earbuds that takes the best parts of the previous model and goes even further. Now that Jabra has a true flagship option, it has enough to compete with the best.

With the Elite 75t last year, the company totally redesigned its true wireless earbuds. They were significantly smaller, lighter and all-around sleeker than the Elite 65t. The Elite 85t are nearly identical outside, except the holes for the microphones are smaller on the 85t. The company did add some depth to accommodate the noise-cancelling components and bigger speakers, but even then, the 85t is only slightly larger than the 75t. Of course, this means the latest model sticks out of your ear a little further, but the shape is the same and, at least in terms of how they sit in your ear, the Elite 85t still offers a very comfortable fit.

Turn on browser notifications to receive breaking news alerts from Engadget
You can disable notifications at any time in your settings menu.
Not now
Jabra

Like the Elite 75t, Jabra opted for physical buttons for the onboard controls once again. A single circular panel on each earbud accepts single, double and triple presses in addition to a press-and-hold gesture. On the right side, the default options are play/plause, voices assistant and volume up. On the left, ANC/HearThrough control, skip tracks ahead, skip tracks backwards and volume down are the tools at your disposal. It runs the full gamut, but having the track controls on the same side was a little awkward. Thankfully, the MyControls feature in Jabra’s app lets you remap all the onboard functions to suit your needs.

One final small, but very significant design change is the location of the charging indicator on the case. Previously, Jabra situated that multi-color LED around back, beside the USB-C port. Now it’s around front, where you can see it when you open and close the case, which makes a lot more sense. It was frustrating to have to turn the case around to see the light every time you docked the earbuds to charge.

Jabra developed what it calls Advanced Active Noise Cancellation where a dedicated noise-cancelling chip allows you to adjust the extent to which you want to block out your surroundings. Software-wise, the system consists of separate sliders inside the company’s Sound+ app that control the level of noise cancellation and HearThrough, or ambient sound. And, of course, you can opt to disable them both entirely for the “stock” experience. This tech is different from Jabra’s Smart Active Noise Cancellation that’s on the Elite 85h headphones. That feature automatically turns on when it senses “unwanted” noise around you based on how you configure things in the  app. What’s on the 85t is adjustable, but it’s not automatic. And honestly, that’s just fine.

The noise-cancelling setup is similar to what Bose and Sony offer on their flagship models, the QuietComfort Earbuds and WF-1000XM3. Each one gives you the ability to adjust the level of ANC in an app, and in Sony’s case, you can dial in presets for activity and even location. Jabra has “Moments” in its app, allowing you to set three sound profiles for My Moment, Commute and Focus. The key difference is the Elite 85t doesn’t automatically detect movement or location and switch your audio profile like Sony does.

When it comes to pure noise-cancelling performance though, Jabra can run with the best. The ANC on the Elite 85t isn’t quite on the same level as Bose’s QC Earbuds -- which I currently consider the noise-cancelling champ in terms of true wireless -- but it isn’t too far off. These new Jabra buds do a great job countering afternoon cartoons and the low roar of my 1st grader getting increasingly hype as he plays Mario Kart. Active noise cancellation can be a tough thing for true wireless earbuds to manage, but the Elite 85t is a workhorse.

Jabra benefits from a smaller size and design details that help ease fatigue. Specifically, the Elite 85t is what the company calls “semi-open” with pressure relief vents that reduce the feeling that you’re wearing earplugs instead of earbuds. Indeed, even though these have design elements that go into your ear canal, they do feel different than most buds. With similar models, I can typically use them for about an hour before they become a burden. That never happened with these, and I’m confident this pressure relief system is to thank for it.

The Elite 75t offers the same solid sound quality and clarity I’ve come to expect from Jabra. It’s above average, but it’s not the best. With the Elite 85t, the company has improved things a bit, starting with larger 12mm speakers -- twice the size of those on the 75t. That brings deeper bass and a slightly wider soundstage, so everything seems to have a bit more depth.

There was plenty of low-end tone throughout the mix of hip-hop, metal, country, electronic and indie rock I threw at the 85t. Though they can’t quite match the depth delivered by Sennheiser’s Momentum True Wireless 2. It can be tough for earbuds to adequately capture the intensity of albums like Run The Jewels RTJ4, but the Elite 85t does it quite well. Ditto for the atmospheric post-rock soundscapes of Caspian’s On Circles. The best true wireless options create distinct layers, with instruments stacked up rather than compressed to a flat roar. Jabra makes a valiant effort with the 85t, but it comes up short of the immersion Sennheiser established on the MTW2.

I did encounter one issue with the overall audio performance. There’s an annoying -- and honestly, down right painful -- popping noise when I remove the right earbud and the audio automatically pauses. It does it almost every time, to the point where I began reaching for the onboard pause button to avoid it. There’s another popping sound when you change from noise cancelling to ambient sound in the app. This one is less painful, but it’s still obvious and jarring. Jabra says it will address the issues in its next firmware update. These things can fixed easily by the company, but for now, they’re annoyances you don’t want to encounter in a set of $230 earbuds.

All of the customization on the Elite 85t happens in Jabra’s Sound+ app. That begins with the slider controls for ANC and ambient sound and continues to a music equalizer. The company gives you six presets if you don’t want to mess with the curves, but you have full control over the EQ as well. If you find something you like beyond those default profiles, you can save it for later use. What’s more, the MySound audio test that Jabra debuted earlier this year is available on the Elite 85t. That process optimizes your earbuds to your unique hearing characteristics via a short beep test. Once you do, the calibration is applied to the default settings, so whatever tweaks you make will be in addition to MySound. You can repeat the test at any time or disable the feature entirely and revert back to the out-of-the-box audio profile.

As I already mentioned, the Sound+ app has a MyControls feature that gives you the ability to reassign the functionality of the onboard controls. You can do so for music/media and both incoming and ongoing calls. Here, I was able to remedy the awkwardness I experienced with the track controls in a matter of seconds. Lots of headphone companies allow you to tweak things a bit, but few offer the full customization Jabra does with MyControls.

Sound+ also has a handy Soundscape or noise machine function. There are options for nature sounds and “comfort ambience” (cavern or crowd) in addition to the pink noise, white noise, fan, waterfall and driving settings. And perhaps most importantly, the app keeps you updated on battery levels for each earbud and the case individually.

Jabra promises five and a half hours of listening time with the Elite 85t on the earbuds themselves. That’s with the ANC turned on. If you decide to disable that feature, battery life increases to seven hours. During my tests, I found both figures to be nearly spot on. I actually went over with ANC on by about 10 minutes, but fell just short with it off by about the same margin. Seven hours is pretty decent these days, but five and a half is just shy of key competitors for full-featured ANC true wireless earbuds. Both Bose and Sony claim six hours on their flagship buds, and with the fromer’s QuietComfort Earbuds, I actually managed closer to seven. You can find options that will get you more listening time on a charge, but they won’t have the powerful noise cancelling this trio offers.

When you factor in the case, you can get up to 25 total hours of use out of the Elite 85t before having to charge the entire package (5.5 earbuds, 19.5 case). Like previous models, Jabra included a quick-charge feature that gives you an hour of listening time in 15 minutes. Most importantly, the company also added wireless charging to the Elite 85t case. Simply place the accessory on any Qi-certified pad and you’re good to go. When the battery is completely depleted, you should expect wireless charging to take four hours -- an hour and a half longer than actually plugging in.

Alongside the Elite 85t, Jabra also rolled out an update to the Elite 75t and Elite Active 75t that added active noise cancellation. While this does give the previous generation a substantial upgrade, the Elite 75t models don’t have a dedicated ANC chip. This means that they don’t have the fully adjustable noise cancellation or ambient sound that the Elite 85t offers. They are $70 less, which is enough of a discount to consider.

For flagship, full-featured true wireless earbuds, I still feel Sony’s WF-1000XM3 has the best combination of sound quality and noise cancellation. Add in the customization Sony offers with those buds and it’s really hard to beat. They are aging, which is really the only thing to think twice about. There hasn’t been any indication a new model is imminent, but it’s about that time. With the Bose QuietComfort Earbuds, you get the best pure ANC performance I’ve tested. The overall sound profile isn’t quite as good as the 1000XM3, the QC Earbuds are pricey and they lack some features.

With the Elite 85t, Jabra fills the one hole in its lineup. The company now has a flagship true wireless model with powerful noise cancellation that rivals the best units I’ve tested. There are arguments for the WF-1000XM3’s audio and ANC, and for the QC Earbuds’ noise-blocking abilities, but the Elite 85t holds its own. In fact, when you factor in comfort and design, Jabra might have the most complete package. Sure, you can find more refined sound and fine-tuned noise cancellation elsewhere, but the combination of features, performance and the wearing experience, the Elite 85t is at the very least on the same level. If the company can fix a few minor annoyances, it will have a true contender for the best overall spot.

All products recommended by Engadget are selected by our editorial team, independent of our parent company. Some of our stories include affiliate links. If you buy something through one of these links, we may earn an affiliate commission. All prices are correct at the time of publishing.
View All Comments
Jabra Elite 85t review: Noise-blocking comfort that rivals the best