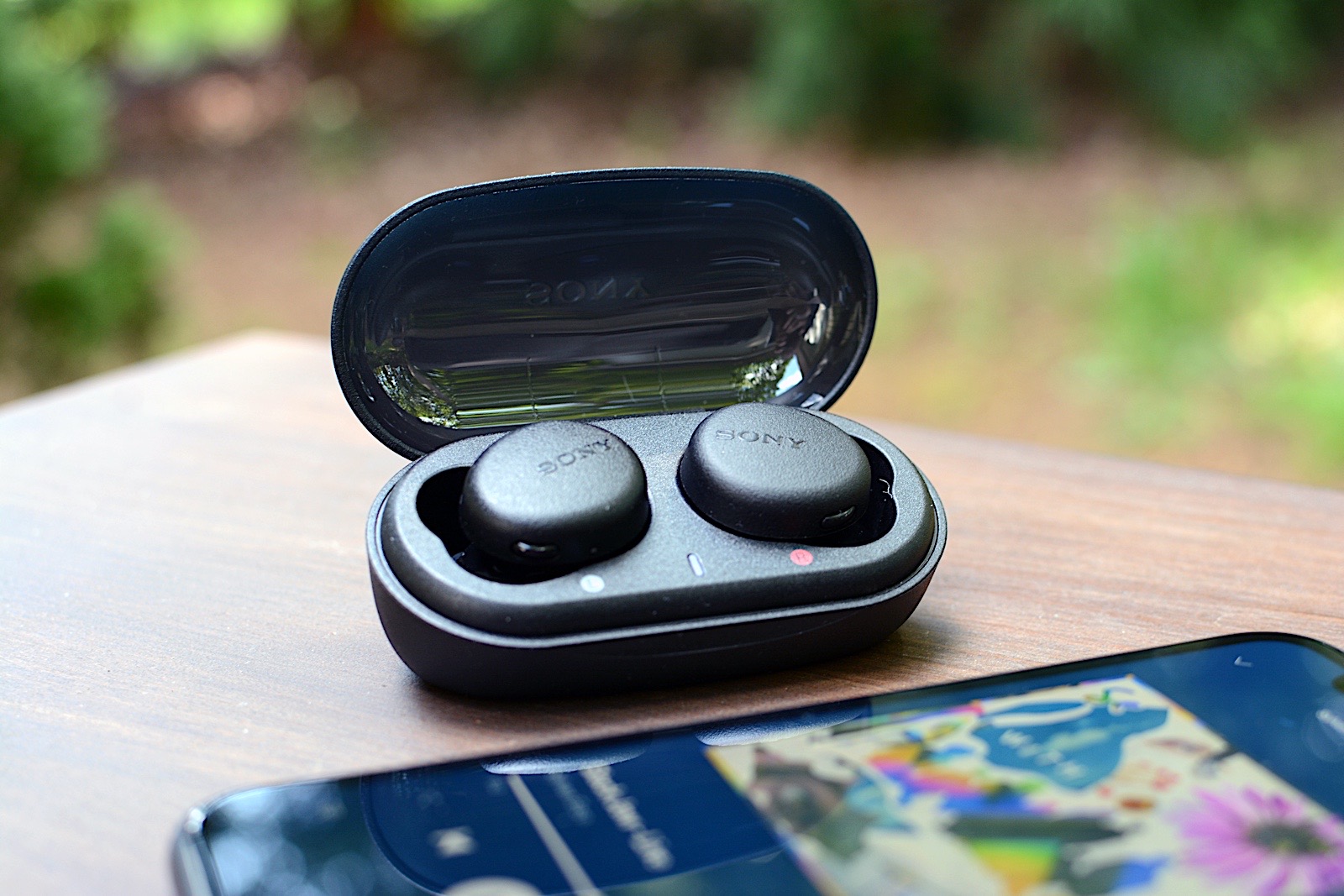 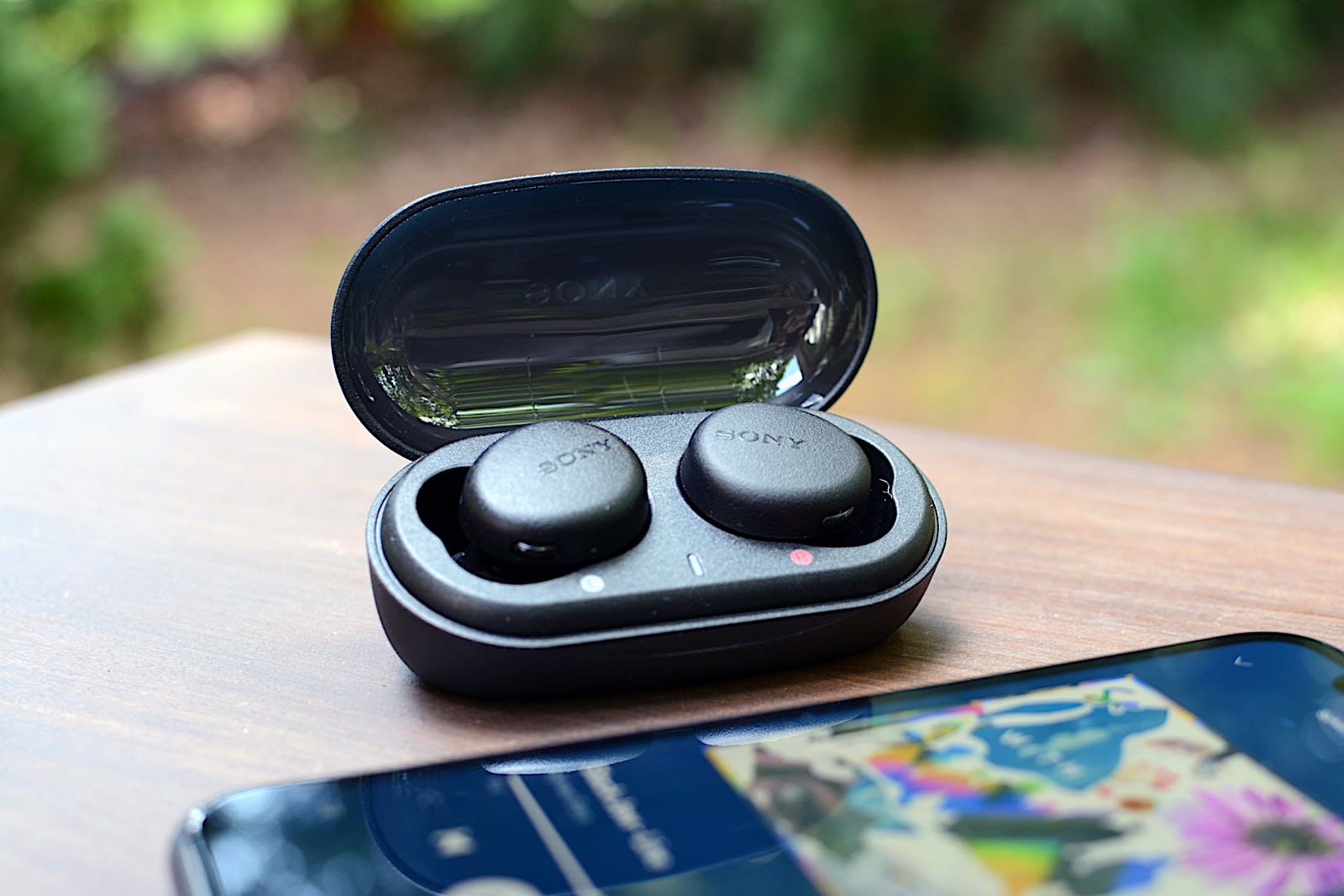 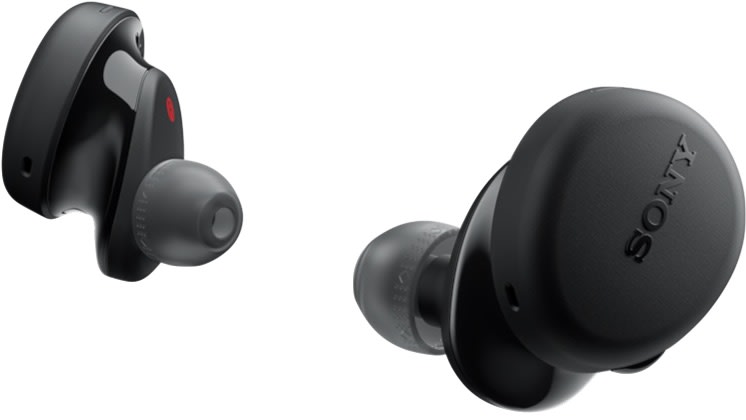 In 2020, headphone-makers can’t get by with just one option for true wireless earbuds. In order to cater to all users, they need to at least offer an affordable mid-range model and a feature-packed one that includes active noise cancellation (ANC). And if they can, a low-cost entry-level version that cuts the fewest corners possible is also an attractive proposition. Sony broke the mold with its WF-1000XM3 model last year. Those earbuds have powerful ANC, a number of customization options, touch controls and stellar sound quality -- all for a reasonable $230. Now the company has the WF-XB700: a new entry in its Extra Bass lineup that Sony promises showcases some solid thump for $130. The only question is how many features do you have to give up to save $100. 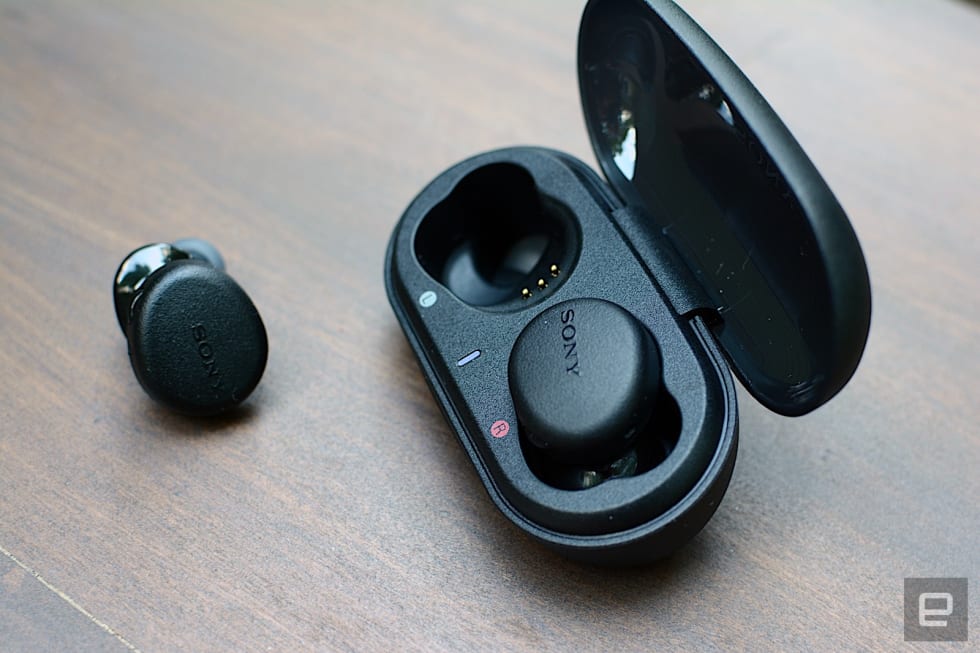 Sony’s Extra Bass line has long been a haven for listeners who want their headphones to have more low-end tone. We’re not necessarily talking early Beats levels of boom here, but there is a noticeable difference between the tuning on these and the company’s “core” lineup. Most of the Extra Bass models have been traditional headband headphones, though 2018’s WF-SP700N true wireless earbuds did carry the moniker. Since reproducing punchy bass can be a struggle in this type of earbuds, it’s nice to see Sony bring its low end expertise to field. Plus it’s doing so while keeping the price low.

Sony covers all the basics with an affordable true wireless model in its Extra Bass headphone line. While the WF-XB700 offers perks like on-board controls, good battery life and more, saving some serious cash means sacrificing the most attractive earbud features. And though the contoured design is interesting, these buds are huge and not particularly comfortable for extended listening sessions.

Be the first to review the WF-XB700?
Your ratings help us make the buyer’s guide better for everyone.
Write a review

The first thing I noticed about the WF-XB700 was its unique design. Instead of the common oval shape with a tip jutting off the bottom that goes into your ear, Sony opted for a “Tri-hold” design. The earbuds rest on your ears in three different spots, which the company says creates a more ergonomic fit and increases comfort. The more chiseled and contoured shape does indeed rest on your ear in three places, but the earbuds themselves are huge and stick out from your head quite far. This isn’t a new problem for Sony: The flagship WF-1000XM3s also look like small antennas. True wireless earbuds are trending smaller, especially the more affordable models, but Sony isn’t slimming down just yet.

Due to the larger size, the WF-XB700 aren’t as comfortable as Sony would have you believe. That Tri-hold design may live up to its name, but the shape doesn’t really make these more comfy. When it comes to earbuds, smaller and lighter is better, so when bigger buds stick out your ear like these do, it doesn’t feel that great -- especially when you try to wear them for long periods of time. Because there’s significant weight on the outside of your ear, these wiggle loose during runs or cardio workouts. Even though the WF-XB700 is IPX4 rated for water splashes, which is enough for sweat resistance, the size and weight distribution of the earbuds make them awkward for physical activity.

Instead of touch controls on the outside of the earbuds or physical ones along the top, Sony chose to put a single, tiny button on the bottom edge on both sides. Despite only having a single button, you still have a full range of controls. On the left, you press once to increase the volume and press-and-hold to turn it down. On the right, press once to play/pause, press twice to skip tracks forward and press three times to skip tracks backward. A press-and-hold on the right earbud will summon the voice assistant of your choice. And lastly that button on the right side is used to answer and end calls. The WF-XB700 doesn’t have ANC or an ambient sound mode, so these controls cover everything that’s available without reaching for your phone. They’re not only simple, but they’re also reliable. I didn’t have any trouble getting those tricky double and triple clicks to register accurately.

The pill-shaped charging case is noticeably smaller than the one that comes with the WF-1000XM3. It also doesn’t have the soft-touch coating or metallic-colored lid that gives the case for those pricier buds a more refined look. It’s simple hard plastic with a USB-C port around back. One nice thing is that the case has a flat bottom, so it stands up on your desk. What’s more, the earbuds are situated at an angle inside, so they’re easy to grab with one hand. You don’t need to hold the case with your other hand to pull out an earbud. A lot of companies overlook this seemingly minor detail, but as someone who has reviewed several dozen true wireless models, a case that sits up on its own when it’s open is a nice touch. To me, it just makes life slightly easier.

One of the best features of the higher-end WF-1000XM3 is the ability to adjust everything from noise cancellation to the EQ inside Sony’s Headphones app. This isn’t unique to Sony earbuds as several companies offer companion apps with similar functionality. Unfortunately, the WF-XB700 don’t work with the app. It’s not just that some features aren’t available either. These earbuds won’t even connect with the software. That means any customization is out the window. The WF-XB700 also doesn’t automatically pause when you take them out of your ear, which is a slightly bigger nuisance than some of the other omissions. It’s not surprising that these $130 earbuds don’t have ANC or fancier touch controls, but it would be nice to be able to apply a sound preset or tweak the EQ as needed. Or at least have them pause your music when you remove one bud to have a quick conversation.

Thankfully, the sound is respectable out of the box. As you might expect, it doesn’t have quite the range and dimensionality that the WF-1000XM3 offers, but it’s solid nonetheless. And when someone kicks a bass drum or a drum machine delivers a sonic punch, the WF-XB700 does a respectable job beaming that into your ears. The synth-laden beats of Purity Ring, Phantogram and Sylvan Esso ring full and clear. There’s not just noticeably more bass, there’s detail to it. Sustained chords drone in waves and the kick drums boom and pop with life.

Less electronic-driven styles sound great on the WF-XB700, too. Watkins Family Hour’s Brother Sister is a collection of folksy bluegrass tunes driven by acoustic guitars and fiddle. Those two instruments were seamlessly layered in with the rest of the band, rather than everything being compressed down into a uniform mess as some earbuds tend to do. It’s not as immersive as 360 Reality Audio by any means, but you definitely get a sense of space -- a small taste of what it might’ve been like to be in the room during the recording session. Not bad for $130.

With the WF-XB700, Sony promises up to nine hours of battery life on a charge. That’s three hours longer than the WF-1000XM3. I eked out eight hours and 15 minutes during the course of my testing. That’s well within the stated range considering the volume at which I typically listen to music. The only downside is that the included charging case only offers one full charge. With most of the competition, you get at least two (sometimes more) additional charges. Still, 18 hours is a decent amount of listening before you have to plug in the whole set to recharge. And if you’re in a hurry, a 10-minute charge will give you an hour of use.

When it comes to the competition, Sony has a couple alternatives of its own. Most notably, there’s the WF-1000XM3 I’ve mentioned several times already. It is more expensive, though you can regularly find a pair for around $200 if you keep an eye out. They’ve been out for nearly a year and they’re still my top all-around choice for true wireless earbuds -- mostly due to an exhaustive set of features. Sony also offers the sporty WF-SP700N for $130 (originally $180). However, those were introduced in 2018 and are past due for an update.

For non-Sony alternatives in the same price range, I like Samsung’s Galaxy Buds+ ($150) and Jabra’s Elite 75t ($180). Samsung addressed nearly every issue I had with the original Galaxy Buds on its second model, including adding a dedicated app for iOS. The Galaxy Buds+ don’t have ANC, but they do have ambient sound mode and 11 hours of battery life. Jabra improved its already good true wireless earbuds with its latest version. The Elite 75t is smaller and lighter, but still has solid sound quality and a handy app for customizing your settings. They’re more expensive, but they remain one of the best options you can find right for under $200.

Sony needed a new low-cost true wireless model in its true wireless lineup, and the WF-XB700 certainly fills the void. These earbuds live up to the Extra Bass moniker, even if the overall sound quality isn’t overly impressive. The WF-XB700 offers a full range of onboard controls that are easy to use and covers all of the basics well. While the design may not be as ergonomic or comfortable as the company suggests, these are a solid set of true wireless earbuds at this price. Just be aware that you’ll have to sacrifice some of the more attractive features to save money.

In this article: earbuds, audio, true wireless earbuds, xb700, headphones, true wireless, wf-xb700, sony, review, gear
All products recommended by Engadget are selected by our editorial team, independent of our parent company. Some of our stories include affiliate links. If you buy something through one of these links, we may earn an affiliate commission.