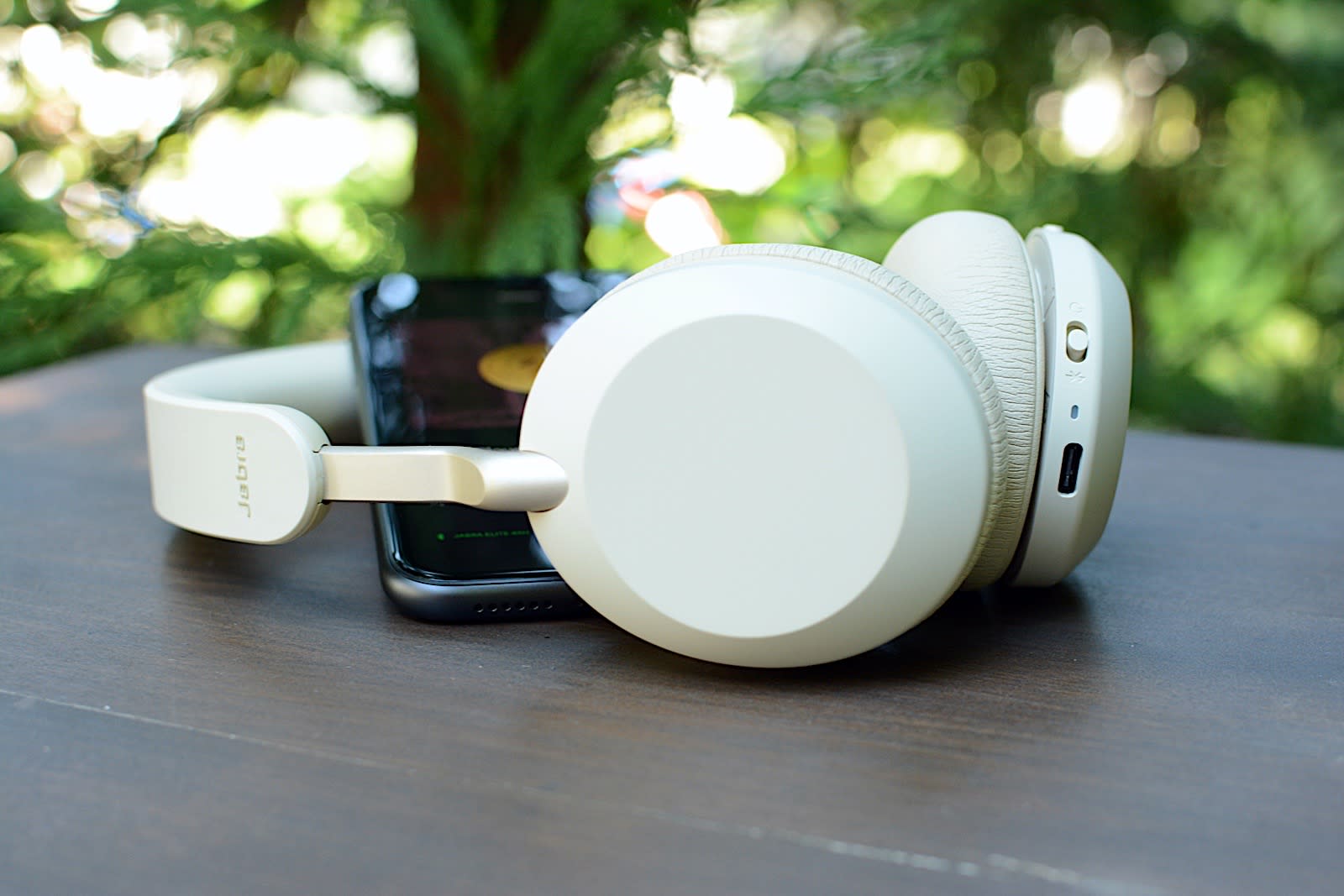 Over the last two years, Jabra has been on a solid run when it comes to audio gear. The Elite 65t true wireless earbuds put the company on our radar in 2018. It followed those up with the even more impressive Elite 75t. During that time, Jabra also debuted the noise-cancelling Elite 85h headphones with respectable ANC and solid sound quality. However, they lacked a key element to the company’s formula: an affordable price. Now Jabra is back with the $99 Elite 45h on-ear headphones, a budget option that doesn’t cut too many corners.

To start, the Elite 45h don’t look like a pair of “cheap” headphones. Typically these models have glossy plastic that tells everyone you didn’t invest very much in your audio gear. These are still mostly plastic, but the color schemes and design elements give the Elite 45h a more sophisticated look. For example, the L and R labels in the pattern of the earpad sound holes is a nice touch. And whether the overall color scheme black/silver, black/copper, navy/silver, tan/gold or all black, the entire lineup maintains the look of a pricier set of headphones.

Jabra opted for a soft cushioned headband and leather memory foam earpads to keep you comfy. Combined with the relaxed pressure on the headband itself, these are the most comfortable on-ear headphones I’ve tested. I have a huge head, so this style doesn’t usually fit me well, but the Elite 45h are a rare exception. Because these headphones don’t have ANC, Jabra didn’t need to create a seal with extra clamping pressure on your ears. The result is a much more enjoyable experience when you’re wearing these for hours at a time.

The company also included physical on-board controls, all of which are around the edge of the right earcup. They’re also in a slightly different location than what you might be used to. But after testing these for a few days, I actually prefer where the buttons sit on the Elite 45h. The power and Bluetooth pairing slider is on the bottom edge. Near the top, behind the headband hinge, a set of three buttons allow you to adjust volume, play/pause, skip tracks and answer calls. The center multi-function button handles play/pause or answer/end calls, and you can also reject calls with a double press. You’ll need that pause button often as the Elite 45h doesn't do so automatically when you take them off. On either side is the volume controls, and a press and hold on those is how you skip tracks forwards or backwards.

Lastly, on the top of the earcup in front of the hinge is a single button for activating a voice assistant. You can also use it to mute the Elite 45h’s microphones during a call. This was handy and meant I wasn’t anchored to my computer during a Zoom call. I could refill my coffee and not miss out if I needed to speak. Overall, this entire collection of buttons worked well when I needed them. Touch controls are all the rage these days, but they can be hit or miss, I much prefer the reliability of actual physical controls.

The Elite 45h works with Jabra’s Sound+ companion app. Again, this is another place where the company didn’t cut any corners. Some of the competition nixes software integration with more affordable models, but that’s not the case here.

New to the Sound+ app with the Elite 45h is the MySound hearing test. The feature is also available on the Elite 75t and Elite 75t Active earbuds, but the Elite 45h areJabra’s first regular headphones to offer it. The quick quiz asks your gender and birth year before you listen to a series of tones in each ear (varying volumes and pitches). When you hear one, you tap the screen. Once you’ve done so for both sides, the MySound tech creates an audio profile based on your responses. That becomes the default tuning for the Elite 45h, but you can turn it off or retake the test at any time.

You can also apply further EQ tweaks or employ a collection of audio presets typically found inside the Sound+ app. Because you can connect multiple devices at the same time, you can apply your changes from the app on your phone while listening to music on your laptop. That dual connection also makes taking calls a breeze. The software also offers a noise machine feature with everything from white noise to ocean waves -- in case you need to relax. And if you misplace the Elite 45h, a Find My Jabra tool will help you locate it (if you grant the app location access).

There are a few things the Sound+ app offers on other Jabra devices that aren’t available on the Elite 45h. The first is HearThrough or ambient sound mode. It might not be a deal breaker, but it’s certainly something to be aware of as that feature increasingly becomes standard fare. Similarly, the My Moment tool that allows you to customize presets for things like the office and your commute is absent as well.

Sure, it’s great that Jabra gives you the ability to fine-tune the sound to your liking, but the default tuning is actually pretty solid. You have to rely on passive noise isolation to combat whatever is going on around you, but the main sound profile is comparable to what I’ve come to expect from Jabra. And that’s good for a set of $99 headphones. The only change I made was to keep the MySound profile active. I dabbled with presets and EQ changes before returning to the default audio. I found that songs lost some detail -- like hi-hats and subtle synth noise -- with the Jabra-made presets. So the default or “Neutral” option was always my preference.

There’s good clarity and solid depth to the sound on the Elite 45h. Though as expected, it’s not as immersive as some pricier over-ear headphones. Still, it’s good enough to be your everyday listening companion. Chaotic metal got a little jumbled at times, but those songs still had solid detail, with highs, mids and lows all getting ample room to work. The Elite 45h also struggles with boomy bass, like that on Run the Jewels RTJ4 and Phantogram’s Ceremony. While things never got too muddy, there was some loss of definition on songs with a lot of low-end.

Acoustic and synth-heavy electronic tunes fare much better on the Elite 45h. That clarity shines on folky tracks from Jason Isbell and Watkins Family Hour, and even with synthesizer-driven songs from Tycho and Steve Hauschildt. These headphones don’t have nearly the sonic range as pricier on-ear options like the Beats Solo Pro, but they’re good enough to handle most genres -- especially at this price.

Jabra boasts up to 50 hours of battery life on the Elite 45h. Working from home, I never came close to pushing that figure to the limit. But according to the Sound+ app, after about 14 hours of listening, I still had 73 percent left. In other words, you shouldn’t expect to plug these in too often. And when you do, there’s a quick-charge feature that will give you 10 hours of listening time in 15 minutes.

Jabra is positioning the Elite 45h as a solid option for calls in addition to music and other audio. There’s the aforementioned mute button which is handy in today’s virtual office environment, but the company also included noise-reducing microphones. You know, in case your home “office” isn’t always as quiet as you’d like. In practice, the results are a mixed bag. The person on the other side noticed that the Elite 45h sounded better than some true wireless earbuds I’d used to call them in the past (OnePlus Buds being the most recent). Still, these headphones didn’t do a great job of blocking background noise. The person on the other end noticed reduced rumbling when I was talking, but as soon as I stopped, they could hear it again. Even though there’s not a true ambient sound mode, I could still hear a bit of my voice during calls. I didn’t have to worry about shouting because I was overcompensating.

If the on-ear style isn’t for you, or you simply want a set of noise-cancelling headphones, Sony’s over-ear WH-CH710N is one of our current favorites. They were $200 when they debuted this spring, but as of this writing, they’re available for $128 at Amazon. With Sony’s mix of solid sound and ANC, the 710N is a great deal at that price. If you’d prefer on-ear with ANC, Beats Solo Pro is our top choice there. However, they’re more than twice the cost of the Elite 45h -- even if you can find them on sale in the $230-$260 range (regularly $299.95). The Solo Pro does offer great noise-cancelling performance and good overall sound quality, in addition to hands-free Siri and quick pairing with iOS thanks to Apple’s H1 chip.

Jabra’s Elite 85h were a solid set of headphones that were simply too expensive to recommend over the likes of Sony and others. With the Elite 45h though, the company packed most of its attractive features in an on-ear model that won’t break the bank. There are still a few things missing, but for the most part, Jabra has created an attractive and comfy option for $99. When you can save money without making a ton of sacrifices, that’s always a good thing.