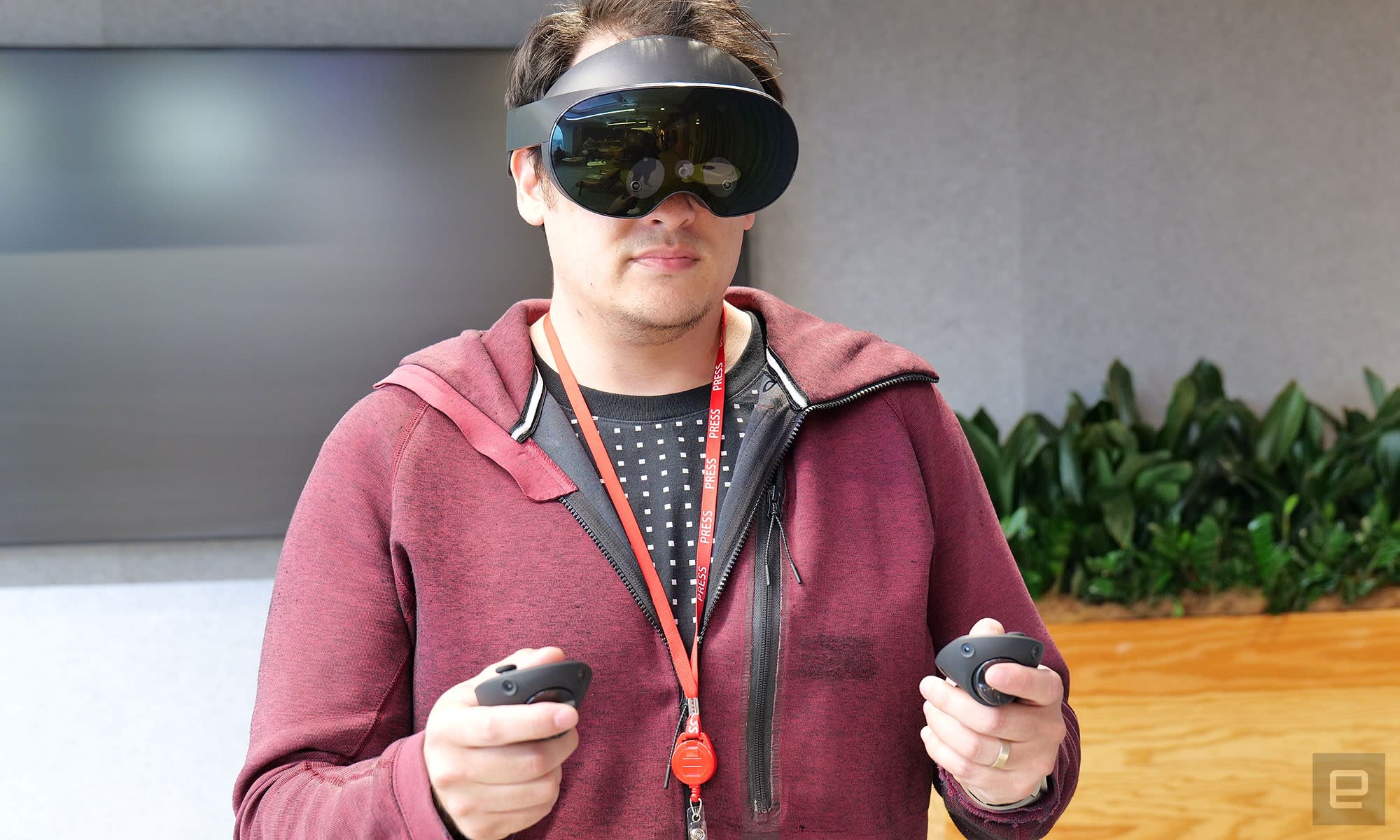 Meta Quest Pro hands-on: The $1,500 headset that ‘will enable the metaverse’

The company still has a lot to prove a year into its metaverse project.

Following the demise of smartphone-based headsets like Samsung's Gear VR and Google’s Daydream, virtual reality headsets have generally fallen into two camps: lightweight standalone systems like the Quest 2 and more sophisticated PC-based systems like the Vive Pro 2 and Valve Index.

But with the new Quest Pro, Meta is trying to combine the best things about both types of headsets into a powerful, but still very comfortable, self-contained unit. In fact, Meta believes so strongly in its next headset that prior to a demo session for press, Meta Product Management Lead Rupa Rao described the Quest Pro as “the beginning of an evolution in VR. It’s going to be our first multi-functional immersive computing platform that will enable the metaverse.” And after getting the chance to try it out myself, I can definitely see where that confidence is coming from.

Compared to the Quest 2, the Quest Pro is packing some major hardware upgrades including an all-new design, 10 sensors (both inward and outward facing) and completely revamped optics. The Quest Pro is also the first device to feature a Qualcomm Snapdragon XR2+ chip along with 12GB of RAM, 256GB of storage and a 90Hz refresh rate, which Meta says delivers 50 percent better performance than the Quest 2.

But to me, one of the best things about the Quest 2 is how comfortable it is. Due to its increased horsepower, it needs a way bigger battery. But instead of cramming a big power pack up front and making the whole headset unbalanced, Meta used a curved cell that’s integrated into the Quest Pro’s headband. Putting on the headset is also dead simple, as it sits on your head more like a visor and less like a helmet. This design allows you to peek at meatspace using your peripheral vision, which was an intentional choice by Meta: One of the company’s goals was to create something that lets you interact in both VR and IRL simultaneously. That said, if you want total immersion, there are side-mounted blinders that come in the box, in addition to optional full light blockers (though you’ll have to pay an extra $50 for those).

Adjusting the fit is also super straightforward. There’s a dial in back to tighten the headband. And for IPD interpupillary distance), you can move each eyecup left or right individually as needed. When it comes to optics, while the Quest Pro isn’t quite as light as the Quest 2, Meta switched to new pancake optics that are 40-percent thinner than traditional fresnel lenses to reduce the thickness of the headset.

Meanwhile, with a per-eye resolution of 1800 x 1920, the Quest Pro has a higher pixel density than the Valve Index (1440 x 1600 per eye) and the Quest 2, though it still can’t match stuff like the Vive Pro 2 (2448 × 2448 per eye). But even without a super high pixels per inch figure, visuals look great. Meta has managed to almost completely eliminate the screen door effect on a headset that doesn’t need to be tethered to a PC. It’s a great balance of resolution and high-fidelity graphics, with a battery that lasts between 60 and 90 minutes on a charge. And for those who want even longer VR sessions, you can also power the Quest Pro using the headset’s included charging cable.

The Quest Pro’s 10 sensors are split between five exterior cams and five inward facing ones. The outward-facing sensors serve two main purposes: they support full-color passthrough (the beta version of this on the Quest 2 is only black-and-white) so you can easily see the world around you from inside the headset. This makes it easier to switch between VR and meatspace without getting disorientated. And because Meta’s passthrough looks pretty sharp, it’s easy to see relatively small objects like keys on a keyboard (though not necessarily the letters printed on them).

But more importantly, the exterior cameras support what Meta calls scene understanding, which is part of the company’s presence platform. Scene understanding allows the Quest Pro’s exterior sensors to detect objects in the real world like walls, desks, tables, etc. While it might seem simple, this has a huge impact. For example, after I used the Painting VR app to create my very own Bob Ross, I was able to hang the painting on a wall in the room, so that anyone else who visited the space could see it too.

But it’s not just paintings either, because scene understanding allows the headset to do stuff like place a whiteboard on a wall for virtual work collaboration and even recognize stuff like a keyboard, so you can have multiple virtual screens set up in Meta’s Horizon Workrooms office app while still being able to bang away on physical keys. Really, scene understanding feels like a critical piece of Meta’s attempt to integrate VR with the real world, and because it's built into the company’s presence platform, developers can also easily use related APIs to support the tech in their apps.

Meanwhile, the Quest Pro’s inward-facing sensors are there to track your eye and facial movements. This supports stuff like foveated rendering, which allows the headset to provide sharp visuals where you're looking, while dialing down performance on graphics in your peripheral vision, which helps reduce the overall processing load. But honestly, while I know it might sound creepy, the eye and facial tracking make such a big impact when interacting with people in VR.

During my first demo of the Quest Pro in Horizon Workrooms, I had another representative from Meta showing various features, and one of the first things I noticed was that being able to read facial expressions and accurate head and eye movements just made conversation feel a lot more natural. Instead of having to remember to respond to every question with a verbal “Yes,” I could simply nod my head, and the other person would know to move on. This removes a lot of the awkwardness of interacting with people in a virtual space, which is often cited as a big barrier to VR adoption.

The Quest Pro’s face and eye-tracking goes further than that too though, because in addition to making avatars look more lifelike, it can also be used in games for stuff like motion capture or animating alien creatures using your own movements. Developers can even adjust some basic sliders to create more exaggerated effects. And once again, because eye and face tracking is built into Meta’s presence platform, the development tools are easy to access.

Aside from the headset, Meta also completely redesigned the Quest Pro’s controllers, which as a nice bonus will be backward compatible with the Quest 2. The new controllers have sensors built in, rather than relying on headset cameras to track their movements, which means you don’t need the big loops used on the Quest 2’s joysticks. But once again, those sensors also support much more precise hand and finger tracking. And it kind of just works. Using the Quest Pro’s controllers to paint and grab virtual objects felt incredibly intuitive. There was even a demo that let me play games like Jenga and Operation. And because the controllers felt so responsive, the tension was very palpable when I tried to remove blocks without knocking the whole tower down.

Over the course of about two hours of demos in seven or eight different apps, I came away thoroughly impressed. The Quest Pro might be the most comfortable VR headset I’ve ever used, particularly on a self-contained system with graphics this good. Getting in and out of the headset wasn’t that much more difficult than putting on a hat and putting my hands through the safety straps on the controllers, just like you would with a Wiimote or Nintendo Switch Joy-Con. And it’s important to remember that all of this is coming from a standalone headset, which means you don’t need to worry about wires or tethering it to a nearby and (probably expensive) PC with a discrete GPU.

That said, I still have a couple of small quibbles with the Quest Pro. I think its controllers really need better hand straps like those attached to the Valve Index’s joysticks, so you can more easily switch between using buttons and finger gestures without worrying about dropping them. And then there’s its price: $1,500. Given all the tech inside, I don’t think that cost is unjustified. But at the same time, that’s five times the price of a Quest 2, so it’s going to take a lot more justification to pony up that much money for a headset that’s still sort of in search of a purpose, at least for the general consumer. And let’s not forget, Meta remains very much in the process of building out a cohesive virtual world that people will want to visit. Especially in light of recent reports that even many of the company’s employees have been avoiding using Horizon Worlds due to bugs and issues with quality control.

But it really feels like Meta has addressed all the big hardware concerns. Face and eye-tracking unlock more natural conversations in VR. More precise hand and finger tracking make it easier to interact with virtual objects. And with a lightweight and very comfortable standalone headset that delivers better visuals than most of the tethered alternatives out there (aside from super expensive enterprise options like Varjo’s VR-3 and the like), the whole kit is super easy to use. The headset even comes with a wireless charging dock, which despite being a bit fiddly, makes it easy to store and have the headset ready to use whenever you need it.

After using the Quest Pro, I feel like this is the headset Meta really needs to provide a high-quality VR experience for building out apps and environments. Now I still don’t know if this is enough to convince people to work and live in VR, but when it comes to enabling the Metaverse, the Quest Pro seems like the big building block for making that happen

All products recommended by Engadget are selected by our editorial team, independent of our parent company. Some of our stories include affiliate links. If you buy something through one of these links, we may earn an affiliate commission. All prices are correct at the time of publishing.
View All Comments
Meta Quest Pro hands-on: The $1,500 headset that ‘will enable the metaverse’