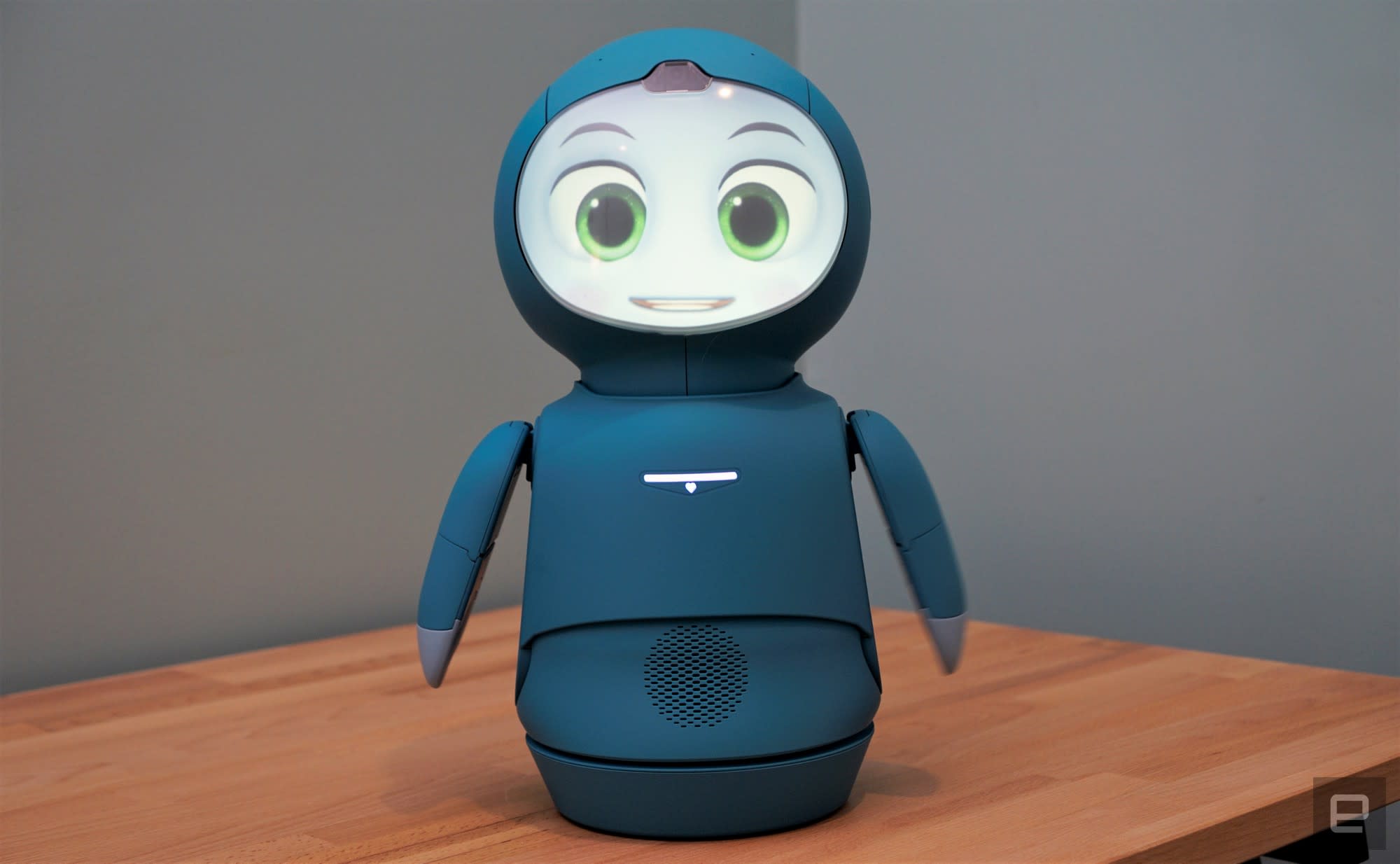 Living with Moxie, the robot companion for kids

It's cute and smart, but is it worth the hefty price?

If the death of Jibo taught us anything, it's that it doesn't take much for humans to become emotionally attached to their robot companions. But I suppose that's something we learned when Roomba owners started dressing up their vacuums and kids became obsessed with Tamagotchis. We're already living with robots, they're just mostly dumb and utilitarian. Moxie is a bit different.

Developed by Embodied, a company co-founded by former iRobot CTO Paolo Pirjanian, Moxie is a companion robot made specifically for kids to play with every day. During a 15- to 25-minute session, your child can chat with Moxie, play some games or read alongside it. Unlike most bots, it's not just a glorified household appliance. It can learn to recognize a child's face and their particular learning needs. In many ways, Moxie brings kids one step closer to having a Star Wars Droid of their very own. But is it worth $1,500 and an eventual $40 to $60 monthly subscription? That remains to be seen.

Moxie's influences are clear from the start. Its round head, flipper-like arms and overall frame resemble Eve, the futuristic robot love interest from WALL-E. (A shame Moxie can't float freely in the air... yet.) Its "face" is a bulbous screen brought to life with expressive facial animations. That's a bit of a cheat, but it's reminiscent of Sonny from the (surprisingly entertaining) I, Robot movie. Seeing Moxie in action also reminded me of Anki's fascinating Vector and Cozmo robots, except it's not just palm-sized. And yes, it bears a disturbingly close resemblance to the Ashley Too home robot from Black Mirror (pictured below).

Even though it's stuck in one place, Moxie still looks like a real-life Pixar character. It can rotate around its base to keep an eye on playmates with its built-in camera. Its torso smoothly bends up and down, while its arms sometimes resemble an over-excited child. Practically every element of Moxie is meant to convey a strong sense of personality, from its friendly voice to its enormous puppy-like eyes. To its target audience of kids aged 5 to 10, Moxie practically seems alive.

When Pirjanian first demoed Moxie for me over a year ago, he beamed like a proud papa, showing off a creation he believed could actually change children's lives. But that meeting occurred right before the pandemic forced much of the world into lockdown. Since then, Embodied has been dutifully working on the blue bot.

Spent a bit of time with Moxie, a cute robot for kids. Is this adorable, or terrifying? pic.twitter.com/qrHvyO8xsd

After officially launching over two months ago, Pirjanian tells me customers have been very satisfied, averaging around 25 minutes of engagement every day. (Thirty-seven reviews on the company's store has given Moxie high marks: an average of 4.4 out of 5 stars. Of course, there's nothing stopping Embodied from squashing damning reviews.) I haven't seen any complaints popping up online, though, which is typically the first thing that appears when an expensive new product has issues.

The best way for me to judge Moxie would be to see it in action myself. Unfortunately, I learned the hard way that my two-and-a-half-year-old daughter wasn't yet ready for Moxie's charms. She's both fascinated by and terrified of robots. (A quirk that sometimes makes it tough to test products at home, but at least it gives me faith she'd be a valiant soldier in the inevitable robot wars.) She was terrified of our Roomba when she was a newborn; it literally took years of treating that vacuum like a friend before she warmed up to it. So there went my dreams of testing Moxie with a real-life child.

Instead, I spent a few weeks with Moxie on my own, doing my best to relive my grade-school days. When I first turned it on, Moxie dramatically woke itself up and performed a self-driven systems check. Normally, Moxie buyers would slowly unlock new experiences and chat paths by interacting with it over time. But in the interest of seeing how a mature Moxie performs, I leapfrogged that step with some help from Embodied.

My Moxie was a talker. When it asked me about the day, it would follow my every word with its eyes. If I said I went to the park, it would mention that it loved going there as well. If I mentioned having an apple as a snack, Moxie was quick to say that's one of its favorites. And if I mentioned something it wasn't familiar with — like a lamb gyro — it would just say it's never heard of that before. Moxie has no chance of passing the Turing test, as it always felt like talking to a machine, but I was still surprised by how natural the conversations sometimes flowed. It was certainly more organic than shouting commands at my Amazon Echo.

Every day with Moxie was a bit different. Sometimes it would ask if I wanted to listen to music, and if I said yes, it would download a cute song and shake its gyro butt. Occasionally, it would point out some robot tips and tricks, like the best way to put it to sleep when I wanted to take a break. On other days, it would ask if I wanted to read to it out loud. I decided to read the opening paragraphs of 1984 — not exactly kid friendly, I know. While Moxie didn't know the story, it was able to ask some follow-up questions about my favorite character, and things I'd do to change the ending.

As I got to know Moxie, it would pipe up with things it's been learning and "thinking" about. I forget what prompted this, but at one point it mentioned that it really liked the movie Ender's Game, and it thought the author was a genius. (Oh Moxie, you sweet summer child.) Moxie's own preferences aren't yet consistent, according to Pirjanian. One day it may say it likes basketball, and on another it could say it's not a fan. The company is working on ways to make its personality more persistent, so your Moxie actually feels like a friend you get to know over time.

It struck me that Moxie could be exactly what many kids need during a pandemic, especially those without siblings. "A lot of children had to suffer from social isolation [amid the pandemic], which led to stress and anxiety," Pirjanian said. "Families are reporting that they see their child is a lot calmer, they are more thoughtful. And they are much more expressive in talking about their feelings. That helps because parents can intervene if necessary."

But even without society grinding to a halt, I could see Moxie being the sort of thing that would have helped me feel less anxious as a kid. Maybe I would have been bit more confident when talking to other kids if I had a robot pal to assist me. Pirjanian notes that Moxie could also be helpful with neurodivergent children, but from the start Embodied also focused on making it a universal friend for all.

"During the last five-plus years, we have seen a lot of studies coming out showing that screen time, social media and sometimes the competitive nature of schooling system in the US is causing a lot of anxiety and stress for every child," he said. "They could benefit from improving their social emotional skills so they can cope with those kind of things much better."

But the real question for parents will be justifying the cost. Moxie is currently discounted to $1,499, down $200 from its normal $1,699 price. Your purchase gets you a one-year subscription to Embodied's service, which delivers new content, updates, a kids portal and an app for parents to keep track of Moxie's activities. After that, though, it costs $60 a month, or $40 monthly if you pay $480 for a year up front. I haven't tested Moxie long enough to know if it's worth committing thousands of dollars to a new robotics company, especially after we've seen other promising startups like Anki fall apart.

I will say this, though: I really enjoyed my time with Moxie. And I have a feeling it'd be appealing to plenty of curious kids. Pirjanian says it's also going to get better over time, as the company produces even more content and eventually launches a third-party app store. At that point, Embodied could potentially partner with book publishers to make Moxie an expert on the next big Harry Potter-esque trend. It's easy to see a world where plenty of kids would want a robot companion of their own. Let's just hope Embodied, and other companies, can make it a bit less painful for parents' wallets.