MSI's latest GS66 Stealth may look the same as last year's model, but it has a lot more going for it. It's powered by NVIDIA's new RTX 30-series GPUs, and it's one of the first gaming notebooks with a 1440p (or 2K) screen. That's a big deal. For the last few years, laptop gamers could choose from low-resolution, 1080p screens with fast refresh rates, or 4K displays that pack in a ton of pixels, but also require a ton of power to render games.

1440p is a nice middle ground: It's sharper than 1080p, but isn't as demanding as 4K. The MSI GS66 Stealth, and other notebooks sporting 1440p, also supports fast refresh rates to make gameplay look silky smooth. So take this new screen tech, more power and the relatively slim design of the GS66 altogether, and it seems like a winner, right?

For the most part, yes. But I came across one major downside: tons of fan noise. That's the cost of cramming so much hardware into a thin notebook. And while fan noise is something every PC gamer has to deal with, the GS66's cooling system was far louder than most.

But let's start with the good stuff first. As soon as I got the GS66, equipped with NVIDIA's RTX 3080 mobile GPU, Intel's i7-10870H CPU and 16GB of RAM, I promptly installed Overwatch to see just how well its 240Hz 1440p screen performed. I wasn't disappointed. That 240Hz figure means the screen can display up to four times as many frames every second, compared to standard 60Hz monitors. The more data, the smoother everything looks. Pretty simple.

In Overwatch, I reached around 175FPS on average with epic graphics settings in 1440p. The fluidity of the gameplay made it easier for me to line up sniper shots or just wreak havoc as Junkrat. Sure, I've seen the game run even faster on last year's GS66, which had a 300Hz 1080p display. But that lower resolution delivered less detail whenever I slowed down to take a close look at Overwatch's characters and stages. With the new 1440p display, I could make out things like the fine lines in costumes, as well as distant objects and players that were a bit muddy in 1080p. I'd gladly trade off an insanely high refresh rate like 300Hz for a slightly better screen.

And while 4K screens are obviously sharper, gaming in 1440p requires a lot less horsepower. You'll likely see great results with the GS66 even if it doesn't have NVIDIA's most powerful graphics card. Most 4K screens have largely been limited to 60Hz refresh rates, so even if you could run a game well, it could never look as smooth as a 1080p screen. Ironic, isn't it? We're seeing 120Hz 4K screens now in pricey machines like the Razer Blade Pro 17, but that's still pretty rare.

1440p isn’t a particularly useful resolution when it comes to watching videos, but the GS66’s screen still made streaming content look great. That 240Hz panel also made browsing the web and perusing documents incredibly smooth — though you have to enable NVIDIA’s GPU manually to see the full benefits of that refresh rate. By default, the GS66 uses NVIDIA’s Optimus technology to automatically switch between the system’s integrated Intel graphics and the RTX 3080 GPU. That helps with battery life, but it also limits the screen to a more standard 60Hz with integrated graphics. And as a side note: If you’re still not sold on 1440p as the ideal gaming resolution, you can also snag the GS66 with a 300Hz 1080p screen or a 4K panel.

Moving on to a more demanding game, the GS66 was able to run Control between 55 and 75FPS with maxed out graphics and ray tracing settings. I had to use NVIDIA's DLSS technology to achieve that smooth gameplay though, which means it was actually being rendered at a resolution lower than 1440p, before being scaled back up with AI algorithms. Given just how taxing ray tracing can be, I've found DLSS to practically be a requirement with Control, no matter which system I'm playing on. 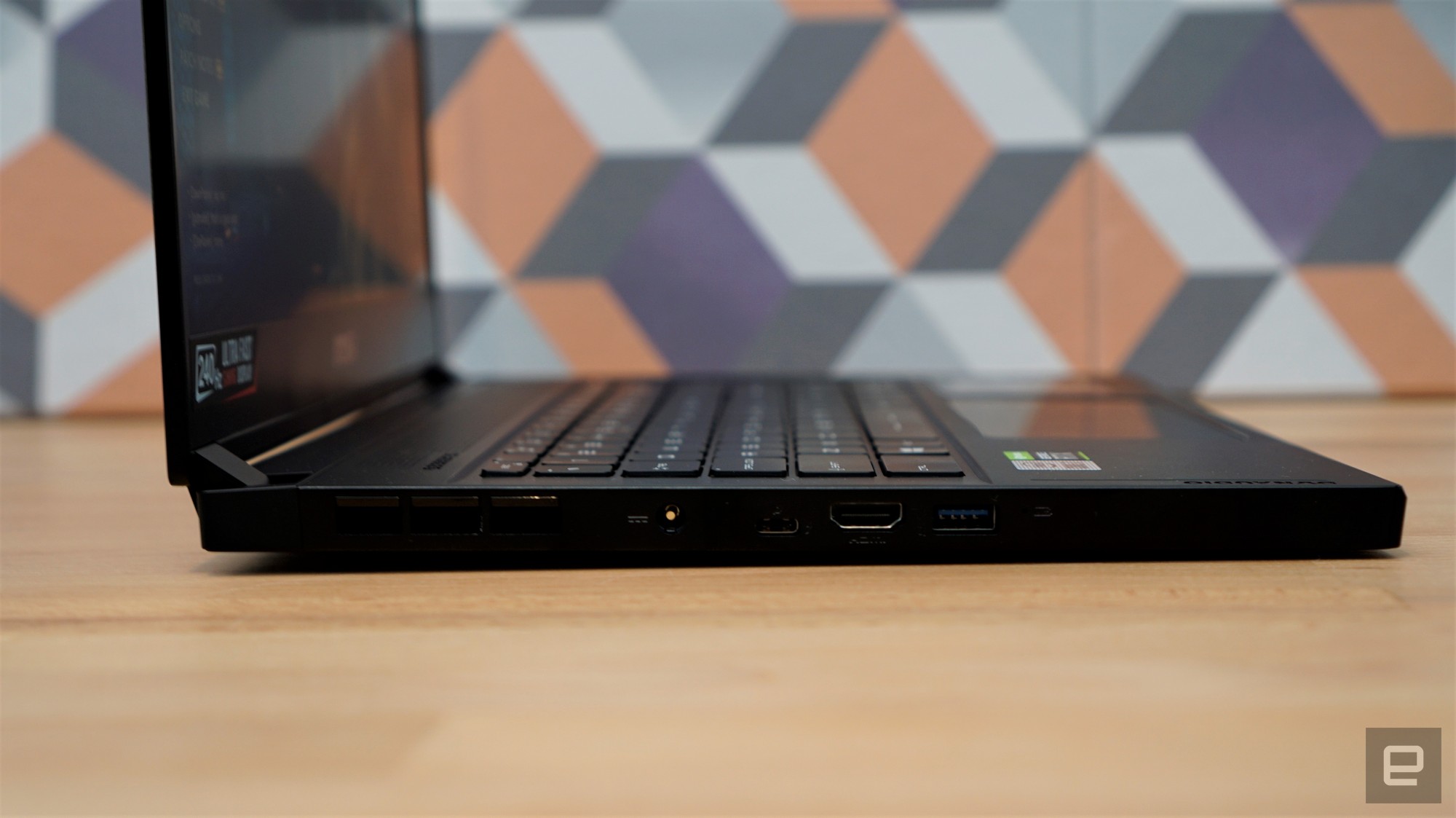 As great as its gaming performance was though, the GS66's fan noise started to wear on me over time. Simply loading the Overwatch menu screen made them spin up. It didn't matter what I was playing — the GS66's three fans made it sound like a jet getting to take off. They're not just loud, they're also incredibly whiny. You'd probably want to stick with a headset just to keep yourself sane. At the very least, MSI's overzealous cooling does a decent job of keeping the RTX 3080 at around 70 Celsius under load. I'm used to seeing GPU's soar past 80 degrees. Its underside does get hot when it's under load, but that's pretty normal for gaming notebooks.

Beyond its new internals, the GS66's design hasn't changed at all since last year. The thin and sturdy aluminum frame is back; it still weighs 4.6 pounds (putting it on par with the Razer Blade); and its LED back-lit keyboard and large trackpad haven't changed a bit. I would have liked to see MSI add a bit more depth to the keyboard — it's fine for gaming, but a bit mushy when typing. You've got a solid selection of ports too: three USB 3.2 Type A connections; 2 USB-C ports (one of which supports Thunderbolt); HDMI; and a 2.5 gigabit Ethernet connection.

The GS66 looks attractive and refined, though not as expertly honed as the Razer Blade. That makes sense, as Razer can focus its design strength on a handful of products, while MSI has a wide array of notebooks to take care of. I appreciate the understated look of the GS66, though. As long as you keep those RGB LEDs off, it could easily fit into a more professional setting. (At least, until those fans start whirring.) The GS66’s battery life also makes it a decent productivity machine. It lasted 8 hours and 25 minutes during our benchmark, almost a full hour more than last year.

So, should you buy the GS66? Here’s the problem for MSI: While it’s one of the first companies to deliver a 1440p gaming notebook, Razer, HP, and ASUS aren’t far behind. And given its noisy fans, it may be worth waiting to see how competitors handle cooling. MSI also hasn’t finalized pricing for this system in the US yet, so it’s hard to compare precisely. To put things in perspective, the Razer Blade 15 Advanced with similar specs (though twice as much RAM) is going for $2,900.

MSI has delivered a solid 1440p gaming laptop when it comes to pure performance — it’s just too bad about those fans. Maybe that won’t be an issue for some buyers. I’m just hoping a redesign fixes things for the next model. At this point, it’s clear that MSI is reaching the limits of what you can do with thin gaming machines.