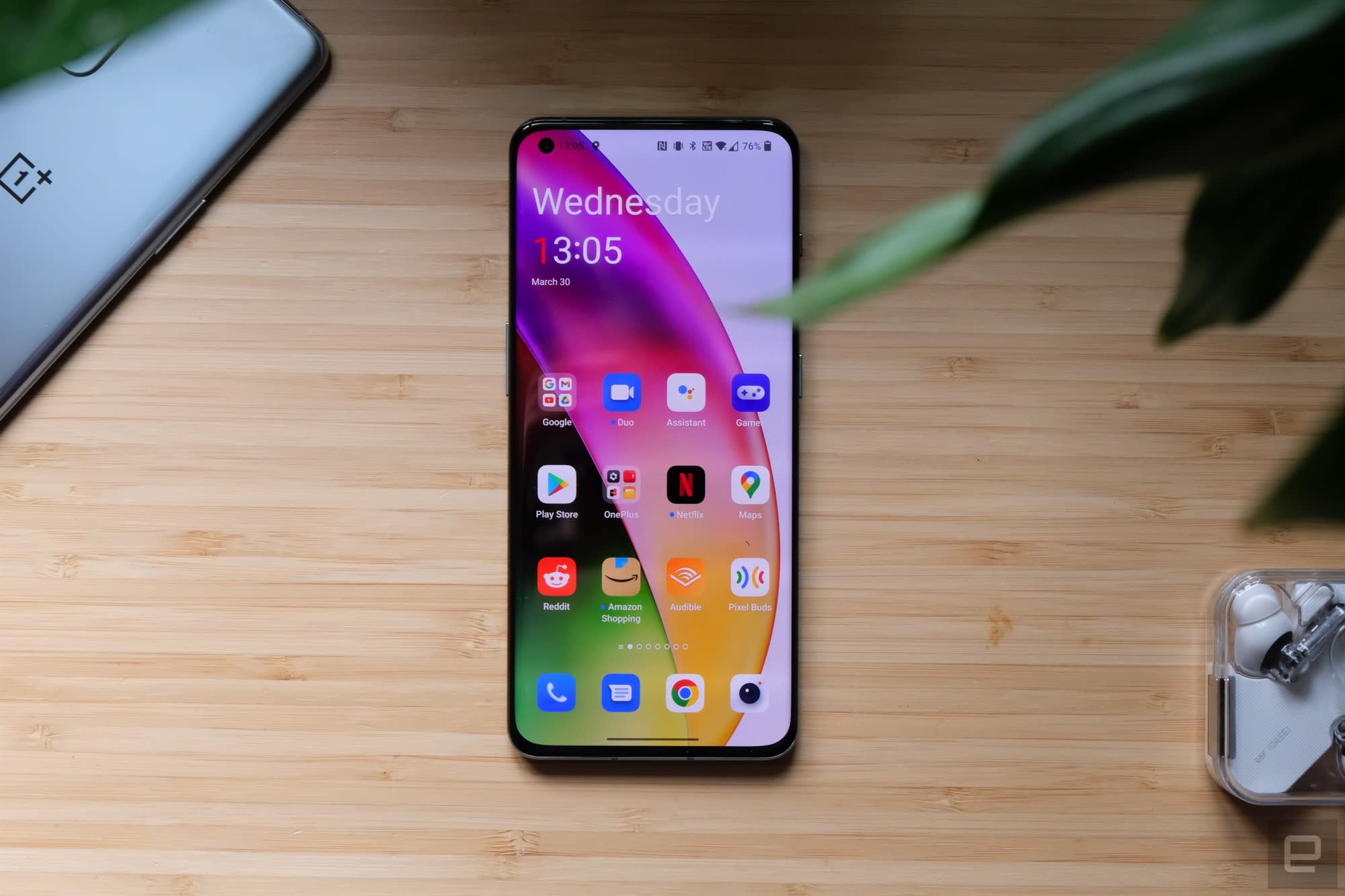 It falls short of greatness.

Last year’s OnePlus 9 Pro was one of the best phones of 2021 – which surprised some of us. The company substantially improved the cameras and packaged a high-spec phone in a premium body. Now, after several other OnePlus phones have launched with lower prices (and lesser specs), the $899 OnePlus 10 Pro, is finally here. The phone has long been available in China and the company has been teasing its new flagship since January.

With a cheaper price, a 6.7-inch 120Hz AMOLED screen, Snapdragon’s latest processor, a bigger battery and a gorgeous new green color option, the OnePlus 10 Pro sounds like it has everything it needs to repeat the success of its predecessor, but I’m left feeling underwhelmed.

The camera unit, which includes three sensors and a flash, is surrounded by metal which bleeds over the edge to the frame of the 10 Pro. It’s an understated design touch, but I’m glad it looks different from older OnePlus models, its Oppo stepsiblings and other phones doing the same old camera sensor layout. Different is good.

The rest of the phone’s back is covered in a translucent finish that reminds me of the back of the iPhone 13 Pro. The OnePlus logo seems to be etched into this; I actually thought it was a sticker at first. There’s still some Hasselblad branding, too, along the side of the camera unit, but thankfully it's a little subtler than previous designs.

OnePlus’s Alert Slider has clung on for its eighth year. Once again, it’s located above the power button and switches between silent, vibrate and full volume modes, each of which can be manually adjusted to your preferred levels. There’s a USB-C port, supporting 80W SuperVOOC charging and stereo speaker grilles along the bottom edge. Finally, as usual, there’s a volume rocker on the left edge.

OnePlus has upgraded the selfie camera to a 32-megapixel sensor, but it’s still a pinhole camera set in the top left corner of the display. The front-facing camera works with face unlock, while there’s also an in-screen fingerprint scanner. Both seem faster than OnePlus’ last-gen phone, and the fingerprint sensor has been shifted higher up the phone panel, making it easier to access.

While the OnePlus 10 Pro looks different from last year’s 9 Pro, there’s an awful lot of spec overlap. Both models have the same size screen and run at 1,440 x 3,216 resolution, with adaptive refresh rates of up to 120Hz. This year’s phone does have an upgraded LTPO display, however, which OnePlus says is better optimized for dynamic changes in refresh rates. But you’d be hard-pressed to notice any difference between the 10 Pro and 9 Pro's screens; both are crisp, bright and colorful. While more and more phones are beginning to arrive with adaptive refresh rates, OnePlus does it better than most, dipping as low as 1Hz for static content on your phone screen, meaning less power drain. According to OnePlus, the upgraded screen should translate to 1.5 hours of additional use versus last year’s OnePlus 9 Pro.

Comparisons with last year’s OnePlus 9 Pro come up yet again with the cameras. The company heralds this as its second-generation Hasselblad camera, with improvements to the OnePlus Billion Color Solution (which still struggles to sell itself as a compelling feature) and an updated Hasselblad Pro mode, which I’ll explain later.

Glancing at the spec sheet, even if the camera array itself looks notably different, the OnePlus 10 Pro has very similar camera sensors – and in fact there’s actually one less than last year’s OnePlus 9 Pro. Yes, we’ve lost the monochrome sensor, which shouldn’t be a big deal. It was a low two-megapixel sensor and I didn’t miss it at all. Otherwise, all the numbers match: a 48-megapixel primary sensor, a 50-MP ultra-wide lens – this time capturing across 150-degree views, and – like the OnePlus 9 Pro – a middling 8-megapixel telephoto option that tops out at 3.3x optical zoom.

My experience matches what Chris Velazco said last year in his review of the 9 Pro. The primary sensor captures detailed images, especially in well-lit surroundings. OnePlus has further refined the sensor to improve dynamic range and noise reduction in images, and you’ll still get the best shots from the pixel-binned 12-megapixel mode. If you do want to capture all the detail you can, however, there’s a high-res shooting mode that’s easily accessible through most of the camera app’s modes.

The new ultrawide camera gets a few tricks, too, including a new fish-eye capture mode that’s a bit of a gimmick, but it’s fun nonetheless. You can switch between a mild and strong fish-eye effect. I’m not going to win photography awards but the results are clean and it’s a harmless addition.

The telephoto camera remains the weakest part of the OnePlus camera setup. Given the 8MP resolution, shots seem blurry and low on detail. Sometimes my photos just lacked color and vitality, which is a shame because I use the telephoto cameras on phones a lot as it offers some degree of compositional freedom when framing my shots. (I can’t believe I just wrote the phrase “compositional freedom.”)

OnePlus’ flagship held its own against an iPhone 13 Pro and Pixel 6 Pro, but it wasn't the best. The cameras occasionally struggled with scenes with high dynamic range.

When shooting this scene, with a plant in front of an open fire and a bright neon sign in the background, the 10 Pro couldn’t quite tame the aggressive lighting, blowing out the neon light a little too much. The iPhone captured the scene in slightly warmer tones, while the Pixel seemed cooler. When I compared the photos, however, it was the OnePlus 10 Pro, even if it lacked the detail and dynamic range, that had nailed the colors of the room. Perhaps that Hasselblad partnership is actually working? Even then, would I prefer a more accurately colored shot or a wider dynamic range? The latter.

I had to see if anything had truly changed between the two OnePlus flagships, so I compared a few sample photos. While many were indistinguishable from each other, the 10 Pro edged out last year’s 9 Pro when it came to nighttime photography, which could be due to computational improvements and a faster chip – or OnePlus’ own internal calibrations and tweaks. Having said that, OnePlus’ night photography and AI assistance are a little too heavy-handed for my liking; they made some low-light scenes look artificially bright.

Software-wise, the new Hasselblad Pro mode works across all three camera sensors, adding fine control like ISO levels as well as 12-bit RAW capture for those willing to dive deep into image editing. OnePlus’ RAW+ image format is also here, which attempts to combine all the information of a photo, but it’s augmented by the computational image capture we’ve seen in most phones over the last few years. Was I using RAW+ capture over the stripped-down auto mode? Most of the time, no. But it’s more flexible for users willing to push the 10 Pro’s cameras to their limit.

OnePlus has long been able to balance a streamlined Android experience close to stock while adding its own tweaks and features. The OnePlus 10 Pro continues that approach despite the closer collaboration with Oppo and a shared codebase. In fact, the latest version of OnePlus’ OxygenOS, version 12, was apparently one of the reasons that the 10 Pro took so long to arrive after its debut, with more time needed to tweak the software for regions beyond China.

I still appreciate the ability to easily switch off OS additions I don’t need. The OnePlus Shelf is a pop-up menu that can be pulled down from the top right corner of the phone. It groups together several adjustable tiles – like those widgets you’ve been able to add to your homescreen on Android phones for about a decade.

In short, I don’t need it and would get frustrated when it pops up instead of the standard Android drop-down menu containing setting toggles and my notifications. Thankfully, I can just tap the settings cog inside the Shelf, and turn the entire feature off.

One addition I won’t be disabling is a new AI adaptive brightness feature. The OnePlus 10 Pro can learn your display brightness preferences and make adjustments, hopefully before you do. Artificial intelligence features inside smartphones are often hard to notice in day-to-day use (think: battery optimization features that are meant to adapt to how you use your phone and reduce power consumption). But OnePlus’ adaptive brightness soon appeared when I would check the 10 Pro in the early hours of the morning, helping to shield me from an unnecessarily bright screen before I’d even had my coffe

There are also a few gaming improvements to make the most of the Snapdragon 8 Gen 1 chip. The HyperBoost game engine, courtesy of Oppo, tries to stabilize frame rates during gaming sessions, while also increasing the responsiveness of the touchscreen through a new feature called O-Sync. Both suffer from my issues with behind-the-scenes AI optimizations. It’s also not compatible with streaming games from Xbox Cloud Gaming or Stadia, which is how I game on smartphones most of the time.

The OnePlus 10 Pro wasn’t fazed by anything I threw at it – which has been true for most phones powered by Qualcomm’s Snapdragon 8 Gen 1. When playing a video on repeat, the 5,000mAh battery took over 14 hours to run down – which isn’t great compared to roughly 17 hours from Samsung’s Galaxy S22+.

Benefiting from Oppo’s R&D, the OnePlus 10 Pro supports 80W SUPERVOOC charging. Yes, fast charging isn’t anything new for OnePlus, but damn, this is genuinely fast. With the appropriate charger (don’t worry, there’s one included with the phone), the 10 Pro can be fully charged in a mere 32 minutes. If you want even faster charging, OnePlus says 80W SUPERVOOC can charge the phone from 0 to 61 percent in just 15 minutes; I got around the same figures when recharging the phone myself. It’s a strong feature, and importantly, something that the OnePlus 9 Pro doesn’t have.

Unfortunately, US owners won't get an identical experience. In a forum discussion on the OnePlus site, the company clarified: “In North America, the OnePlus 10 Pro supports 65W SUPERVOOC – this is because 80W SUPERVOOC does not currently support 110 or 120-volt AC power – the typical standard for power outlets in the region." A 65W charging speed would still be the fastest phone charging standard in the US, but it's hard not to feel a bit short-changed compared to other regions.

OnePlus was on a roll. Last year, it proved it could deliver a true high-end smartphone rival to the likes of the iPhone and the Galaxy S series with the OnePlus 9 Pro. But with the OnePlus 10 Pro, the company has struggled to push the envelope further.

The OnePlus 10 Pro has impressive fast-charge capabilities, a gorgeous screen that’s incrementally better than last year’s model, while OxygenOS continues to add more to the Android experience without derailing it. I especially like how the green version looks, but at the same time, the smartphone competition moves fast.

OnePlus might have nailed its cameras last year, but it’s not at the same level of the best phone cameras in 2022. Its computational photography seems overly aggressive and the telephoto camera, again, disappoints compared to the competition. When the Pixel 6 Pro costs the same, the OnePlus 10 Pro is hard to recommend over Google’s own flagship, even to die-hard OnePlus fans looking to upgrade from the OnePlus 9 Pro. At least it’s slightly cheaper.

Correction, 3/31/22 10:50AM ET: Clarified that the US version of the OnePlus 10 Pro will only support 65W SuperVOOC charging. Also updated this article to clarify that both the green and black models with 8GB of RAM will be available in the US.