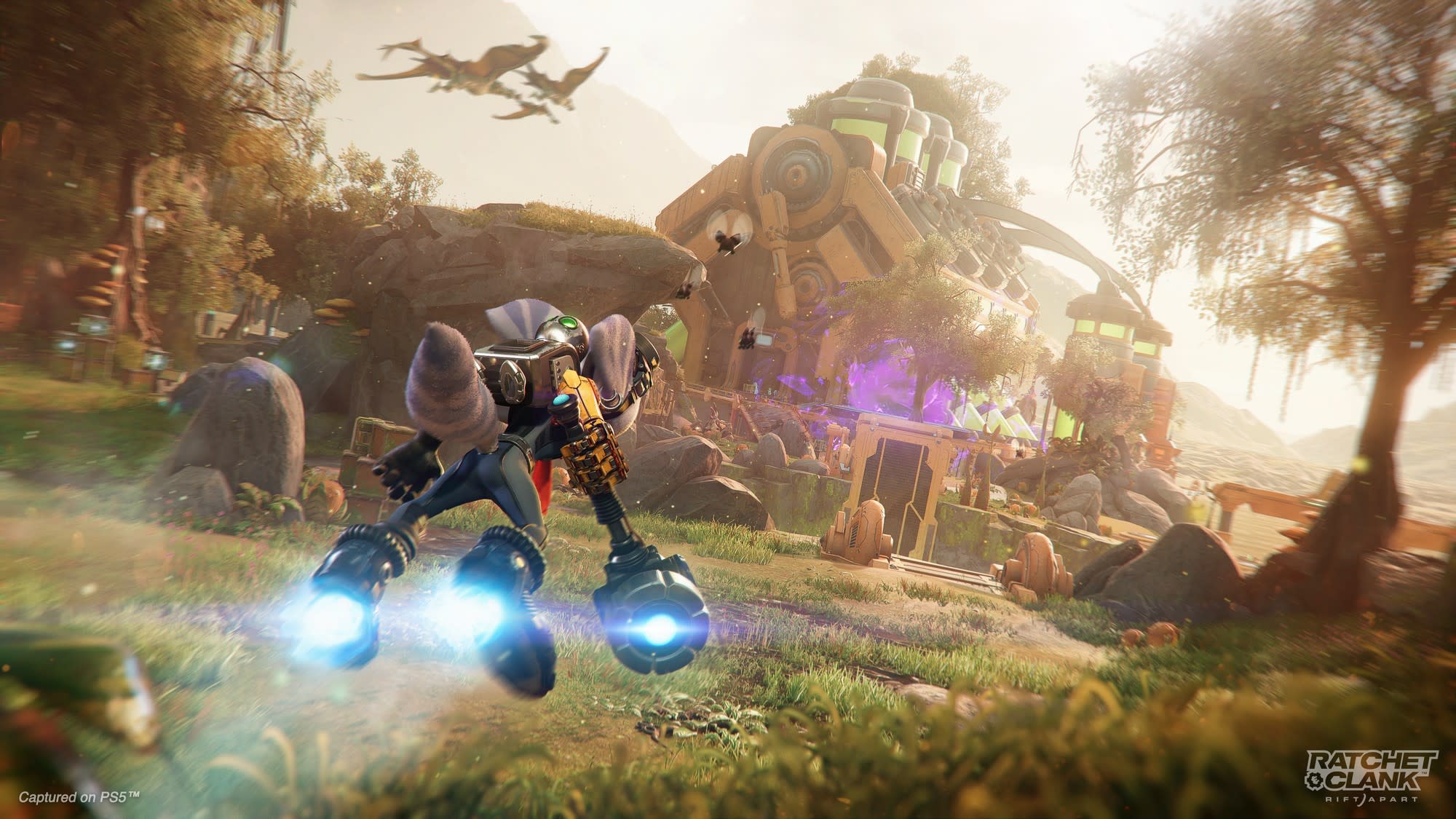 It takes full advantage of everything Sony's new console offers.

Following Cyberpunk 2077's botched launch, I've approached most new games with a increased hesitation. If it looks too good to be true, it probably is, right? So when we saw Insomniac Games' Ratchet & Clank: Rift Apart for the first time, my guard was up. It really looked like you were playing a Pixar movie, but I still had a hard time trusting the final experience.

After spending a few weeks with Rift Apart, I can confirm it genuinely lives up to the hype. It's a visual spectacle that's light-years beyond anything we've seen in consoles or even most PC games. While we've seen some games tap into the power of the PS5, like Spider-Man: Miles Morales, Demon's Souls and Returnal, Rift Apart is even more technically impressive, not to mention more accessible than those last two punishing games. It pushes technology like ray tracing to new heights, allowing for realistic reflections and shadows. And it takes advantage of the PS5's speedy SSD, letting you hop between completely different worlds in an instant.

I'd go as far to say that Rift Apart single-handedly proves why we need powerful new consoles. Sure, Insomniac probably could have released a cut-down version of the game that would have looked a bit better than the 2016 Ratchet & Clank. But there would be no ray tracing, vastly slower load times and simplistic controller rumbling. It would have been just another platformer. On the PS5, though, Rift Apart feels like a genuine leap ahead.

The game puts the series' heroes, the plucky Lombax Ratchet and his robotic sidekick Clank, on a dimension-hopping quest where they encounter alternative versions of themselves. There's Rivet, a female Lombax rebel, and Kit, a former war robot with a bit of an identity crisis. Together, they're out to stop the evil Dr. Nefarious from invading other universes (and potentially destroying the fabric of reality in the process). Longtime fans of the series will get a kick out of seeing slightly twisted versions of their favorite side characters, like the dopey Captain Qwark, but the game doesn't rely on much backstory, which is great for newcomers.

At its core, Rift Apart is still a Ratchet & Clank game: it's focused on delivering fun gunplay with a variety of creative weapons. (Personally, I'm a big fan of the Topiary Sprinkler, which freezes baddies in place with plants, allowing you to blow them away easily.) But what sets it apart is how it uses the PS5's hardware to polish the experience. Consider the way the game handles reflections. In its 4K/30fps "Fidelity" and lower-res/60fps "Performance RT" graphics modes, Rift Apart uses ray traced reflections that makes surfaces look almost life-like. A sleek floor in a shopping mall, for example, can accurately reflect the enemies and psychedelic lighting effects right above it.

According to Mike Fitzgerald, Core Technology Director at Insomniac Games, the studio realized early on that reflections were a major differentiator from the PlayStation 4: "There's tons of curved glass surfaces, futuristic metal places, and spaceship concepts where [ray traced reflections] were adding so much, that we decided to say, 'Hey, let's use as much of that power as we can specifically for reflections.'"

You can see the difference immediately in Rift Apart's "Performance" mode, which forgoes ray tracing in exchange for higher-resolution rendering at 60fps. Sure, it makes the game look smoother, but without realistic reflections, surfaces just look dull and blobby. It's as if the very life is sucked out of the world.

"For Ratchet and Clank, specifically, one of the game's biggest strengths is its visuals," said game director Mike Daly. "I think one of the reasons its visuals stand out is because we're starting with an engine [originally built for Spider-Man] that was geared for photo-realistic rendering and a lot of techniques to make a frame believable. So when you combine that with a strong sort of art style that's very colorful and more creative, you get this... world that's fun, but has all these elements that let your brain sort of buy into it and makes that sort of creative cartoon world be more immersive than it ever has before."

Ratchet & Clank's art direction has always had a distinct style, but in Rift Apart the Insomniac team was able to push everything to an entirely new level. Ratchet's fur now has individually rendered hairs, and there's an obsessive level of detail across the game's armor, weapons and enemies. 4K rendering demands high-quality assets, after all. Both Daly and Fitzgerald say they prefer the game's Fidelity graphics mode, just so they can see the results of their hard work at the best resolution. Personally, though, I'll always favor 60fps modes, which makes gameplay look and feel much more fluid. I mostly stuck with Performance RT, which gave me that faster framerate together with ray tracing.

What's even more impressive is that Rift Apart is able to deliver its ridiculously detailed assets at lightning-fast speeds. It takes around 10 seconds to start playing the game after launching it — there's more of a delay for mandatory studio logo screens than actually loading the game. And since everything is being rendered in-engine, there's no delay between cutscenes and gameplay either. You'll also hop across multiple planets, in addition to rifts, without any visible load times too. Rift Apart even brings in some cinematic language, includingStar Wars-like wipe transitions between scenes, to show off how smooth its load times can be. (The latter is particularly astounding, since the PS5's memory has to hold everything you can see in those wipes at the same time.)

Much like the pack-in game Astro's Playroom, Ratchet & Clank: Rift Apart uses every aspect of Sony's DualSense controller wisely. The adaptive triggers make every weapon feel a bit different: shooting with the Drillhound, for example, requires locking onto enemies by pressing the right trigger down half-way. That's something the Ricochet gun doesn't need, though, so you can just click down all the way to start juggling enemies with its pinball-like ammo. I even appreciated the more subtle haptic features, like the way the controller gently rumbles as Ratchet and Rivet walk across different surfaces. The more I played this game, the more disappointed I became with Microsoft's Xbox Series X controller, which didn't change much from the Xbox One.

Even though I found a lot to love about the Xbox Series X and PlayStation 5 when they launched, both Microsoft and Sony are still in a transition phase more than six months later. There aren't a ton of new games for these consoles, so most players are settling for slightly better performance in cross-generation titles like Assassin's Creed Valhalla. Sony is doing the better job of pushing out next-generation exclusives, though. Sorry, Microsoft, The Medium isn't enough. And now with Ratchet & Clank: Rift Apart, the PlayStation 5 has its first genuine masterpiece.