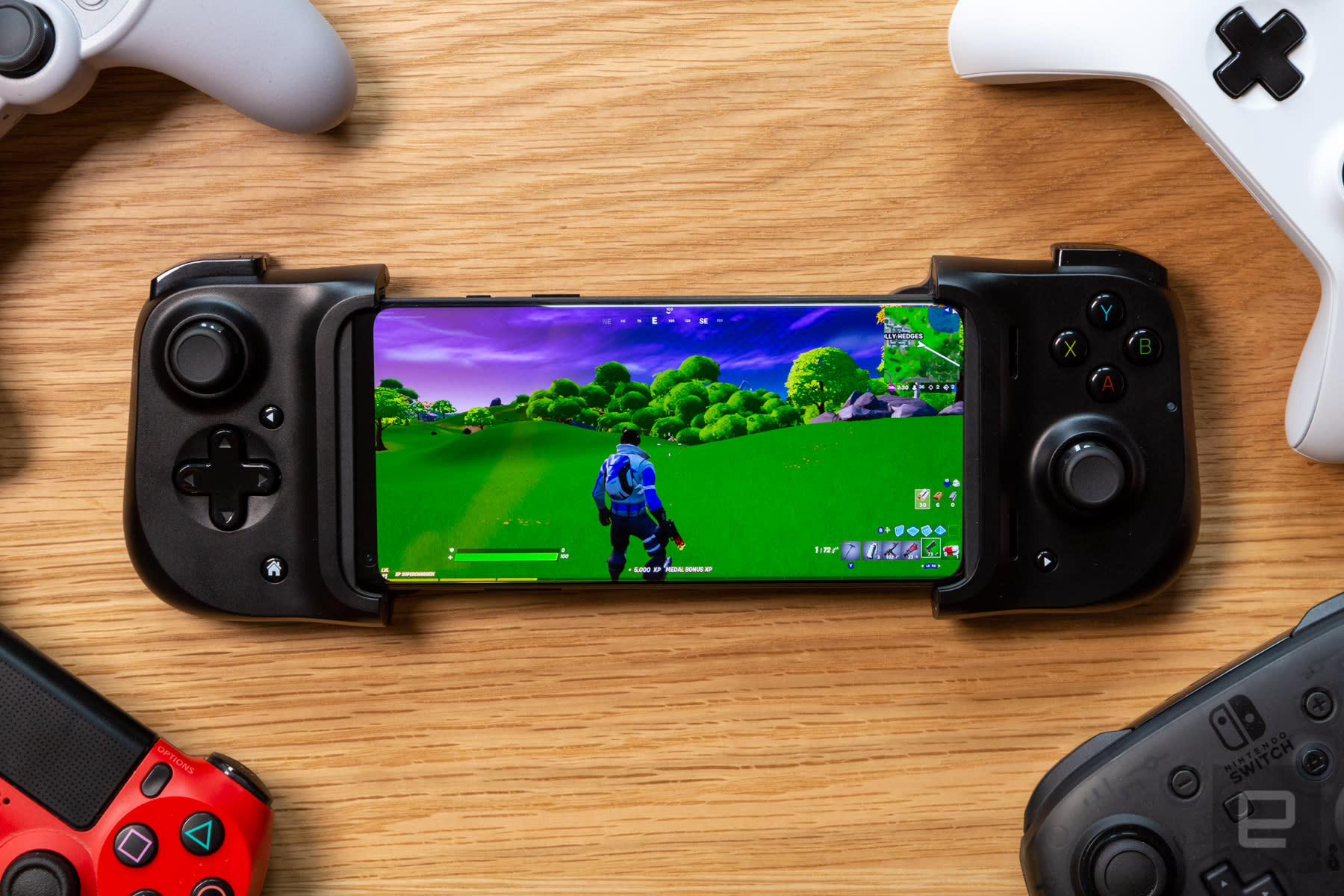 I just wish the back was a little more comfortable.

Every smartphone can double as a powerful gaming device. There's just one problem: They don't have buttons. Well, not beyond the tiny nubs that line either side of their wafer-thin frame. If you're craving real buttons and triggers, you basically have two options: a wireless controller and phone clip combo, or a third-party accessory that turns your device into a Nintendo Switch clone.

One name dominates the latter category: Gamevice. The California-based company wasn't the first to market, but its initial effort stood out with decent — if not mind-blowing — design and build quality. These days, the market is littered with alternatives developed by Chinese companies like Flydigi and Saitake. They can be hard to come by, though, and most rely on a Bluetooth connection. Razer made a similar product called the Junglecat, but the detachable controllers snapped on to cases that only supported a handful of devices. Gamevice is still around, but its current offerings are similarly designed for specific iPhone and Android models.

Enter the Razer Kishi. The $80 Junglecat follow-up, co-designed by Gamevice, seems, on paper, the best solution to date. It has a wired connection, for instance, and doesn't need to be charged. The Android version supports almost any smartphone, too. But how does it compare with a traditional controller and phone clip combo? Quite admirably, provided you have smaller hands or don't mind playing with shrunken sticks and triggers.

Connecting your phone is simple. Flip the Kishi over and you'll find a plastic plate with some release latches above and below. Push these outward and the plate will detach, revealing a rubberized belt that gently stretches the two sides of the controller. Razer recommends pushing your phone into the Lightning or USB-C connector first then easing the left side of the controller until you have enough space to secure the other end of the display.

I never felt that the Kishi was going to slacken and allow my OnePlus 8 to wriggle loose. If you use a case, however, you'll need to take it off. That adds to the assembly process and could be annoying if you're traveling — on a plane or crowded train, for instance — and don't have an obvious place to put it. I don't have that problem with the phone clips I've bought for Microsoft's official Xbox One controller and 8BitDo’s wonderful SN30 Pro+ pad.

In its disassembled form, however, the Kishi is smaller than both of these accessories. So small, in fact, that it can slide into the fraying back pocket of my favorite jeans. At 265 grams, it's also a touch lighter than my Xbox One controller. To be frank, I've never used a pad and phone clip outside the house — I just don't want the extra bulk in my backpack. But Kishi's dinky form factor, is a tempting proposition. In a post-COVID-19 world, I can imagine myself taking it out and playing something more involved than Threes and Alto's Odyssey on the bus.

A better point of comparison is arguably the Switch. Each side of the Kishi controller is slightly wider than a standard Joy-Con. Combined with my OnePlus 8, the Kishi was roughly 20mm broader than Nintendo's hybrid system. It might not sound like much, but trust me, the extra width has a massive impact on how the Kishi feels over longer play sessions. The larger size was never uncomfortable, but I would often find myself with both elbows planted on the table or putting the entire device down between online multiplayer matches.

The Kishi’s analog sticks are almost identical to those on a Switch Joy-Con. They’re large enough for my tiny hands, but I suspect some will prefer the heftier sticks found on Sony's DualShock 4 or the Switch Pro controller. Unlike Nintendo’s Joy-Cons, they have a convex top that makes them slightly easier to click. I do wish the outer rim was coated in a grippier material, though, similar to the official Xbox One controller. Sometimes my fingers would shift and slide around on the sticks — never to the point where they came off, but enough for me to worry during a tense Fortnite showdown.

The face buttons (A, B, X and Y) on the right are slightly larger than the ones on Nintendo’s portable system. The left side of the Kishi, meanwhile, has a traditional cross-shaped D-Pad. It’s a welcome change from the Switch's separated arrow buttons. (An understandable compromise so you can break off and use the Joy-Con as a standalone controller). I’m grateful for the D-pad, though it feels a bit spongy and imprecise. The bumpers are small but clicky, and the twin triggers have a surprising amount of travel for shooters and racing games.

Unfortunately, the back of the peripheral doesn't feel as polished. There's no obvious place to rest your fingers, which feels like a bizarre oversight. My confused digits eventually settled in the recessed areas between the rubber belt. It never felt natural or comfortable, though. If Razer and Gamevice release a successor, I hope it has proper grips on the back or at minimum some kind of rubberized material similar to the PlayStation Vita.

But hey, at least you don't need to charge it. Unlike most Bluetooth controllers — which include full-size pads and Switch-style peripherals like the Flydigi Wee 2T — there's no separate battery to worry about. The Kishi also supports passthrough charging, which means you can top up your phone while the controller is still connected. Wisely, the port is on the bottom of the Kishi’s right-hand grip, ensuring your wrist, fingers and thumbs aren't constantly brushing against a cable. It doesn't support USB-C headphones, though, so you'll need to make do with your phone's built-in speaker making it through two thin slots on the right-hand side of the Kishi or a pair of Bluetooth-connected buds or cans.

Razer has an optional app to help you discover controller-friendly games. There's also a launcher section that highlights "fully supported" apps on your phone. It's a nice idea, but the software is a little dull and half-baked. I tried the Kishi with a number of native Android applications including Fortnite, Minecraft, Grand Theft Auto: Vice City and Sky: Child of Light. The controller worked instantly and flawlessly with all of these games. I was particularly impressed with Asphalt 9: Legends, though, which lets you choose between finger-friendly Touchdrive controls and a completely manual setup that plays identically to a console racing game.

Conversely, some games didn't work at all. These included the newly released Forza Street, Riot's Legends of Runeterra, and select indie games including Oxenfree. The problem wasn't unique to the Kishi — these games simply haven't been optimized for physical controllers and won't work with a DualShock 4 or 8Bitdo either. The sole exception I could find was Call of Duty Mobile. The Tencent-developed title doesn't seem to work with the Kishi, despite supporting select Bluetooth controllers.

Razer is pitching the Kishi as a companion for early streaming adopters, too. If you own the correct smartphone, the Kishi will work with Google Stadia, Nvidia's GeForce Now and Microsoft's still-in-beta Project xCloud service. Thankfully, my OnePlus 8 is compatible with all three. I played the opening hours of Destiny 2 on Stadia, A Plague Tale: Innocence on GeForce Now (via a copy that I bought on Steam) and Forza Motorsport 7 on xCloud.

I'll be honest: I'm not sold on phone-based game streaming just yet. The screen is simply too small for titles that have clearly been optimized for laptop and desktop screens. I could barely read the HUD while playing Destiny 2, for instance, or the subtitles that accompanied the opening dialogue in A Plague Tale. That isn't the Kishi's fault, of course. The smaller sticks and buttons would occasionally frustrate me while playing multiplayer titles, though. If you boot up Apex Legends, for instance (the Origin version is accessible via GeForce Now), you'll be playing against a PC community that primarily uses mouse and keyboard. Competing with a full-size controller is hard enough — using the Kishi is basically a death wish.

The peripheral is fine for single-player games, though. I would happily use the Kishi to complete some side quests in Assassin's Creed Odyssey (available via Stadia) before tackling some tougher story missions at home on a TV. The Kishi is perfect for slower-paced titles, too, such as Telltale's Batman series (via xCloud), Football Manager 2020 (via Stadia) or Square Enix's Octopath Traveler (via Stadia).

Many people use Gamevice-style controllers to play retro games on their phone. I tried the Kishi with multiple Android emulators including Drastic (Nintendo DS), Redream (Dreamcast) and Citra (Nintendo 3DS) and didn't run into any problems. Some of these apps require some button mapping before you load up a legally obtained ROM. I only had to do this once with each emulator, though, and the process always took less than 60 seconds. In some cases, the Kishi is actually better than the original system or controller. It has a right analog stick and two extra triggers compared to the original Nintendo DS. That means you can set up custom control schemes that are more comfortable and convenient to use.

The peripheral's wired connection promises "virtually zero latency." I tried to compare the input lag with a Bluetooth controller, but it's virtually impossible unless you own two identical smartphones and a camera that can shoot in ultra-slow-motion. The Kishi was always responsive to my button presses, though. A wired controller can't fix a laggy stream, but it does keep everything on your side as reliable and consistent as possible. If nothing else, it was a small comfort while trying to avoid headshots in Apex Legends.

The Kishi is an easy recommendation if you want a Gamevice-style peripheral. But if you're comparing the device to a full-size controller and phone clip, there's no clear-cut winner. The Kishi is more portable, has a wired connection and doesn't require charging. The sticks and triggers are smaller, though, and it's generally less comfortable to hold than a DualShock 4 or Xbox One controller. The Kishi's $80 price-tag is a tad more expensive than many pad and phone clip combinations, too. At the time of writing, you can get an 8BitDo SN30 Pro+ and clip for $59.98 on Amazon or an official Xbox controller and Microsoft-approved PowerA MOGA Mobile Gaming Clip for $74.98.

What's undeniable, though, is the need for good smartphone controllers. Video game streaming will only get better in the coming years. Similarly, the number of native apps with controller support is only going to rise. (That's especially true if platform holders persevere with subscription services like Apple Arcade.) The emulation community, meanwhile, will keep tweaking and optimizing its legally gray apps. With that in mind, I'm glad we're getting new peripherals like the Razer Kishi. Smartphones are shipping with increasingly powerful chips and displays; it's about time we had some new purpose-built controllers to match.