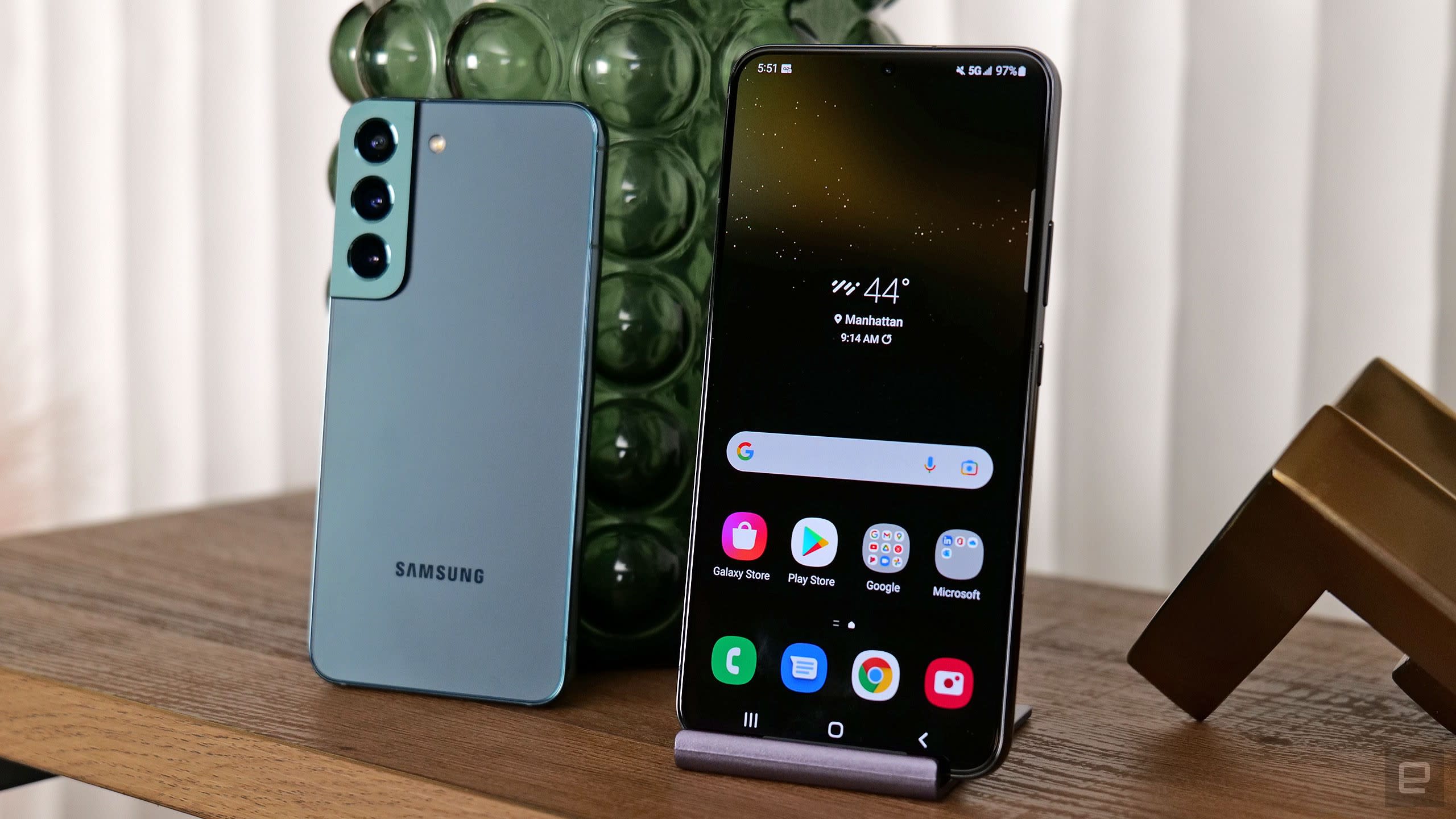 Samsung Galaxy S22 hands-on: It's more interesting on the inside

While the outside might look familiar, Samsung has tacked on some major camera, display and performance upgrades.

You’d be forgiven for thinking the newly announced Galaxy S22 looks a lot like last year’s phone. It does. But after being able to go hands-on with the S22 and S22+, it’s clear that, as with many things, it’s what’s inside that counts. And for 2022, Samsung has packed in some major upgrades for the S22’s display, performance and cameras that really separate it from last year’s device.

Now, before we move onto the new tech, some of the S22’s design tweaks include an updated range of colors (black, white, green, and pink) and the use of a new material created from recycled fishnets–which Samsung employed to make the phone’s key bracket, with additional post-consumer recycled material also used in the S22’s speaker module and side buttons.

Elsewhere, both the S22 and S22+ feature flat–not rounded–displays made from Gorilla Glass Victus+, a chassis constructed out of Samsung’s Armor Aluminum alloy, a 40-megapixel center-mounted selfie shooter and three rear cameras: a 50MP wide, 12MP ultra-wide and a 10MP telephoto with a 3x zoom. So not a huge change, but it’s not like the S21 needed a complete revamp anyway. At the same time, it’s important to note that at 6.1 and 6.6 inches, respectively, both the S22 and S22+ have slightly smaller screens than their predecessors. And before you get your hopes up, none of the new S22s have a headphone jack or an SD card reader.

Instead, Samsung concentrated on improving a number of the S22’s most important components. So while the S22 and S22+’s FHD+ screens still top out at 120Hz, Samsung decreased the lower limit of their refresh rates to just 1Hz (down from 10Hz) to help save on power even more. Meanwhile, both phones got significant brightness upgrades, with the S22 capable of hitting 1,300 nits in direct sunlight, while the S22+ goes even higher, peaking at 1,750 nits. Frankly, Samsung has been making the best mobile displays on the market for years, and even though I only had a short time with the new S22s thus far, the S22’s brightness is quite impressive even compared to other premium handsets like the iPhone 13.

That said, perhaps the biggest display innovation on the S22 is Samsung’s new Vision Booster feature. By using the ambient light sensors built into the phone, Vision Booster adjusts screen settings like contrast and color saturation to make content easier to see both outdoors and in low-light environments (like watching a movie on your phone before bed). But I should mention that because Samsung’s demo area didn’t have a lot of super bright or dark environments, Vision Booster is something that’s definitely going to require some more in-depth testing to properly evaluate.

On the inside, in addition to 8GB of RAM and either 128GB or 256GB of storage, the S22 also features Qualcomm’s 4nm Snapdragon 8 Gen 1 chip (or an Exynos 2200 for most folks outside of North America). That said, there are some important differences in specs between the S22 and S22+, as the S22 tops out with 25-watt wired charging, a 3,700 mAh battery and Wi-Fi 6, while the S22+ gets 45-watt wired charging, a 4,500 mAh battery, slightly faster Wi-Fi 6E, and UWB (ultra wideband) communications. Both phones feature 5G, 15-watt wireless charging, ultrasonic in-screen fingerprint readers, IP 68 dust and water resistance and the same resolution cameras in front and back.

But the phone’s cameras are clearly where Samsung invested much of its resources, which makes sense now that the Galaxy S line is facing increased competition from handsets like the iPhone 13 and Pixel 6. On the S22, the most important camera upgrade is the phone’s new 50 MP wide-angle camera, which Samsung claims features pixels that are 23 percent larger than before to draw in more light in dark environments. Then, to boost its “Nightography” features even further, the S22 uses a four-to-one pixel binning technique that combines four adjacent pixels into one big pixel for additional low-light sensitivity.

And for those who want extra help capturing crisp videos, Samsung also added a new Auto Framing feature that can track up to 10 subjects at the same time while adjusting the camera’s focus and framing, with a new Advanced OIS tossed in to help iron out any bumps or shaking. During my hands-on session, while I didn’t have multiple people to stick in front of the S22’s cameras, the phone still did an impressive job of locking onto my colleague Cherlynn’s face, even as she bobbed and weaved throughout the frame. And I didn’t even have to tap the phone’s screen to lock on to her face.

Alternatively, if you love shooting portraits, the S22 also employs a new AI Stereo Depth Map process that can more easily distinguish the difference between your subject and the background for enhanced bokeh and studio lighting effects. And new on the S22, Samsung’s Portrait Mode works on pets too.

When it comes to software, the S22 comes pre-loaded with One UI 4.0, which is based on Android 12. This means you get all of Google’s recent security upgrades including notifications when apps use the phone’s mics or cameras and the new Privacy Dashboard, along with extra home screen customization options and more. And to make storing things like digital IDs, credit card info, and travel documents on your phone a bit easier, the S22 has a new secure storage feature called the Samsung Wallet. There’s even a new live sharing feature in Google Duo that lets S22 owners stream videos to other people on the call similar to Apple’s SharePlay feature in iOS 15. Unfortunately, neither the Samsung Wallet or live sharing in Google Duo were available for testing, so stay tuned for more updates on those.

On top of that, for the entire S22 line (including the S22 Ultra), Samsung is stepping up the length of its software support to four generations of Android updates. So while Samsung’s software support still isn’t quite as extensive as what you’d get with an iPhone, it’s longer than basically anything else in the Android world.

But what might be the best part about all of this, is that despite all the software and hardware upgrades, starting at $800 and $1000, the S22 and S22+ will cost the same as last year’s Galaxy S phones.

In a lot of ways, the S22 feels like the “tock” to the S21’s “tick.” Last year, Samsung rolled out a fresh new design, and now Samsung is following that up with a bunch of upgraded tech. Sure, the outside of the phone may have not changed a ton, but the updated colors look good, and coming from someone with a Phantom Green Z Fold3 that actually looks gray 99 percent of the time, the new green on the S22 is much richer and way more satisfying. And while we’ll need time to put the S22 through its paces, Samsung investing so much time and effort in the phone’s new cameras really shores up the biggest weakness of last year’s device. So even though it’s too early to hand anyone the crown for the best phone of 2022, the S22 feels like a thoughtful sequel to an already strong base.

Pre-orders for the Galaxy S22 and S22+ start today with official sales beginning on February 25th. And for those who do pre-order, Samsung is including a free upgrade to the next storage tier and $100 worth of Samsung credit (or $150 for the S22+).