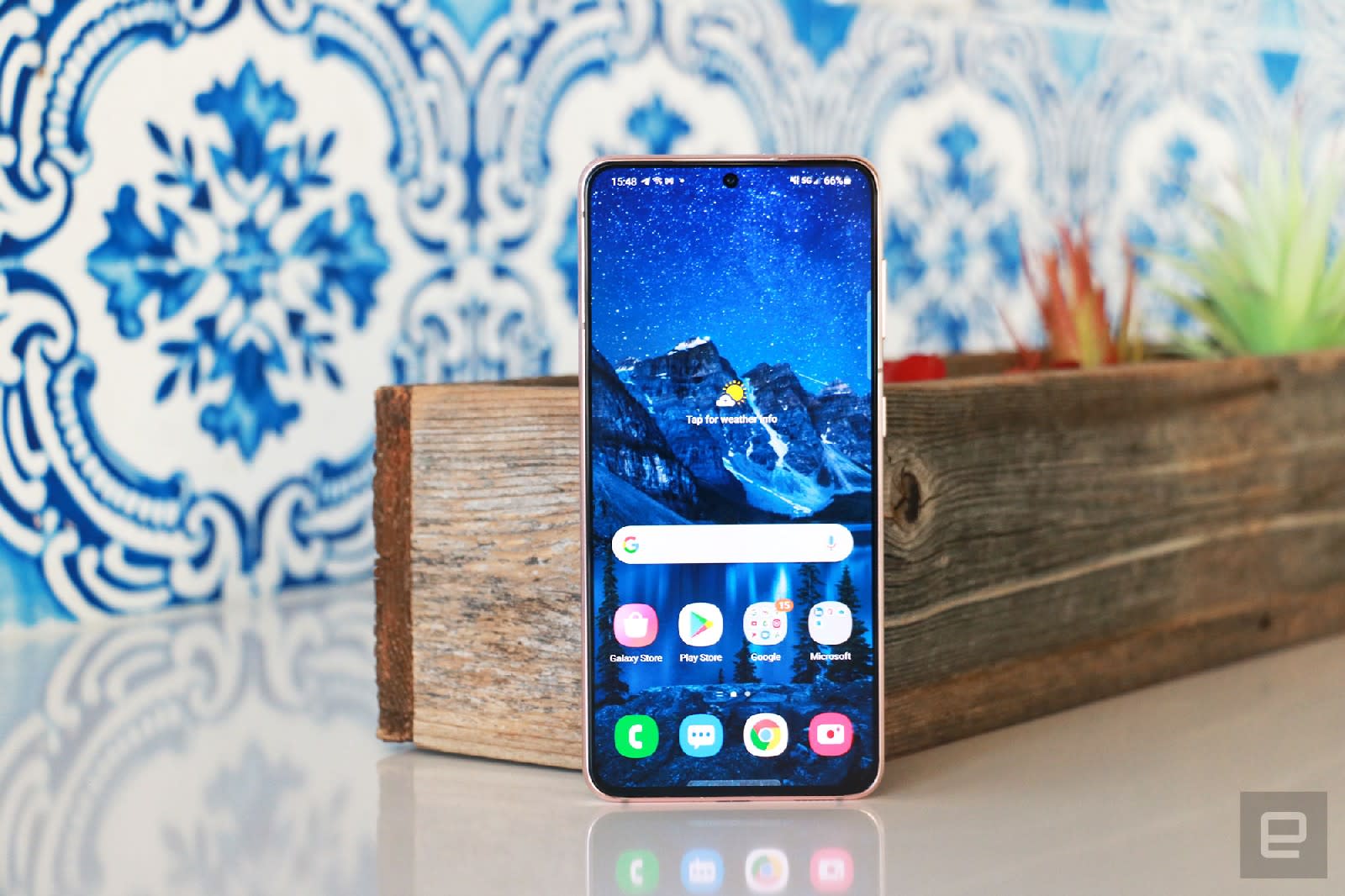 With a more reasonable price, the baby of the family is a solid pick.

Welcome to a world where less is more. The Galaxy S21 is the entry-level model of Samsung’s new trio of flagships, and it offers a compelling mix of features for the price. It starts at a more-reasonable $800, has a tiny-hand-friendly 6.2-inch screen and doesn’t bother with the ridiculous 100x Space Zoom. (Though, you can still get that on the $1,200 S21 Ultra.) You won’t get S Pen support, sure, but the S21 still uses a high-end processor and a speedy 120Hz screen for smooth animations. The Galaxy S21 is a distillation of what most users want and ditches the superfluous stuff. But in the land of sub-$800 Android phones, the S21 faces stiff competition.

Last year, I said the S20 didn’t have the most inspired design. I still wouldn’t call the S21’s design “inspired,” but it’s a lot more attractive than its predecessor. I wasn’t sure about what Samsung calls the Contour Cut housing for its rear cameras, but after a few days with my lavender-and-rose unit, I’m sold. 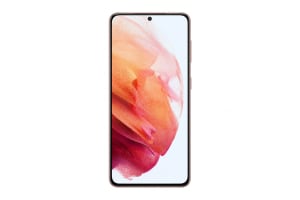 In addition to being pretty, the extra bit of metal that wraps around the top left corner is a huge improvement over the floating hump from older models. Because it doesn’t sit flush, this still leaves the surface of the rear uneven, but it’s less pronounced. Yes there’s still a slight wobble when you place the S21 on a table, but it’s much less noticeable than the S20.

The new flagship is also roughly the same size — it’s just as tall and thick but a hair wider. At 171 grams (0.37 pounds) it’s also 8 grams heavier than its predecessor. This was surprising, since I was expecting the S21’s polycarbonate body to be lighter than the last model’s glass-and-metal. Despite the change in material, the S21 still feels premium and sturdy. In fact, I prefer it to the OnePlus 8T and the Pixel 5, which weigh 188 grams and 151 grams respectively.

While the S21’s 6.2-inch AMOLED panel is the same size as its predecessor, it has a lower 2,400 x 1,080 resolution. That’s less sharp than even the iPhone 12, which with a 6.1-inch screen and a 2,532 x 1,170 resolution offers higher pixel density. But I didn’t notice much of a difference while I read articles and scrolled through my Instagram feed, though. Honestly, the 120Hz refresh rate is a much bigger deal than pure pixel density — all it takes is five minutes with the Pixel 5’s 90Hz screen (or the iPhone 12’s 60Hz one) to make that clear. And now you no longer need to scale down the resolution to enable it — for better or worse.

When you enable the higher refresh rate, by the way, Samsung is doing work on the back end to adjust the speeds between 48 and 120Hz depending on what you’re doing. Frankly, I didn’t notice a huge difference — everything seemed to scroll smoothly. What I did notice was how vibrant images and videos looked on the S21. I excitedly shared a picture I took to Instagram, lauding the great colors in a lovely sunset, only to realize later when looking on a Pixel 5 that it wasn’t as rich.

Samsung also added a new Eye Comfort feature to the S21 series that will automatically adjust blue light output based on what you’re doing. I only noticed it working at night when the screen became a little yellow, as if I had turned on a low-intensity filter, but otherwise this feature stayed out of the way. I played Two Dots for hours on the S21, and my eyes never felt fatigued, though, they don’t when I play on other phones, either.

A quick last note on the screen: Samsung uses a new ultrasonic fingerprint scanner in the display here that’s 1.7 times larger than the S20’s. This is Qualcomm’s 3D sonic sensor (Gen 2) that’s supposed to be able to recognize two fingers at once, but Samsung doesn’t appear to have implemented that feature. For now, it does seem slightly easier to unlock the S21 than older models simply because there’s a bigger target.

Unlike the S21 Ultra, which has a quad-camera setup on the back featuring a 108-megapixel main sensor and a pair of telephoto lenses, the S21 only has three cameras: a 12 MP primary sensor, a 12 MP ultra-wide and a 64 MP telephoto. That telephoto only supports hybrid optical 3x zoom, too, compared to the Ultra’s 3x and 10x optical zooms.

That difference in hardware means that the S21 only offers an up to 30x “Space Zoom,” as Samsung likes to call it, instead of the 100x on the Ultra. That’s fine by me — never in my life have I ever felt the need to zoom in on a subject 100x, and I doubt most people have either. The superior lenses on the Ultra also offer slightly better quality when you’re between 3x and 10x zoom. On the S21, pictures beyond 10x zoom were muddy. But I did find the feature occasionally useful. I was able to find out what brand of toilets were being installed in the building going up a few streets away. I still wouldn’t post most of these images to Instagram, but I could see this being useful in very specific scenarios.

One improvement Samsung did make here is offer a Zoom Lock feature that helps minimize shake when you’re at 20x zoom and beyond. When you’re at that level, a box appears on the viewfinder’s top left, and tapping it sets the boundaries of the scene. As my hand shook, the scene remained stable, and I needed to move the phone fairly deliberately to shift away from the locked frame.

Space zoom aside, I enjoyed the versatility of the S21’s triple-camera setup. Getting a shot of the cityscape from my window and switching sensors to get wider and closer views was fun. With the new Director’s View mode, too, you can get a live preview of what each camera sees and choose your favorite. Director’s View also works for video capture and I filmed both a beautiful sunset and my reaction to it from the selfie camera simultaneously. As I was recording, I could switch between views by tapping the corresponding thumbnail on the right. This is probably more useful for TikTok and Instagram posts, though it isn’t supported on those apps natively. You’d have to shoot a video with Samsung’s camera app and upload your clip.

Some other updates that Samsung highlighted are improved Single Take and Night modes, and for the most part they feel incremental. There’s also new bokeh and lighting options in the Portrait mode which Samsung says uses AI and 3D depth analysis for more accurate outlines and effects. Honestly, I found most of these tweaks negligible — the software still can’t apply a natural blur around the wisps of hair around my head, but lowering the intensity helped minimize the difference.

Aside from all the new features, the S21’s cameras are mostly decent. Pictures and selfies were clear and colorful, and I sometimes couldn’t tell them apart from photos I shot with a Pixel 5. Google’s flagship still takes much sharper and cleaner photos, especially when you’re scrutinizing the details. But Samsung’s cameras will be good enough for most users and, at least on paper, are comparable to the iPhone 12’s triple-sensor setup. The OnePlus 8T, meanwhile, has a 5 MP macro camera instead of a telephoto option and adds a 2 MP monochrome sensor to the mix.

One surprising thing that sets Samsung’s flagships apart from the competition is the software. I generally prefer Google’s Pixel UI, and with One UI 3, Samsung made some tweaks to mimic that experience. For one thing, the page on the left of the home screen is now Google’s Discover feed, which is much cleaner than Samsung’s Bixby-infested Daily.

The Gallery app and its built-in editor are also more useful than stock Android’s, thanks to nifty video editing and screenshot tools. On the S21, if you enable Labs when you’re editing a picture, you can use the new Object Eraser to get rid of unsightly things in the background. As someone who lives with unavoidable clutter, I loved the promise of this feature. You tap things you want to remove, and the system will highlight it in purple. When you’re done picking what you want to clear, hit Erase and they’ll be replaced by auto-generated “background.”

The effectiveness here depends largely on your scene — if the background is quite clean with few patterns and your object has an obvious outline, this tool works very well. But for things like a cardboard box sitting in my doorway, the S21’s eraser was… fine. It removed the box but the background had visible streaks. This is understandable though, the same feature in Adobe Photoshop still leaves similar marks.

Another bonus is the Samsung Free app (previously called Samsung Daily) that lets you watch TV channels, read certain publications and play some games for free. I didn’t think this would be that compelling until I found myself binge-watching Kitchen Nightmares one night while I browsed Reddit. There are dozens of channels available, including Paramount Movie Channel, AMC Presents, MTV Pluto, ION Plus and TV Land Sitcoms. You can watch these on your phone, fullscreen or picture-in-picture, and for now I don’t see a way to cast them to my Google TV. It’s a small and possibly underrated feature but is nice to see especially at a time when every company is trying to sell you a new streaming service.

As I’m in the US, my S21 came with a Snapdragon 888 (with 8GB of RAM and 128GB of storage). Elsewhere, you might get a version with the Exynos 2100, and users around the world have complained about previous Exynos phones’ poor performance and battery life. Those of us in America have little to worry about — this is Qualcomm’s top-of-the-line CPU and it delivers predictably blazing performance. I recorded the screen while playing with various portrait blur and lighting modes and jumped in and out of a TV show with no lag.

In general, the phone stuck around for a day and a half (sometimes even two days) before needing a charge. On our video rundown test with adaptive refresh rates on, the S21 managed 15 hours and 17 minutes with the same 4,000mAh cell as its predecessor. That’s better than the S20, which clocked just over 12 hours, as well as the OnePlus 8T and the Pixel 5, despite both of those packing larger batteries.

Battery life will of course suffer if you’re using things like 5G and high refresh rates more, so I expect to get closer to a day of use whenever I travel again. The S21 is also one of the first devices to offer the new WiFi 6E standard that taps new spectrum for higher speeds and capacity. Since I don’t have a compatible router, though, I wasn’t able to test this.

Unsurprisingly, the S21 is a good phone. It has a powerful processor, a lovely screen, capable cameras and a long-lasting battery. It even has some useful software and a gorgeous new design in eye-catching colors. At $800, the S21 is more reasonably priced than its stablemates. If you prefer a pure Google experience and want to save $100, the Pixel 5 may be good enough for you. But the S21 has a more versatile camera setup and faster processor, making it the best Android phone for the money.