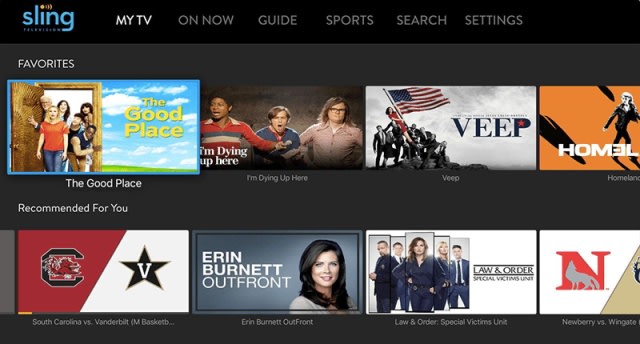 One day after Google increased the cost of a base YouTube TV subscription to $65 per month, Sling TV says it will maintain the price of its streaming service for one year. As part of a new limited-time promotion, both new and existing customers won't see the price of the company's $30 per month Blue and Orange subscriptions increase before August 1st, 2021. The catch is you need to have an active account with Sling TV before August 1st, 2020.

"We believe now is not the time to make our customers choose between staying informed and entertained and putting dinner on the table," said Michael Schwimmer, the president of Sling TV. "Our hope is this 1-Year Price Guarantee will bring a sense of much-needed stability in a time that feels uncertain to us all."

Alongside the price guarantee, new customers can take advantage of two other promotions. Until July 6th, you can sign up for a 14-day trial. Additionally, If you agree to pay for three months of Sling Blue or Sling Orange in advance, the company will give you a complimentary AirTV 2 media box. The AirTV 2 lets you stream local TV channels to your other devices.

Obviously, Sling is trying to paint itself as the good guy in this situation, but the fact of the matter is that streaming TV platforms don't have much control over how much their services cost. The cost of streaming TV services has steadily increased over the last couple of years because of how networks bundle their channels. When a company like Google signs a new deal, it often has to carry a network's entire lineup of channels. That's something that's become a significant issue for the industry. When Sony shut down PlayStation Vue last year, it said "expensive content and network deals" played a big part in its decision.

In this article: Dish, Sling TV, av, streaming, cord cutting, internet, playstation vue, television, youtube tv, streaming tv, news, entertainment
All products recommended by Engadget are selected by our editorial team, independent of our parent company. Some of our stories include affiliate links. If you buy something through one of these links, we may earn an affiliate commission.