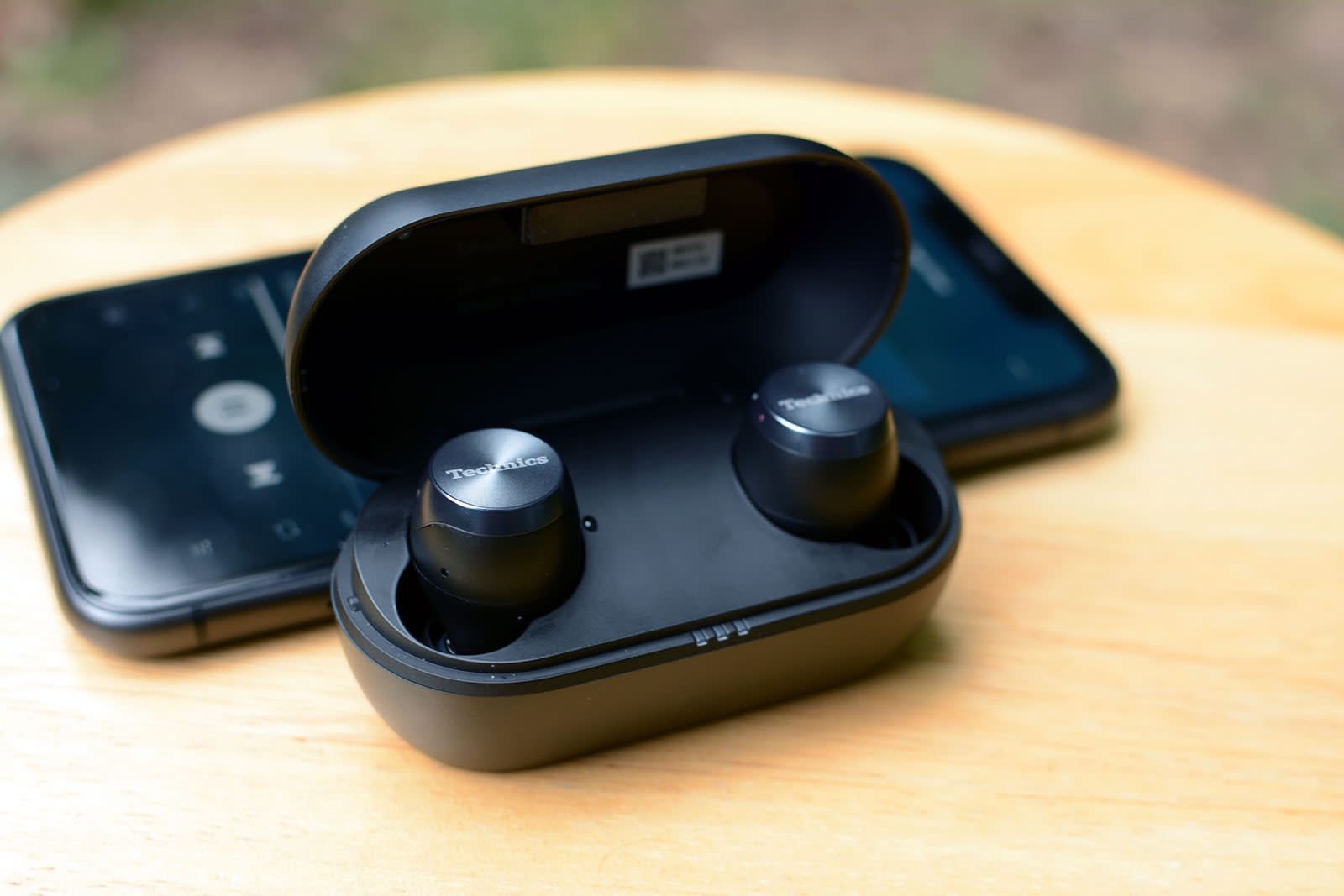 Technics isn’t name that’s synonymous with headphones, especially true wireless earbuds. The brand is better known for decades of quality turntables. But Panasonic is leveraging that good will to cater to the latest headphone craze. The EAH-AZ70W ($250) is the first set of true wireless buds to carry the Technics name. And while there’s a lot to like, these aren’t without their shortcomings. They’re affordable, especially for a flagship product, but that might not be enough to sway the masses.

It’s difficult to bring too many design flourishes to true wireless earbuds, but Panasonic managed to give the EAH-AZ70W a dash of the Technics aesthetic. The earbuds come in either black or white, with both having a silver touch pad for the onboard controls. And there’s the iconic lettering on the outside, in case there’s any doubt about their pedigree. The top of the charging case is brushed metal with an etched logo to give it a refined look, even though the rest of the accessory is plastic. 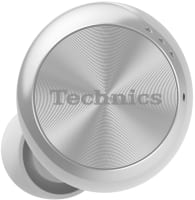 The shape of the earbuds themselves is standard fare. They’re reasonably-sized circles. These are considerably smaller than what Sony offers, for example, but they’re deeper than the tiny Jabra Elite 75t or Galaxy Buds+. That extra room accommodates an acoustic chamber that Panasonic says is “precisely designed to control air flow.” In theory, it improves the sound quality and bass response, but we’ll get to that later. I’d classify the EAH-AZ70W earbuds as medium-sized: they’re not too big, but they’re not so small that people won’t notice them sticking out of your ears.

The touch controls themselves are reliable, but less intuitive than on other sets. A single tap on either side for play/pause is the norm, but volume controls are all on the left while track controls are on the right. Double tap to increase volume, triple tap to lower it. To skip to the next track, tap twice, or three times to go back. They all work just fine, but Panasonic has its own take on how to organize things here, which might be awkward at first. Lastly, press-and-hold gives you access to your voice assistant on the left or sound modes on the right. Those audio settings cycle between active noise cancellation (ANC), ambient sound and off (neither is active).

Like most flagship wireless earbuds, the EAH-AZ70W connects to a companion app for additional features. The software displays the battery level for each bud individually and offers  access to Ambient Sound Control and Sound Enhancement -- the EQ and audio profiles. With the former, the app gives you sliders for both ANC and ambient sound, so you can adjust the level of each to suit your environment. Of course, you can turn them both off if you like, but it’s nice to have the ability to tweak things here, instead of just all or nothing.

The only potential issue with ambient sound is there’s no quick attention mode here. Some earbuds and headphones have the ability to quickly pause or reduce volume so you can have a brief conversation. Panasonic does not. There’s also no automatic pausing, so if you need to have a chat, you’ll have to manually pause the music (if you have ambient sound active) or remove the earbuds entirely.

There are only two Sound Enhancement presets: Bass Enhancer and Clear Voice. Panasonic does offer a manual EQ where you can adjust the sliders as you see fit. Across all of those options, the changes are subtle. But the bass boost option muddies the sound, especially if you’re listening to something with booming low end like hip-hop.

Overall, the audio is a bit of a mixed bag. There’s some good clarity and detail in the mids and highs. Things like hi-hats and synths are punchy and clear. The low-end is where the EAH-AZ70W struggles. There is really nice bass at times. It thumps in a way that a lot of true wireless earbuds struggle. However, that tone is too boomy with some genres, and it cancels out that pleasant clarity. It’s inconsistent though. Some tracks on Run the Jewels’ RTJ4 sound great, with pulsing basslines that drone through the songs while details like snare drums and cymbals cut through. Vocals are also very prominent, which can be good or bad depending on the song. Tracks like “The Ground Below” sound more like a mangled mess when others -- like “Walking in the Snow” and “JU$T” -- are deep and clear.

I can’t quite put my finger on the issue here. The bass definitely starts to crowd out the other elements, especially the mids. I was able to correct this to an extent with EQ, but the sound still feels compressed compared to the audio on Sony’s WF-1000XM3 and Sennheiser’s Momentum True Wireless. The EAH-AZ70W does much better with music that isn’t as bassy. Whether that’s  folky acoustic jams, indie rock or synth heavy electronic tunes. But even with those styles, the vocals are too prominent for my taste. So while the instrumentation does indeed sound better on these buds with those genres, the overall audio quality is still hit or miss. The folksy rock of Jason Isbell and the 400 Unit’s Reunions, for example, is a delicately layered mix of guitars, drums and bass -- the basics of southern rock and blues. But the EAH-AZ70W pulls all the air out of that album, and leaves it feeling flat and the vocals overpower the rest of the mix.

Unfortunately, the battery life is also disappointing. Panasonic promises 6.5 hours of listening time on the buds themselves. Sure, this is likely as long as you might need in one shot, but the competition is averaging around 10 hours nowadays. Five or six isn’t great, especially on a set of premium earbuds. During my tests, the EAH-AZ70W lasted 15 minutes less than the stated figure (6:15) before I had to return the EAH-AZ70W to their case. And that’s listening almost entirely at full volume. The included case does offer two additional charges for total play time of 19.5 hours before you’ll need to plug in the entire package. And you’ll have to reach for a USB-C cable, since the EAH-AZ70W doesn’t support wireless charging.

Panasonic is also touting call quality on the EAH-AZ70W. The company says the combination of “high-performance” MEMS (micro-electromechanical systems) mics and a unique cabinet design reduce noise and maintain consistent clarity. The microphones are also beamforming, so in theory they should focus on your voice instead of picking up the chaos around you. During my tests this worked as promised: the earbuds picked up my voice more prominently than the background noise for the person on the other end of the call. The overall audio quality wasn’t noticeably better than other earbuds, but there was more attention given to my voice.

Even at $250, the EAH-AZ70W isn’t a super attractive option. Mostly because Sony’s WF-1000XM3, which remains our top pick for true wireless earbuds, is regularly available for under $200. Even at full price, that model is $230. Sony also recently debuted the WF-SP800N: a feature-packed set that offers a lot of what makes the 1000XM3 so great for just $200. It doesn’t have all the bells and whistles, but Sony’s powerful adaptive noise cancellation and the ability to use 360 Reality Audio are both there. If price is no concern and audio quality is paramount, Sennheier’s Momentum True Wireless 2 ($300) is a solid alternative. They’re pricey, but they sound amazing. The downside is the ANC isn’t nearly as good as what Sony offers.

Panasonic built a set of well-designed earbuds with the Technics EAH-AZ70W. They’re also easy to use, once you get used to the layout of the onboard controls. Bluetooth connectivity is rock solid and has solid range so you can move freely without having to always bring your device along for a trip across the house or to take your pup outside. However, the EAH-AZ70W doesn’t handle all genres of music equally well, and the results can vary widely based on what you’re listening to. The earbuds cover a lot of the basics, but could greatly benefit from some fine-tuning.