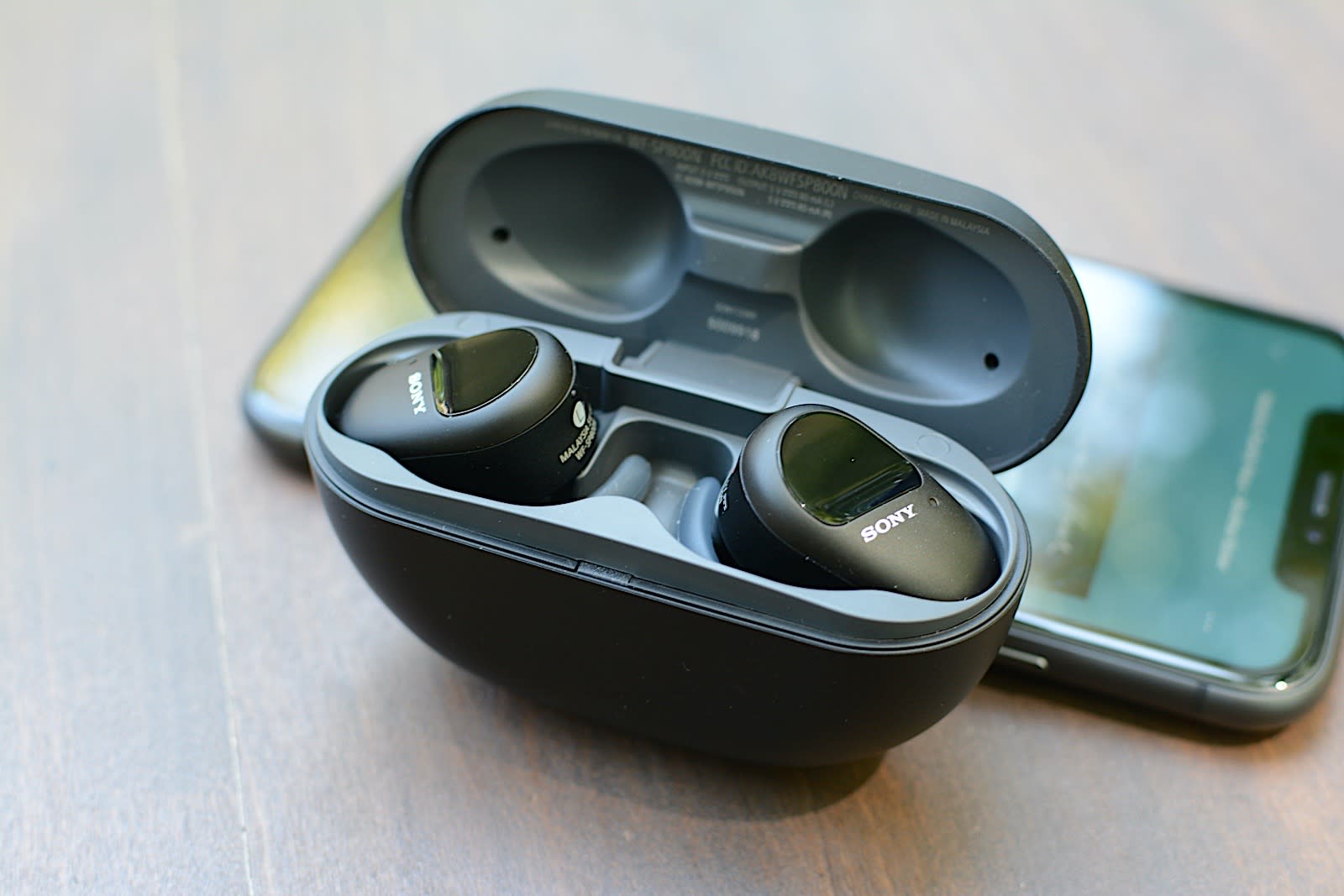 Sony has been on quite a run, at least in terms of headphones. The company's two 1000XM3 models -- the over-ear WH-1000XM3 and the true wireless WF-1000XM3 -- have remained our top picks in their respective categories for months. And its non-flagship models are hits too. The company has introduced more-affordable options in different styles that might not offer all the flashy features but are solid performers nonetheless. This spring, Sony unveiled a long overdue update to its sports true wireless earbuds: the WF-SP800N ($200). They run $20 more than the previous model, but given the long list of upgrades, the price increase is more than justifiable.

The most obvious difference between the WF-SP700N and the new WF-SP800N is the refined design. The 700s came in a range of colors, including a bright yellow model that screamed, “I’m runnin’ here!” There were less-intense options, but they still looked overly sporty. The aesthetic wasn’t subtle, and you’d never feel comfortable wearing them in the office. Sony took a lot of the design cues from the pricier WF-1000XM3 and tweaked them for this WF-SP800N.

The overall shape of the earbuds is very similar to the WF-1000XM3. The touch pad for the onboard controls isn’t a circle on the WF-SP800N, and there’s a removable “arc supporter,” or fit wing. Once you take that piece off, it’s hard to tell Sony’s new midrange and current high-end true wireless earbuds apart.

All of these similarities aren’t necessarily a good thing though. The WF-1000XM3 earbuds are large, and they stick out of your ear a considerable amount. Companies like Samsung, Jabra and others are slimming down their true wireless earbuds, but Sony is staying the course. There’s also a considerable amount of the earbud’s weight that sits outside of your ear, which can become a burden during longer listening sessions. Simply put, they’re not as comfortable as some of the competition that’s either smaller, lighter or both.

Unlike Sony’s other new true wireless model, the WF-XB700, the WF-SP800N does work with the company’s handy Headphones app. Here, you’re able to do basic things like manually adjust the EQ or select from a smattering of sound presets. It’s also where you can reconfigure the onboard touch controls to suit your needs. By default, track controls are on the right side, with ambient sound, noise cancellation and Quick Attention mode on the left. There are no onboard volume options out of the box, and to get them, you’ll have to sacrifice some of those other functions. You’ll also have to decide if you want Google Assistant or Alexa access too, so you really do have to be selective here.

The Headphones app also allows you to employ Sony’s powerful Adaptive Sound Control that we enjoyed on both the WH-1000XM3 and WF-1000XM3 (and other models). This feature is basically smart noise cancellation that automatically adjusts the active noise cancellation (ANC) and ambient sound level based on your activity: Staying, Walking, Running or Transport.

With the WF-SP800N, that Adaptive Sound Control has become even more powerful. When these earbuds were announced, Sony also revealed that this feature would now adjust itself based on your location. You can have specific settings for home, work, school, gym and any other place you want. Simply register the location with your phone’s default map app (Apple Maps, in my case) and you’re all set. Of course, there’s a key trade-off: You have to give the Sony Headphones app access to your location at all times for this to work. Even if you pass on the location tools, the aforementioned activity-based Adaptive Sound feature works well and gives the WF-SP800N some of the best ANC you’ll find on true wireless earbuds.

One more thing about the noise cancellation: The WF-SP800N doesn’t have the same QN1e ANC chip as the WF-1000XM3. Sony didn’t go into specifics, only saying that the component that powers the pricier model isn’t inside these. The company was also clear that the WF-SP800N doesn’t support the DSEE HX software on the WF-1000XM3 that upscales MP3 and AAC audio “to near high-resolution sound quality.” However, this new model has Sony’s Extra Bass chops, so there’s an emphasis on deep, rich, low-end tone.

Here’s what all that techspeak boils down to: The WF-SP800N sound really good for a set of $200 true wireless earbuds. I’m talking about the kind of sonic strength I typically hear on much more expensive models. The audio is big and full, with bass that booms when it should and takes a backseat when a track demands it. Electronic and synth-heavy music shine. I especially enjoy the thump from the drum machine and bass lines on the latest Purity Ring album. It’s not only low-end that has depth and detail but also mids and highs, so you can hear the intricacies of other instruments.

Hip-hop, rock and metal also sound really good, and you get stellar detail in softer genres like bluegrass and jazz. Across the board, there’s punchy bass that the WF-1000XM3 doesn’t have. Don’t get me wrong, the 1000XM3 sounds great, it’s just that the tuning is more balanced there. Since the WF-SP800N is more sports-focused, the Extra Bass tuning will help you keep the energy up during a workout. Honestly, I prefer the sound here to the 1000XM3. While those pricier earbuds are better suited for a variety of uses, I like the tone of the WF-SP800N slightly better.

The WF-SP800N is also compatible with Sony’s 360 Reality Audio. The dimensional sound format hasn’t exactly taken off since its official launch last fall, but (some of) Sony’s headphones are probably the best place to use it. It does require a high-res streaming plan from the services that offer access, like Deezer or Tidal. Plus, the music selection is limited, so you likely won’t have access to all of your favorites. You’ll also have to snap some pictures of your ears during the initial setup. I think Sony’s WH-1000XM3 does a better job transmitting 360 Reality Audio than earbuds, but you can definitely tell the difference on the WF-SP800N. Like I noted during my Echo Studio review, there are more presence and depth to the sound, which does enhance that dimensional quality of the music.

Sony says you’ll be able to get nine hours of battery life out of a charge with the WF-SP800N. That’s three hours more than with the WF-1000XM3. During my tests, I had no problem hitting that figure. In fact, the WF-SP800N still had some gas in the tank at the nine-hour mark. If you disable ANC, the company says you can stretch the play time to 13 hours before you’ll need a charge. The only annoyance is that the app was displaying 50 percent battery when I knew that couldn’t be true. Sure enough, a few minutes after one of my status checks that displayed the same figure, I got a low-battery warning.

One downside to the battery life is the case only holds one additional charge. Sony also did this on the WF-XB700, but the case for the WF-1000XM3 holds three. It’s not necessarily a dealbreaker, but it is something to be aware of. The case also doesn’t support wireless charging. That’s not super surprising, but compatibility with Qi-certified accessories is becoming the norm for true wireless earbud cases. It does offer a quick-charge feature, though, that will give you an hour of listening time in 10 minutes.

As far as Sony is concerned, the WF-SP800N is its midrange choice. It sits between the $130 WF-XB700 and the $230 WF-1000XM3 in the company’s current lineup. While the WF-SP800N may not have the same powerful internals as its pricier sibling, it has a lot of the same features, including Adaptive Sound Control. And compared to the WF-XB700, the audio quality on the WF-SP800N is a lot better. There’s a massive leap in performance all around. The only way I would recommend the WF-XB700 over these is if you needed to stay around $150. If that’s the case, the Galaxy Buds+ ($150) are probably the better choice, especially with their iOS compatibility. Another option in the $200 range is the Jabra Elite 75t ($180). They don’t have near the audio chops as the WF-SP800N and there’s no ANC, but they cover almost all the rest of the bases. Plus, they’re tiny and comfy to wear for hours at a time.

Sony may have positioned the WF-SP800N as the midrange option in its lineup, but these earbuds punch above their weight. The powerful noise cancellation that adjusts automatically isn’t a standard feature that a lot of companies offer. And the audio quality is very good overall, which isn’t guaranteed when you get under the $200 mark. If you’re willing to deal with a somewhat awkward fit, the WF-SP800N is much more than a set of sports earbuds. It’s also one of the best sets of true wireless earbuds you can buy right now.

Update 5/18/20 5:02PM ET: This review has been updated to clarify the WF-SP800N are not compatible with LDAC technology.