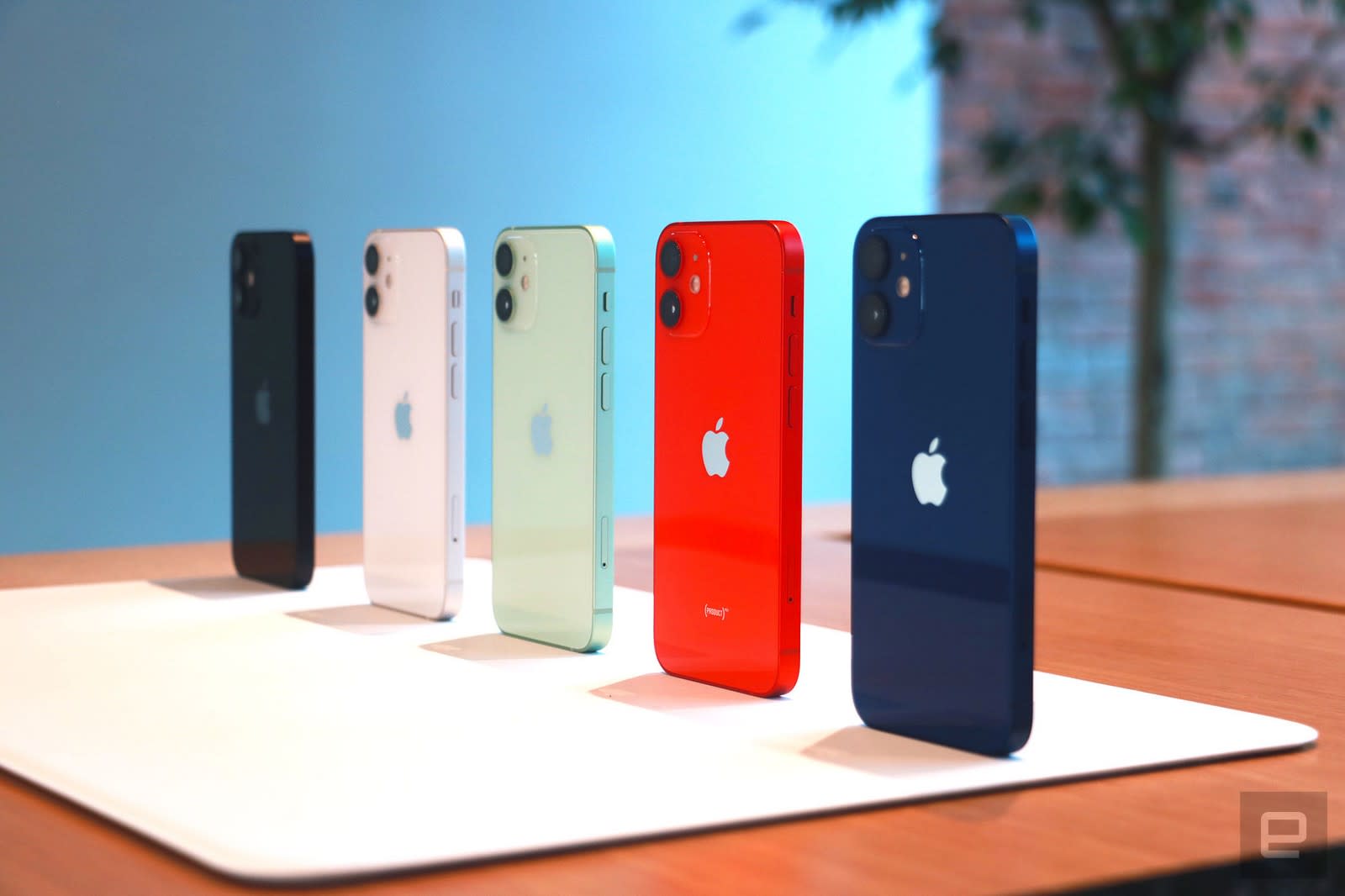 What to expect at Apple’s iPhone 13 event

Nothing radically different seems to be on the horizon for next week.

In just a few days, Apple will be hosting an event that we’re all but certain will be the iPhone 13 launch. The company sent out invites earlier this week that featured the words “California Streaming,” which of course led many of us in the industry to speculate like crazy what surprises might be in store. My money is on new TV+ or Apple Music content, while others are guessing game streaming or a cloud-based macOS might be possible. But as always, we already have a good idea of what to expect thanks to analysts, leakers and FCC filings. Here’s a selection of the more-credible leaks that have been swirling around so you can catch up on all the iPhone 13 rumors ahead of the September 14th keynote.

Just as there were four iPhone 12 models last year, we’re expecting the same number of iPhone 13s next week. This was pretty much confirmed by an FCC filing about upcoming MagSafe updates, which didn’t name them but referred to four “New Phone” items in addition to the existing generation. Those four devices are most likely the iPhone 13 mini, iPhone 13, iPhone 13 Pro and Pro Max, and I’m personally glad Apple is keeping the baby iPhone around.

As early as February this year, rumors of the new iPhones featuring Always On displays have been floating and have only gained traction since. This would allow Apple to constantly have the time and other system indicators appear on your lock screen. Another popular rumor suggests the next iPhones will have smaller notches, and that a 120Hz screen is coming to the Pro model. If that’s true, Apple would be catching up to Samsung, though Google still hasn’t hit that high of a refresh rate on its flagships yet.

With the potential Always On display and faster refresh rates, battery life could be a concern for the new flagships. But it sounds like Apple might be mitigating that by using lower power LTPO (or Low-Temperature Polycrystalline Oxide) screens and bigger batteries. There’s also talk of an in-display fingerprint reader coming to the iPhone 13 line, though the reports on that are less consistent. It’d also be weird since the main iPhone series, haven’t had a Touch ID sensor since the iPhone X was launched in 2017.

Beyond their screens, the iPhones are also expected to get some camera upgrades. On the hardware front, we’re reportedly getting improved ultra-wide cameras across the lineup, with better sensors and lenses. As for imaging software, Apple is supposedly adding an automatic astrophotography feature and a portrait video mode that could blur out the background while you film. Samsung already offers this on its S21 series, so it’ll be interesting to see how the two compare.

A surprising recent rumor suggests the iPhone 13 might even support satellite communications, which could let you make emergency calls if you’re out of a typical cellular coverage area. This would be a unique feature in modern smartphones, and almost hard to believe. But the report said Apple would be using a modified Qualcomm radio to enable this, meaning the components could already be easily available, making it more possible this is coming this year.

Externally, the phones aren’t expected to look significantly different from their predecessors, other than a potentially “gripper” texture on their backs. Reports seem to agree that the lightning port will remain, and that the updated MagSafe charger (and the phones) will have stronger magnets to prevent accidental slippage.

Finally, as we’ve been referring to it throughout this article, the next generation is most likely going to be called the iPhone 13. Not the iPhone 12S or the iPhone 14, because apparently Apple is not superstitious. Which is cool. Courage.

In addition to new phones, it’s also quite likely that we’ll see new Apple Watches next week. Specifically, we’re expecting the company to unveil the Watch Series 7 with larger cases and screens.

Some reports suggest the new wearables will also sport thinner bezels, a flatter design, a faster chip and updated “ultra-wideband functionality,” which might improve its communication with doors, locks and other devices. And that’s about all we’ve heard so far.

According to various sources, anticipated features like a body-temperature sensor or blood sugar monitor won’t be ready for this year’s Watch. Those waiting for a rugged variant will also probably have to wait till 2022 at least.

Speaking of waiting, we’re coming up on about two and a half years since Apple launched the AirPods 2nd gen in 2019. It took about the same amount of time for the company to introduce the follow-up to its original wireless earbuds, though, so it’s very likely we’ll see the next generation come September 14th.

At some point, rumors suggested they might arrive earlier this year. We’re now well into the 2nd half of 2021, and all we’ve seen of the third-generation AirPods is a photo leaked in February. The image is purportedly of the regular model, not the Pro, and includes the device’s carrying case. The holder appears wider than the second gen’s and the buds seem to have an in-ear design similar to the AirPods Pro. That fits with other rumors swirling around.

Beyond what can be seen in the picture, the source 52Audio also claimed that the third-gen AirPods would support active noise cancellation and spatial audio. That contradicts an earlier Bloomberg report that said those features wouldn’t make it. The Bloomberg story did say the AirPods would offer a new chip and longer battery life, though.

Those three product lines seem all but guaranteed to show up at next week’s launch, but let’s not forget about the iPad. Apple’s next entry-level tablet should be the iPad 9 and multiple reports from sources like Digitimes and Bloomberg’s Mark Gurman suggest that it’ll arrive this month alongside the iPhones. An iPad mini 6 is also supposedly on the horizon.

In general, rumors indicate that the iPad 9 is going to look quite similar to its predecessor, with a somewhat thinner design and slightly bigger screen. The more noteworthy upgrades are likely to be internal, with faster chips and more RAM being a popular speculation. If Apple does launch a new tablet next week, these incremental improvements do seem like a given. It’s also possible that the iPad 9 may offer MagSafe support, though since a slate wasn’t mentioned in the FCC filing I mentioned earlier, this seems unlikely.

As for the iPad mini 6, it appears as if a redesign might be in the works that would make the compact tablet look more like the M1 iPad Pro, with thinner bezels and a squarer design. It could also come with a USB-C port instead of Lightning, as well as a potential Smart Connector for keyboards and other accessories.

That’s a whole smorgasbord of Apple devices that might be unveiled next week, as the company readies new products for the upcoming holiday shopping season. But there could still be more surprises up its sleeve. Though a new Apple TV was already launched earlier this year, based on the words California Streaming on the invitation, we’ll probably hear about new shows coming to TV+. Plus, Bloomberg’s Gurman also wrote in a newsletter that he’s expecting a redesigned MacBook Pro between September and November this year, which means it could be announced alongside the iPhones. Or maybe Apple is saving that for another event later in the year.

Whatever you might be most interested to see come September 14th, it’s clear Apple has plenty to show off. We’ll be hosting a live show on the Engadget YouTube channel when the event is over, so that we can all be disappointed or excited together with you in real time. I hope you’ll come hang with me and UK Bureau Chief Mat Smith and have some fun then!