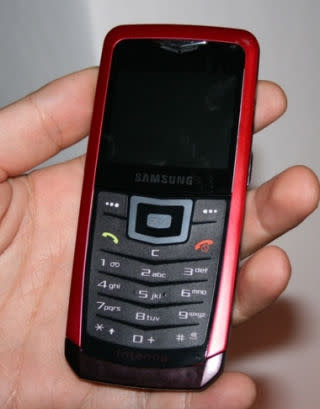 In the cellphone game, just how thin is too thin? If you're Samsung, the answer apparently lies somewhere south of the 5.9 millimeters put up by its latest fashion accessory, the appropriately named "Ultra Edition 5.9." For the record, that's a solid millimeter less than the previous world's thinnest, Samsung's own X820 -- the phone allegedly shown snapping helplessly in two on video under fairly minimal pressure. Of course, the authenticity of said video has been repeatedly called into question, but either way, we're hoping this new one has been fabbed with some pretty crazy space-age resins and polymers that'll keep it from multiplying in our pockets. Specs include a tri-band GSM radio (though recent announcements have us encouraged that an American version could be down the pike), a 3.2 megapixel cam, Bluetooth, and 80MB of onboard storage. Look for the record-smashing Ultra Edition 5.9 to start gracing European pockets bulge-free some time in March.

[Thanks, Tony]
In this article: 5.9, candybar, edge, gsm, mobile, samsung, thin, thinnest, ultra edition, UltraEdition, world's thinnest, World'sThinnest
All products recommended by Engadget are selected by our editorial team, independent of our parent company. Some of our stories include affiliate links. If you buy something through one of these links, we may earn an affiliate commission.
Share
Tweet
Share