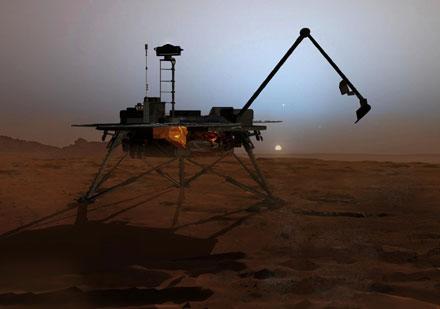 Dear Phoenix lander, you always find new ways to both delight and torture us. We listened anxiously for your updates about the weather on Mars, watched you "think" your way out of nearly fatal situations, and marveled at your liquid discoveries. It seems like only yesterday we were preparing for your send off. And what new violence is this you're doing upon our souls? Oh, that's right: you're dying. Not shutting down. Dying. Not quickly, either. And you're going to suffer from what is essentially a NASA-induced nightmare terminal case of Alzheimer's now, too. As early as tonight, the NASA team will upload repeating commands designed to "wring a few additional weather measurements" out of Phoenix by placing it in "terminal science mode," meaning that the lander will repeat the same sequence of actions over and over again, every day before shutting down for 19 hours. The team has also discovered that the craft is now unable to fully recharge its batteries, causing it to lose its memory each night when it shuts down. So the lander wakes up in the morning, does some science, goes to sleep, wakes up again, doesn't remember a thing, does some science... oh, you get the idea. The Phoenix team doesn't know how much longer the lander is going to survive, but they indicated that it could be "several weeks." Please, just let the pain end. Hit the read link for the long, sad story.
In this article: mars, mars lander, MarsLander, nasa, phoenix, phoenix lander, PhoenixLander, space
All products recommended by Engadget are selected by our editorial team, independent of our parent company. Some of our stories include affiliate links. If you buy something through one of these links, we may earn an affiliate commission.
Share
Tweet
Share