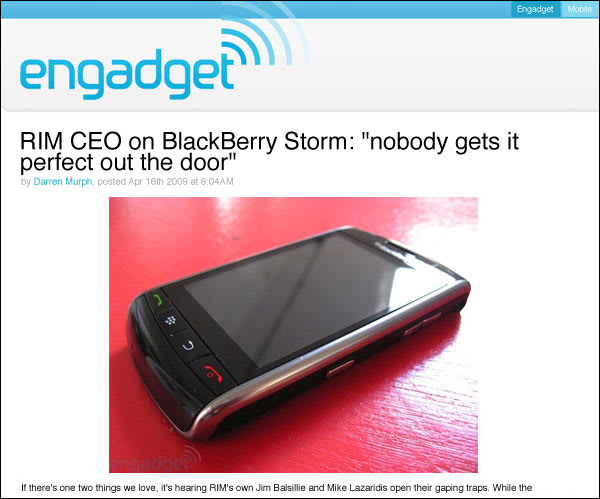 Welcome to 'This day in Engadget', where we crack open the archives and take a whimsical look back at the memories and moments of our storied past. Please join us on this trip down random access memory lane.


Earlier today, RIM CEO Mike Lazaridis laid down a doozy when he implied that full touchscreen phones aren't that popular -- but last year at this time (on April 16th!) he was scrambling to explain why the BlackBerry Storm failed to live up to high expectations. Speaking to Laptop, Mike explained that the Storm was RIM's first "touch product," explaining that "nobody gets it perfect out the door." RIM's head honchos are well known for their candor, so it's no surprise that he's now talking trash on tablets. Still, you have to admire any company that proclaims buggy software the new reality, right?

Also on this date:

April 16th, 2009: Apple hit back at Microsoft's Laptop Hunter ads, Nokia's profits were reported to have dropped 90 percent in the first quart of the year, a hellraising carrier pigeon was reported to have been caught red handed smuggling cellphone parts into a prison, and a new atomic clock claimed to be the most accurate in the world.

April 16th, 2007: A few screenshots of Leopard Beta 9a410 shocked the internet, Microsoft admitted it was possible the Xbox 360 was scratchin' discs, Vonage admitted it was pretty much screwed, and the RED ONE got a hands-on.

April 16th, 2006: Noelle the Robot gave birth (sort of), a Darmouth professor was reported to have invented instant de-icing film, and the Toshiba HD-A1 HD DVD player got disassembled, possibly predicting its death.

April 16th, 2005: Future-minded peeps started thinking past Tiger, the AirScooter II was shown off, and a disgusting Hello Kitty (seriously, this thing couldn't have been officially licensed) BE@RBRICK set was unleashed.

April 16th, 2004 : Phil Torrone showed us how to read RSS feeds on an iPod, the man behind Nokia's N-Gage got interviewed, and mobile social networking seemed like something that could take off.
In this article: blackberry, meta, Mike Lazaridis, MikeLazaridis, rim, storm, this day in engadget, thisdayinengadget
All products recommended by Engadget are selected by our editorial team, independent of our parent company. Some of our stories include affiliate links. If you buy something through one of these links, we may earn an affiliate commission.
Share
Tweet
Share