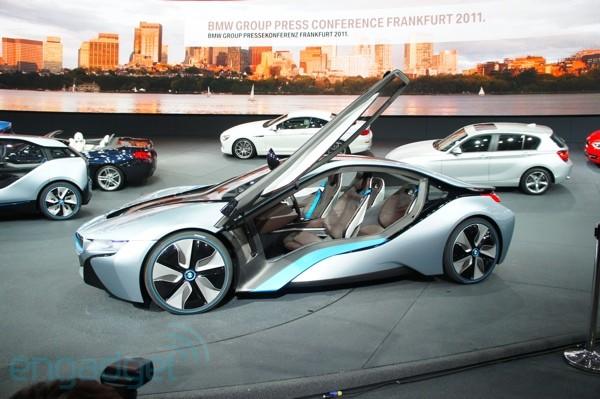 We've seen 'em as sketches and we've seen 'em having fun on the snow, but now, after getting a few upgrades, they're parked on the stage at Frankfurt. BMW rolled out its new i3 and i8 electric cars, part of a new sub-brand focused on efficiency and responsive driving -- though it'll ultimately be up to the driver to determine just how responsively these behave on the road.

The i3 is a pure electric, 150km range (about 100 miles) and a very lightweight construction of both aluminum and carbon fiber. The i8, meanwhile, is a plug-in hybrid that is said to deliver about 87MPG and yet still get from 0 - 60MPH in under five seconds. Spunky, then. It also sports those funky laser headlights that are both far more efficient and far more awesome sounding than current LED models. This is what they look like in the flesh, and if all goes according to plan you'll be seeing them for yourselves when they enter production in 2013. 9
In this article: bmw, bmw i, BmwI, electric, frankfurt, frankfurt motor show, frankfurt motor show 2011, FrankfurtMotorShow, FrankfurtMotorShow2011, i, i3, i8, phev, plug-in, plug-in hybrid, Plug-inHybrid
All products recommended by Engadget are selected by our editorial team, independent of our parent company. Some of our stories include affiliate links. If you buy something through one of these links, we may earn an affiliate commission.
Share
Tweet
Share