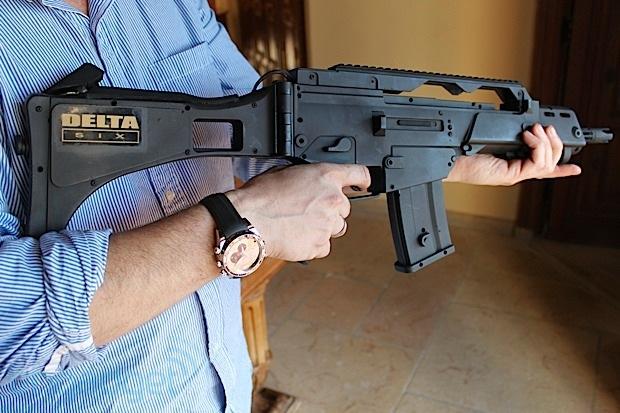 Glimpses of the Delta Six have been teasing an ultra-realistic and motion-enabled gaming controller since last fall, and now that it's back on Kickstarter, we've gone hands-on with a prototype to see just how it handles. Though hardware and software tweaks have been made since it first surfaced, its creator David Kotkin says the peripheral is roughly 80 percent complete. For example, the beta version we took for a spin was only compatible with the Xbox 360, but the final product is set to play nice with the PS3, PC and Wii U, in addition to next-gen consoles via a software update.

Hold the matte black prototype in your hands, and you'll notice it has a fair amount of heft to it. Its weight didn't take an immediate toll on this editor's arms, but some light fatigue was noticeable after about 20 or 30 minutes of play. The hardware is actually a stock airsoft gun that's been gutted and stuffed with Xbox 360 controller parts, a rechargeable battery and an Arduino. According to Kotkin, the faux firearm's code will be made open source, and users will be able to program it to their heart's content. Wielding the gun with both hands means reaching out with your left arm to cup the stock and resting a thumb on an analog stick. In addition to moving the camera left and right, the thumbstick is in charge of making in-game characters walk forward and backward. Under the same hand's middle and ring fingers sit two buttons in charge of chucking in-game grenades. A d-pad and a repositioned Y Button lie on the center left-hand side of the model weapon, followed by start, select and the Xbox 360 Guide button. Underneath the middle of the rifle is the ammo clip, which acts as the X Button when pushed in, and handles reloading.

On the blaster's grip are the A and B Button equivalents, which are positioned to fall under a user's middle and ring fingers. Naturally, the trigger is reserved for the index finger. Located just above is a switch that would normally control automatic and semi-automatic modes, but it's been remapped to the run function. Below the gun's leg hides a USB port for updating the onboard micro-controller.

Finally, a button on the butt of the shooter triggers the "hold your breath" action to steady an in-game weapon when pressed against your arm or shoulder. Atop the controller sits an infrared sensor which activates a game's zoom in or scope function when it detects a user's looking down the barrel. As for that detachable scope, it's primary function is window dressing. The button layout can be confusing at times, but Kotkin says they're working on a way to make everything distinguishable.

Before you get to mowing down digital opponents, you'll have to wade through game menus first, which is currently a chore on the Delta Six. Since the embedded gyroscopes are used along with the d-pad and analog stick for navigation, selecting the right menu option feels akin to whack-a-mole -- unless the controller is held impossibly still. However, Kotkin admits the navigation isn't up to par, and vows that its kinks will be hammered out in a final product.

Jumping into gameplay, our first instinct was to move the gun around and get our bearings with the camera, but it was immediately apparent that swinging to the left and right had no effect. It turns out that the unit we were testing only had motion controls mapped for moving the camera up and down, and relied solely on the analog stick for changing the horizontal view. Full motion control of all camera views, however, has been tested with the hardware before, Kotkin says, and it's planned for the final version.

As for the motion control that was there, the experience was fairly responsive, though not particularly speedy. While sensitivity can be adjusted for each game, it seems that the sweet spot is the lowest notch, as higher levels were far too finicky. When going up against zombies with a slow and deliberate trod, the Delta Six got the job done. However, with faster enemies, gangs of baddies and close quarter fights, combat got dicey, as swiftly and accurately aiming at opponents around us became difficult. Our suspicion is that may be alleviated when full motion controls are baked in, but we certainly could have faired better with a traditional controller at the time.

To trigger a melee attack, we simply moved the gun's end towards the screen as if we were bashing an opponent. It might not be as quick a tapping a button, but it works as planned -- not to mention we didn't accidentally trigger it during our play session by jostling the rifle about. Rounding out the motion controls is strafing, which can be done by tilting the controller left and right. Again, the feature worked like a charm, and wasn't something we accidentally activated during normal play.

While the idea of moving forward and backward in-game with an analog stick on the side of a gun controller seemed unintuitive at first, its execution turned out to be practical. Merely point the analog stick toward the screen or away from, and off you'll go. Thankfully, the reloading mechanism has been simplified since the peripheral's debut. Instead of having to remove and insert the ammo cartridge, giving it a firm jab suffices.

The trigger feels much like those on Xbox 360 controllers, and though the built-in rumble wasn't working on the prototype, the polished product will be outfitted with the kickback sensation. Steadying your in-game weapon by pulling the butt of the rifle works as promised, as does zooming in or looking through the scope by leaning your head toward the rifle's stock. The built-in IR sensor does a bang-up job of quickly activating and deactivating the zoom function, making the whole affair a breeze.

Despite its shortcomings in prototype form, the Delta Six shows promise, but it needs crowdsourced cash to reach its full potential. An asking price of $159 doesn't exactly make it an impulse purchase, but Kotkin hopes his track record will inspire confidence in prospective backers. The Miami native points to his experience bringing a raft of inventions to market -- including the Avenger Controller -- and a previous Kickstarter project where he tooled and delivered products in eight weeks. If all goes well, the Delta Six will be shipping out to supporters in black or white flavors with an orange tip this December.

In this article: controller, crowdfunding, DavidKotkin, DeltaSix, gun, hands-on, handson, video
All products recommended by Engadget are selected by our editorial team, independent of our parent company. Some of our stories include affiliate links. If you buy something through one of these links, we may earn an affiliate commission.