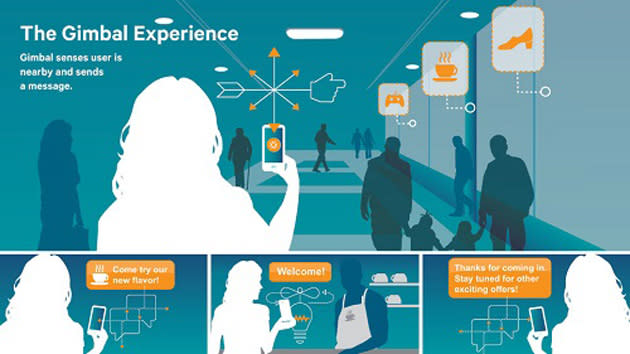 Short-range location services are all the rage these days, but they're nothing without the Bluetooth beacons that make them possible. Qualcomm is fulfilling that behind-the-scenes need today by releasing its Gimbal proximity beacons. Both the tiny Gimbal Series 10 and the weatherproof Series 20 let shopkeepers offer area-based discounts and information to customers as they wander through stores, with position accuracy down to one foot. They only support Apple devices for now due to iOS 7's native iBeacon feature, but Qualcomm also promises that Android support is on the way. Stores may not mind the limited utility, though, since the beacons are so cheap. Series 10 beacons cost as little as $5 each when bought in bulk, while the Series 20 costs $10; either way, they're trivial costs if they lead to a few more impulse buyers.

In this article: android, beacon, bluetooth, gimbal, ibeacon, ios, location, mobilepostcross, qualcomm, shopping
All products recommended by Engadget are selected by our editorial team, independent of our parent company. Some of our stories include affiliate links. If you buy something through one of these links, we may earn an affiliate commission.