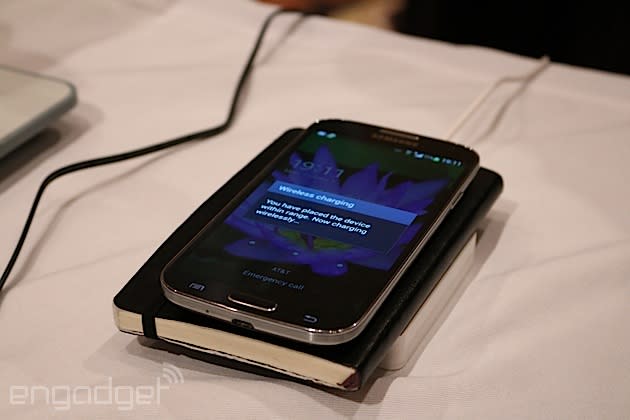 Qi is one of the most popular wireless charging standards out there, but it's certainly not perfect -- and its limitations have been a burden that its competitors like the A4WP Rezence have taken advantage of. One of its most pressing issues is the fact that it only supports inductive charging, which means you need to stick your phone or tablet directly on the charging pad in a very specific fashion, lest you wake up in the morning to a dead device. The WPC has been working on righting that wrong, however, because it's come to Vegas with resonance charging prototypes. The new transmitter is able to charge any Qi device from up to 18 millimeters away and through obstructions; it's backwards compatible, so older phones and tablets are included. Reps weren't able to give us an estimated time of arrival, but the prototype was definitely convincing enough, which tells us it shouldn't be too far away. As we expected, the transmitter we saw tonight is less efficient than a standard inductive charger -- it's currently at around 65 percent -- but we were told that this wrinkle is a result of this early unit and will continue to improve as the tech develops. 6
In this article: ces, ces2014, hands-on, mobilepostcross, qi, resonance charging, wireless charging, wpc
All products recommended by Engadget are selected by our editorial team, independent of our parent company. Some of our stories include affiliate links. If you buy something through one of these links, we may earn an affiliate commission.