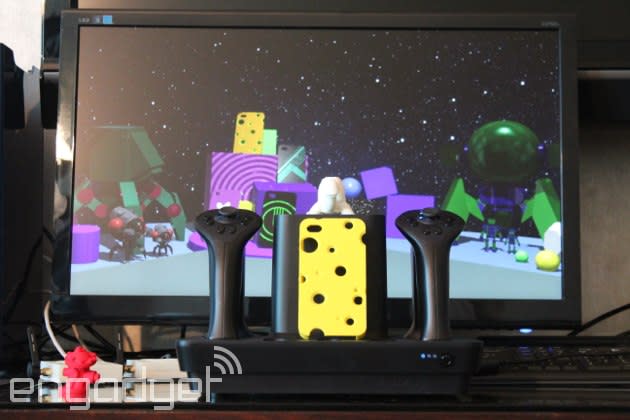 The last time we saw Sixense's Stem motion controller, it was little more than a collection of prototypes. The company showed us a gaggle of Plexiglas boxes containing reference hardware and a 3D-printed shell representing the final product's design. A more functional third unit (a developer kit, actually) allowed us to play with the controller's electromagnetic tracking technology, but the overall experience was fragmented and incomplete. The company finally pulled these disparate elements together, revealing the final Sixense Stem System at CES earlier this month.

We caught up with the company earlier this month to take a look at the revised controller, and found a solid, lightweight controller modeled very closely after the 3D-printed mockup we saw last year. In fact, the only major difference we found was the revised button layout: We were originally told the device would utilize a modular faceplate system, but the final version wears a symmetrical button configuration reminiscent of the Razer Hydra. Sixense hadn't met up with us merely to show us the completed Stem System, however -- it was rearing to show us MakeVR, the firm's homegrown virtual reality 3D modeling software. The MakeVR project has actually been around about as long as the Stem, but its development hasn't been nearly as public. Sixense sells the program as an evolution in 3D modeling interfaces, a chance to step back from the complicated, menu-laden CAD programs modelers use today and replace them with a more natural interface. By casting the modeling program in a virtual environment with 1:1 motion controls (provided by Sixense's own Stem, naturally), MakeVR hopes to make digital modeling as easy as playing with Legos, shallowing the learning curve to make it palatable to a consumer market.

Picking up the Stem System for the first time, we saw firsthand how easy it was to manipulate shapes and objects. By mirroring the position of the user's hands, MakeVR creates a workspace that's more like working on a shop bench than in a CAD program. Objects can be lifted, twisted and observed as if they were held in your palm, lending a tactile element to a digital experience. The program even attempts to integrate its option menus in a natural way, placing settings and import, export and data-saving options on a virtual tablet. On a computer monitor, this seems a little strange, but it's the kind of interface that shines in virtual reality. In fact, it meshes quite well with Oculus' best practices documentation. This much we already knew -- Sixense has been quietly shopping around the modeling interface for awhile now -- but the company did have a few new things to show us. The latest build of the program features a collaborative mode, a multiplayer workspace that allows up to five modelers or observers to interact in the same virtual environment. Users can pass objects between each other, work on the same model simultaneously, or simply observe, point, gesture or talk to each other as if they were in the same room. This collaborative modeling experience is designed to foster a more personal work environment, allowing partners to work together in a virtual space over the internet or through locally connected machines. Sixense's demo setup also showed off one of the Stem System's more convenient features: base sharing. Two PCs, each using their own pair of Stem controllers, were able to use the same Stem System base unit as the reference point for tracking motion, meaning that offices using MakeVR and Stem controllers would need to invest in fewer bases than workstations.

Although MakeVR has the precision tools and ability to build high-resolution models, Sixense told us that it's geared more for consumers and hobbyist makers than the professional arena -- but why would the average consumer want to fiddle around in 3D modeling software? Well, it turns out the company has an answer for that too: 3D printing. Sixense has partnered with Shapeways to allow the users to export their work to the 3D printing service from within MakeVR, providing consumers with an easy-to-use, streamlined suite for visualizing, creating and ordering objects of their own design. Sending objects off to the printer is easy too; MakeVR provides a trio of cubes measuring 12cm, 6cm and 3cm. Fit your object in the desired box, and you're ready to print. As we watched our hosts create a toy fire hydrant and a coffee mug in mere minutes and send them to the printer, it was easy to visualize the utility of the integration. Can't find the perfect gift for your grandmother's birthday? Just make it. MakeVR might not be the perfect program for everybody, but the shallow learning curve and stellar 1:1 motion-control integration certainly make it appealing to anyone picking up Sixense's Stem system. The early build we saw wasn't quite ready for prime time, but the potential for a creative virtual reality playground is certainly there. Unfortunately, Sixense hasn't announced the software's price or release date, and only told Engadget to stay tuned -- a Kickstarter campaign for the program is launching on February 5th.

In this article: 3d modeling, hands-on, makevr, sixense, stem, stem system, video
All products recommended by Engadget are selected by our editorial team, independent of our parent company. Some of our stories include affiliate links. If you buy something through one of these links, we may earn an affiliate commission.