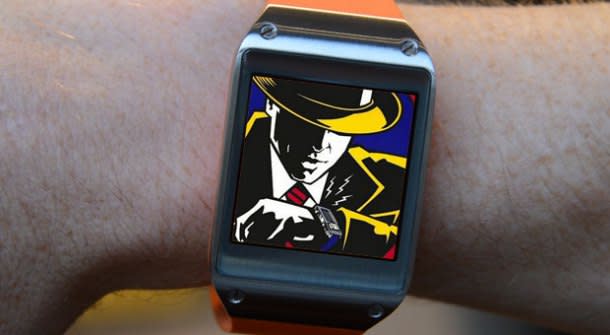 If recent trends are any indication, there are two roads that lie ahead for smartwatches and the companies foisting them upon us: the all-you-can-eat, tracker + smartphone approach and the single-minded focus on health and wellness bands. One meanders off to a fuzzy horizon laden with disregarded Dead End signs, a jumble of features and an overload of quantified-self data. And the other... well, that narrowly focused path to wellness simply falls off a cliff. It's not because dedicated health and wellness devices have no place in the wearables market -- right now, they do. It's because that area of lifestyle tracking will inevitably be consumed by the smartwatch borg as a subset of ancillary features. And yet, here we are -- about to enter into the irrevocable phase of mobile technologies as wrist-worn wearables with questionable (for now) benefits. A future we'll preview more intensely at this year's Mobile World Congress in Barcelona as some big-name manufacturers unveil their in-development takes on what can currently be described as redundant lifestyle tech.

Am I being dismissive of a new technology? Not quite. It's more realism than pessimism at this point; a perspective made that much stronger by the faults of existing smartwatches. I own and gave what I consider a fair shake to Sony's SmartWatch 2. The end result being yet another device left to whiten under an accumulation of dust somewhere in my apartment. There's just no room in my everyday life for another product to charge, let alone one that offers mere previews of the fully fledged functions on my smartphone. I don't need a smaller, second window into my connected life, nor do you. That already exists and you're probably holding it in your hand right now. The four to five inches of which allow us a greater range of motion, input and screen real estate for actual, meaningful productivity. You see, efficiency should be the hallmark of smartwatches, not the clumsy duplication the category currently engenders.

I don't need a smaller, second window into my connected life, nor do you.

It doesn't have to be this way, though. Manufacturers just need to train their focus on three key areas to turn the smartwatch into a viable fourth pillar of lifestyle tech: design, display and battery life. Namely, we need wider, "always on" displays that offer high pixel density and look good doing it -- the latter of which Pebble's already addressing with Steel. Think your smartphone in landscape mode (but blessedly thinner thanks to advances in flexible display tech) strapped to your wrist and with a two-week charge. Sounds a lot more appealing than the two inches-or-less window to a preview that Pebble, Samsung and Sony have cobbled together, doesn't it? It's not that far-fetched a concept either, especially now that flexible displays (exhibit A: LG's G Flex) and energy-sipping screen tech like Qualcomm's Mirasol are making their way to market. That extra horizontal space wouldn't just enable a more natural reading experience for texts, emails and social communications; it'd also make way for a less-cluttered app layout and the use of QWERTY software keyboards. Wouldn't you like more room to read your messages and reply from your wrist? More space to precisely select icons and input text? Maybe even the ability to watch videos in 16:9 format?

It seems like I'm asking a lot, but really that's the very least we should expect from a smartwatch. And, admittedly, none of it is revolutionary. For that, we'll have to look to HTC and Apple, both of which are rumored to be hard at work on smartwatches that surpass the gimmick factor with an emphasis on lifestyle integration. HTC chief Peter Chou's even gone on record to say these devices have "to meet a need, otherwise ... it's not for people's day-to-day lives." So what is it then about smartwatches that's meaningful, and where's this hole in our everyday mobile lives we didn't know needed filling? The answer to that lies largely with contextual data.

Imagine a stylish smartwatch that blends the best of Jawbone's Up24 with HTC's One, or any other combination of high-end fitness tracker with flagship smartphone. By marrying the sensor-heavy wellness technology we see exploding within the industry right now with a first-class mobile experience on our wrists, companies could create the perfect digital assistant to slot seamlessly into our lifestyles. A device that could even control the connected homes of the future. It'd keep tabs on our movements, eating and communication habits, exposure to sunlight, temperature, sleep cycles, calendar and media consumption. Not to mention that it'd make and receive voice calls, record and display video and photos and function as a web browser, as well as a messaging hub.

Imagine a stylish smartwatch that blends the best of Jawbone's Up24 with HTC's One, or any other combination of high-end fitness tracker with flagship smartphone.

Best of all, by its very nature as a watch, it'd be constantly attached to our body -- in large part thanks to waterproofing, power management and wireless charging -- offering the most accurate overview of how we actually live. And it'd be able to quantify all of that data in a neat, assistive manner to encourage us to be that much healthier and that much wiser about maximizing our time. We'd be emboldened, not hampered, by our reliance on technology and we'd possibly be even thinner, too. We'd be more efficient soft machines.

The reality right now is that manufacturers are in a rat-race scramble for your dollars, eager to oversell the empty promises of their commercially available, yet stunted prototypes. Because, let's face it: Two revenue streams -- i.e., smartphones and their codependent smartwatch counterparts -- pad a company's bottom line better than a single well-executed product. And, quite frankly, if present-day smartwatches really could handle all of our communication needs well enough to be daily drivers, there'd be no real need for smartphones in our lives. So while Samsung, Sony and Pebble are busy kicking up as much dirt as possible to get consumers to notice their respective half-baked smartwatch takes, others, like Apple, LG, Microsoft and HTC, are working quietly behind the scenes to deliver something with actual purpose and value. Or, at least, that's the presumption based on their collective silence.

And what about Google? Surely, a Nexus smartwatch must be in the works over in Mountain View. It's an inevitability, really, made all the more possible by the company's purchase of WIMM Labs and Nest; acquisitions that brought smartwatch and connected-home tech in-house for Google. Besides, do you really expect those overachieving Googlers to pass up a chance to show the industry how it's done? Until then, I'll find some other, much more reasonable way to set fire to $300.

In this article: apple, editorial, galaxygear, google, htc, mobilepostcross, mwc2014, pebble, samsung, smart watches, smartwatch, smartwatch2, Smartwatches, sony, steel
All products recommended by Engadget are selected by our editorial team, independent of our parent company. Some of our stories include affiliate links. If you buy something through one of these links, we may earn an affiliate commission.