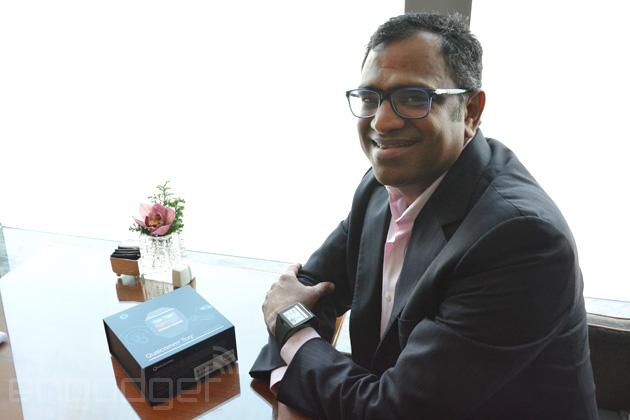 Qualcomm isn't exactly known for launching its own consumer products, but in the case of its $350 Toq smartwatch, the move makes sense for Raj Talluri, SVP of Product Management.

"Sometimes you have to build the whole thing to show what's possible," said the exec. "Qualcomm has a history of doing that."

What Talluri's referring to here is how Qualcomm's once-dormant Mirasol technology enables always-on wearable displays, while maintaining a low power consumption. This contrasts with the experience on many other LCD-powered smartwatches, which have their screens turned off while idle to save power. This pain point alone is enough to deter the average consumers.

"It's actually really nice to have something that's on all the time. You can just take a quick look at it," Talluri said. "If you have to go in and touch it, and take a look at it, and do something with it, then I think less and less people would use it."

Mirasol, on the other hand, is based on MEMS and stays on while sipping much less power -- in some cases down to one-sixth of what its LCD or OLED counterpart consumes. It's also easily readable under good ambient light without the need of a backlight. The closest alternative technology is e-paper (as used by the Toq's much cheaper competitor, Pebble), which boasts similar display and power advantages but only does black and white.

As to what we can expect from Qualcomm in the near future, Talluri said right now his team's focused on bringing Mirasol and connectivity to more small form factors -- many of which will be created by its partners, like the awkwardly-named Appscomm Fashioncomm A1 watch. The exec also forecasts a continued growth in the health and fitness space; though he's not so sure whether smart glasses -- or the "stuff sticking on your glasses" -- are becoming more socially acceptable any time soon. Hence Qualcomm's focus on the "less invasive" watch form factor for now.

In this article: alljoyn, featured, features, interview, MEMS, mobilepostcross, qualcomm, rajtalluri, smartwatch, toq, wearable
All products recommended by Engadget are selected by our editorial team, independent of our parent company. Some of our stories include affiliate links. If you buy something through one of these links, we may earn an affiliate commission.