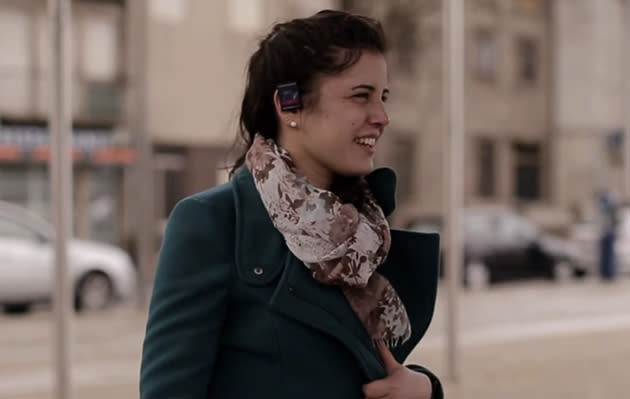 Smartwatches are a dime a dozen these days, so if you're making one and want to get noticed, you'd better have an enticing hook. And, in the case of the HeadWatch, it literally has a hook -- one that anchors the main body of the device to your ear so it can double as a sort of hands-free headset. Seeking $300,000 of crowdfunding cash through Indiegogo, the HeadWatch is standard wearable fare, mostly. It's an Android-based, touchscreen smartwatch that acts as a companion for your smartphone, with a few frills like notification light strips and a temperature sensor thrown in.

Now, the "watch" descriptor isn't entirely accurate, as the main body of the thing is removable, making the strap more of a preferred mount than anything. On the underside of the watch face is that hook we mentioned, and presumably a speaker/mic setup allowing you to use it in headset mode. Making and taking calls on watches is far from a new idea, but if you'd rather not broadcast over loudspeaker, then we don't see why you'd opt to move HeadWatch from wrist to face in favor of, you know, just getting your phone out of our pocket. Perhaps we're just old-fashioned. Anywho, early bird pledges of $184 (including shipping) will get you a HeadWatch IOU, but as it looks to be barely past the (strange) concept stage at this point, 300 grand in crowdfunding dollar seems practically unachievable.

In this article: BluetoothHeadset, CrowdFunding, headset, headwatch, indiegogo, mobilepostcross, smartwatch, video, watch, wearable
All products recommended by Engadget are selected by our editorial team, independent of our parent company. Some of our stories include affiliate links. If you buy something through one of these links, we may earn an affiliate commission.