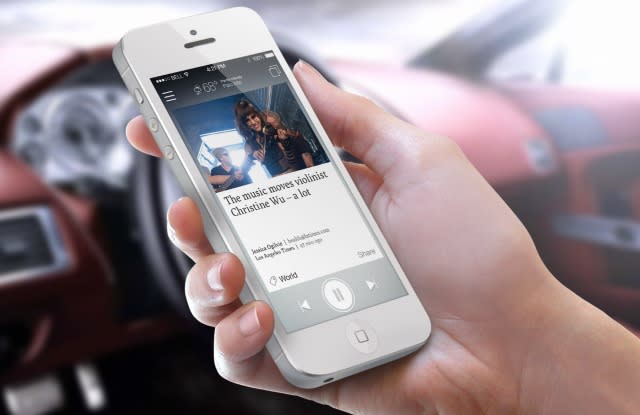 Podcasts and talk shows are perfect for your daily commute, but it's rare to find one that only covers what you want to hear about. Newsbeat, an iOS and Android app released today by the Tribune Company, hopes to change how you listen to news. The app has access to over 7,000 different sources ranging from big-time papers to smaller blogs. Before you start listening, you can tell it what types of stories and publications (cough cough, Engadget) you're interested in hearing from, and the app uses Pandora-like artificial intelligence to create the perfect newscast for you.

Each personalized program is designed to last the length of your typical commute, and kicks off with weather and traffic information based on your current location. Stories are read aloud using text-to-speech, with some important stories -- think world news like the Malaysian Airlines disappearance -- read by voice actors. Each one only lasts between 60 and 90 seconds, and news you're not interested in can be skipped. When you do skip a story, the app learns from its mistake and makes articles like that one less of a priority in the future. If you're into that whole reading thing, you can see the text version within the app or tap on a particular post to see it at its original source (or even see other publications' takes on the same news).

We had a chance to demo Newsbeat earlier this week. In general, we thought the experience sounded a lot like NPR -- that is until the text-to-speech announcer kicks in. Tribune is using an "advanced text-to-speech technology" that sounds a little more realistic than Siri, but still has a pretty solid computer-generated feel. There's no denying it's not a real person reading your news. That said, it's a slightly awkward experience we might be willing to get used to if it manages to distract us from the boredom of another 30 minutes on the gym treadmill.

In this article: Android, app, iOS, mobilepostcross, news, Newsbeat
All products recommended by Engadget are selected by our editorial team, independent of our parent company. Some of our stories include affiliate links. If you buy something through one of these links, we may earn an affiliate commission.