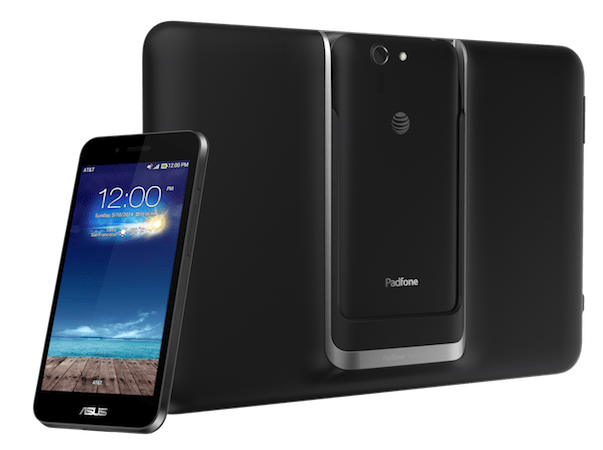 ASUS left us wanting for detailed specs when it showed off the Padfone X at this year's CES -- thankfully, AT&T (its carrier) has finally spilled the beans about the 2-in-1 device. The duo's phone component has a 1,920 x 1,080 5-inch display, a 13-megapixel rear and 2-megapixel front-facing cameras. Similar to other Padfones, this handset (when docked) transfers info over to its accompanying tablet, which in this case has a 9-inch display with 1,920 x 1,200 resolution and a 1-megapixel front camera. As we've previously mentioned, the device will be able to tap into AT&T's fledgling LTE-Advanced network, but it can also connect to the internet via WiFi and transfer files via Bluetooth 4.0.

Under the hood, the Android KitKat twofer boasts a 2.3GHz Qualcomm Snapdragon 800 chip, 16GB of internal memory (that's expandable, thanks to a microSD slot) and 2GB of RAM. Even if the phone serves as the hybrid's brains, though, they're each powered by their own battery: the handset draws energy from a 2,300mAh battery, while the tablet runs on a 4,990mAh power source. That's about the extent of what AT&T's willing to share, so we're still in the dark when it comes to the Padfone X's price and release date in the US. But, considering Ma Bell's LTE-A network is now live in some locations and ASUS CEO Jerry Shen promised a Q2 release, we'll probably hear about those details soon enough.

In this article: asus, att, lte-advanced, mobilepostcross, padfonex
All products recommended by Engadget are selected by our editorial team, independent of our parent company. Some of our stories include affiliate links. If you buy something through one of these links, we may earn an affiliate commission.