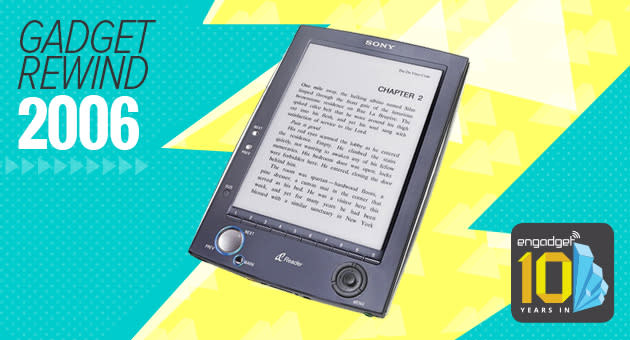 Sony may not have been at the forefront of the digital music revolution, but when it came to e-books and e-readers, the company was certainly a pioneer. It all started in the '90s with Sony's first chunky, flip-topped Data Discman. This two-pound, paperback-sized player came bundled with a selection of reference books on disc, each capable of storing up to 100,000 pages of digital text. When that cumbersome early e-book solution failed to gain traction, Sony went right back to the drawing board and returned in 2004 with the Japan-only LIBRIé e-reader. This particular device used an innovative E Ink display and relied on an e-book loan program -- a distribution model that proved unpopular with consumers at the time.

By 2006, the company was ready to try again with its Sony Reader PRS-500, a 6-inch device that used the same E ink display as the LIBRIé and boasted 7,500 page-turns worth of battery life. This time, however, consumers could actually purchase e-books to own from Sony's online store, which held around 10,000 titles at launch. The PRS-500 also shipped with a dock and USB connector in the box since downloads could only be managed by a PC and then transferred to the device.

Sony wasn't the only company trying to launch the e-reader revolution in 2006. E Ink devices like the iRex iLiad and the STAReBOOK were hitting stores around the same time. There were also rumors that Apple would try its hand at the format as well. Of course, the elephant in the room was Amazon's 2007 Kindle. Where Sony's initial release date for its Reader was pushed back by several months -- disappointing some eager customers -- the Kindle arrived on schedule and sold out online in just five and a half hours. Amazon's customers also had access to 88,000 e-books in the Kindle online store using Sprint's wireless network.

Although Amazon snagged a top spot in the hearts of e-reading consumers, Sony continued to develop its own hardware line over the years, logging more than 10 iterations and developing a loyal fan base. Despite this consistent effort, however, recent events, like the shuttering of its Reader store, indicate that Sony may be somewhat willing to cede the e-book category to Amazon. It now directs current Reader customers to the Rakuten-owned Kobo platform for e-book purchases.

This isn't the first time that Sony has pioneered the way into a new market only to lose its edge to a competitor; the same thing happened to its transistor business back in the 1950s.

Did you own a Sony Reader PRS-500? Add it to your Engadget profile as a device you had (or still have) and join the discussion to reminisce or share photos of your device with other like-minded gadget fans.
In this article: 10 years in, 10yearsin, amazon, amazon kindle, e book, e books, e ink, e reader, e readers, e-book, e-books, e-ink, e-reader, e-readers, ebook, engadget10th, ereader, gadget rewind, gadgetrewind, gadgetry, gadgets, gear, irex iliad, mobile, sony, sony prs-500, starebook
All products recommended by Engadget are selected by our editorial team, independent of our parent company. Some of our stories include affiliate links. If you buy something through one of these links, we may earn an affiliate commission.