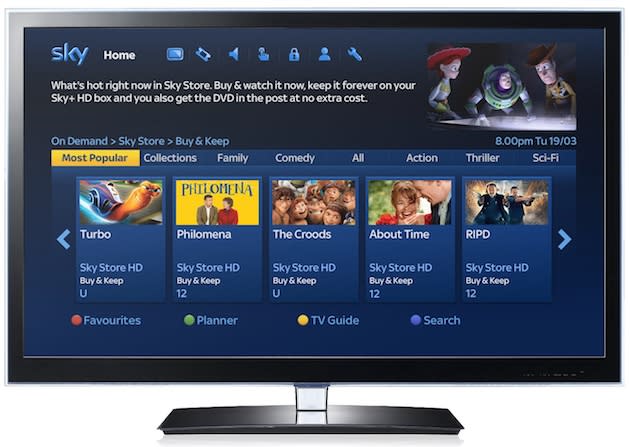 Sky's explored almost every way of serving up TV and film possible, but today it becomes a true movie retailer for the first time. The new "Buy & Keep" store Sky announced at the beginning of the month is now live, so anyone with a Sky+HD box can buy and download movies to own forever. They won't just sit on your set-top box's HDD though, as within a working week, you'll also receive a physical DVD copy through the post. Slightly unorthodox, yes, but it's likely why Sky can offer digital copies of films on the same day as the DVD release. Titles range from £8 to £14, with a couple of hundred from studios 20th Century Fox and NBCUniversal populating the store today. New movies will be added each week and TV box sets, too, albeit later. The next step for Sky is to liberate the films from your living room by adding support for tablets and mobiles, as well as adding other way to access Buy & Keep through Rokus, YouView boxes and its own Now TV puck.

In this article: bskyb, buykeep, buykeepstore, digitaldownload, dvd, films, movies, sky, uk
All products recommended by Engadget are selected by our editorial team, independent of our parent company. Some of our stories include affiliate links. If you buy something through one of these links, we may earn an affiliate commission.