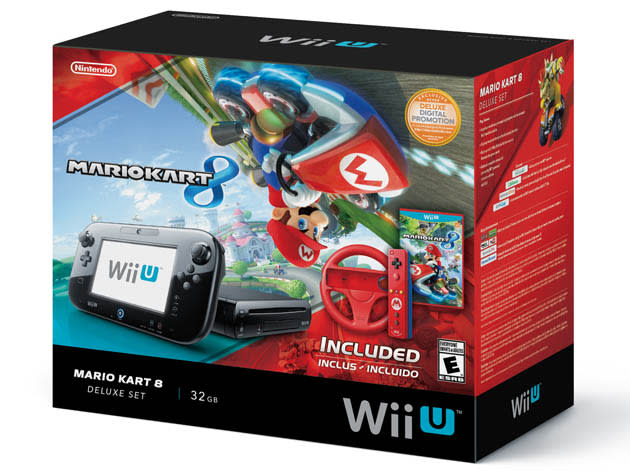 You don't have a Wii U yet, right? You're forgiven, and far from unique (in that respect, anyway -- you're a unique snowflake otherwise). Should the eighth entry in the Mario Kart series pique your interest, Nintendo's got a pretty fantastic bundle arriving at the end of May with a copy of the game, an extra Wii Remote Plus gamepad, and a free download of one of four games. All that stuff comes together in one box for $329.99 -- a pretty great deal considering the Wii U system in the box costs $300 by itself!

Head below for a new trailer for Mario Kart 8, as well as more on why Nintendo would offer a brand new game for free alongside its console.

The price isn't a measure of Nintendo trying to save you dough, but one of a company struggling to make its game console relevant against growing competition from Sony and Microsoft. The PlayStation 4's sales are already outpacing the Wii U, at 7 million consoles compared to Nintendo's 5.86 million (as of Dec. 31 2013); Xbox One isn't far behind at 5 million.

With major third-party publishers like EA and Ubisoft largely abandoning the Wii U, Nintendo's leaning on first-party software to sell the system. And that's where this Spring's Mario Kart 8 comes in, the latest entry in a series going back to the Super Nintendo era. Like Microsoft offering Titanfall bundled in with Xbox One, Nintendo is bundling a major, exclusive release with its console, and taking a hit on profits from game sales in favor of putting more Wii Us in more living rooms. The hope is, in the long run, more consoles in homes means more game / accessory sales (which is where the real money is for Nintendo).

The company also announced this week that it's going to (once again) skip holding a press conference at E3, instead opting to host a Nintendo Direct video stream.

In this article: hdpostcross, mariokart8, nintendo, nintendowiiu, video, wiiu
All products recommended by Engadget are selected by our editorial team, independent of our parent company. Some of our stories include affiliate links. If you buy something through one of these links, we may earn an affiliate commission.