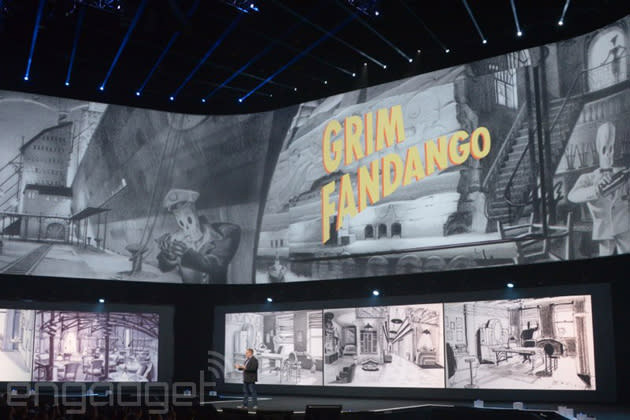 Just because LucasArts as an active game studio is no more doesn't mean that some of its original franchises are going the way of the dodo -- far from it. Double Fine's Tim Schafer has revealed at Sony's E3 event that the classic 1998 adventure game Grim Fandango will be re-released on the PlayStation 4 and PS Vita. Details of the remake aren't available just yet, but it's safe to presume that some visual upgrades are coming to Manny's journey through the Mexican Land of the Dead.

Update: Double Fine has confirmed via Twitter that the remake is also coming to PC, Mac and Linux platforms.

In this article: av, doublefine, e32014, gaming, grimfandango, lucasarts, playstation, ps4, psvita, sony, timeline16vidreboot, TimSchafer, video, videogames, vita
All products recommended by Engadget are selected by our editorial team, independent of our parent company. Some of our stories include affiliate links. If you buy something through one of these links, we may earn an affiliate commission.